Last week, I expressed surprise and delight at how "The Woman Who Fell to Earth" surpassed my (admittedly low) expectations for the Chris Chibnall era of Doctor Who. This week, alas, Chibnall more or less precisely meets expectations with a passable but entirely dismissible entry, "The Ghost Monument," directed by Mark Tonderai.

It is not that there is much particularly wrong with "The Ghost Monument"—it is a credible-enough hour of sci-fi shenanigans—but that there's little that is particularly right with it. Lacking much of anything in the way of meaning, purpose, or character arc, this is Doctor Who that does exactly what it says on the tin, no more, no less.

Risking little, and therefore achieving little, "The Ghost Monument" is an episode of Doctor Who that is "good enough." That's my least favorite kind of Doctor Who, so I'm going to keep my thoughts (relatively) brief this week.

"We're stronger together." — The Doctor

It's a shame "The Ghost Monument" turns out to be so slight, because there's evidence aplenty that Chibnall knew exactly what this episode should have been. He had the right vision, even if the execution fell a little short.

Second episodes of a new era are—or should be—getting-to-know-you stories. Within the narrative, they are about forging the new and still uncertain Doctor/Companion relationship: they tend to be about companions learning what they've gotten into with the Doctor ("The End of the World," "The Shakespeare Code") and/or about companions proving their worthiness and mettle ("The Fires of Pompeii," "The Beast Below," "The Rings of Akhatan"). They are, in short, about building trust.

(And that's true for the Creator/Audience relationship as well. Premieres are special events: they have a lot of introductions to make, they have a lot of necessary business to be getting on with, and they tend to be both paced and scaled differently than the usual story. Second episodes are more "business as usual," and it's watching them that we start to get a feel for what any era of Doctor Who is going to be.) 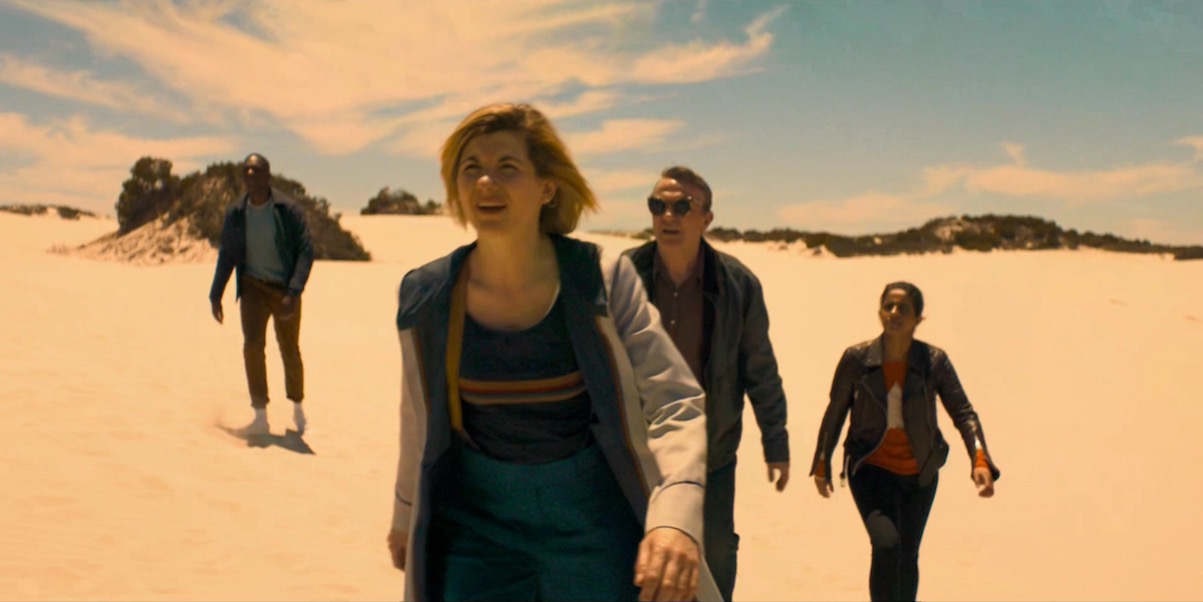 Conceptually, Chibnall's screenplay for "The Ghost Monument" seems to recognize where the story needed to go. Granted, the "plot"—which concerns the final leg of some sort of Intergalactic Cannonball Run—is barely a sketched-in excuse for the Doctor and her friends to navigate a deadly obstacle course. (Why is this race being run? And for what audience? The story neither tells us nor cares.) But that's okay: stranding our four heroes together on "Desolation"—a world in which the entire planet has been "made cruel"—should make for a pretty good trust exercise, like a team-building corporate retreat with killer robots and homicidal rags.

And Chibnall tries to get there. There is much discussion throughout, for example, about trust and teamwork. "If we stick together, if you trust me, we can get out of this," the Doctor promises her three companions. And, amongst themselves, they discuss whether they should believe her. ("Do you think she's telling the truth?") The episode culminates with the team-building exercise seeming to have worked: just when the Doctor is ready to give up, the three humans stand together in a joyous show of solidarity. "We've got each other," they say. "We've come this far, ain't we? Who says we're giving up?"

Meanwhile, selfish Epzo (Shaun Dooley) has a darkly sad story about how his mother taught him that "you can never trust anyone in this life." ("Your mum was wrong," the Doctor tells Epzo. "We're stronger together.") While Angstrom (Susan Lynch)—Epzo's fellow finalist—is doing all of this selflessly, because her family is relying on her. At the end of the race, of course, Angstrom and Epzo—under the Doctor's influence—decide to win together, declaring the contest a tie and sharing the prize.

So…"E" for effort, I guess? As an outline, what I've just described sounds like a well-structured episode of Doctor Who. The problem is, Chibnall repeatedly hits the "trust" and "teamwork" themes—with the narrative equivalent of that tiny sledgehammer that used to hang from the TARDIS console—without actually giving it any shape. No one really gets any kind of arc here. The "race" plot is the episode's least developed element, and the thin supporting characters, Angstrom and Epzo, just end up taking up space in a story that should have focused entirely on the Doctor and her new friends. (It's really nice—in theory—that Angstrom decided to share the victory prize, but Epzo was a selfish jerk throughout: what, exactly, did he do to deserve such redemption and reward in the end?) 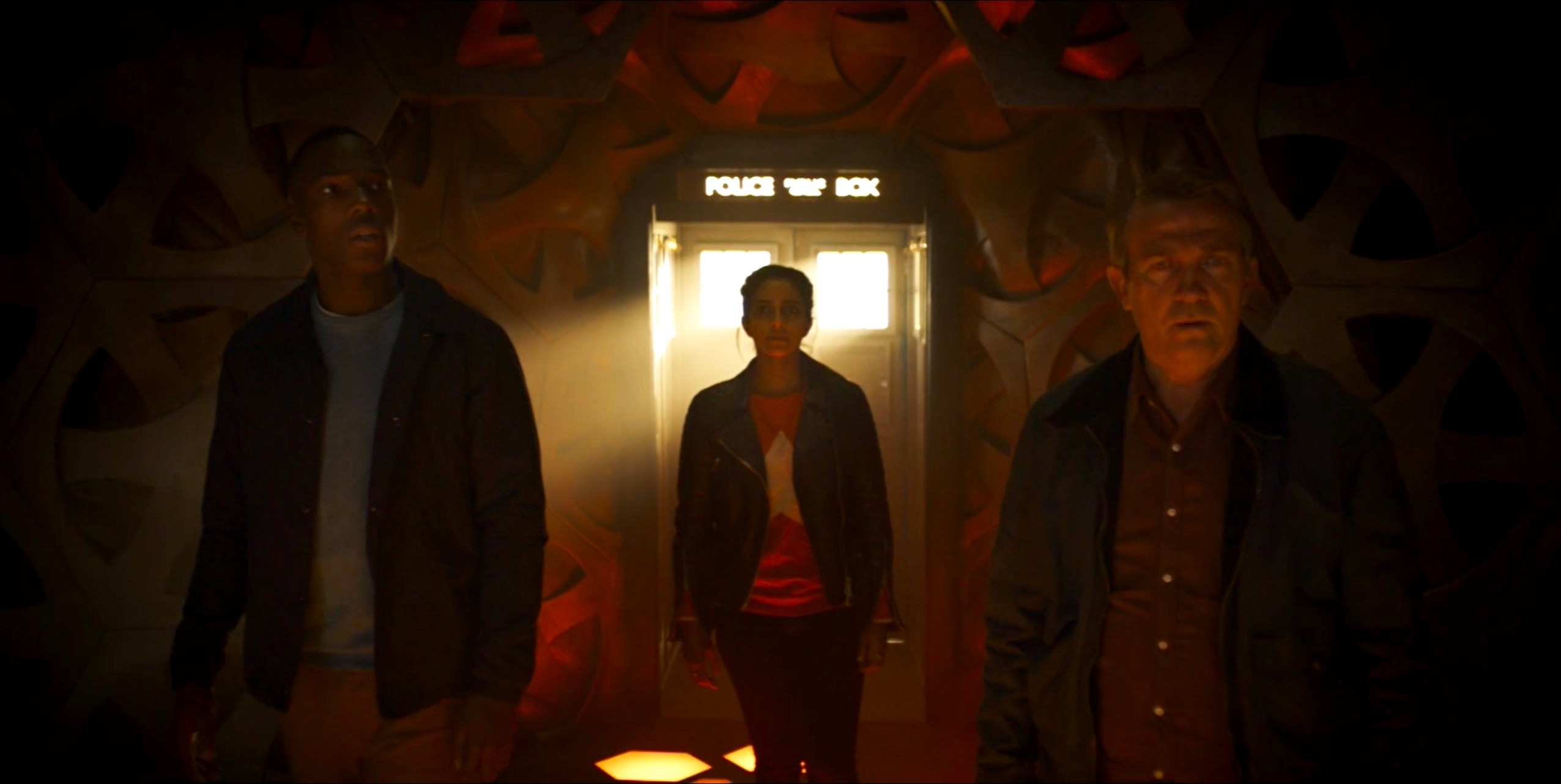 And, as a vehicle for the main crew, Chibnall's script just leapfrogs the companions to an all-trusting relationship with the Doctor, without doing the character development necessary to get them there in any satisfying way. For example, it's been a long time since the Doctor was traveling with people who did not consent to be there. How much more interesting would this story have been if at least one of them had been scared, or furious, or both? Instead, strangely, all three companions are surprisingly okay with having been accidentally teleported into the vacuum of space and then stranded on a deathtrap planet. ("These three have been very good not going on about it," the Doctor acknowledges to gamemaster Ilin [Art Malik].)

And—apart from one brief moment in which Ryan goes all Call of Duty on the robots—they all seem to trust the Doctor and follow her lead like they've been doing it for years. Which is to say, the companions all start out—emotionally—more or less exactly where they need to end up in the story. That's not an arc so much as a fixed point in space.

Nor does the episode do much to highlight who these people are, let alone why they will make good companions. This is partially a side-effect of having so many characters: there's no time to focus on any one person, or even to give any individual very much to do. (It's a problem with which the show will no doubt have to deal all season.) Graham and Ryan work together to fix a boat—illogically, since it's a solar-powered spaceboat that we assume the Doctor could have diagnosed and repaired at a glance—but otherwise their contributions are minimal. Compare any scene here to Amy Pond's saving the day in "The Beast Below," or to the incredible bonding moment that happens between the Doctor and Donna Noble at the end of "The Fires of Pompeii," and we realize that both the characters and their relationships in Season 11 seem rather shallow so far.

It is very early in the season, of course, and there is plenty of time to develop these characters and relationships properly. But I am concerned—based in part on his previous scripts—that Chibnall thinks this is what character development looks like: a line of dialogue here or there about faith and teamwork, a feint towards the suggestion of a character arc, and some minor identifying traits for each supporting character.

(Think, in contrast, how well we knew Rose, or Donna, or Amy Pond, halfway through their first episodes: how clearly we understood their personalities, and how strongly we felt the dynamic they would share with the Doctor. None of that is happening yet.)

My perennial complaint about weak Doctor Who episodes is that the writers misunderstand the fundamental nature of the show: they think it's about coming up with a quirky sci-fi plot, when really it's all about an emotional arc for the characters that just happens to work itself out around that plot. Here, Chibnall demonstrates that he understands that, but whether he can pull it off in more than a shallow way remains to be seen.

Let's move on to the bits of the episode that were better, which were pretty much all about production design.

First of all, the show looks gorgeous this season. The watchword for visuals in the Chibnall era so far seems to be "cinematic," and I wonder if this episode—with its Lawrence of Arabia-esque setting—wasn't designed to show off Doctor Who's improved cinematography, which includes filming in a 2:1 widescreen aspect ratio that makes everything feel a bit more epic.

And, of course, the showpiece of the episode is the newly designed TARDIS. With qualifications, I think I—like the Doctor—"really like it." The interior has an organic feel that hearkens back to the Eccleston/Tennant "coral" design, without aping it too closely, and its full of quirky (but not annoyingly quirky) details like the cookie dispenser and the spinning TARDIS-shaped light. 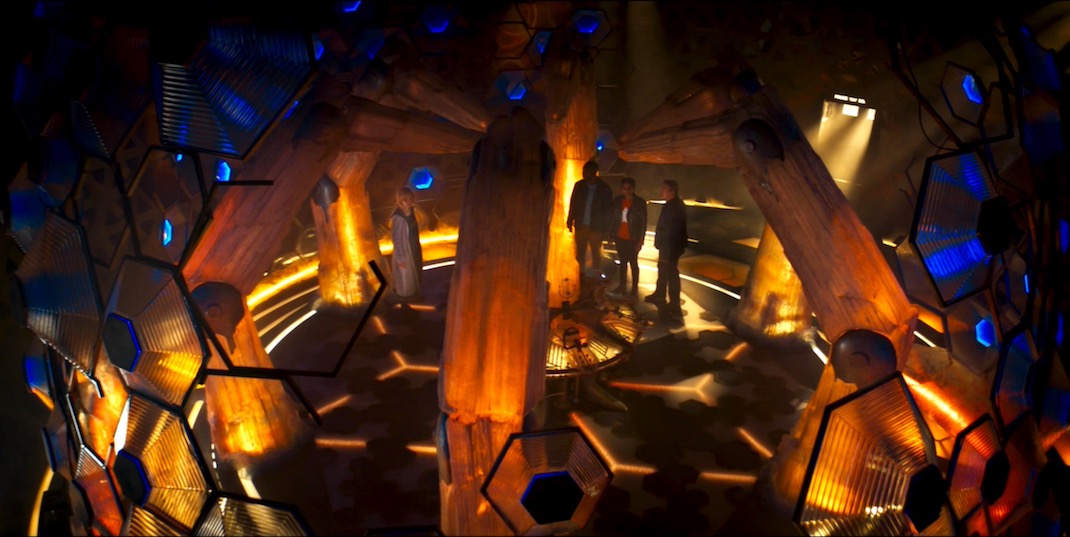 I am less certain about the front porch, which—for me—disrupts the dimensional wonder a little bit: it now looks like the TARDIS is a giant invisible ship attached to the back of a police box, instead of a giant ship contained within a police box. (No one says "It's bigger on the inside," and perhaps that's because the police box is now just a foyer.) Mostly—though I like the color scheme—I am hoping that all those lights are on some kind of dimmer switch that can be turned up when there's business to conduct in the TARDIS, because it's awfully dark.

On the whole, "The Ghost Monument" is a functional but somewhat lackluster episode of Doctor Who. It's possible that its biggest problem is simply its placement in the season: as a fifth or sixth episode, "The Ghost Monument" might have been better off. But it's a weak second episode: it fails to do the work that needs to be done at this point in the season, and it suffers considerably from being a little bit too much like "The Woman Who Fell to Earth" in its tone and structure. Doctor Who works best when a big runaround like "Woman" is followed by a quieter, more intimate piece that allows the characters room to talk and provides problems to solve that are not purely physical in nature. This is two adventures in a row that are frenetic and action-driven, and that's a bad way to introduce a new era of Doctor Who. 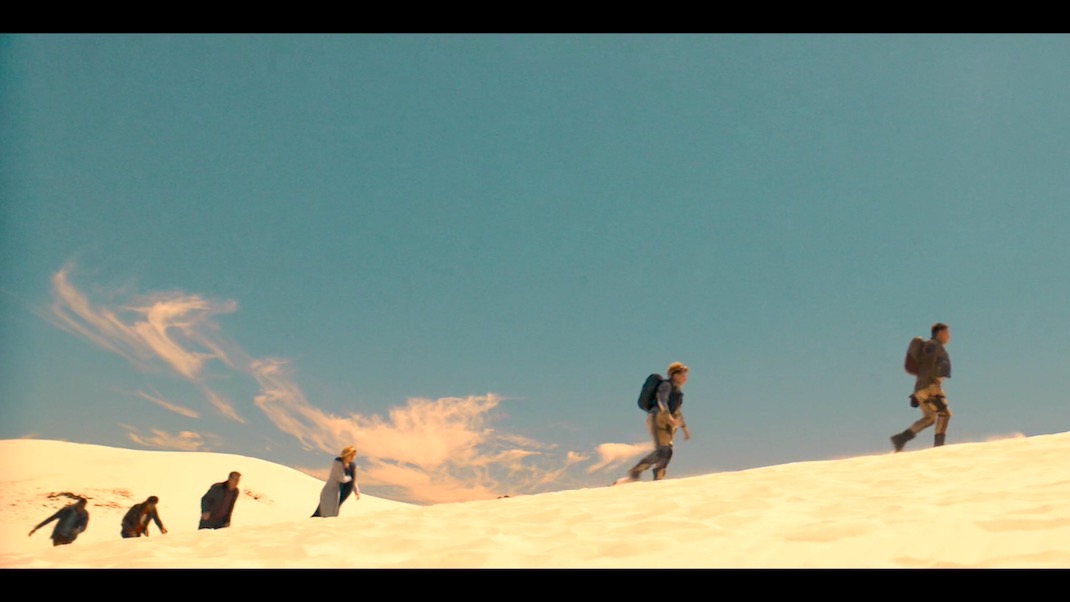 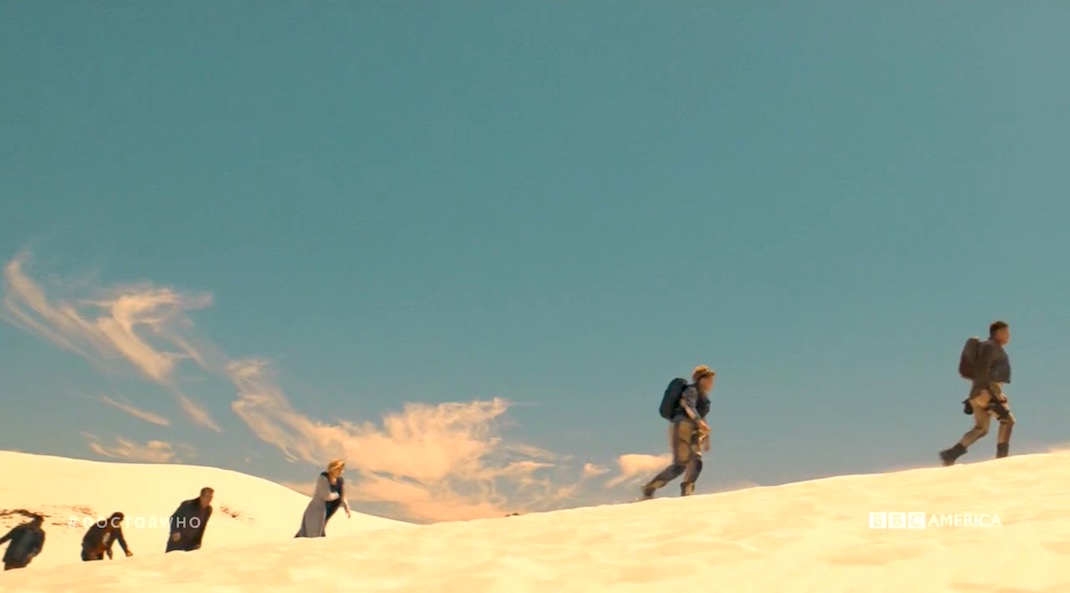 Scene from "The Ghost Monument" — Cropped to a 16:9 Aspect Ratio for BBC America 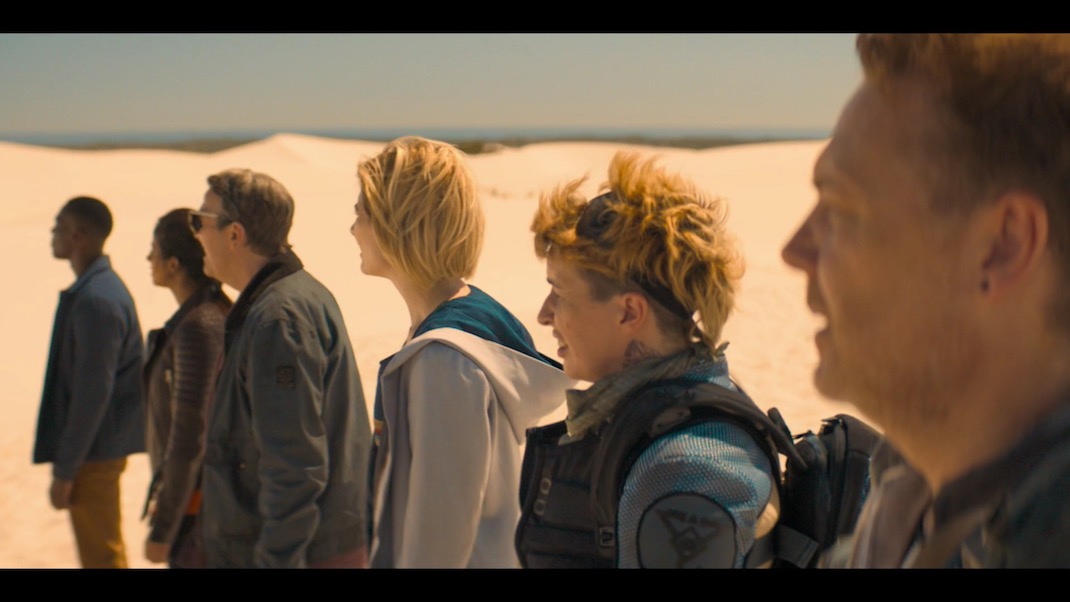 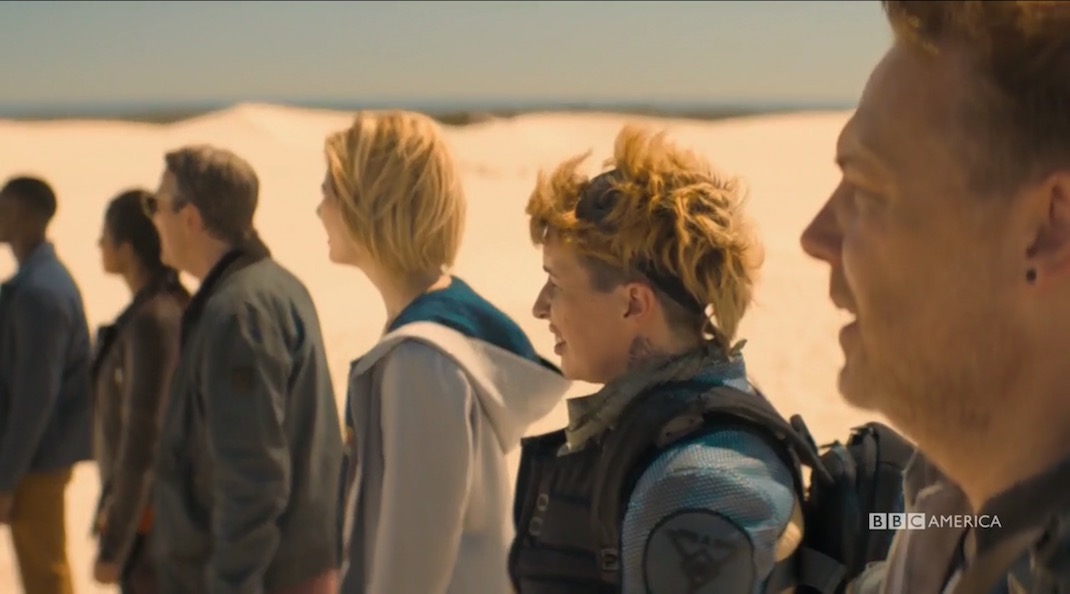 Shot from "The Ghost Monument" — Cropped to a 16:9 Aspect Ratio for BBC America

NEXT: "Rosa"
PREVIOUS: "The Woman Who Fell to Earth"
Read all my Doctor Who reviews here.