Whose Streets? is part of My Summer of Summer Movies, in which I am attempting to see and review every movie that opens (in Chicago) between Memorial Day and Labor Day. Read all about this ill-advised plan here.

Whose Streets?, the new documentary by Sabaah Folayan and Damon Davis, was released nationwide on the same weekend that American white nationalists, Nazis, and Confederates flooded the streets of Charlottesville, Virginia. The film is such a perfectly infuriating, accusatory, empowering counterpoint to the shameless display of white supremacist hatred we saw that weekend, it is tempting to describe the timing of Whose Streets? as "prescient." But to do so would be to miss the film's point, and to sorely undersell its value: though it is a snapshot of a specific time and place, there is not a week in American history when the issues explored in this extraordinary, essential film would not be horrifyingly resonant and furiously relevant.

The literal timing of Whose Streets? is actually easier to explain: it has been released almost exactly on the third anniversary of the event that set its story in motion. On August 9, 2014, an unarmed, 18-year-old black man named Michael Brown was shot and killed by a white police officer named Darren Wilson in Ferguson, Missouri. Whose Streets? documents the aftermath of that crime, in which mourners and protesters clashed with a nightmarishly militarized police force through the streets of Ferguson, and a community's outrage and anger coalesced into a sustained movement.

This is a story many Americans may think they know from the national media coverage, but Folayan and Davis—expertly combining new footage and interviews, media coverage, and the film of citizen journalists—present an immersive, intimate portrayal of this "unseen war" from the ground level. Whose Streets? neither tries nor desires to be a comprehensive, "objective" overview of the events and issues of Ferguson. (Unlike our president, it does not pretend there are "many sides.") Rather, it appropriately privileges the largely unheard voices of the young black activists who were there, becoming a raw and powerful testament of how anger becomes an uprising, and how an uprising becomes a movement.

The film opens with two young black men driving through the streets of this St. Louis suburb, discussing the invisible but distinct lines of demarcation that condemn the residents of certain zip codes to economic and educational poverty that should not exist in 21st century America. "I don't know what year it is," one of them says, of the conditions in Ferguson, "but it's not 2014." Though the film leaves out the traditional, hand-holding narration that would put all of this in academic context, a portrait of this community emerges clearly from the voices of the people who live in those zip codes: it is a place of abject poverty, failing educational institutions, and the rampant, ruthless oppression of a political system that balances its budget on systemic police harassment of black residents. (The scathing Department of Justice report released seven months after the Michael Brown shooting confirmed what the black citizens of this city already knew: "Ferguson's law enforcement practices are shaped by the City's focus on revenue rather than by public safety needs.")

As the murder of Michael Brown galvanizes this community into action, we see it as the tipping point for people who have been angry for decades over, as one resident puts it, "the constant denial of our humanity." We experience—from harrowing eye-level—the staggering overreaction of an overly militarized police force to the mourners and protesters who took to the streets in the days following the shooting, and how this show of force (and the boxing-in of the protest) caused the uprising that the media presented as "rioting." "We're trying to mourn, and you came here with 300 cop cars, riot gear, and canine units," one protester says. "This is the same thing that pretty much got us here."

The media coverage focused—as media coverage always does—on images of rioting, looting, and burning buildings. But Whose Streets? puts the human faces on those sensationalistic visuals, and puts the uprising in context as an explosion of justified anger and a resistance to an overwhelming show of force on the part of Ferguson's white leadership. ("A building burning is worse than a black person being shot," one resident says bitterly. "The building was serving white people; the black body was not.") The film's title is a question that resonates on several levels: taken from a chant the protesters shout while marching—one also used, with hateful irony, by the white supremacists in Charlottesville—it goes to the heart of the issue when we see the army of the state treating black people like insurgents in their own neighborhoods. "You shouldn't have come down here!" one machine-gun toting cop says to a woman who is just trying to get to her car. "This is my property!" another man standing in his own backyard protests, under a hail of tear gas and orders to "go home."  The title Whose Streets?  thus becomes an accusation, an indictment of a nation where protecting the peace means protecting white power, and treating black America as a colony in a nation. (One local activist—who once lived in the Palestinian territories—compares Ferguson to the West Bank, and the comparison does not seem inappropriate.)

Whose Streets? captures all of the injustice, anger, and sadness that followed Michael Brown's murder. (We stand with Brown's mother, Lezley McSpadden, when the St. Louis prosecutor announces that the grand jury has chosen not to indict Darren Wilson, and the moment is almost unbearable.) But Whose Streets? is not a story of victimhood: quite the opposite. It is a story of heroes, told in their own words. We meet David Whitt—part of a citizen "Copwatch" program to monitor and record police activity—who lives next to the spot where Michael Brown was killed, and becomes the vigilant guardian of Brown's memorial.  We meet hip-hop artist and activist Tef Poe, who becomes a charismatic spokesperson for the burgeoning Black Lives Matter movement. 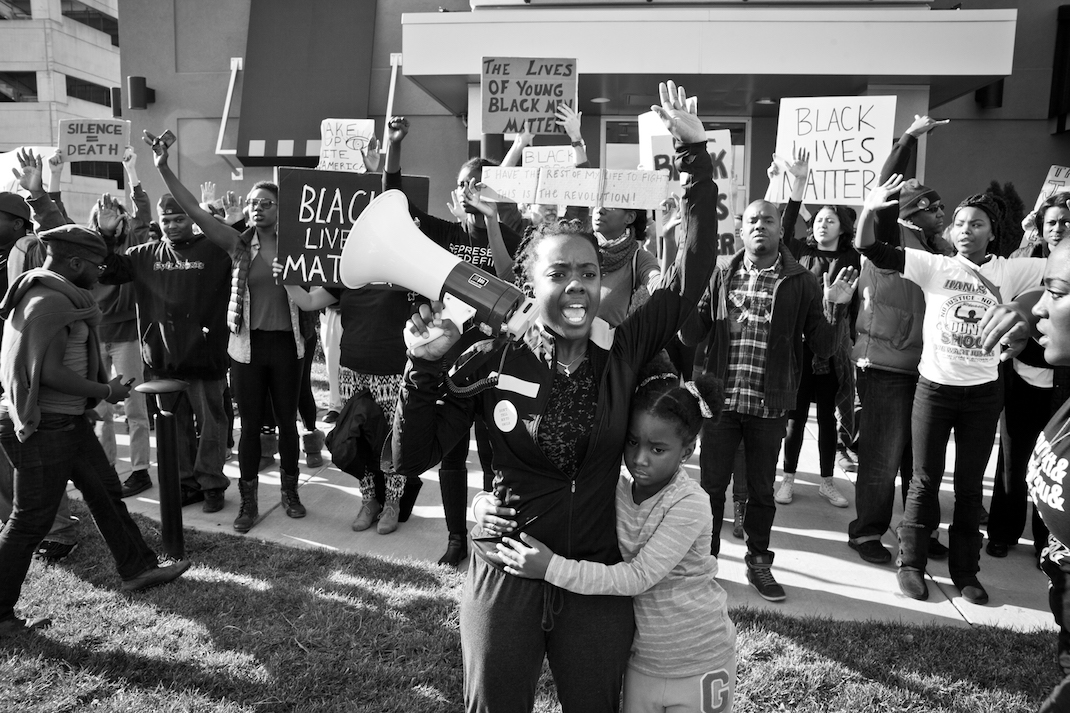 And, most poignantly, we meet Brittany Ferrell, a 25-year-old nursing student and single-mother for whom Michael Brown's murder is the catalyst to drop out of school and become a full-time activist and leader. (The welcome mat outside her apartment reads, "Come back with a warrant.") We follow her fearless leadership of the protests, which includes her much publicized arrest for blocking traffic on the highway. ("Get the fuck off the hill if you're not here to get arrested!" she barks at some of the passive hangers-on—many of them white—who are not willing to put their bodies and freedom on the line.) The site of a momentarily inconvenienced white woman plowing her SUV past Ferrell and the other protesters is horrifying in the wake of Heather Heyer's death in Charlottesville, and all the more infuriating when the white woman subsequently brings charges against Ferrell. (Reading over the complaint—in which the white woman who tried to run her down claims to have feared for her life—Ferrell observes that "this is the narrative of every white person ever." It is a comment that echoes back to Darren Wilson's description of Michael Brown as a "demon," and echoes forward to the events in Charlottesville: months from now, when James Alex Fields is acquitted for the murder of Heather Heyer, that will be his narrative, too.)

Whose Streets? is appropriately infuriating and harrowing, but it is also an intimate, human celebration of this a new generation of activists, personified in Ferrell and the other protagonists. ("This ain't your daddy's civil rights movement," someone shouts at the now famous Ferguson October event, in which venerable NAACP president Cornell Brooks was shouted off the stage and told to yield the microphone to the young activists. "Y'all did not show up!") We follow their tireless struggles in the year following Michael Brown's murder, but we also follow the sweet and tender love story that develops between Ferrell and her fellow activist Alexis Templeton, and we watch her efforts to raise her six-year-old daughter Kenna, who fears her mother will be shot. "I can't make her feel like that won't happen," Brittany says. It is a heartbreaking moment, but Ferrell and the other leaders are undaunted: they are raising their children to understand the racial realities of life in America, because they know they have just begun a fight that Ferrell—25—does not expect to see completed in her lifetime.

"We have to raise a generation of activists," she says.