The Dark Tower is part of My Summer of Summer Movies, in which I am attempting to see and review every movie that opens (in Chicago) between Memorial Day and Labor Day. Read all about this ill-advised plan here.

I suspect that most discussion of Nikolaj Arcel's The Dark Tower will focus on how well—or, if I were going to guess, how poorly—it managed to translate Stephen King's eight-novel-and-change source material into a 90-minute movie. Alas, I can't contribute to that conversation. I've read most of King's novels—I grew up about half an hour from his house in Maine, so our local luminary's work was pretty much required reading—but for some reason I never got around to tackling the more than 4,000 pages of the Dark Tower octalogy. (Personally, I find King's work most compelling the nearer it is to realism, and therefore never felt particularly inspired to delve into the fantasy universe of his self-proclaimed magnum opus.)

So I could only approach the adaptation as what it seems to want to be: a single, self-contained movie inspired by—not inclusive of—King's long, sprawling story. Such a naïve, baggage-free approach as mine should have given the film its best opportunity to impress, but—even freed from the expectations of the fanatic—The Dark Tower is a passable but forgettably underwhelming fantasy tale. By any criteria, this is a paint-by-numbers movie.

Four screenwriters (including the director) are credited with The Dark Tower, and their approach to King's material seems to have been to pull out just as many elements as they needed to make a formulaic action film with the familiar beats of a fairy tale quest. (The film The Dark Tower most reminded me of, in fact, was Jim Henson's 1986 movie Labyrinth, but without Bowie, muppets, humor, or fun.) Jake Chambers (Tim Taylor) is a troubled New York teen-ager, with a kindly mother (Kathryn Winnick) and a wicked stepfather (Nicholas Pauling). Jake is troubled by the death of his father (Karl Thaning), and by recurring dreams about another world: he sees (and sketches, obsessively) visions of an evil Man in Black, a heroic gunslinger, creatures in human masks, and attacks on a mysterious (titular) tower that seem related, somehow, to a series of earthquakes that have been affecting the earth.

Since we all know what kind of movie this is, it is no spoiler to say that all of Jake's visions turn out to be real. He has the King-universe "shining"—psychic powers—and he has been seeing into a parallel dimension, Mid-World, where the sorcerous Man in Black (Matthew McConaughey) is attempting to bring down the Dark Tower that protects all worlds from the forces of evil. Legends say that the mind of a child can bring it down, we are told, and so the Man in Black and his cronies have stealing children from our dimension—"Keystone Earth"—in order to power a psychic cannon that can reduce the Dark Tower to rubble.

Soon, the Man in Black's agents come for Jake, and in fleeing them his visions lead him to a portal into Mid-World, where he quickly meets up with Roland (Idris Elba), the last of the Gunslingers, a Western-inspired breed of Arthurian knights who once protected the world from evil. Bitter, dejected, and with his own dead-daddy issues, Roland now seeks only revenge against the Man in Black, and Jake must convince him to expand his mission to include saving the entire universe. 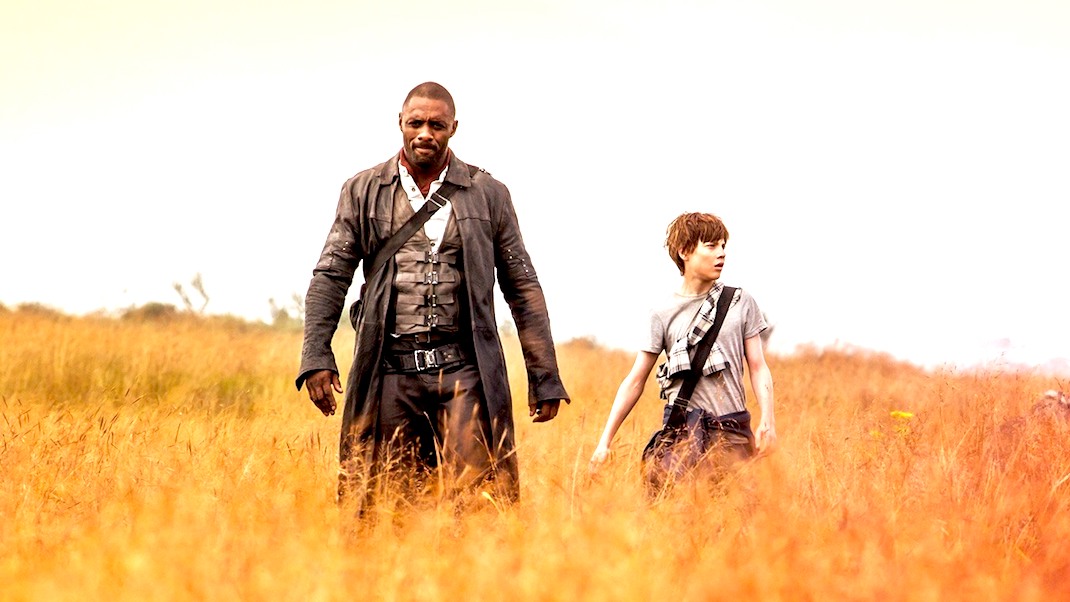 All of these are the silly ingredients of a fantasy formula, of course, but the premise is not necessarily any more silly than those that have sustained better films. The problem with The Dark Tower is not with any of its individual elements, but with the fact that none of them manage to add up to anything particularly interesting, let alone to evoke the greater emotional meaning and wonder needed for such a simple fairy tale formula to succeed.

The cast is fine: Elba brings predictably charismatic gravitas, and Taylor is a solid-enough young actor. (McConaughey—given a villain role he should have been able to really sink his teeth into—seems to know he's in a dud: he walks unconvincingly through the part as though distracted and slightly resentful.) But director Arcel—whose last film, the Oscar-nominated period drama A Royal Affair, I enjoyed very much—turns out to be a strange and unfortunate choice for this endeavor. His world-building seems disinterested: Mid-World is a dull, budget-conscious apocalyptic wasteland, under-cooked, under-developed, and under-explained. (Frequent in-jokes about King's other works—like the appearance of the numbers "1408" and a poster of Rita Hayworth—are probably a nod to the interconnected and metafictional elements of the novels, but read here as nothing more than annoying easter eggs.) And Arcel has no particular gift for adventure: the sparse action scenes are murky and uninspired, and the story moves from one perfunctory plot point or set piece to another without ever generating any narrative momentum or excitement. Even the film's "epic" climax feels small, limp, and anti-climactic.

As I said when I began, I haven't read the Dark Tower books, but I've read plenty of other King novels, and I strongly suspect Arcel and his screenwriters have made the same mistake that led to many previous failed and mediocre adaptations of King's work: they thought the supernatural elements were the important parts. King's has almost always trafficked, consciously, in genre clichés—vampires and werewolves and aliens and zombies—but his success has come because he surrounds such familiar elements with painstakingly realistic characters, genuine emotional stakes, and lovingly constructed worlds. There's a reason he writes big, shambling books: if you reduce one of his stories down to the bare bones of its plot—as Arcel has done here—you leave out everything that makes the journey worthwhile.