Strange Weather is part of My Summer of Summer Movies, in which I am attempting to see and review every movie that opens (in Chicago) between Memorial Day and Labor Day. Read all about this ill-advised plan here.

It is always extremely frustrating—albeit surprisingly common—to realize that everything about a film is working except its screenplay. Alas, this is the case with Strange Weather, from writer-director Katherine Dieckmann (Motherhood), which premiered at the Toronto International Film Festival last year and is now available in select theaters and on demand.

Holly Hunter has what should have been one of the best roles of her honorable career as Darcy Baylor, a Georgia woman just barely enduring life after the suicide of her adult son, Walker, seven years earlier. She has an administrative job at a local university, but may get laid off due to budget cuts. She's thinking about going back to school herself, but can't quite manage to get the application done. She has close friends like neighbor Byrd (Carrie Coon), and an on-again, off-again relationship with local bar-owner Clayton (Kim Coates), but we sense that both her independence and her grief keeps everyone at a frustrated distance. (Few films since Broadcast News have made such excellent use of Hunter's peculiar combination of fierce likability and equally fierce prickliness: Darcy is one of those people who drive their loved ones absolutely crazy, but we easily believe that they'd stick around because knowing her is worth it.)

Strange Weather is at its best in its early sections, when it is just letting these characters move and interact through the heat-soaked atmosphere of this small Georgia town. (A historic drought and heat-wave is the literal level from which the title is drawn.) Dieckmann and her cast achieve an incredible, lived-in authenticity in these characters, and in their relationships, and even in the spaces through which they move: every detail seems true, and it feels like a place and group of people we could stand to visit for a good long while.

If only Dieckmann had been content to stay in that authenticity, and explore the film's issues of grief and reconciliation in less contrived ways. But then Darcy discovers that her late son's buddy Mark (Shane Jacobsen) has gotten rich by stealing Walker's business plan for a chain of hot dog restaurants, which was itself based on Walker's happy memories of childhood with Darcy. With Byrd along for the ride, Darcy sets of on a road trip to New Orleans to confront this man—and some of Walker's other friends along the way—hoping that, in the process, she may finally learn the "truth" about Walker's death. In her purse, she has the pistol her son used to kill himself. 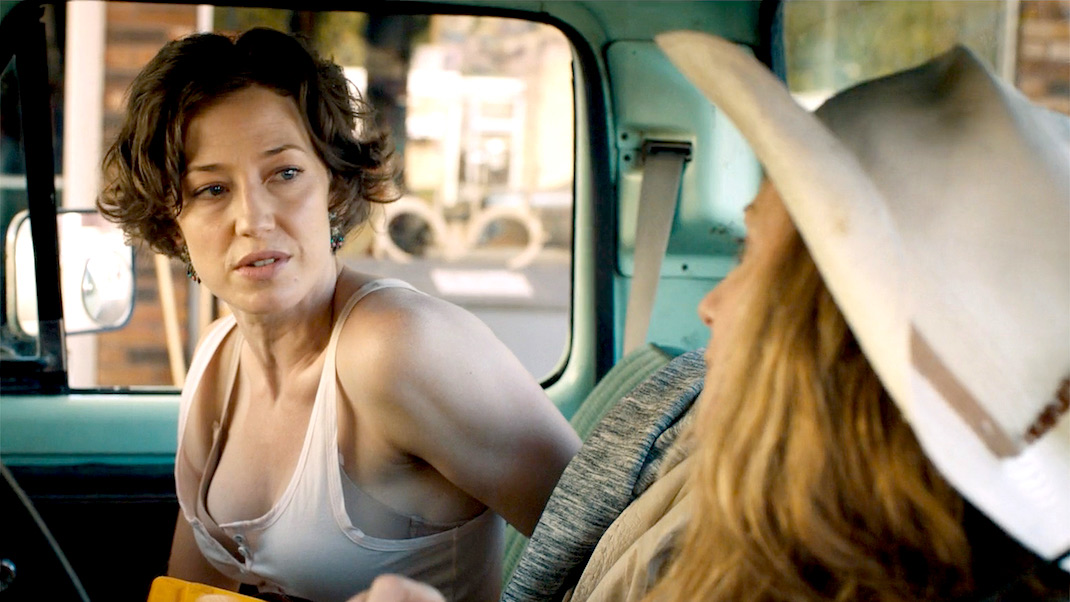 No matter how hard or well Hunter and Coon work—and they work very hard, and very well—nothing about this situation rings true, beginning with the reason Darcy—supposedly hellbent on justice—doesn't speed things up by taking the interstate. (She hates the big trucks.) Watching Darcy plot a circuitous route from Georgia to Louisiana on an old-fashioned map, through conveniently scenic and road-movie friendly back roads, feels like a pretty good metaphor for how Dieckmann's screenplay for Strange Weather goes badly wrong. The film takes very real seeming characters and forces them to travel down roads—literal, narrative, and emotional—that just don't make any sense except as contrived drama.

To be fair, some of this is absurdity is deliberate. (Darcy is contriving an unhinged revenge plot—and even what begins to feel increasingly like a murder mystery—as a psychologically skewed approach to dealing with her grief.) But forcing what should have been an intimate character study into the phony rhythms of a detective-story simply doesn't work, and constantly undermines the authenticity that is otherwise the strength of Strange Weather. (As if this were an Agatha Christie novel, each one of Walker's old friends she encounters provides one tantalizing piece of the puzzle they conveniently remember—even the guy [Craig Boe] she implausibly tracks down, in Louisiana, in the middle of being evacuated from flooding with his family.)

To be sure, there are pleasures to be found along Strange Weather's improbable path, including a visit with an old friend (the always welcome, now deeply missed Glenne Headly), and Hunter's performance of an only slightly overwrought monologue Darcy delivers to her ex-husband. But the film keeps short-circuiting itself with its preposterous plot. (After Dieckmann builds up an organic-feeling friendship between Darcy and Byrd for most of this road movie, Byrd awkwardly drops a key bombshell of information and then—her work done, I guess?—instantly departs the film so Darcy can have her absurd confrontation with Mark alone.) And Dieckmann, who is capable of finding beauty effortlessly in small moments, stubs her directorial toes when she tries to manufacture beauty in big moments. (The image towards the end of Strange Weather, of Darcy standing in a field of flowers beneath the cleansing rain of an irrigation system, is the kind of Shawshank-ian visual metaphor that might seem poetic on paper, but which ends up feeling laughable and vaguely concerning: aren't there chemicals in those sprays?)

Strange Weather is a strange movie: it creates a remarkably realistic world, and Hunter creates a compelling, moving, fascinatingly frustrating character, but both are in service of a silly story that doesn't deserve them. It feels like a film in which completely different and competing visions were at work, which is something we expect from big studio misfires, not small indy labors of love. Here, Dieckmann—adept with the details, but awkward with the big picture—has only herself to blame.