Annabelle: Creation is part of My Summer of Summer Movies, in which I am attempting to see and review every movie that opens (in Chicago) between Memorial Day and Labor Day. Read all about this ill-advised plan here.

Don't get me wrong: I am a fan of the horror genre. But I am not a fan of the peculiarly generic sub-genre that has recently become so popular in American multiplexes, with films like The Conjuring, Insidious, et al. British film critic Mark Kermode calls this particular sub-genre "cattle-prod cinema," or "quiet, quiet, quiet, BANG!" movies. They are "films" purely in the academic sense: really, they are amusement park haunted-houses in celluloid form, constructed purely to manufacture cheap and meaningless jump-scares.

A prequel to 2014's Annabelle—which was itself a prequel to 2013's The Conjuring—Annabelle: Creation finally answers the most pressing question about this franchise: who the hell would make a doll that ugly, and why? As it turns out, the demonic doll's Geppetto is a man named Samuel Mullins (Anthony LaPaglia), whom we first meet in 1945, living with his wife (Miranda Otto) and small daughter (Samara Lee) in a small, dusty California town. Mullins, a woodworker, carved the ghastly thing to sell in the general store. (He marks this edition of Annabelle as #1 in a limited series of 100, suggesting—somewhat dubiously—that there were at least 99 more people in his community who wanted to severely traumatize their children.)

After an accident claims the life of the Mullins' beloved daughter in the opening sequence, we flash forward 12 years: the Mullins have been living as reclusive hermits, but—for reasons that can best be summarized as "a horror movie needs victims"—they have suddenly decided to open their house to a group of orphaned girls under the care of Sister Charlotte (Stephanie Sigman). Among the girls—the focal character, to the extent that this spook show has one—is Janice (Talitha Bateman), a plucky, polio-stricken waif with a stubborn determination to open every locked door in the Mullins' creepily dilapidated house. (People prone to yelling at the incomprehensibly stupid decisions of characters in horror movies will find plenty of cues in Annabelle: Creation. The characters seem to know they're in a horror film from almost the moment they set foot in the house, but still insist on doing dumb things with alarming consistency.) In a locked closet in the closed-off bedroom of the dead Mullins girl, Janice discovers the obviously-evil doll, sitting there in the dark as if it has been waiting just for her. 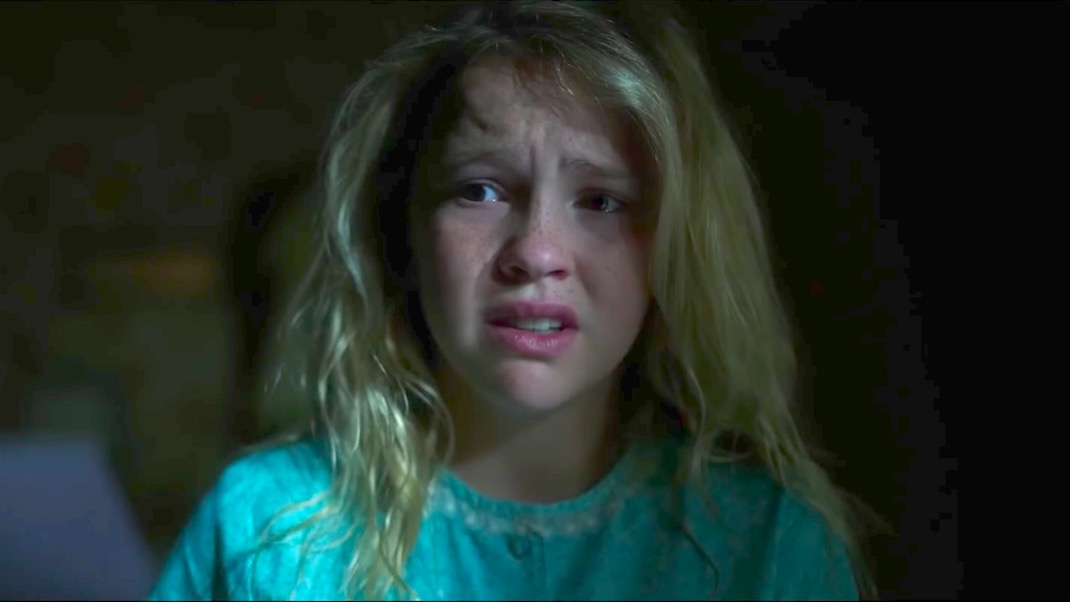 (If Annabelle: Creation were the kind of film that deserved any genuine consideration, this character would be a serious problem. The film briefly tries to tack a phony message of empowerment onto its disabled pseudo-protagonist, but then abandons that feint in service of its crueler and more cynical goals. Bateman is good, but the film ultimately seems to embrace Janice's fear that the doll has focused on her because she is the weakest of the girls. It's hardly a leap forward in representation of people with disabilities, but then we should probably not look to aggressively pointless films like Annabelle: Creation for messages of any kind.)

Even on its own terms—and by the lowered standards of ghost stories and demonic possession films—nothing in Annabelle: Creation makes the slightest bit of sense. (I am a firm believer that horror movies need rules, and the gleeful abandonment of any internal logic is one of the things I dislike about these sorts of movies.) But logic is hardly the point: in fact, it would just get in the way of the contrived set-pieces and jump-scares that are the entire raison d'être of a film like Annabelle: Creation. And, if disposable scares are all you're after, director David F. Sandberg manages to provide some. I suppose the film is well-made, for what it is: the mostly young cast is fine, and Sandberg's camera gets every inch of creepiness out of the dusty farm and dilapidated house. (In terms of blatantly spooky decor, this house is about one step removed from the Sawyer Family Home in The Texas Chainsaw Massacre.) Moments when the film veers towards CGI nonsense rob it of what little Halloween funhouse charm it has, but Annabelle: Creation is effective enough when it sticks to patient, practical scares. (All creepy dolls, creaky doors, and sinister scarecrows, there is not a single unnerving moment in Annabelle: Creation that is not recycled from better films, but clichés become clichés because they can generally be relied upon to work.)

Horror can be an incredibly effective medium for making us question things that need to be questioned, but all Annabelle: Creation wants to do is make you question where the next loud bang is coming from. These sorts of films strip out everything that makes the horror genre worthwhile, leaving just an efficient machine for generating instinctual flinches. So—if that's what you're into—you can expect to jump throughout Annabelle: Creation. You could also reliably expect to jump if I had you sit in a dark theater for 90 minutes, while I crept around silently, leaping out every few minutes to throw an angry cat at your head. If that sounds like fun to you, more power to you—but let's not mistake such a cheap and fleeting sensory experience for anything real or meaningful.