War for the Planet of the Apes is part of My Summer of Summer Movies, in which I am attempting to see and review every movie that opens (in Chicago) between Memorial Day and Labor Day. Read all about this ill-advised plan here.

As diligently as I try to avoid other opinions about a film before I form my own, I entered my screening of Matt Reeves' War for the Planet of the Apes aware that it was already getting raves. (A cursory glance now at Rotten Tomatoes—where the film currently sits at a strong 94 percent—confirms that it's one of the best reviewed films of the year so far.)

But then, about halfway through the film, I asked myself a dangerous—and, as it turns out, disillusioning—question: What would I think of this movie if it starred people instead of apes? Suddenly—like Wile E. Coyote making the mistake of looking down after wandering out into open air—the bottom instantly fell out of my viewing experience. I realized that if you take away the novelty of the technology—which, make no mistake, is breathtaking—War for the Planet of the Apes is a decent but painfully derivative adventure film, and frankly a bit of a slog.

As War for the Planet of the Apes opens, it is five years since the events of Dawn, and fifteen years since the outbreak of Simian Flu (in Rise) brought about the collapse of human civilization and the ascendancy of ape culture. Aging ape-leader Caesar (Andy Serkis) and his brethren are living in the woods of Northern California: they just want to be left in peace, but they are constantly fighting off attacks from a human military unit called Alpha-Omega, under the command of Colonel McCullough (Woody Harrelson). Tired of fighting, and afraid for their lives, some of the apes are beginning to question Caesar's leadership, and a few have even seceded to the human side, where they are labeled "Donkeys" (as in "Donkey Kong") and treated as slaves.

To ensure the survival of ape-kind, Caesar is preparing to fulfill his destiny as Monkey Moses and lead his people through the desert to a far-off promised land. But then a devastating sneak attack on the colony by Col. McCullough and his men leaves Caesar more interested in personal revenge than public leadership. Caesar sets off in pursuit of The Colonel, accompanied by a handful of his closest friends and advisors, including major domo orangutan Maurice (Karin Konoval), deputy-chimp-in-charge Rocket (Terry Notary), and gorilla muscle Luca (Michael Adamthwaite). Along the way, they pick up a mysteriously mute little human girl (Amiah Miller)—who forms a particular bond with the gentle Maurice—and a frazzled comic-relief sidekick who believes his name (granted to him by zoo handlers) is "Bad Ape" (Steve Zahn). 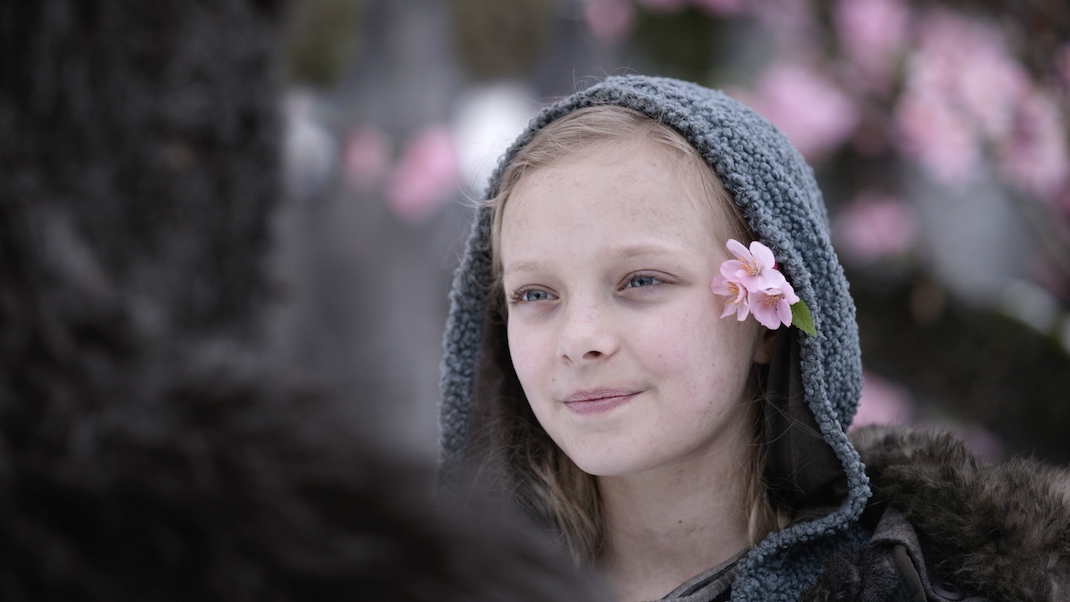 The first thing to say about War for the Planet of the Apes is that it is not really—as its title and trailers would have us believe—a war movie. (Viewers expecting the big, climactic confrontation between apes and humans for the ownership of the planet will have their gratification delayed until an inevitable sequel.) War is operating on a smaller, more personal level: it's a revenge-Western like The Outlaw Josey Wales, married to a prison-movie like The Great Escape, with a polygamous smidgen of Heart of Darkness thrown in for good measure. (At one point we see a graffito reading "Ape-pocalypse Now," in case we have somehow missed the obvious parallels between the bald, renegade, borderline psychotic colonels McCullough and Kurtz.)

The second thing to say about War for the Planet of the Apes is that it is, unquestionably, a masterpiece of visual effects. I only recently caught up with the previous film, Dawn, and—as good as the computer-generated, motion-captured apes in that film were—the technology (by special effects studio Weta Digital) has made some quantum leaps in the intervening three years. In Dawn (and other earlier motion-capture films) we were apt to spend the film marveling at how realistic the CG characters were: here, we are apt to completely forget they are computer-generated at all. Particularly in the all-important area of facial expressions, War's characters allow for a fidelity of performance that is nothing less than stunning. Reeves demonstrates absolute faith in the technology—favoring a lot of very tight close-ups for his simian actors—and it invariably pays off: the actors (particularly Sirkis, who is to this new art form what Rénee Jeanne Falconetti was to celluloid acting) are able to imbue their creations with incredible emotional subtlety and nuance. 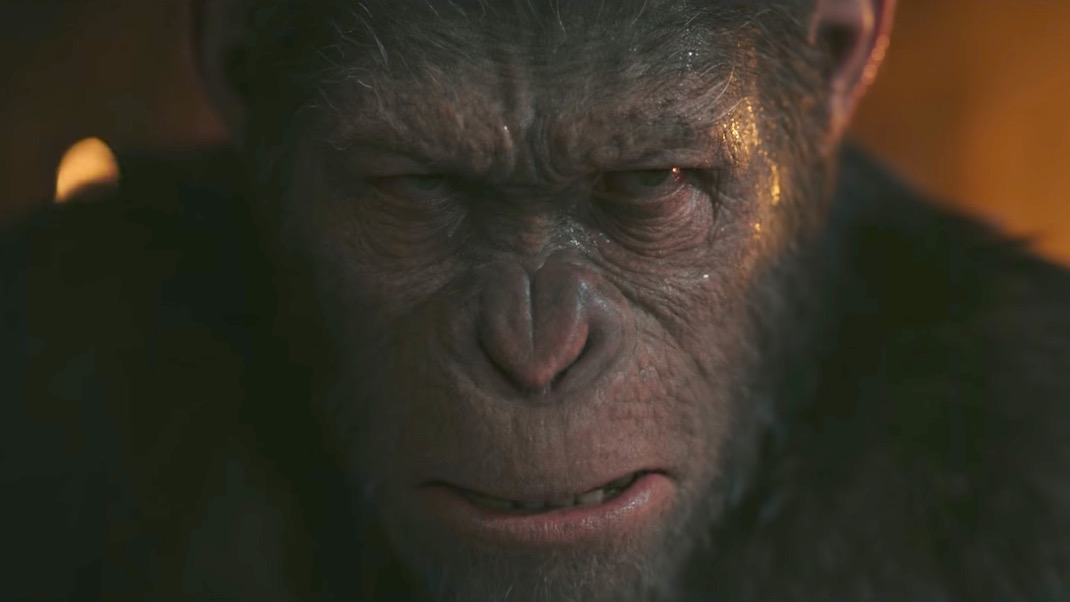 If only the screenplay—by Reeves and Matt Bomback (Dawn, The Wolverine)—had the same commitment to subtlety and nuance, or the same determination to create lifelike characters. The story is not necessarily any worse than the average summer action movie—and miles above incomprehensible techno-porn like Transformers: The Last Knight—but its mishmash of convenient formulaic clichés is unworthy of the effects. Woody Harrelson is always a welcome presence, but his character here is one of the script's biggest problems: most of Col. McCullough's motivations don't make a whole lot of sense, and the few that are reasonable—like trying to preserve the survival of the human race—are overshadowed by the horror (the horror) of his cartoonishly unhinged Kurtz-Light persona. Clunky narrative devices also abound, in the minor but persistently annoying manner that happens when screenwriters are trying to follow a predetermined map to set-pieces rather than any internal logic. (I'm trying to avoid spoilers, but I will just say that the film features a painfully illogical—and clumsily metaphoric—wall; a convenient stumble into a super-convenient tunnel; a bafflingly unguarded and unmonitored prison; and a creatively unconscionable deus ex avalanche, among other problems.)

None of this would matter much if the screenplay didn't overload the story with heavy-handed Biblical allusions and political metaphors it can't really earn, or if the mesmerizingly realistic apes had personalities or character arcs as interesting as their faces. What's the point of using technology capable of such range to create such one-note characters? There is no complexity to any of the ape characters this time—certainly none approach the fierce fascination of Kobo from Rise and Dawn—and the script sets up a lot of moral handwringing that turns out to be meaningless. (I was disappointed with the way War manipulates events such that Caesar doesn't really have to make any hard decisions.) Reeves is also from what we can perhaps call the George Lucas School of Humor: everyone is grim, solemn, and stoic, except for the one character who is designated as comic-relief. (Steve Zahn has never failed to improve any film in which he appears, and his Bad Ape is very effective when allowed some quiet pathos: the rest of the time, however, Bad Ape's clownish slapstick and tonally-incongruous mugging come dangerously close to earning him the title "Jar Jar Chimps.")

I am being hard on War for the Planet of the Apes, but I couldn't help but feel there were tremendous opportunities missed to make a genuinely great movie. In this third film in this franchise—and the first in which the verisimilitude of the CG characters is absolutely flawless—where is the exploration of this now 15-year-old ape culture? (I would rather have stayed with the colony, learning how the ape civilization really operates—and how it differs from human society—than follow Caesar and his Primate Posse on an all-too familiar revenge story.) Could we not have focused on Caesar's continued evolution as an ethically conscious but compromised leader—which seemed to be promised by the end of Dawn—rather than reducing him to a grim, one-note Clint-Eastwood-type avenger? And, similarly, I would have preferred to have seen an adversary in Harrelson's character who was not a genocidal psychopath, but a good man facing the imminent extinction of his own species: the reality of this universe is that humankind is on its way out, and that's a far more interesting ethical and existential dilemma to explore—with potentially valid and complex concerns on both sides—than the almost mustache-twirling villainy the Colonel embodies here. War seems to go out of its way to strip the most interesting and promising elements out of this scenario, reducing the story to one that is disappointingly generic.

What it boils down to, for me, is that—for all its superficial allusions and emotional feints—I don't think War for the Planet of the Apes, or this entire franchise, is really saying anything. It is an unmistakable watershed in special effects, and it makes for a passable enough summer action movie, but it's nowhere near being the sort of great and important science fiction film that the original Planet of the Apes was. The technology is there like never before: it would be nice to see writing that rose to the same level of artistry.