The Ornithologist is part of My Summer of Summer Movies, in which I am attempting to see and review every movie that opens (in Chicago) between Memorial Day and Labor Day. Read all about this ill-advised plan here.

Not having a particularly comprehensive theological background, it is only a hypothesis that The Ornithologist—the provocatively sacred and profane new film from Portuguese director João Pedro Rodrigues—is supposed to be about a saint.

What is clear to me is that it would try the patience of one.

What is the critic's responsibility when confronted with a clearly artful film that they don't begin to understand? Do we reject it out of hand as incomprehensible nonsense? (But it is surely lazy and irresponsible to attack a work of art just because one doesn't understand it.) Do we take the time to rewatch, analyze, and explicate it, until we can squeeze out some semblance of meaning from the mysteries? (In an ideal world, yes. But few of us have that kind of time, and not every confusing film turns out to be worth the prolonged effort such determined interpretation requires.) Perhaps the safest thing to do—all things considered—would be to declare the work a masterpiece, and trust that no one else will understand it well enough to argue with us.

But I'm not willing to go quite that far with The Ornithologist, so I'll opt for my usual compromise: describing something of my experience of watching the film. This may be the best approach anyway, since I strongly suspect The Ornithologist is more rewarding when approached as a sensory experience than as a text to be deciphered.

“Whoever approaches the Spirit will feel its warmth, hence his heart will be lifted up to new heights.” That quote—from St. Anthony, the Patron Saint of Lisbon—opens The Ornithologist, giving us fair notice that we are in spiritual waters. The literal waters we are in, however, are those of a river in Northern Portugal, an absolutely pristine and isolated place of beauty. It is silent, primeval, and far from the things of man, but a man has ventured forth into it. He rows a Kayak down the river that carves its way through stark and indescribably beautiful cliffs. This is Fernando (Paul Hamy), the titular birdwatcher, and for many long, patient minutes we just observe him observing the seabirds. This long opening sequence is peacefully meditative, wordless and almost completely silent. But then, as he sits on a shore, a cellphone rings, the sound shrill and out-of-place. Fernando answers the phone, and has a brief conversation with someone—a friend? a boyfriend?—who reminds him to take his medication. But the reception is terrible: this is not a place for technology, not a place where contact with the modern world is even possible, let alone appropriate.

Shortly after the silence is broken, too, by an aggressively rising soundtrack: screeching, discordant, horror-movie violins that grate against the contemplative tranquility of the man and the natural beauty of the place. It is a warning for us, that the man can't hear. Soon, the man—who has been so busy watching the birds that he has not noticed the waters swelling around him—is out of control in his kayak, being blasted downriver.

At this point—and for what I think is the only time in the film—our POV is detached from Fernando's, and we watch two young Chinese hikers, Fei (Han Wen) and Lin (Chan Suan) make their way through the forest. From their dialogue it is clear that they are devout Christians. But there is an odd moment that, like the discordant horror-film music, throws our entire concept of the film out of focus: Lin has cut her leg, and Fei licks the blood off Lin's finger before bending down to suck it directly from the wound. "Not too much," the wounded girl admonishes. 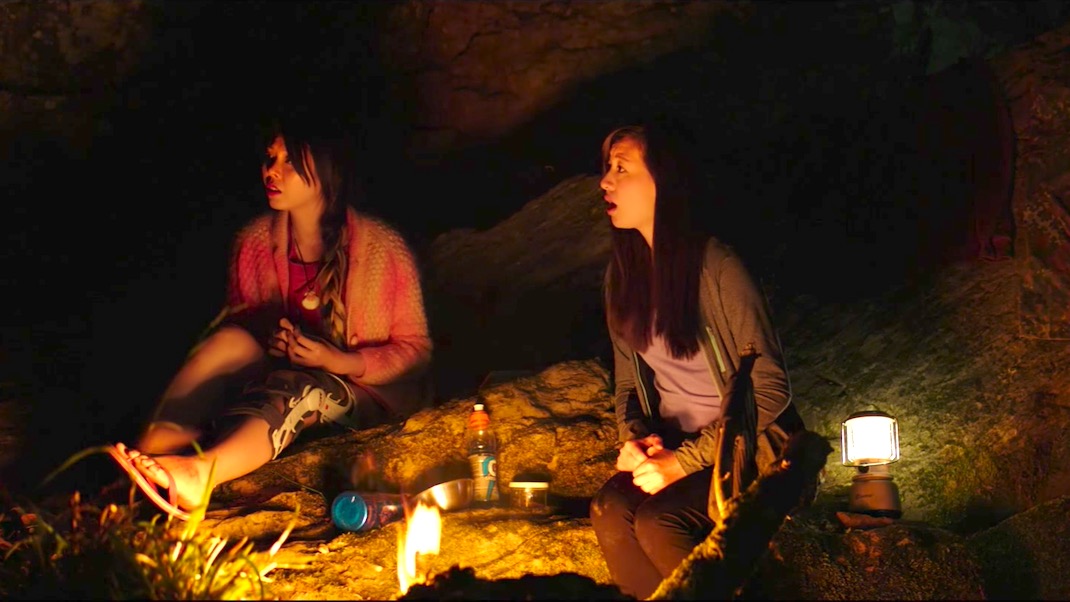 Have we just seen what we thought we saw? It is fleeting enough—and treated casually enough—that we are not sure, but something is definitely off. Soon, the girls stumble across the near-drowned body of Fernando, and resuscitate him. Around a campfire that night, the girls serve him tea, and explain that they are hiking the Way of St. James, the Christian pilgrimage route which runs through France, Spain, and Portugal. They are lost, however, having lost the path when their GPS technology failed them. They beg Fernando to become their guide and protector, explaining that the woods are full of evil spirits: he refuses, citing his own agenda and expressing his conviction that religion and spirituality are all bunk. The three retire for the evening: the girls together in their tent, giggling, and Fernando left outside.

And this is where The Ornithologist—which has been only hinting at weirdness so far—begins descending into full insanity. When Fernando wakes up, he is suspended in his underwear from a tree, his body—including, in way which looks most uncomfortable, his genitals—is trussed tightly in ropes. The girls are giggling, and that night we overhear their plans to castrate him. 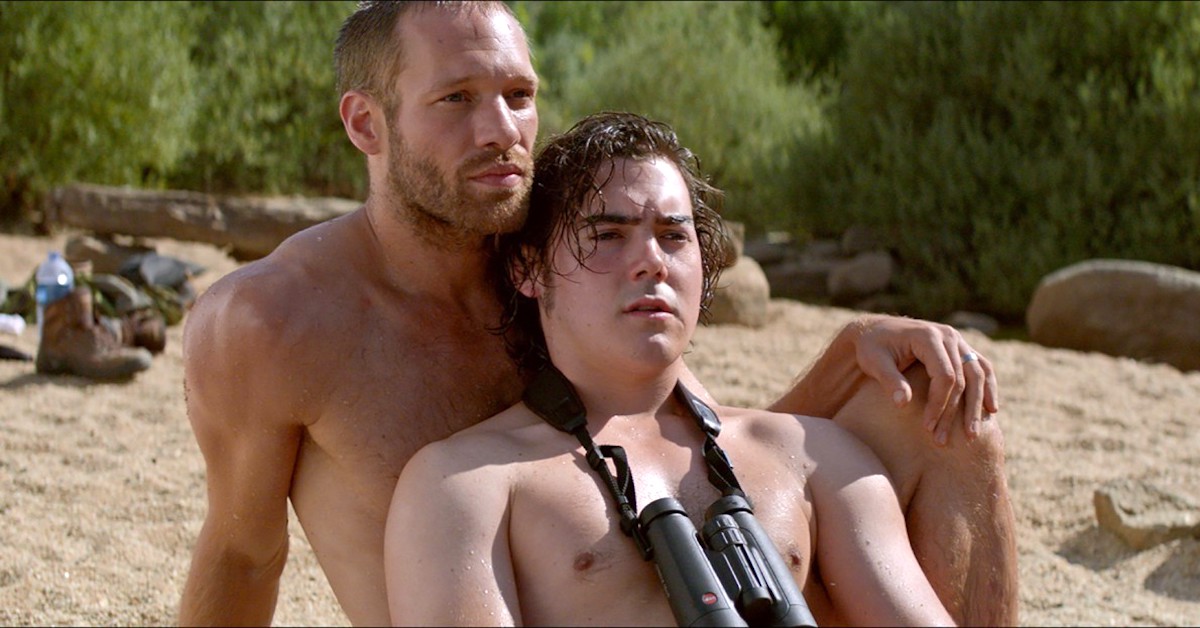 It may sound like I am giving a lot away, but trust me: this is only the initial setup for Fernando's increasingly strange and surreal ordeal. Watching The Ornithologist—at least for those of us unfamiliar with the director's previous work—is a process of constant reassessment about just what the hell it is we are watching. It begins like a nature documentary, segues into an adventure-survival tale, takes a brief detour into becoming Audition, and swerves into the territory of The Blair Witch Project—and that's just in the first hour, before it really goes off any cinematic rails. Along his journey Fernando will share an erotic and violent encounter with a deaf and mute shepherd named Jesus, encounter the terrifying wilding rituals of bizarrely costumed men, and be shot by bare-breasted, rifle-wielding Amazons. He will stumble across wounded doves, and ominous owls, and a forest filled with stuffed animals. He will investigate dark caves and foreboding tunnels and abandoned shrines. And he will change: spiritually, and, at moments, physically. (Late in the film—in ways that at first register only subliminally—the director João Pedro Rodrigues begins standing in for Remy in certain shots.)

What does any of it mean? I confess, I have no idea: watching The Ornithologist, my mind kept trying to connect the disparate pieces together into a cohesive narrative. (Is Fernando simply off his meds, and going increasingly insane? That possibility is there, certainly, but it doesn't explain the blood-sucking Chinese women, who are introduced in a scene that is not from Fernando's perspective.) Is it all an elaborate allegory, a retelling of classic myths and a gleefully blasphemous reimagining of religious texts? (There are elements of the lives of Saints—particularly Saint Anthony, of course—but also allusions to The Odyssey and other Greek myths.) Or is this simply an assemblage of personal metaphors, the meanings of which might be clear to the director (if it's even clear to him), but which can only be vaguely inferred by the rest of us? There is the uncomfortable feeling, even, that Rodrigues may be recklessly playing with potent imagery with which he actually has no deep connection.

So the intellectual search for meaning in The Ornithologist might just be doomed to failure, leaving us the option of accumulating some emotional or spiritual narrative for ourselves. Certainly, the film is lovely and fascinating to experience, and for most of its running time I was with it, accepting—even enjoying—the disorienting shifts from one weirdly beautiful set-piece to the next. But The Ornithologist becomes exponentially more surreal as it proceeds: its narrative grounding falls away a little more from one sequence to the next, leaving us in the end with a series of detached images and obscurantist religious metaphors. This was no doubt the intention—to begin in seeming realism, and then strip away all solidity and identity until we are left stranded in quasi-sacred surreality—and perhaps it is a worthy one. But I must confess that I ran out of patience long before the final reel ran out of film.