The Journey is part of My Summer of Summer Movies, in which I am attempting to see and review every movie that opens (in Chicago) between Memorial Day and Labor Day. Read all about this ill-advised plan here.

Two strong central performances are not enough to recommend The Journey, a silly dumbing-down of the events that led to the 2006 St. Andrews Agreement, which brokered peace in Northern Ireland.

The film—directed by Nick Hamm (Killing Bono) and written by Colin Bateman—condenses the complexity of this historic accord, and the entire history of "The Troubles," down to the contentious relationship between two men: Martin McGuinness (Colm Meaney), the Catholic IRA revolutionary turned Sinn Féin politician; and Ian Paisley (Timothy Spall), the ultra-conservative Protestant evangelical and leader of the Democratic Unionist Party. "These extremists were polar opposites who had never previously spoken, but were forced by circumstance and fate to make an historic journey together," a title card at the beginning of the film informs us. "This story imagines that journey."

It is in the word "imagines" that The Journey reveals its fundamentally flawed approach. Instead of dealing with historical fact—with all its political complexity—Hamm and Bateman have fabricated a wholly fictional narrative that reduces a 30-year civil war to a bunch of bruised feelings, and the relationship between these two difficult and controversial figures to that of a squabbling married couple.

In The Journey, Dr. Paisley leaves the peace-talks—almost before they have gotten underway—to journey home to Belfast for his 50th wedding anniversary. McGuinness insists on traveling with him, because protocols require that the leadership of opposing parties must travel together to remove the temptation of an assassination attempt from either side. So these two men who hate each other—and who have never previously exchanged a word—are stuck together for a car-ride to the airport in Edinburgh and a short flight to Belfast.

But British Intelligence officer Harry Patterson (John Hurt, in one of his last screen roles) sees this enforced proximity as an opportunity to do a little impromptu marriage counseling. He has a young MI5 agent (Freddie Highmore) masquerade as the driver, wires the car with video and sound, and sets out to orchestrate some male bonding between these two enemies who have never had a conversation. (At one point the stubbornly recalcitrant Paisley falls asleep, so Paterson instructs the driver to wake him up by "accidentally" blasting the radio.) Soon, most of the leadership of the United Kingdom—including Prime Minister Tony Blair (Toby Stephens), Sinn Féin leader Gerry Adams (Ian Beattie), and Paisley's son (Barry Ward)—are all gathered around Patterson's chair with fingers crossed, voyeuristically watching him attempt to coax an emotional breakthrough out of this highly critical speed-date. 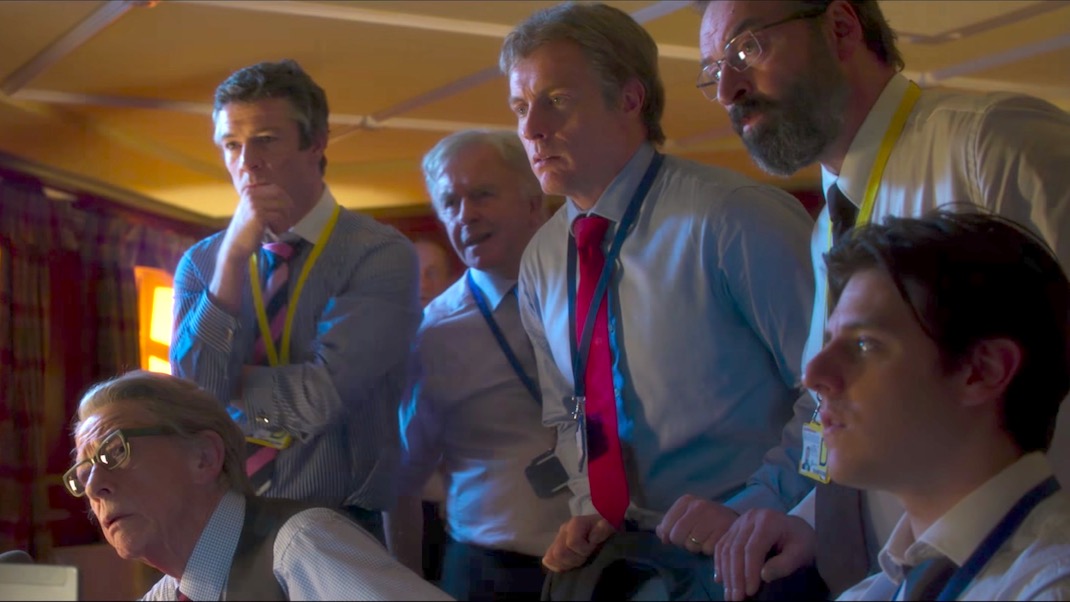 The first problem with The Journey is not that this situation never happened. (Apparently, the two men did travel to Belfast together at one point during the negotiations, and some artistic license could be forgiven.) The problem—and it's one from which the film could not possibly recover—is that this situation as presented is patently ridiculous, and unbearably contrived. Hurt's character fabricates some excuses and obstacles to get the men talking, and others—like a deer darting in front of the car, or a mishap with a gas-station credit card—seem to occur naturally. But none of them are remotely convincing as anything other than a clumsy screenwriter's conveniences, and none of them lead to anything except absurdly phony dialogue without an ounce of authenticity. (An implausible side-trip to an abandoned church—in which Paisley can stand in a pulpit while discussing his crimes, and McGuinness can stand in a graveyard while discussing his crimes—is perhaps the most painful of the film's relentlessly obvious manipulations.)

The next problem is gross over-simplification. As the men (eventually) begin talking, we get a conversational Cliff's Notes summary of The Troubles, with obligatory references to Bloody Sunday, the Remembrance Day bombing, and the 1981 hunger strike. We get passing mentions of the sins in each man's past, including McGuinness's complicity in the killing of innocent people, and Paisley's irresponsible religious rhetoric that inspired violence against Catholics. But one doesn't need to be an expert on The Troubles—I'm certainly not—to feel certain that we're getting a grade-school version of events at best, one that cheapens history and glosses over the long, painful, incredibly complicated truths of Northern Ireland.

So The Journey fails awkwardly as a narrative, and it fails shamefully as a history lesson. What we are left with, then, is to view the film as two character studies: this is the level on which the film works best, but that is only faint praise. Meany is good in the less showy role: the film's sympathies are more strongly with McGuinness, so he has the somewhat thankless part as the more reasonable, open-minded participant in this absurd blind-date. (Basically, he's the goofy seducer, trying desperately to get to political first base with the buttoned-down prude in the backseat beside him.) But it is Spall's weird, angry, full-bodied performance as Paisley that emerges as the only possible justification for seeking out The Journey. I don't know enough to say how accurate the impersonation is—and one strongly suspects it smooths a few rougher edges off a despised (and perhaps despicable) figure—but it is the only believable thing in the film, and peculiarly mesmerizing to watch.

Unfortunately, the cliché- and platitude-ridden, nuance-free dialogue is nowhere near as convincing as the performances, and doesn't delve any deeper than a Barbara Walter's special in telling us who these men really were. There is no doubt a fascinating true-life story to be told about the negotiations of the St. Andrews Agreement, and about the relationship between these two men: former mortal enemies who ended up leading Northern Ireland together in such a convivial relationship that they were referred to in the press as "The Chuckle Brothers." But The Journey—lacking historical accuracy, psychological insight, and emotional authenticity—is decidedly not that story.