The Beguiled is part of My Summer of Summer Movies, in which I am attempting to see and review every movie that opens (in Chicago) between Memorial Day and Labor Day. Read all about this ill-advised plan here.

I confess to being somewhat baffled by The Beguiled, Sophia Coppola's ethereal remake of Don Siegel's 1971 film. I am baffled not by the film's story—which has no surprises if you have even seen the trailer, let alone if you have seen the vastly superior original—but by its reason for existence. Coppola (arguably) improves on the mood and aesthetics of the piece, but in every other way she leaches the life out of a tale that once teemed with dark emotion and kinky Southern Gothic melodrama. Too gauzy to be passionate, too gentile to be disturbing, and too shallow to be psychologically thrilling, Coppola's version of The Beguiled is bloodless in every sense.

The Beguiled concerns the goings-on at Miss Farnsworth's Seminary for Young Ladies, a Virginia school for girls. It is 1864, near the end of the U.S. Civil War, and only five students are left in the care of headmistress Miss Martha (Nicole Kidman) and teacher Edwina Morrow (Kirsten Dunst), who instruct their charges in the art of being gentile Southern ladies. One day, the youngest student, Amy (Oona Laurence)—while foraging for edible mushrooms in the nearby woods—stumbles upon the severely wounded Cpl. John McBurney (Colin Farrell), a Union soldier. Instead of immediately turning this enemy soldier over to the Confederate troops, the women decide to take him in and nurse him back to health: it is, after all, the Christian thing to do.

The presence of the handsome and charming McBurney among these lonely belles—who have all been long abandoned by their menfolk—has an immediate and increasingly disruptive effect. Subtly, at first, they begin dressing up for him, flirting with him, competing for his attentions. In Kidman's Martha, we sense a repressed sexuality, and an exhaustion with being "strong," that responds to the proximity of this virile man. In Dunst's Edwina—the best, most complexly layered performance in the film—we see a thwarted romantic, a pinched and bitter young spinster seeing her last chance for love and an escape from a life she quietly hates. And in Elle Fanning's Alicia—the oldest student, and the amoral "bad girl"—we see an embryonic Scarlett O'Hara, eager to test her burgeoning sexual powers against the first available man. McBurney is a natural seducer, and—first for survival, then for sheer enjoyment—he responds to each according to their needs, subtly becoming what each wants him to be. The women become quietly rivalrous, but McBurney seems to feel no obligation to choose between them; we see him, instead, warm to the idea of spending the rest of the war with his own personal harem.

It is easy to see why Coppola was drawn to this material: in this strange, repressed sisterhood of women we are reminded of the Lisbon Sisters in the director's first (and best) film, The Virgin Suicides. Coppola also has a considerable fascination with, and gift for, the aesthetics of manners: it makes her well-suited to realize this precariously polite feminine society hidden away in the war-torn wilderness. The Beguiled—which netted Coppola the best director award at Cannes—is an undeniably beautiful film: it is hauntingly quiet—with wonderful sound-design that includes scarcely a note of music—and Coppola's shot composition is lovely almost to a fault, arranging still and silent tableaux to the light of strained sunshine and flickering candles. The Southern Gothic mood of the film is immersive, evocative, a near-perfect visual balance of formal restraint and sultry atmosphere. 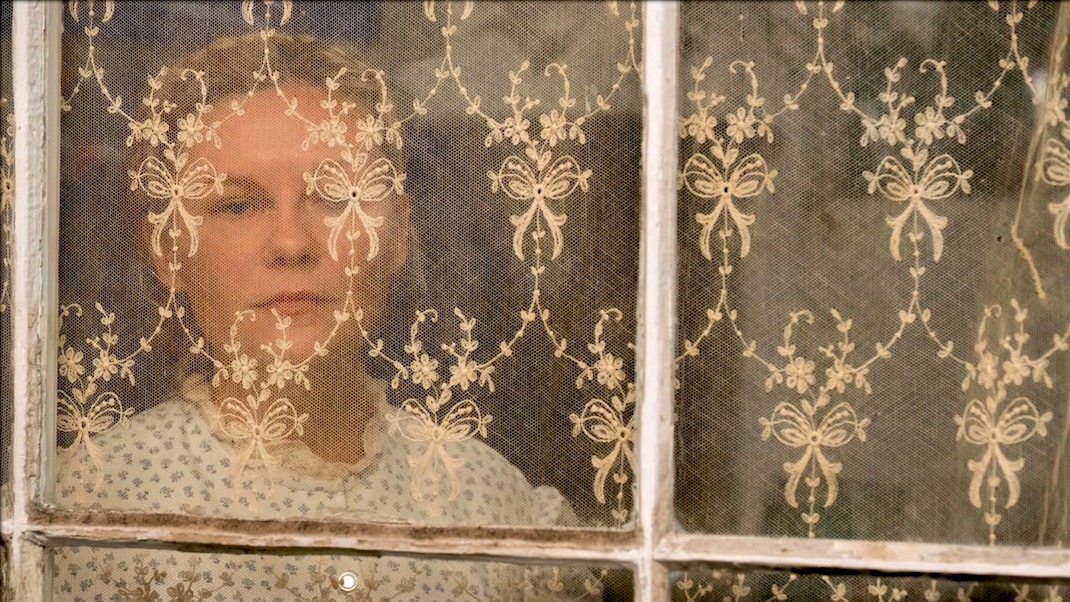 But it is in the screenplay that Coppola lets her promising film down. The 1971 version of The Beguiled was a pulpy potboiler, a strange and dangerous psychodrama that dared to be ugly and off-puttingly perverse. For example, Martha (played in that version by the great Geraldine Page) was a repressed but still raw sexual nerve, longing for someone to rekindle the passions she had only ever felt—as we learned in flashbacks—in the steamy incestuous relationship she shared with her late brother. McBurney (played by Clint Eastwood) was an unrepentant liar and a consciously conniving seducer. Flashbacks revealed that he was lying about being a Quaker and a pacifist, and his sexual manipulation of the girls was cynically deliberate and heartlessly evil. (In his very first scene, he shared an extremely inappropriate kiss with his innocent 12-year-old rescuer.) Siegel's The Beguiled still seems like a brave and vital minor classic, ruthlessly plunging its psychosexual depths with a courage and perversion that lets it stand honorably alongside such surreally disturbing films of the early '70s like The Wicker Man.

Coppola's The Beguiled just doesn't have that powerful, fascinating vibrancy: everything is too polite, too palliative, too solidly on the simpler surface of things. Bizarrely, Coppola has stripped the film of nearly all subtext. This includes political subtext: it has proven rightfully controversial that Coppola has left out the single black character—the slave Hallie, originally played by Mae Mercer—conveniently eliminating a vital counterpoint and a potent commentary on the fatally flawed morality of these privileged white Southern women. She has also, in casting Farrell, made McBurney an Irish-immigrant who only joined the Union Army for the money. These two decisions disingenuously wash this Civil War tale of any historical context, eliminating the veritable ocean of sociopolitical relevancy that saturated the original. 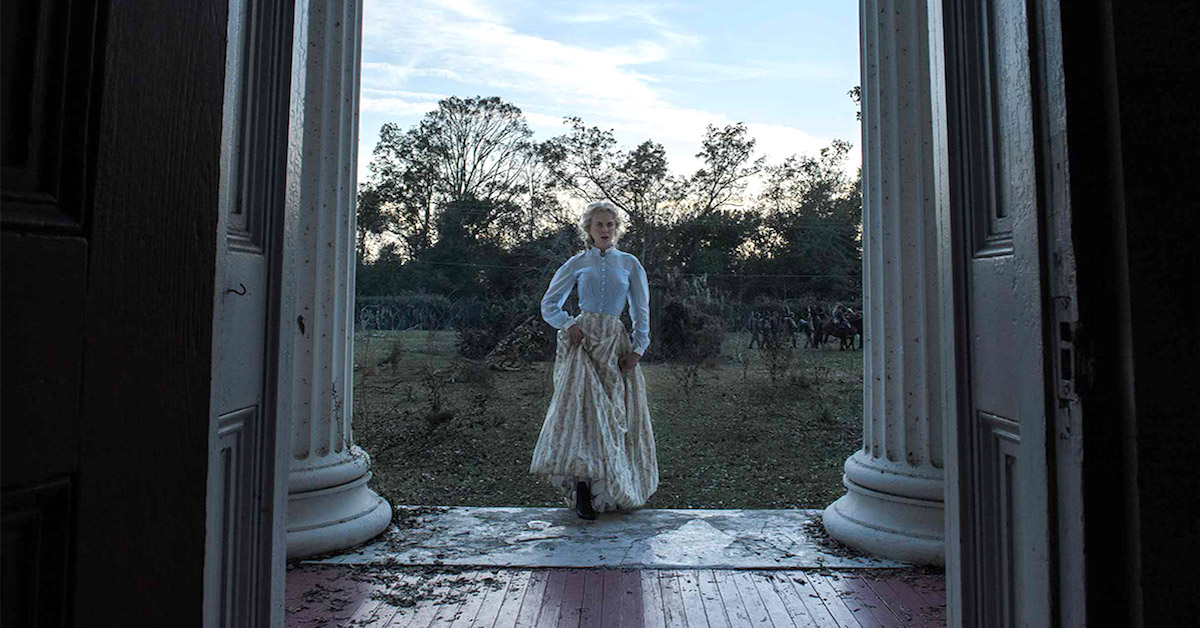 What we are left with then, is a psychological gender war—divorced from context—but even on this front the film fails to satisfy. Farrell's McBurney is more of a lucky opportunist than a loathsome predator: he lacks both the amoral intelligence and the misogynistic evil of Eastwood's version. This was undoubtedly a deliberate choice on Coppola's part—to make the film belong more to the women and less to McBurney—but it actually robs the story of much of its dark energy, and has the unfortunate effect of robbing the female characters of their intelligence, strength, and agency. (To put it simply, they seem dumber for succumbing so easily to his clumsier machinations, and far more petty and petulant in their ultimate revenge.) Coppola also simplifies the female characters disastrously: she strips out their backstories and inner-monologues (which Siegel had given voice to), and even skimps on what seems to be the intended subject of the film: the complicated relationships women have with each other. We have very little sense of who any of these woman are, and almost no dialogue is spent on their friendships, resentments, competitions, or jealousies. Coppola seems to think artful framing can pass for characterization, and that furtive glances can substitute for interpersonal interaction. It makes a film that should have been deeply psychological feel frustratingly shallow.

I have seen it suggested that this version of The Beguiled is somehow a feminist reclamation of this story, an interpretation I find patently, offensively absurd. The women in Coppola's version are less empowered, less intelligent, less developed, and have less agency that those in the original. If a male writer-director had produced this version, I wonder if critics would more easily recognize that the male character has somehow become more blameless and sympathetic, and that the women have become more pathetically simpering, pettily vindictive, and stereotypically superficial. The 1971 version of The Beguiled may have come from a male director, and located its point of view more strongly in its male antagonist, but it was by far the more powerfully feminist tale. Siegel's The Beguiled is largely overlooked these days, but we can only hope Coppola's version—which seems to have little other purpose—might at least give this weird forgotten gem a bit of a revival.

I called Coppola's last feature, The Bling Ring, a "deliberately shallow movie," assuming that the lack of depth in her treatment of mindlessly materialistic twits was an intentional marriage of form and function. In retrospect, that may have been giving the director too much benefit of the doubt. Here, she has taken characters who should be complex and made them vapid, and she has turned a story that should be rich in psychological and sociopolitical depth into yet another stylish but shallow wallowing in lifestyle aesthetics.