Maudie is part of My Summer of Summer Movies, in which I am attempting to see and review every movie that opens (in Chicago) between Memorial Day and Labor Day. Read all about this ill-advised plan here.

Director Aisling Walsh casts a peculiarly compelling spell in Maudie, and she does it by sensitively recognizing and reassembling the strange elements that brought Canadian folk-artist Maud Lewis minor fame in the first place. Lewis made simple, innocent, brightly optimistic paintings, but she did so from a life of incredible poverty, hardship, and cruelty: it was as if she was determined to provide for herself the joy that would otherwise have been completely leached out of her life.

In Maudie, Walsh understands this, and she understands it well enough to show us, not tell us, what was so remarkable about Maud Lewis. Embodied in a fantastic, surprisingly restrained performance by Sally Hawkins, Maud becomes the inexplicably happy center of a film that doesn't shy away from the ugliness of her life. The cumulative effect is heartwarming, but it's a complicated, murky kind of warmth, surfacing through the darkness like Maud's paintings: as surprising, incongruous bursts of color.

The story opens in the 1930s, in the small village of Marshalltown, Nova Scotia. Maud is a slightly disabled young woman, her body stiff, slightly curved, and uncooperative. (Lewis suffered from juvenile rheumatoid arthritis in her childhood, though it's unclear whether anyone in the film knows the name of her affliction. Maud herself says she was "just born funny.") She is living with her controlling Aunt Ida (Gabrielle Rose), with whom she has been dumped by her older brother Charles (Zachary Bennett): both of them treat Maud as if her mind is as weak as her body. (It isn't: Maud has a certain childlike simplicity—no doubt from being treated as a child all her life—but she is smart, observant, and amusingly sly.) Maud has been waiting for Charles to summon her home, but at the beginning of the film she discovers she has no home to return to: Charles has sold the family house without her knowledge and consent, and plans to leave her with the stern Ida—whom he pays for the inconvenience—forever.

Maud isn't having that, and sets out to take the reins of her own life. In the town store she spies Everett (Ethan Hawke, playing against type very well), a gruff, inarticulate, illiterate fishmonger who is looking to hire a live-in housekeeper. Seeing an alternative to life with Aunt Ida, Maud determinedly applies for the job. She is clearly not exactly what Everett had in mind, but Everett—as his friend Frank (Billy MacLellan) points out—is no bargain either, and women are not exactly beating a path to his door. Maud gets the job. 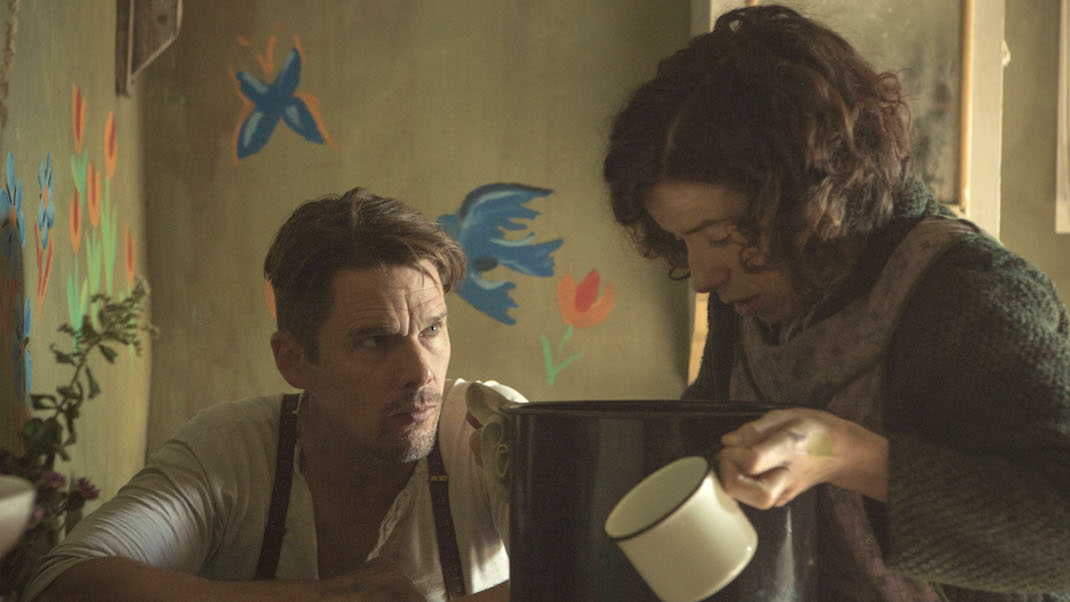 Only someone so desperate for independence as Maud could consider the life she finds with Everett to be a step up. The house the reclusive Everett occupies is a tiny, 12 x 13 foot shack, grey and lifeless and lacking even the modern conveniences of the 1930s. (It has only one mattress in the upstairs loft, an arrangement that has the townsfolk gossiping—to Maudie's amusement—that she is Everett's "love slave.") And only someone as used to cruelty and ostracization as Maud could bear five minutes of Everett Lewis' company. The histories of literature and cinema are replete with stories of women falling for difficult men, but Everett is no diamond in the rough, and there's no handsome fairy-tale prince laboring behind his beast-like demeanor. Angry, gruntingly inarticulate, and occasionally abusive, Everett is not roguishly, charmingly unpleasant: he's just unpleasant.

But Maud doesn't seem to mind, preferring Everett's crankiness to her aunt's condescension and control, and perhaps seeing an opportunity to—for once—be around someone more damaged and socially awkward than herself. (When Everett admits that no one likes him, she disagrees. "I like you," Maud says. "You need me. We're like a pair of odd socks.") Maud—who has found solace in painting all her life—begins bringing a little color into Everett's colorless world: she starts by painting a small shelf green, and—when he doesn't protest—begins painting nature scenes on every other available surface of the house, the dark grey shack transformed into a whimsical fairy-tale world. After a visiting New York sophisticate (Kari Matchett) spots Maudie's paintings and offers to buy one, Maud's work starts earning a little extra money; eventually, she becomes the breadwinner, her work bringing her a quiet fame, and a lot of unwelcome attention to the misanthropic Everett.

But Maudie doesn't play out like the typical artist-biopic: it is a smaller, stranger, more challenging film than that. It would be easy to find Maudie a touchingly sweet love story—albeit one in which the word "love" is never spoken aloud—and it would be equally easy to find it a portrait of almost Stockholm-syndrome-like acceptance of abuse and exploitation. (At lease one of Lewis's biographers has debunked the myth of Maud Lewis as "a happy little elf," and portrayed Everett as a "terrible man" who basically had the crippled artist churning out paintings in terrible conditions to line his own pockets.)

What is remarkable about Walsh's film, however—with credit to Hawkins' nuanced performance and a careful, sensitive screenplay by Sherry White—is how it allows for both of these interpretations, while still painting a portrait of a peculiarly indomitable and unfailingly optimistic woman. The film does not shy away from how dark Maudie's life has been—from casual references to children throwing stones at her, to the revelation of deeper, more traumatic horrors in her past—nor does it overly romanticize her life with Everett. (No one watching this film will walk away thinking, "Yes, that's the way life and love should be.") But it is in the contrast of darkness and light that Maudie manages to be both haunting and inspirational: its pleasures exist in moments of startling color and unexpected kindness that push their way up, like Maudie's flowers, through unforgiving soil where we wouldn't expect any such things to grow.