The B-Side: Elsa Dorfman's Portrait Photography is part of My Summer of Summer Movies, in which I am attempting to see and review every movie that opens (in Chicago) between Memorial Day and Labor Day. Read all about this ill-advised plan here.

Elsa Dorfman is a very affable old lady, and she has lived an interesting life, and she takes very nice pictures of people. These, sadly, are more or less my take-aways from The B-Side: Elsa Dorfman's Portrait Photography, the frustratingly slight new documentary from Error Morris (The Fog of War).

Which is not to say that Dorfman is not an important—even, potentially, fascinating—figure in American culture. In fact, it is easy to see why Morris was drawn to her as a subject. A self-described "nice Jewish girl from Boston" who forged a career as a single-girl in the late 1950s—first at Grove Press in New York, and later at the famous Grolier Poetry Bookshop in Cambridge—Dorfman was a feminist before the word was in vogue, and her endless drawers of photographs are a treasure-trove of cultural icons. Allan Ginsberg—who became a lifelong friend—was one of her favorite and most enthusiastic subjects, but Dorfman also shot Lowell, Borges, Nin, Lordre, Sexton, Dylan, and many other literary and musical legends.

She also carved a particular—and, as it turns out, passing—niche as a portraiture photographer, primarily employing one of the few Polaroid 20×24-inch cameras ever made: the large-scale, instant format produced incredible color and detail, and Dorfman's eye and ease with her models produced photographs of remarkable warmth and life. (Because of the expense of the film and chemicals involved, Dorfman could only take a few snaps of each model: her clients took what they thought were the best ones, and Dorfman herself kept the others, which she calls "the B-sides.")

For more than 30 years Dorfman's camera produced these huge, startlingly intimate portraits of celebrities and average citizens alike, and part of the impetus for Morris's film—and much of its poignancy—comes from the fact that Dorfman finally retired in 2016. (Her retirement had less to do with her own capacity—though now in her '80s, Dorfman is still sharp and energetic—and more to do with the fact that Polaroid, after going through bankruptcy and re-acquisition, stopped making the chemicals she needed for her unusual camera.) 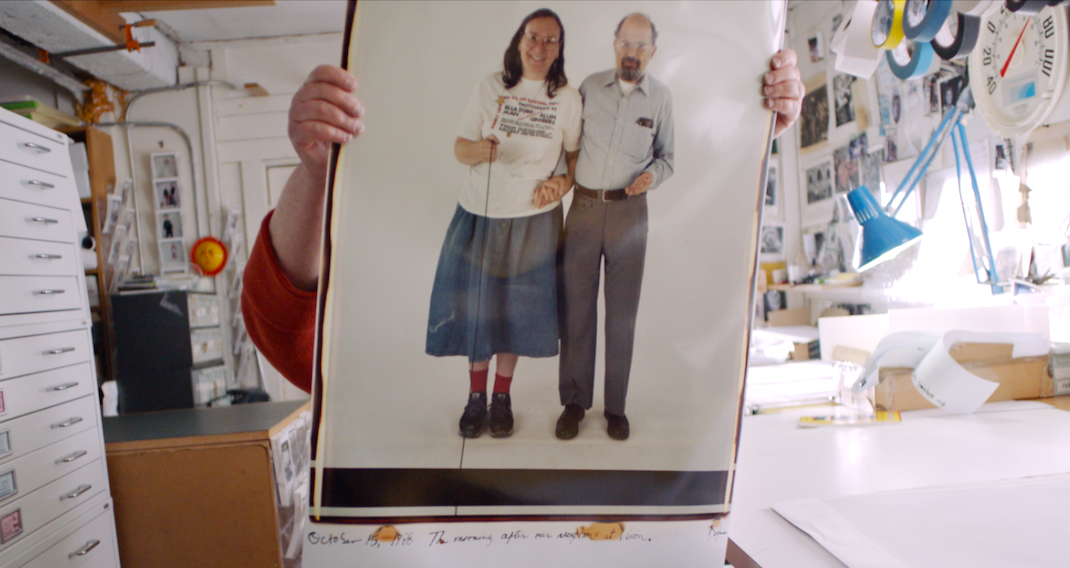 I would happily attend an exhibition of Dorfman's photography. I might even be interesting in watching a dramatized, Mad Men-type TV series based on her life, with Dorfman as a camera-wielding Peggy Olsen leading us on a tour through America's Beat and Counterculture eras. But The B-Side: Elsa Dorfman's Portrait Photography—which consists almost entirely of watching Elsa rifle randomly through her files of photographs—both overstays its welcome and under-explores its subject. Dorfman is a very likable screen-presence, but she is not particularly revelatory about either her life or her process, and neither she nor Morris's film are particularly articulate about what makes her art so special. (It is a problem with the film that Ginsberg—recalled through Dorfman's photography, but also through her recollections and voice-recordings—emerges as the most poignant and fascinating figure in Morris's film.)

Perhaps if Morris had thought to document Dorfman's process before she retired, The B-Side: Elsa Dorfman's Portrait Photography might have achieved the sort of intimacy and moving insight into an artist's work that Richard Press achieved in his 2011 documentary Bill Cunningham New York. (It would have been nice, at the very least, to have seen Dorfman actually take pictures, and to get some understanding of her technique with both equipment and people.) As it stands, however, The B-Side starts to feel, after a while, a little like being trapped in your grandmother's house while she pulls out the photo albums. (It was the moment in which Dorfman shows us a photograph of a couch—and then shows us a photograph of the two guys she paid to move the couch—that I began to lose patience a bit with her friendly but fleeting reminiscences.) And Morris's attempts to make standing around talking with Dorfman in her studio "cinematic" do not help matters greatly: one shot, in which Morris puts the camera inside a drawer Dorfman is opening, just screams of the creative desperation of a documentarian with not enough to document. Dorfman might have made an excellent subject for a documentary short, at 20 minutes or half-an-hour: but, as likable at she is, and as interesting as her life and photographs are, Morris doesn't manage to tap into enough depth or insight to sustain a feature-length film.