Middle Man is part of My Summer of Summer Movies, in which I attempt to see and review every movie that opens (in Chicago) between Memorial Day and Labor Day. Read all about this ill-advised plan here.

Middle Man, the feature debut of writer-director Ned Crowley, opens with a quote from the early 20th century comedian and movie star Fatty Arbuckle: "No price is too high to pay for a good laugh." If you know something about Arbuckle—whose career disintegrated after a highly publicized rape and manslaughter scandal—it's a hint at the darkness Crowley is willing to explore in his film's small, strange nexus of road-comedy and crime drama.

Lenny Freeman (Jim O'Heir, of Parks and Recreation) is a middle-aged, mild-mannered accountant from Peoria, Illinois. After the death of his mother, with whom he lived, Lenny decides to pursue his lifelong dream of being a comedian. (He has never performed in front of an audience, but he is an obsessive student of old school comedy—Jack Benny, Abbott and Costello, Burns and Allen, et cetera—and his mom thought he was a riot.) And so Lenny quits his job, setting off in his mother's '53 Oldsmobile for Las Vegas, to audition for comedy giant Monte Guy's "Stand-Up Stand-Off."

But Lenny, as we learn, is fatally humor-challenged. (It's a nice touch that everyone he meets is, effortlessly, funnier than he is. "I'm not trying to be funny," a sarcastic waitress [Jocelyn Ayanna] tells him. "I am funny. There's a difference." That difference, as Lenny will learn, is all the difference.)

But somewhere in the endless, desolate stretches of desert between him and his unlikely dream, Lenny picks up a hitchhiker called, conveniently enough, Hitch (Andrew J. West). In the manner of road-movies immemorial, the street-wise, fast-talking, foul-mouthed Hitch seems the polar opposite of Lenny in nearly every way. But he's a hustler with show-business connections, so—in a scene with more than a hint of Faustian bargain—Lenny begs him to be his manager. 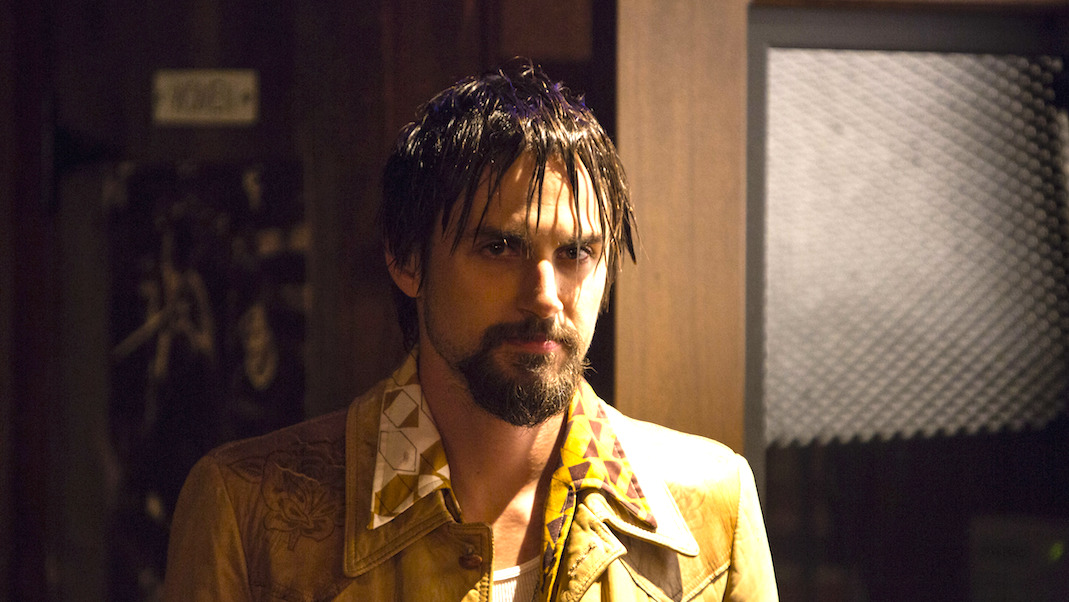 The problem is, Hitch is also—as anyone less naive than Lenny could have guessed by looking at him—something of a homicidal maniac. In a dead-end, one-diner desert town called Lamb Bone, Hitch decides to have Lenny try out his material at a roadside comedy club called The Yuck Stop. Lenny, predictably, bombs horribly, driven off the stage in humiliation by a heckler. By the following morning, the heckler has been beaten to death with a tire iron, and his is just the first of many bodies that end up in the Oldsmobile's surprisingly roomy trunk.

The central gag of Middle Man—the title has several meanings, but explicitly refers to a comedian who is neither an opener nor a headliner—is that Lenny's act gets better as his life descends towards damnation. After Lenny has dismembered the heckler's body and—in one of the film's best sustained bits of physical comedy—attempted unsuccessfully to bury it, Hitch forces him immediately back onto the stage at The Yuck Stop. Exhausted, covered in blood, and almost out of his mind with shock and guilt, Lenny just rambles on-stage about everything that has happened, and the crowd takes his confession as a dark and deadpan masterpiece of comedic performance art. ("You know what the hardest thing about cutting someone into pieces is?" Lenny says, in complete sincerity. "It's the bones.") His "set"—if you'll pardon the inevitable pun—kills.

It's a funny conceit, and behind it is some interesting subtext about comedy. (The clean, wholesome, set-'em-up-knock-'em-down jokes of Lenny's stand-up heroes are hopelessly passé, in a culture where comedy has become about exploiting horror and ugliness.) But there are promising avenues unexplored as well. (If Lenny actually got funnier as his life spiraled out of control—instead of accidentally stumbling into a one-joke bit—that might have provided a bit more insight about the thin line between chaos and comedy.) And the premise—which might have made a perfect short—is not quite enough to sustain a feature-length movie. O'Heir and West are both very good, but they are playing types more than fully developed characters. And, to flesh out the film, Crowley has surrounded them with a cavalcade of individuals who seem to have wandered out of a road-company Coen Brothers production. (Anne Dudek's winsome waitress—a little too symbolically named "Grail"—is one of the more successful ones. One-note figures like a misogynist comedian [Josh McDermitt], a movie-quoting state trooper [Chad Donella], and a defrocked ventriloquist priest [Tracey Walter] are slightly less convincing.)

And Crowley makes some questionable choices, which make the film—which aims ambitiously for the discomforting high-ground of something like Scorcese's The King of Comedy—fall a little short. For example, Crowley decides to play Lenny's first, disastrous stand-up set as a silent, slow-motion montage, his material drowned out on the soundtrack by an aria from Madame Butterfly. We see the reactions of the audience, and we see Lenny flounder, but we don't hear how bad he is. There is nothing more genuinely uncomfortable than watching a comic truly bomb, but Crowley either couldn't be bothered to write Lenny's bad act, or else balked at letting it play out in cringe-inducing real-time. There is something in this choice that epitomizes the film's somewhat surface-level approach to both its characters and its purported treatment of comedic desperation.

Middle Man is a curious film, probably destined to fall somewhere between interesting misfire and undiscovered cult gem. There is good stuff here, to be sure—decent performances, clever dialogue, and some inspired moments of both comedy and pathos. Crowley is a good director, and creates a strong, evocative sense of place, using both the desert and his desperate, nowhere desert town to excellent effect. The film's problem, however, may ultimately be Lenny's problem exactly: it just isn't funny enough, and so increasingly turns more and more towards violence and nihilism. (The final confrontation between Lenny and Hitch is genuinely ugly, in a way that is likely to repulse some audiences while garnering admiration for daring from others.) I am loath to damn a film with the faint praise of "promising," but that was my honest reaction: I see the potential of a peculiar voice here, and I am interested in seeing what Ned Crowley does next.