Megan Leavey is part of My Summer of Summer Movies, in which I attempt to see and review every single movie that opens (in Chicago) between Memorial Day and Labor Day. Read all about this ill-advised plan here.

My regular readers know that I am trying to watch and review every new movie this summer, without discrimination or preconception. But I would be lying if I said I went into Megan Leavey with an open mind. The trailer smelled of phony patriotism—and the shallow military hagiography that tends to accompany it—combined with the allegedly heartwarming schmaltz of a live-action Disney movie. It looked, in short, like what I sometimes tend to prejudicially dismiss as a "red-state movie," and this fear was only reinforced by the fact that I had an entire theater to myself for my (admittedly late-night) viewing. It was a Friday night on the North Side of deep-blue Chicago, and absolutely no one—including me—wanted to watch a heartwarming film about a hero soldier and her hero dog.

All of which makes me a close-minded jackass, obviously, and makes Megan Leavey the best surprise of my summer so far.

To be fair, there are so many ways that this story could have gone terribly wrong, and many of them were made by whoever cut the flag-draped, three-hanky trailer. The difference between the film I was expecting and the film I saw can best be summarized by the scene in the trailer where Megan Leavey (Kate Mara) is asked what she would like to say to Rex, the German Shepard who was her bomb-sniffing partner in Iraq. "I'd thank him for teaching me what love is," we hear Trailer-Megan say, and—cynical bastard that I am—it was this line that guaranteed that my gag-reflex was working overdrive when I walked into the film.

But here's the thing: that line isn't in the movie. The actual line is, "I'd thank him for trying to teach me what love is," and it comes at the end of a longer, genuinely moving scene—which Mara knocks out of the park—in which Leavey struggles to articulate inarticulate feelings about her own emotional isolation. The omission of that one word, "trying," does a terrible disservice to both the complexity of Mara's performance and the remarkable restraint of Megan Leavey.

There's no denying that the true story of Megan Leavey and Rex was—on paper—ready-made for Disneyfication. The real-life Leavey served two tours with a Marine K-9 unit, as the handler for Rex, a bomb-detection and patrol dog. The two spent almost three years together, serving over 100 missions in the combat-zones of Fallujah and Ramadi. In 2006, while clearing a road of explosives, they were both seriously injured when a remote-detonated IED went off at their feet. Leavey, still recovering from her injuries, was honorably discharged in 2007, and tried to arrange to adopt Rex after his own service was over. She was denied by grinding military bureaucracy, however, and spent several years attempting to lobby for support, cut through the red-tape, and provide the veteran Rex a well-deserved home in his retirement.

Even if you don't already know how it all turns out, you can probably guess: the feel-good formula is pretty much built into the story. But director Gabriela Cowperthwaite (Blackfish)—while delivering on all the expected beats—has the rare good sense to trust the story, and protects it admirably from the usual Hollywood embellishment. Rex, for example, is an actual dog: not an anthropomorphized movie dog forced to demonstrate supernatural intelligence, perform cute tricks, and constantly mug for the camera. He's a good dog—and good at his job—but he's just a dog. (You don't realize how phony and overly sentimentalized most movie animals are until you see one done right.) 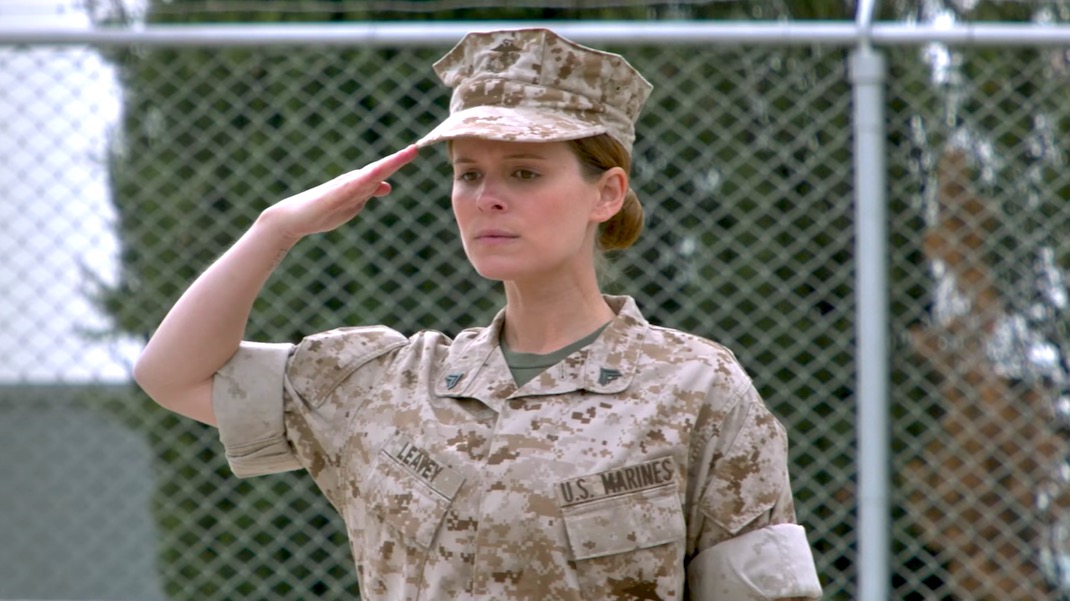 Leavey, similarly, is shown to be a good marine, but she's not an action-figure; she's just doing her job, and the film doesn't feel the need to make her larger than life, or to have other characters repeatedly tell her what a hero she is. (That's unusual for any depiction of a soldier, almost unheard of for a film about a female soldier, and entirely refreshing.) And the scenes in Iraq—which occupy the tense middle of the film—are gritty, deglamorized, and remarkably free from both extraneous drama and patriotic bunk. Mara gives an excellent, complexly layered performance as an imperfect, even difficult protagonist: the Megan we see in the film is a prickly, depressive, and isolated young woman, one who was lost before she joins the military and seems just as lost after she leaves it. As much as Megan Leavey is a feel-good tale about a girl and her dog, it is also—as the title suggests—a sensitive and intelligent character study of a troubled young woman. We sense, even, that her strong attachment to Rex is less about Rex than it is about Megan herself: an expression of her own emotional needs, and a projection of her complicated desire to feel an uncomplicated connection to someone. (Isn't this true of all human/animal relationships, to some extent?)

Make no mistake, Megan Leavey is exactly what it appears to be: a heart-wringing, tear-jerking story about a soldier and her dog. But it's good heart-wringing and tear-jerking, free from sentiment and speechifying, and all the more effective for being understated, emotionally complex, and surprisingly authentic. (There's no point in pretending that emotional manipulation isn't one of the main reasons we go to the movies: we just want it to be done well.) Against all odds, Cowperthwaite has deftly avoided the myriad traps of this material: what could easily have turned into a patriotic recruitment poster or a sappy long-distance commercial turns out instead to be that rarest of things: a "feel-good" movie that actually feels good.