In My Summer of Summer Movies, I'm attempting to see and review every single movie that opens (in Chicago) between Memorial Day and Labor Day. Read all about this ill-advised plan here.

It's rare for a film to genuinely earn both hope and hopelessness, but that's the tiny miracle Ken Loach achieves in the nearly flawless I, Daniel Blake. With scarcely an ounce of sentimentality or artificiality, the film traffics humanely in both the oppressive cruelties and the sustaining kindnesses of poverty, managing to be heart-warming and soul-crushing in almost equal measures. I'll see many bigger, louder, and flashier films this summer, but I doubt I'll see one better.

Daniel Blake (Dave Johns) is a Newcastle carpenter in his 60s, with neither savings nor pension. He is recovering from a major heart attack, and his doctor has told him that he must not work until the damage to his heart has healed. And so Dan applies for Employment and Support Allowance, or what we Americans would call Disability Benefits.

The opening shot of the film is deliberately not a shot at all: Loach plays the credits over a black screen, while we hear Daniel's assessment interview with a (pointedly) faceless agent. She keeps asking him questions she reads robotically from a script, about whether he can walk certain distances, lift his arms over his head, clench objects in his hands, et cetera. He grows increasingly amused and annoyed, struggling to explain that it's his heart, not his limbs, that's the problem. ("We keep moving further away from the heart," he says in exasperation, as she asks about his fingers.)

It strikes us as a funny scene—establishing Daniel's everyman practicality against the officious nonsense of this unseen bureaucrat—but we soon realize there was nothing funny about it. Daniel's artless answers to her ridiculous questions have only given him 12 points out of the needed 15 on some mysterious scale, and he has been classified fit for work. Now, to get any benefits, he must apply for Job Seeker's Allowance (unemployment), creating a situation in which he must pretend to look for jobs that don't exist, and which he could not safely accept if they did.

So, much of I, Daniel Blake concerns Daniel's stubborn, patient battles—"like a dog with a bone"—to eke out some small help from this dehumanizing system, in which his sensible, straightforward needs are met with an impenetrable bureaucracy deliberately designed to make him—and everyone like him—give up. Daniel has never touched a computer in his life, but he gamely tries to navigate the electronic minefield long enough to process an appeal of his status. ("We're digital by default," he is told. "Well, I'm pencil by default," he replies.) These struggles are incrementally frustrating, painstakingly believable, and blissfully free from manufactured movie drama. (Even the big scene that gives the film its title—in which Daniel registers his dissatisfaction in spray-paint on the benefits-office wall— turns out to be at best a brief, futile act of protest.) Dave Johns, while seeming to do almost nothing, is pitch-perfect, embodying Daniel's simplicity and decency in a performance that is—like Daniel himself—utterly guileless. 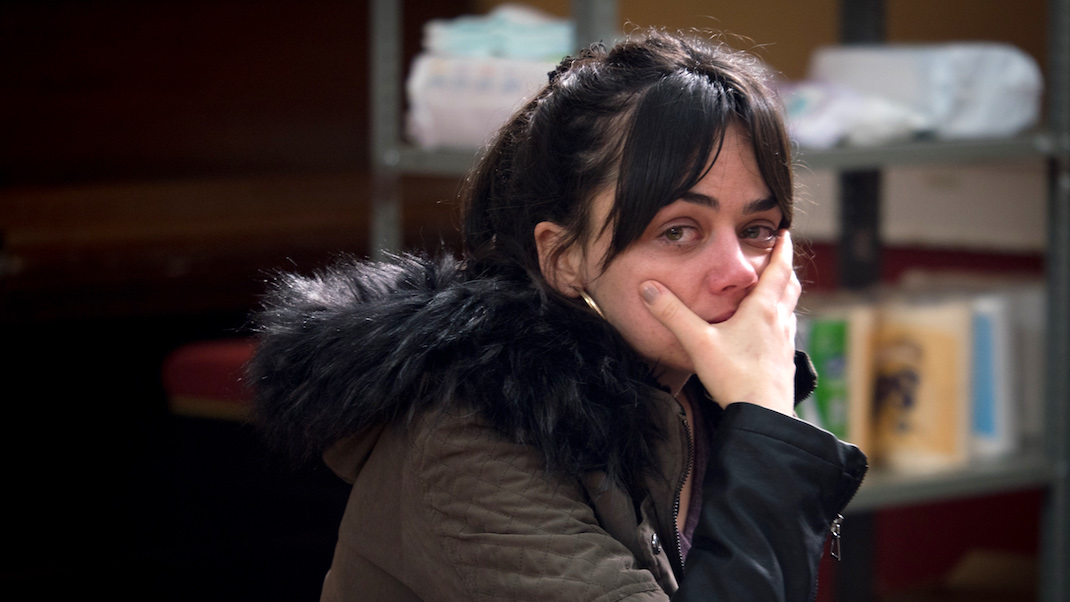 But if Johns' Daniel is the rock-solid foundation of the film, its beating heart is Hayley Squires' Katie, a single-mother Daniel meets at the job center. After two years in a London shelter, Katie and her two small children have been relocated by the system to Newcastle—where they know no one, and have no support—because it was the closest place with available housing. Out of sheer decency, Daniel becomes involved in her family's life, babysitting, making small repairs around her flat, and generally providing what little help and comfort he is able to offer. Between the two of them, we see—through aching specificity that becomes universally relatable—how the system intended to help these people is slowly but surely crushing their spirits and thwarting every effort they make to build even a sustainable life, let alone a better one.

Squires' performance is just astonishingly, heartbreakingly good, and a sequence where Katie breaks down in a food pantry may be one of the most authentically devastating scenes ever captured on film. (I can't even watch the snippet of it in the trailer without getting choked up.) A lot of movies pretend to deal with disadvantaged people, but nowhere have I seen a more shatteringly true depiction of the emotional costs of real poverty: the constant, almost hysterical struggle to stay afloat, and to maintain a shred of dignity, against an unbearable undertow of external humiliations and deep, internal shame.

Without ever reducing its story to simple heroes and villains, I, Daniel Blake is a wrenching portrayal of people who struggle to get by, and a blistering indictment of a welfare system that practically criminalizes them while pretending to lift them up. But the film also provides a powerful, quietly revolutionary counterpoint to the faceless, maddening bureaucracy through the sheer decency and resilience of the people caught up in it. Daniel, for example, has his own maddening problems, but he never hesitates to help Katie, or his other neighbors in need: it would never occur to him to do so, or to treat them with anything less than warmth, and humor, and an astonishing amount of empathy. And he is not alone: throughout the film we see small, almost unnoticed acts of incredible kindness: fleeting moments of actual charity that remind us how the world is supposed to work. Against the backdrop of a dehumanizing system, Loach zeroes in on the humanity, making us walk away from the film every bit as edified as we are outraged.

Loach's direction is a masterclass in social realism, never compromising the authenticity of his observations with an artificial shot, a manufactured moment, or (I think) a single note of non-diagetic music. And the smart, understated screenplay by Paul Laverty is just as spare and uncompromising. (Only the very end of I, Daniel Blake even hints at a screenwriter's artifice, and, by then, one would have to have a heart of stone to make the slightest objection.)

I, Daniel Blake won the Palme d'Or at Cannes in 2016, Outstanding British Film at the BAFTAs, and has picked up a host of awards and nominations at various film festivals. It had a limited release in the States last year, where it was predictably overlooked by the Oscar voter. Now it is in wider release, and I very much fear it will get lost among those bigger, flashier, noisier movies this summer. But to say I, Daniel Blake deserves to be seen is an understatement: it is hard to imagine asking more of a film than this artful, infuriating, and unfailingly humane story.