Captain Underpants is part of My Summer of Summer Movies, in which I'm attempting to see and review every single movie that opens (in Chicago) between Memorial Day and Labor Day. Read all about this ill-advised plan here.

As I was born almost thirty years before the first book was published—and as I have no children myself—you will perhaps not be totally surprised to hear that I am new to the Captain Underpants franchise.

Some cursory research—by which I mean, "I Googled it"—tells me that there are 12 volumes in author Dav Pilkey's series of illustrated children's books, with titles like Captain Underpants and the Attack of the Talking Toilets, Captain Underpants and the Big, Bad Battle of the Bionic Booger Boy, and Captain Underpants and the Sensational Saga of Sir Stinks-A-Lot. These books, I see, have been translated into over 20 languages, have sold over 70 million copies, and are among the most consistently banned books around the world. (Parents and other Puritans are apparently more concerned about the corruptive influence of Captain Underpants than they are about 50 Shades of Grey: those titles were #1 and #4, respectively, on the American Library Association's list of "Most Challenged Books" in 2013.)

All of these factors—the impressive sales, the silly titles, and, especially, the aggressive censorship—suggested to me that maybe the Captain Underpants phenomenon had a lot to recommend it. And this hunch was borne out by David Soren's entertaining new animated feature, Captain Underpants: The First Epic Movie. Every generation has to learn slapstick humor and irreverence to authority, after all—mine took its instruction in these invaluable arts from such spiritual gurus as Bugs Bunny—and it seems to me that younger generations could only benefit from the wonderfully bad examples of Dav Pilkey and Captain Underpants.

After all, what's not to like? Captain Underpants is the story of two boys, George (Kevin Hart) and Harold (Thomas Middleditch), who first bonded in Kindergarten over their shared amusement at the word "Uranus," and have been best friends ever since. As the film opens, George and Harold have created a thriving cottage industry of silliness: they spend their free time writing and illustrating comic books about a superhero they invented called The Amazing Captain Underpants, and they spend their school hours fighting a guerrilla war of practical jokes against the gulag-like educational atmosphere imposed by humorless principal Mr. Krupp (Ed Helms). (Mr. Krupp—toupéed and tyrannical—is the kind of guy whose office is festooned with "Successories" posters that say "AUTHORITY," "DISCIPLINE" and "HOPE DIES HERE.")

When George and Harold are caught on video pulling off one of their elaborate pranks, it provides all the proof Krupp needs to enact his official revenge: he threatens to separate these two grade-school soulmates into different classes. In desperation, George tries to mesmerize Mr. Krupp using a hypnosis ring he got in a cereal box—and, surprisingly, it works. Soon, the boys have transformed their joyless principal into the irrepressibly joyful—if irredeemably stupid—Captain Underpants. 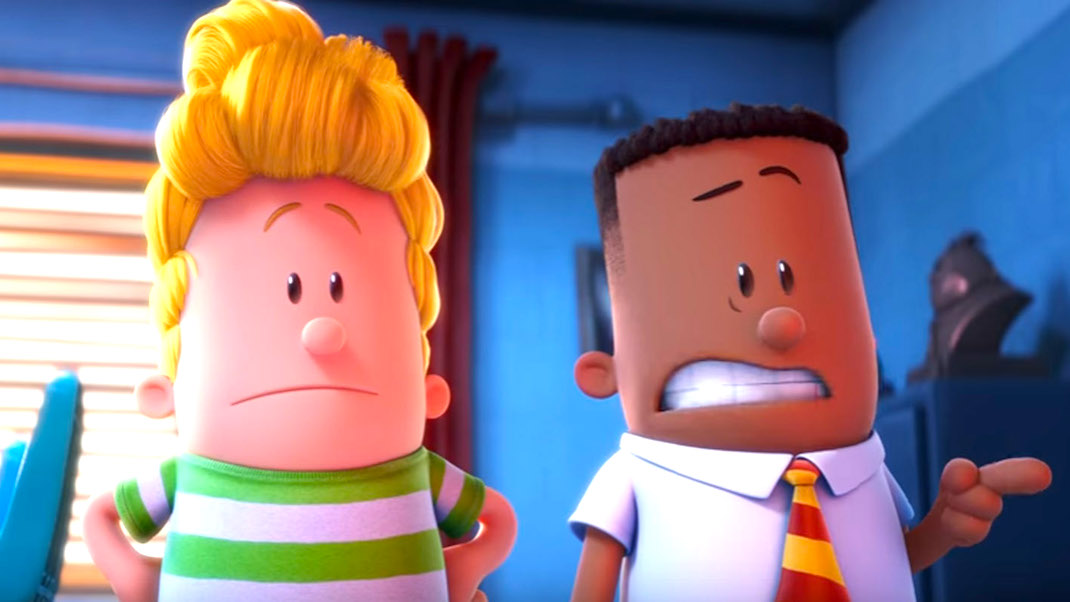 If this scenario sounds slightly silly and madcap—well, you don't know the half of it. This is a film that produces silliness and devours madcappiness at an almost-alarming rate. Scarcely a minute goes by without three new ideas, four sight gags, and five potty-humor references. (And that's even before the arrival of evil scientist Professor Pee-Pee Diarrheastein Poopypants—its a traditional name in his native New Swissland—whose lifelong mission is to eradicate the capacity for laughter in the human brain.)

None of the countless jokes in Captain Underpants is terribly sophisticated, but neither are any of them terribly offensive: they're as gentile and harmless as fart gags and repeatedly getting run over by a car can be. And, at moments, the humor is downright inspired. (Slapstick is an under-appreciated art form, and Soren and his animators execute some fine demonstrations of the craft here. But it's in scenes like the one in which a symphony is played entirely on whoopee-cushions that Captain Underpants achieves an almost transcendent glory.) And Soren keeps the filmmaking itself interesting: George and Harold like to break the fourth-wall in telling their increasingly tall tale, which allows the film to playfully incorporate various styles in addition to its (competent, but less-than-amazing) 3D-animation: we see 2D versions of the crudely-drawn comic books, live-action sock-puppet theater, and—at one point, when the budget runs low—a hastily drawn flip-book that captures the missing moments of an otherwise epic battle scene.

Captain Underpants never aspires to, nor achieves, the profound wisdom and weirdness of someone like Roald Dahl, or the sublime animated flights of Disney and Pixar at their best: it's just not that kind of movie. But it easily manages to stay engaging for its hyperactive 90 minutes. I laughed, many times, often in spite of myself. And, as I looked around at all the parents sitting through this movie with their children, I suspected most of them were pretty okay with being there too.

Having no children myself to corrupt, what I most appreciated was how the film almost completely eschews the treacly moral instruction usually targeted at this age group, opting instead for values I happen to share: the value of a friend who understands you; the value of a well-timed, low-brow gag; and the value of fighting back against humorless authority and a Gradgrindian educational system. (One small complaint: is it too much to hope for that, in future installments of the movies, girls might be included in the resistance? The only female character here is Kristin Schaal's Lunch Lady Edith, a melancholy love interest for loveless Mr. Krupp.)

I'm sure the parents lobbying for Captain Underpants to be removed from school bookshelves—and, soon, DVD libraries—will cite the poop jokes and slapstick violence as the primary sources of their objections. But I guarantee it's the delightful spirit of irreverent rebellion they're really worried about, which makes Captain Underpants the kind of hero every generation needs.