Buster's Mal Heart is part of My Summer of Summer Movies, in which I attempt to see and review every single movie that opens (in Chicago) between Memorial Day and Labor Day. Read all about this ill-advised plan here.

Beautifully shot, compellingly acted, narratively complex, and thematically dense, Sarah Adina Smith's Buster's Mal Heart is a film that resists the simple summations or knee-jerk reactions of the harried critic. Full discussion of both its many strengths and its occasional flaws would require giving away too many of the film's secrets (which I do not want to do). Attempting to make coherent sense of its story—let alone interpret its meaning—would require multiple viewings and a lot of thoughtful contemplation (for which, sadly, I do not have the time).

What I can do is describe a little of what to expect from Buster's Mal Heart, and suggest, without complete confidence, what I think it might be getting at. I can also tell you that—in spite of my minor reservations—it deserves to be seen. At turns funny, frustrating, and harrowing, it's the first film I've seen this summer that reminded me that cinema is an art form, not just a vehicle for entertainment.

Buster's Mal Heart tells its strange story along three points of continuum, the interrelationships of which are more complicated than they appear. The very first shot of the film is an enigma: two men sit in a boat, lost at sea, silhouetted against the sun so that we cannot tell who they are. Then we flash to the frozen woods of Montana, where a posse of men with guns is pursuing "Buster" (Rami Malek), who—we learn from news reports—is a near-legendary wildman of the woods, known for calling into local radio shows with apocalyptic rants, and for breaking into empty vacation homes (and, sometimes, defecating in the cookware). Finally, we resolve on Jonah (also—or still—Malek), the soft-spoken concierge of a large Montana hotel in the late 1990s. Jonah diligently works the thankless graveyard shift, in hopes of saving enough money to buy property where he, his wife Marty (Kate Lyn Sheil), and their adorable three-year old daughter Roxy (scene-stealing Sukha Belle Potter) can live off the land.

The viewer's instinct to piece together a linear narrative from discordant pieces is powerful, and writer-director Smith plays to it in ways that both reward and thwart our expectations. Jonah's section is the most developed and straightforward of the three threads, as we see the young man getting more and more exhausted from his endless night shifts, growing progressively disconnected from his wife and daughter, and becoming increasingly frustrated with making only slow, incremental progress towards escaping the grind of working life. It is all too easy to imagine something causing Jonah to snap, go off the grid, and turn into the raving, hirsute hermit known as "Buster."

Thus we wait, throughout the Jonah segments, for something horrible to happen to catalyze this transformation. And our sense of dread only increases with the arrival of a creepy stranger (DJ Qualls), who rails against "the machine," spouts apocalyptic prophecies about Y2K, and claims to be the prophet of some imminent cosmic event he calls "The Second Great Inversion." 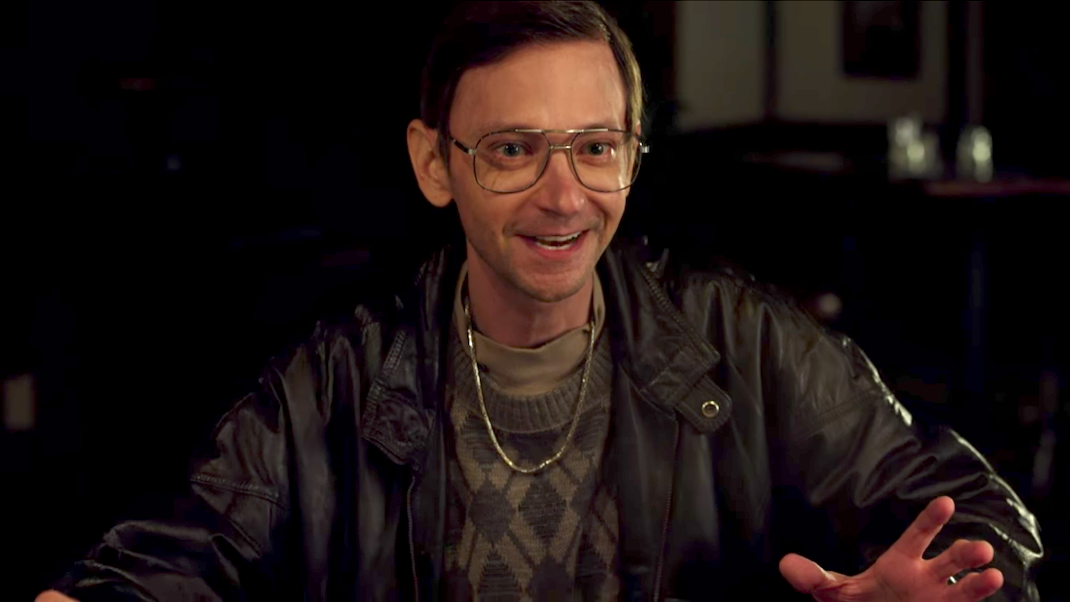 In Jonah's story, we are most safely—if somewhat deceptively—in the territory of psychological thriller. It is simultaneously both the most tightly constructed and the most flawed element of the film. Malek's performance is excellent, as a man who is not only losing his immediate grip on reality, but also has, for some time, been generally standing on the precipice of an existential and spiritual chasm. But Malek's otherwise perfect casting actually plays against the film's surprises: what should be subtle, slow-burn revelations are telegraphed miles ahead for anyone with even a passing familiarity with the Emmy-winning star's work on Mr. Robot. (Malek signed onto this film before his star-making turn in that TV show, making his appearance here both a casting coup and an ironic bit of bad luck for Smith: he is too perfect, making us look for twists we might not otherwise have seen coming.)

But, regardless of whether you see the big twists in this storyline coming—and you almost certainly will—there is far more going on in Buster's Mal Heart than this central plot. From this anchor point we also go forward—sideways?—to Buster's adventures in extra-legal housesitting. And, we also follow a Spanish-speaking version of this same character, lost in a dinghy at sea somewhere in warmer climes, railing against God to go ahead and kill him already. What is the relationship between these stories? Is it linear? Associative? Metaphysical?

The film doesn't provide easy answers, but its bifurcated—trifurcated?—structure is not merely a directorial whim: it reflects the themes Smith is exploring about fragmentation of the self. The film abounds in dichotomies. Jonah exists at night, while his wife and daughter exist during the day. He is a bi-lingual person of color—from an unspecified Hispanic culture—but living in one of the whitest states in the nation. (His resentful in-laws—with whom the family lives to save money—protest Jonah's efforts to teach Roxy Spanish.) Jonah longs for nature and self-sufficiency, while his wife secretly longs for the comforts and security of civilization. (Even the question of what "independence" means is dual-sided: to Jonah, it means quitting his job and living off the land; for Marty, it just means being able to move out of her parents' house and have their own apartment.) From the character-based tensions the film expands outward, exploring metaphysical questions—are the conspiracy theories and cosmic rantings Qualls' character spouts any different from the more familiar language of born-again Marty's church?—and then contracts back inward again to touch on personal, impossible-to-reconcile ethical conflicts of Jonah's soul. (His genuine love for his wife and daughter, versus his powerful longing to just run away from everything.) Smith never lectures on these ideas—and, in fact, barely discusses them openly—but somehow the film is replete with subtle (and, sometimes, not so subtle) provocations about gender, class, religion, ethnicity, and the longing for freedom from the fragmentary oppression of modern life.

It's a lot to be dealing with, and I'm not yet sure the film manages to make these themes coalesce in a coherent way. But I appreciated the effort and ambition, and I very much admired how Smith works it all into a story that remains not just intellectually and aesthetically fascinating, but also emotionally engaging on several levels. There are powerful scenes of familial affection, incredibly harrowing scenes of near-horror, and a surprising amount of effective comedy. (A late sequence—in which the elderly occupants of a lavish house come home to find Buster in residence—could easily have been the basis for an off-kilter feature-length comedy.) Smith's direction—and the cinematography by her husband, Shaheen Seth—is both profoundly lovely and reliably smart, creating a deeply unsettling atmosphere without ever resorting to flashy camera tricks or bargain-basement surreality. Both the musical soundtrack (heavy on haunting versions of hymns and traditionals) and the extraordinary sound-design contribute significantly to the film's quietly disturbing impact.

Buster's Mal Heart may be the textbook definition of a film that is "not for everyone." But those willing to surrender to its peculiar rhythms—and those open to experiencing it, rather than puzzling it out—will find it a haunting and provocative film. At the very least, it marks Sarah Adina Smith—in her second feature, after a film called The Midnight Swim (2014) that I must now seek out—as a serious talent to watch.