Beatriz at Dinner is part of My Summer of Summer Movies, in which I'm attempting to see and review every single film that opens (in Chicago) between Memorial Day and Labor Day, 2017. Read all about this ill-advised plan here.

Beatriz at Dinner is, I suspect, a movie that will be very divisive—and not just because the class warfare of our divided nation is its primary subject. The dichotomies and disagreements within the film's story are fairly stark, and we are asked to take sides in an argument between two political polar opposites embodied in two very strong performances. But I think intelligent filmgoers of any stripe may reasonably disagree on how well—and how fairly—Beatriz at Dinner stages its ambitious debate.

For me, however, the inherent conflict in Beatriz at Dinner is not to be found in its arguments, but in its production. There is an irresolvable tension between what the film is and how the film was made. To put it simply, director Miguel Artera (Cedar Rapids) and his cast have attempted to make a better movie than the screenplay by Mike White (School of Rock) probably deserved.

Beatriz at Dinner is intended to be a comedy of manners for the Trump era. Beatriz (Salma Hayek) is a "healer," a Mexican-American massage-therapist and holistic-medicine practitioner working out of a cancer-treatment center in Southern California. After her car breaks down at the home of wealthy clients Cathy (Connie Britton) and Grant (David Washofsky), Beatriz finds herself invited to a snooty dinner party, where the guest of honor is millionaire real-estate mogul Doug Strutt (John Lithgow). The dinner—which also includes Doug's socialite wife Jeana (Amy Landecker), and two upwardly-mobile young sycophants (Jay Duplass and Chloë Sevigny)—is a celebration of huge real-estate development deal the assembled men just managed to close through legal-shenanigans and unquestionably questionable lobbying efforts.

The discovery of how her pampered clients actually afford her services comes as a shock to the seemingly innocent Beatriz. Years before, Beatriz had helped Cathy and Grant's daughter overcome cancer, and so Cathy thinks of Beatriz as a friend, a part of the family, and practically an angel of mercy. For her part, Beatriz thinks she and Cathy are "spiritually linked," and almost like mother and daughter. The best parts of Beatriz at Dinner come in the early exploration of the limits of this relationship: these two very different women don't really know each other at all, and their shallow, somewhat mutually-patronizing relationship starts to break down very quickly in the forced pretense that they can somehow relate as social equals and spiritual sisters. Cocktail hour, for Beatriz, becomes a minefield of micro-aggressions, as she is alternately treated as a servant, a charity-case, and an adorably exotic pet.

If the drawing-room satire had stayed on this more observational level, Beatriz at Dinner might have been a better—if less dramatic—film. And, though the film's sympathies are squarely with Hayek's character, it plays somewhat fair by making Beatriz far from blameless. Hayek resists the urge to play Beatriz as a saint, insisting on a character who is much more difficult, and perhaps much more damaged. Beatriz's childish optimism and spiritual idealism keep her right on the edge of being an insufferable flake, and she lacks situational awareness and social boundaries in a way that often makes her rather obnoxious. 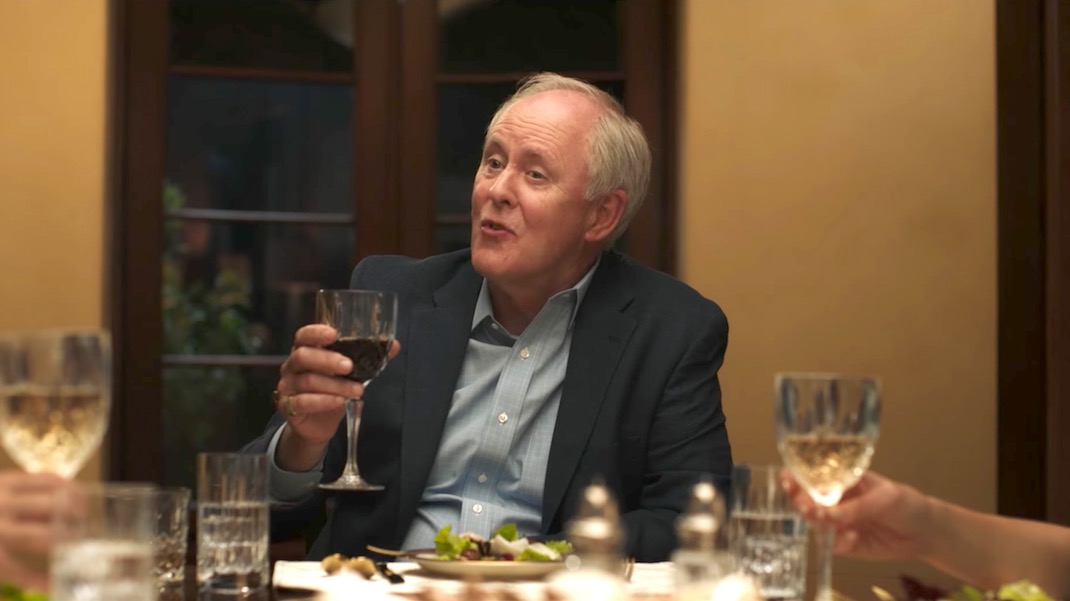 But White's screenplay clumsily stacks the deck by increasingly focusing on Beatriz's conflict, throughout the night, with the odious Trump stand-in Doug Strutt. Lithgow's performance is very good—and he comes across, naturally, as more intelligent and interesting than the real-life figure he evokes—but the character he is playing is an impossible personification of corporate American evil. The problem is not that he is unrealistic—men like him exist and prosper, as we know all too well—but that White's screenplay doesn't really have anything interesting to say about him. There are brief moments when Lithgow manages to infuse Strutt with a hint of rigorously suppressed humanity, but for the most part he represents an impregnable wall of callousness and greed that Hayek's character must bang her head futilely against. It's not a dialogue between two fully-fleshed characters, let alone a debate: it's a dark sit-com set-up that makes Beatriz the only vaguely real person in a room full of cardboard foils. The film's question, therefore, ultimately becomes not whether these two ideologically polarized people can find some common ground, but how Hayek's preternaturally good (if slightly annoying) character will respond to the absolute limits of her idealism and empathy.

It would be almost impossible to assemble a cast this good and make an unwatchable movie, so Beatriz at Dinner feels in the watching a good deal more important and engaging than it does upon reflection. Artera's direction, too, is very good: the overall mood of the piece feels evocative and meaningful, and his camera is far more deft and subtle than any of the material it's capturing. The problem, ultimately, is that White's screenplay doesn't have anything insightful to offer: at best its treatment of the ideological and class wars is shallowly, simplistically descriptive, not prescriptive. We wait in vain for all of this "satire" to say something useful, but the questions it asks are painfully naive, and whatever answers it arrives at turn out to be childishly cynical, even despairing. (The ending—which I won't spoil—is both a cop-out on the film's own premise, and a disappointing infantilization of Beatriz and people like her.)

It is always futile for a critic to mourn a version of a film that wasn't made, but—as good as Lithgow is—I kept wishing that Beatriz at Dinner had left the Strutt character an off-screen presence, and focused instead on Beatriz and Cathy as the story's central conflict. Both actors are excellent, and the well-intentioned relationship between them feels genuine and ripe for subtle exploration. More importantly, it's where the real potential for satiric commentary lay. There is nothing to say about a man like Strutt/Trump: this film feels like a long social experiment to arrive at that painfully obvious conclusion. But there is a lot to say about Beatriz, a woman attempting to believe in a better world than the one she sees; and there is a lot to say about Americans like Cathy and Grant, who think of themselves as good people, but who gleefully benefit from—and perpetuate—the soulless greed men like Strutt personify. There was a smarter, more genuine exploration of the irresolvable rift between idealism and capitalism to be made from this premise, with this cast and crew. It's a shame no one managed to find it.