Band Aid is part of My Summer of Summer Movies, in which I am attempting to see and review every single movie that opens (in Chicago) between Memorial Day and Labor Day. Read all about this ill-advised plan here.

The good news about Band Aid is that it is not—with one or two exceptions—quite as insufferably cute as its premise (and indy-twee poster) might have suggested. The bad news is that it is not quite as realistically grounded or insightfully honest as it needs or wants to be. What we are left with, then, is a passably enjoyable film that falls somewhat between two stools, and which looks frustratingly slight from either seat.

Writer-director Zoe Lister-Jones co-stars with Adam Pally as Anna and Ben, a Los Angeles couple in their 30s who have been floundering in both their marriage and their careers. Anna, who once wanted to be a writer, is working as an Uber driver; Ben, who dreamt of being an artist, is half-heartedly doing soulless corporate design work from his couch. And they bicker, constantly, over chronic domestic disputes: Ben's laziness, Anna's bossiness, and whose turn it is to do the dishes, et cetera. When their couples-counselor (Retta) ditches them and moves to Canada, Ben and Anna seize on the idea of channeling their fights through music by starting a band.

The marriage between the two lead characters feels admirably real and lived-in, through the likable performances of both actors and Zoe-Lister's fairly snappy, naturalistic dialogue. And the idea that they might recapture a little of their marital spark by putting their arguments to music is actually a pretty good idea for a movie.

But Band Aid never fully commits to its own premise. The "songs"—which Anna and Ben seem to improvise at the spur-of-the-moment through alternate verses—are substantive neither as musical numbers nor as genuine explorations of their marital discord. (In both categories, the tunes could best be described as amusing novelty pieces.) For most of the film, the couple's "issues" feel petty and superficial, whether they're spoken or sung about. The film feints at exploring some of the darker sides of marriage, but—even when the couple is screaming "fuck you" at each other—Anna and Ben seem to be delighting in each other's company and their own banter a little too much for Band Aid to be anything but a thin, predictable rom-com. 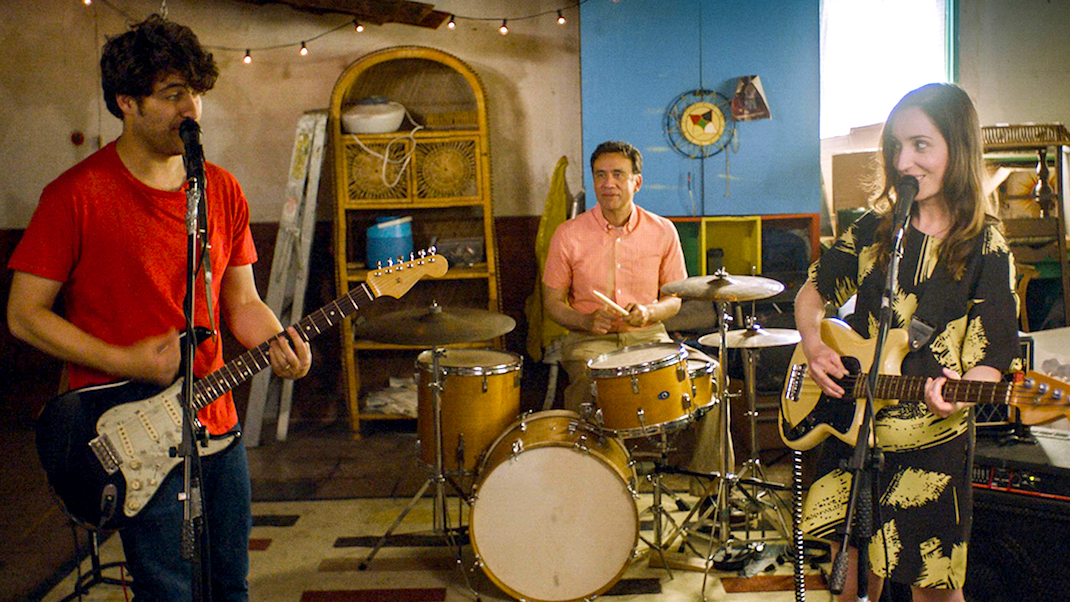 Lister-Jones is to be commended for telling the rare story that is about staying together, not getting together. But a slightly braver screenplay might have explored the real, complexly felt resentments and compromises of a long-term relationship, and Band Aid—though enjoyable enough—never feels that honest. The film too often degenerates into overly simplified "men-are-like-this, women-are-like-that" generalizations that lose any specificity about who these characters are and what's really going on in their marriage. And, frustratingly, the film locates the only real problem Ben and Anna have in something that is well outside of either person's control, which feels like something of a cop-out.

This single root of sadness at the center of Ben and Anna's relationship is also just one of several elements that make Band Aid feel tonally uneven, as though it can never quite decide where on the comedy-dramedy-drama spectrum it wants to exist. There is also the weird, recovering sex-addict next door (Fred Armisen), whom Anna and Ben recruit to play drums behind their musical therapy sessions: he seems to exist in another production entirely, and so do Anna and Ben whenever they enter his world. (That production is not dissimilar to an extended sketch from Armisen's Portlandia, and it's a serious tonal mismatch with both the realistic relationship comedy the film is most comfortable being, and the more serious relationship drama it desperately wants to become in its second half.)

Band Aid is not a bad movie, but it is a disappointingly safe movie. It never really takes the kinds of emotional or creative chances it would need to take, in order to realize its considerable potential or discover wells of true wisdom beneath its surface-level observations. The multi-talented Lister-Jones establishes herself as a talent to watch, but Band Aid has the feel of being what it is: a first feature film, offering more promise than payoff. It's a harmless enough ditty, but Lister-Jones will have to dig deeper if she wants to write a really great love song.