Early in David Fincher's Alien 3, we learn that Ellen Ripley's triumphant victory in Aliens was all for naught: the adorable child she spent that entire previous film saving is now dead, and the only other survivor is dead, and their escape pod was carrying—you guessed it—another alien. (Also—spoiler alert—Ripley herself is infected with an alien queen.) Basically, we realize that everything that happened in Aliens was a cruel joke, that our caring about characters was foolish, that the struggle for survival is meaningless, and that life basically sucks Xenomorph eggs.

If that realization was your favorite moment in the entire Alien franchise, you're in luck: Alien: Covenant has now arrived to take a freshly cynical flamethrower to all of your investment in the story.

Usually, this sort of retroactive narrative nihilism requires a changing of the guard, as when Fincher joylessly torched the work of his predecessor James Cameron. But here, Ridley Scott, the director of the original (and near-perfect) Alien (1979), has come back—for the second time—to do to this franchise more or less exactly what the Xenomorphs do to human bodies. Scott's first return to this universe was 2012's Prometheus, an ambitious but fundamentally flawed re-conception of the story. Prometheus has its defenders—and I admit it's not entirely without curious charm—but ultimately it was a fatally ill-conceived attempt to attach mysterious, overly complicated nonsense about the origins of life and cosmic "Engineers" to what was essentially a simple, body-horror concept. (Was anyone begging for an explanation of how the Xenomorphs came to be? Wasn't the whole point of the first film how terrifyingly, unknowably…well, alien…the damn things were?)

Fans hoping for Scott to deliver more of Alien's chilling horror—or even more of Aliens' thrilling action—were sorely disappointed with Prometheus. Meanwhile, moviegoers who might have been open to following Scott down new paths of metaphysical and existential exploration were ultimately frustrated by the film's turgid mythology, and by its insistence on asking many more questions than it had any intention of answering.

Neither camp is likely to be entirely satisfied with Alien: Covenant, Scott's latest attempt to salvage a thriving narrative out this now clinically schizophrenic franchise. Scott, in interviews, has been recklessly candid about how the tepid reaction to Prometheus led him to more or less completely throw out his blueprints for planned sequels, so he could course-correct his cash-cow franchise and give the fans something closer to what they thought they wanted. The result is a film—co-written by John Logan and Dante Harper—that is more crowd-pleasing, but less interesting, than Prometheus, while still nowhere near as satisfying as Alien or Aliens. It feels exactly like what we now know it is: a pastiche of those better films, with a revisionist nod to Prometheus, all shaped cynically by a focus-group mentality. 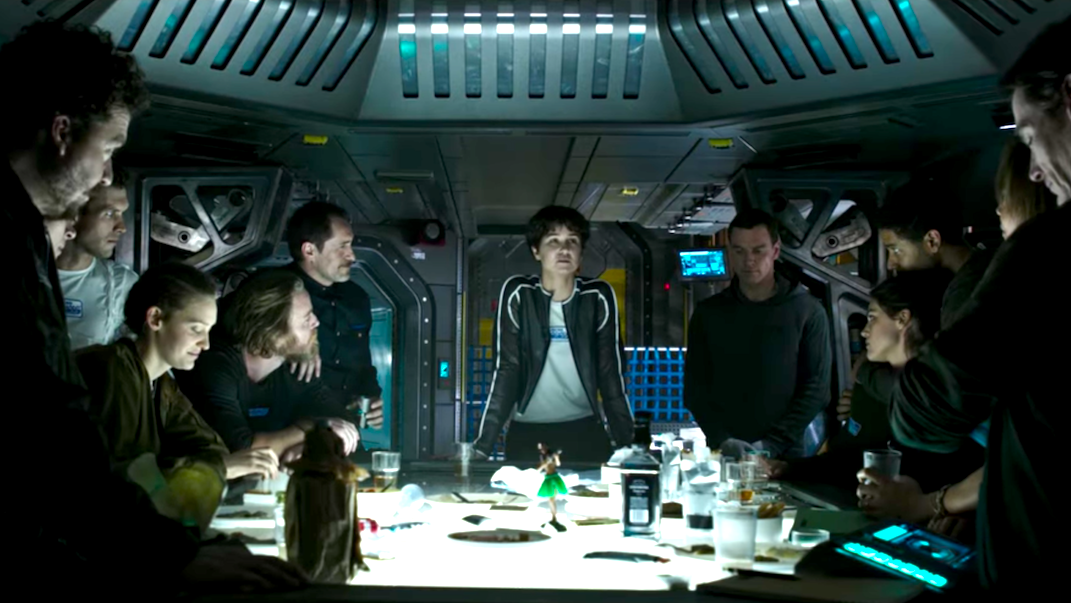 I suppose a brief synopsis of the plot is obligatory, though this necessity is certainly tempered by the familiarity of the film's recycled elements. We have the crew of a ship in deep space, answering a mysterious distress call. We have a derelict alien craft on a seemingly uninhabited planet, and deadly parasites that invade the human body to violently birth monsters. We have synthetic crew members who may or may not be evil, and a plucky heroine having tense battles in cramped corridors, and the necessity to blow things out of airlocks.

The details alone are different. The ship here, the Covenant, is on a colonization mission, with 15 (mostly coupled) crew members escorting 2,000 sleeping colonists to a distant new home. The resourceful heroine is now Katherine Waterston's Daniels, a terraforming expert who—like Ripley—begins the film as third-in-command of her mission, behind her husband James Franco (barely a cameo) and ineffectual man of faith Billy Crudup. (Daniels, it should not surprise you, gets a couple of field promotions as the organizational chart of the Covenant is violently rearranged.) The synthetic crew member is Walter (Michael Fassbender), an updated model of the android, David, who accompanied the mission of the Prometheus ten years earlier. (Walter has a midwestern American accent, in contrast to David's aristocratic British tones.) The distress call, amusingly, is a staticky version of John Denver's "Country Road," leading the crew to set down on a planet infested with alien parasites. (The parasites take new forms—spores and insects join the familiar face-huggers—and so do the creatures they spawn, but the resulting bodily eruptions are more or less the same. None of it is an improvement over H.R. Giger's original, iconically terrifying design.)

It is not much of a spoiler to say that Covenant does indeed dovetail with the end of Prometheus, but it does so much in the same way that Alien 3 picked up where Aliens left off: by setting a purging fire to everything that came before. At the end of Prometheus, survivors Elizabeth Shaw (Noomi Rapace) and David (Fassbender) set course for the world of the giant, albino "Engineers," determined to ask them both why they created life and why they subsequently decided to destroy it. But those questions will apparently remain unanswered: having decided that the enigma of the Engineers wasn't playing with audiences, Scott literally carpet-bombs that entire mythology here, in favor of a new, simpler, equally unsatisfying origin story for the Xenomorphs, centering around David. Larger mysteries are casually referred to, and ideas of theology and faith are name-dropped, but it doesn't feel like there's any real point to it all: it barely connects to the past of the franchise, and it hints at nothing promising for the future. However sincere Scott's desire to do something deeper and more profound with Prometheus, he doesn't make more than the slightest head-feint towards any kind of vision here. 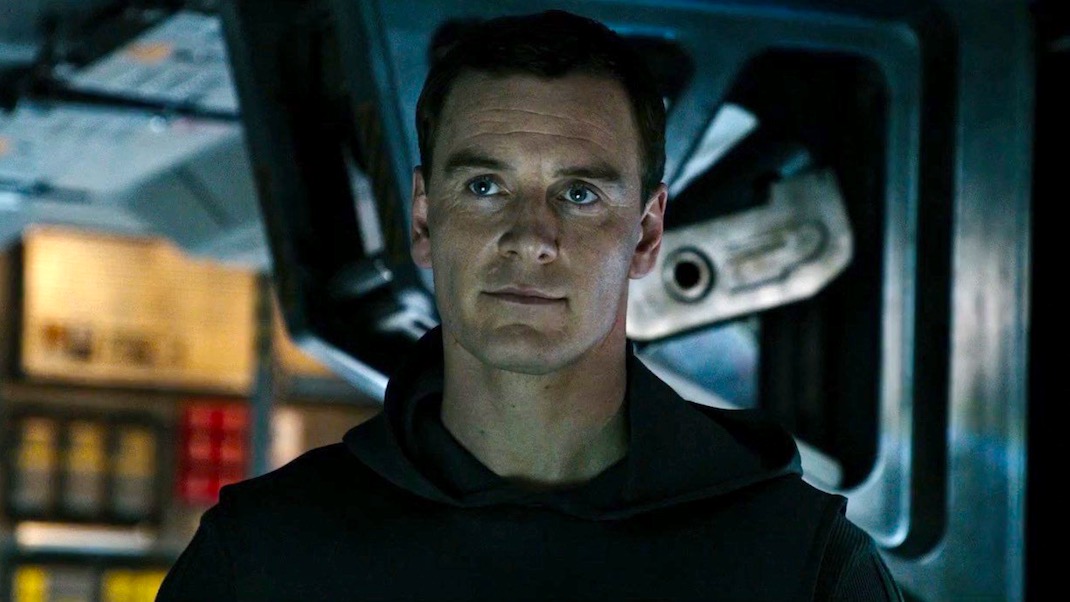 Waterson affords herself ably (as an underwritten character), as do supporting actors like Danny McBride, Amy Seimetz, and Demián Bechir (in even thinner roles). But the film belongs—as Prometheus did—to Fassbender, in the dual roles of Walter and David. The broad strokes of the Walter/David story are both unsatisfying and painfully—laughably—predictable, but there are some lovely interactions between the two characters which feel fresh and new: this portion—occupying the middle of the film—feels like the only part of the movie Scott was genuinely inspired to make.

The rest, sadly, is a patchwork of reconstituted action and horror scenes from better Alien movies. It's true, these scenes largely (though not entirely) work: Scott still has a gift for atmosphere and design, and his visual storytelling remains very good. Individual sequences and set-pieces are never quite scary, but they are admirably tense and exciting. Scott has always had an excellent control of pace, which is key to generating the suspense needed for both action and horror. As a result, those hoping for nothing more than a better thrill-ride than the tepid Prometheus provided may leave the theater satisfied.

Unfortunately, these individual sequences are just that: they are enjoyable—even nerve-wracking—on their own, but they somehow never add up to any kind of narrative or emotional momentum: after a while, they start to feel like the repetitive beats of a slasher film. (A shower scene, Ridley? Really?) Alien and Aliens each had a relentless narrative drive, constantly barreling towards perfect inevitability; Covenant just feels like a bunch of gory stuff that happens, staggering and lurching aimlessly towards a predictable and dispiriting ending.

I should admit that—on a popcorn level—I enjoyed Covenant more than Prometheus. But I say this with a certain sadness, for Prometheus was by far the more interesting vision, and it felt like something Ridley Scott actually cared about making. Now, it feels like Scott is dancing joylessly with the tired Xenomorph out of obligation alone. He has no lingering affection for the acid-blooded bastard—he admitted as much, in explaining why he all but left it out of the last film—and it's a little painful to see him go through all the familiar steps here, to the uninspired beats of a clichéd cover song. There's no denying that Scott still has some moves, but I'd rather see him dance to his own tune, and with a partner of his choosing.