Any hack director can provide effective gore or jump-scares: that's the low-hanging fruit of horror-movie making. (And—as the success of franchises like Saw, The Conjuring, and Paranormal Activity proves—it's always good for a buck.) But, to become a classic in the genre, a horror film needs to tap into something more substantially disquieting. The truly great scary movies—among which I'd count Night of the Living Dead, Rosemary's Baby, The Exorcist, Alien, and Halloween, to name just a few—are all perfectly of their times, slyly channeling the spiritual fears and societal anxieties of their respective eras.

The 21st century has produced some great, genuinely unsettling horror films—like The Babadook, It Follows, and The Witch—that have more on their minds than throwing things at the screen to startle viewers. And I am happy to report that Jordan Peele's Get Out belongs in this more honorable company. Socially insightful, seriously unnerving, and brilliantly self-aware, it's easily the smartest horror film since The Cabin in the Woods.

Daniel Kaluuya (Sicario, Black Mirror) plays Chris, an African-American photographer going home for the weekend with his white girlfriend Rose (Allison Williams, of Girls) to meet her upper-class suburban family for the first time. "Do they know I'm black?" he asks her, but she promises that his race won't be an issue. "My father would have voted for Obama for a third-term, if he could have," she offers, by way of reassurance.

That clueless comment—which gets repeated several times in the film—is a fair indication of how this weekend will be a nightmare for Chris even before anything out of the ordinary happens. (And Williams is perfectly cast, using to excellent advantage the air of white privilege that can make the characters on Girls so insufferable.) White people in this film—like Rose's aggressively ingratiating father Dean (Bradley Whitford)—are constantly rushing to tell Chris how much they love Obama and Tiger Woods, telling him how Rose's grandfather once competed against Jesse Owens, or asking him to pontificate on "the black experience in America." Like most of the elements in Get Out, these interactions draw on razor-sharp observations about racial relations that would have fueled a satirical sketch on the director's late, lamented show Key and Peele.

But Jordan Peele is developing his familiar themes in—no pun intended—an entirely different key here. Some of Chris's interactions with white people are funny, but it's a very uncomfortable form of comedy, and the tone is serious and increasingly menacing. And our empathy is entirely with Chris, as we experience—even before more traditional horror elements creep in—the constant, exhausting tension of constantly navigating the micro-aggression minefield of White America. (Kaluuya is fantastic: he gives a very real, very inwardly-turned performance, letting us just glimpse the anger, discomfort, and disbelief beneath the mask of patient politeness he is, we know, all too used to wearing around white people.)

Part of the genius of Get Out is in the way it subverts horror movie traditions to make its politically astute points. Where films like Halloween played on white fears that something dangerous would invade the reassuring security of the suburbs, Get Out reminds us that the suburbs have only ever felt safe for white people. A clever cold open, for example, finds Atlanta star Lakeith Stanfield wandering alone at night down the same sorts of tree-lined, picket-fenced suburban streets where Michael Myers once stalked his dangerously complacent victims. But here, Stanfield's character is both invader and victim, and he's anything but complacent. His nervous presence evokes the dangers the suburbs offered Trayvon Martin and Renisha McBride, and his justifiable fear comes from awareness that these "safe" neighborhoods were more or less built to keep people like him out.

And this theme is developed and expanded upon throughout the film. The stately brick mansion of Rose's family is a familiar setting from any number of home invasion movies like The Strangers, Funny Games, and You're Next, but here it's the invader, Chris, who grows steadily uneasy. Dean, Rose's father, is a little too welcoming: with his white liberal dialogue pocked with overcompensating expressions like "My man!", his smarmy enthusiasm borders on sinister unctuousness. Rose's coldly serene mother Missy (Catherine Keener), a psycho-therapist, seems a little too interested in hypnotizing Chris to cure his nicotine addiction, her maternal concern edging—imperceptibly, but frighteningly—into menace. Rose's oily brother Jeremy (Caleb Landry Jones), meanwhile, just seems obsessed with testing his physical prowess against Chris's in a wrestling match. 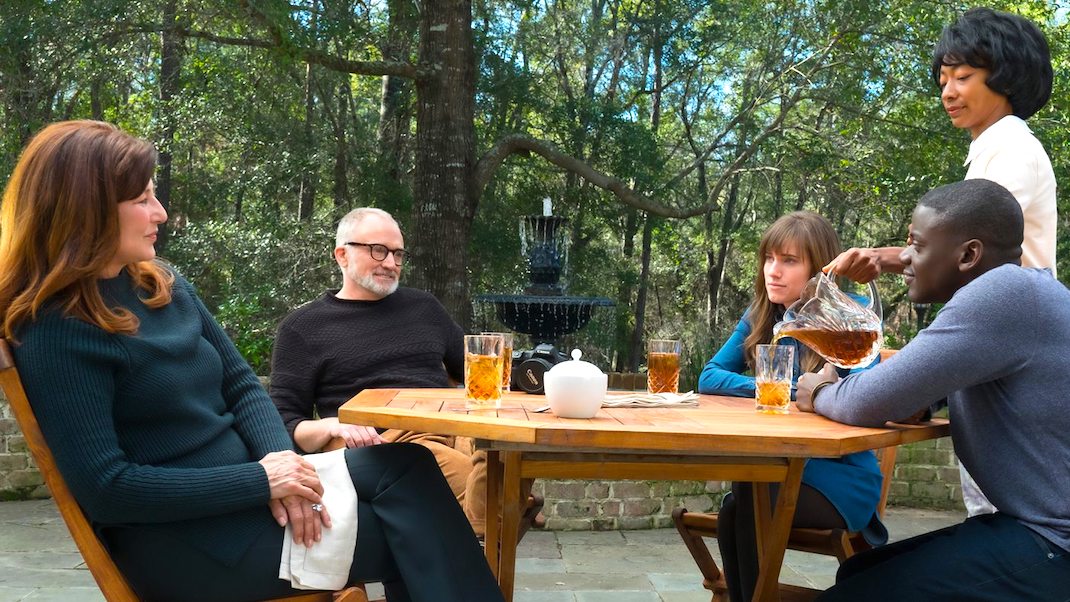 But if the white people are unnerving, it's in a way that doesn't particularly alarm Chris. (It's an authentic touch that Rose is more horrified at her family's behavior than Chris is, and gets more recklessly angry with a racist cop they encounter: he's experienced this sort of thing all his life, after all.) But Rose's family also employs two placid black servants, Walter (Marcus Henderson) and Georgina (Betty Gabriel), who—as Chris says to his friend Rod (LilRel Howery)—seem to have "missed the revolution." (Rod—through a series of phone calls with Chris—provides most of the comic relief in the film, and Howery is very funny. But, more importantly, the character of Rod provides Chris with an authentic black ally amidst all the weirdness, someone who can validate his experience, and someone with whom he can lower the exhausting mask he must wear with all these white people.) The strange, Stepford-like behavior of the black people at Rose's house begins to suggest that Get Out is the opposite of a home-invasion horror film: the real threat, here, is not invasion but assimilation.

It would be a crime to reveal any more of the film's plot, or hint further at the truth behind the disturbing mysteries that Peele layers in so carefully. Key and Peele proved, through its spot-on movie parodies, that its creators understood the art of cinema perfectly. Here—in an astonishingly assured directorial debut—Peele puts that knowledge to work on a film that is not a pastiche or send up of horror films, but a smart, incredibly effective example of the real thing. His patient, subtle direction builds the tension in ways that are not often B-movie "scary," but deeply and spiritually disturbing as only the best horror can be.

And the insanely smart screenplay is operating on several levels, and succeeding on all of them. Those simply hoping for an entertaining scary movie about culture clashes will find it, and enjoy it thoroughly. But those willing to dig deeper—and enjoy the multiple viewings the film deserves—will recognize Get Out as the first great horror film of the Black Lives Matter era, exploring vital themes about the legacy of slavery, the continued objectification and exoticization of black bodies, the appropriation of black culture, and the dangerous, insidious lie of a "post-racial" America. Best of all, these two purposes—the viscerally entertaining and the politically insightful—are not working separately, but perfectly in harmony. (Even the violent third-act—in which the horror-movie shit really hits the fan—is cleverly informed by the racial differences implicit in the film's title. "Get Out!", of course, is a line from a classic Eddie Murphy routine about how white people and black people react differently to horror-movie tropes, and we see Chris thrillingly not making the mistakes stupid white people are constantly making in horror movies.)

And it is safe to say, I think, that black people and white people may well experience this film differently overall. My wife (who is black) and I (who am not) saw it with a predominantly white audience on the north side of Chicago, and it seemed to strike that audience as much more of a comedic satire than it did us. Make no mistake, the film is funny, but it is also dealing intelligently with important, deeply troubling themes, and it is filled with truths that are not so much satirical as uncomfortably accurate. Whether you leave the theater amused or disturbed may well depend on your own experiences, and on how open you are to what Get Out has to say.

But, I hasten to add, this accessibility to different audiences is a feature, not a bug: everyone, as far as I could tell, thoroughly enjoyed the film, and in fact I don't remember a screening in recent years with so much spontaneous applause. Jordan Peele has made a fantastically effective horror movie that works for any audience, on every level with which they are willing to engage it, and that's one of the things the horror genre can do when it is done this well. If I ever regretted Key and Peele's decision to walk away from their brilliant T.V. show, I do so no longer: if this kind of work Jordan Peele left Key and Peele to do, I'm just excited to see what comes next.