Every review of a new film by Alejandro González Iñárritu now opens in the shadow of critic Scott Tobias's take on the director's 2014 film Birdman for The Dissolve. "Alejandro González Iñárritu is a pretentious fraud," Tobias began that instantly-legendary piece, and I suspect every other reviewer reading it envied—as I did—the succinctness of Tobias's assessment and the boldness of his critical glove-slap.

I can't compete with Tobias's opening salvo, but it's an assessment with which I tend to agree. There is a thing that happens with some filmmakers, in which their ability to capture breathtakingly beautiful images seems to convince them—and other people—that they also have poetry in their souls. Our most celebrated directors are mostly writer-directors, but these are two entirely different skill-sets, and the sad truth is that not everyone has been gifted equal talents with both a pen and a lens. (In the multiplexes, James Cameron is perhaps the most obvious example of a technically talented filmmaker who has grown increasingly delusional about his own profundity; on the art-house side of town, I think Terrance Malick's genuine artistry with a camera often has to compensate for his occasional tendency to overestimate the lyricism of his words and ideas.)

There are great directors who simply aren't great writers, and with each film Iñárritu has made, since his debut Amores Perros, I've grown increasingly convinced he's one of them. Films like 21 Grams and Babel were constructed as formally gimmicky melodramas: their visual beauty and heavy-handed narrative machinations fooled a lot of people into thinking Iñárittu had something to say about fate or universal human experience. Their narrative tricks struck me, however, as the deliberate obfuscations of a terrible storyteller, designed to create the illusion of depth from shallow banalities.

Last year's Birdman was, similarly, a crowd-pleasing piece of flim-flam filmmaking, with its camera and talented star pivoting maniacally around a screenplay that was somehow both overly simplistic and self-indulgently inscrutable. This marriage of technical bravura to auto-fellating affectation hit the sweet-spot among Academy voters, of course: the film took home trophies for screenplay, directing, cinematography, and picture. (I'm over it: really.)

But film is a visual medium, and Iñárittu—pretentious fraud though he is—has substantial talents in that department. These talents are magnified tenfold when he is paired—as he was on Birdman—with Emmanuel Lubezki, one of our greatest living cinematographers. So the first piece of good news about The Revenant—Iñárritu's latest dose of misery porn—is that Lubezki is back. The second piece of good news is that The Revenant plays to the considerable strengths of both men, and minimizes opportunities for Iñárritu to indulge his considerable weaknesses. It's a sumptuous, harrowing visual experience, with a minimum of any kind of writing, pretentious or otherwise. 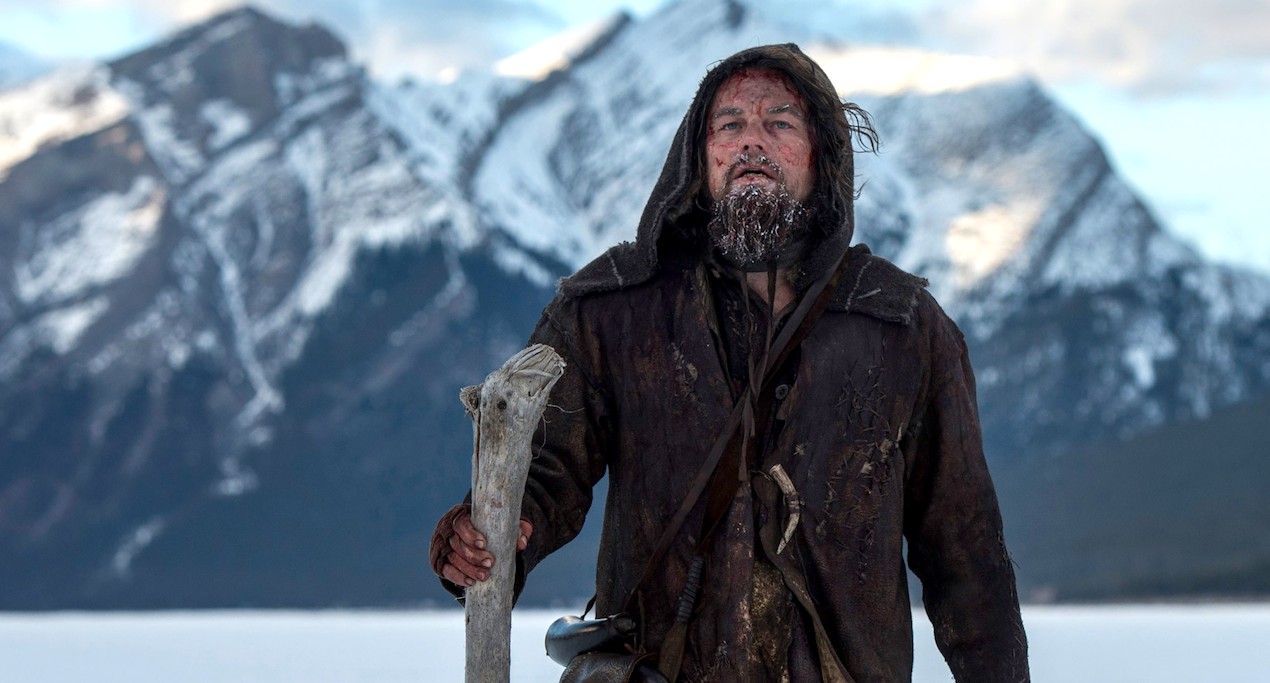 The Revenant is loosely based on the novel of the same name by Michael Punke, which was itself loosely based on the real life and legend of Hugh Glass, an early 19th century frontiersman and fur trapper. Leonardo DiCaprio plays Glass, who—as the story opens—is serving as guide for a fur-trapping expedition led by Captain John Henry (Domhnall Gleeson, the hardest working Weasley in show business).

Along with Glass on this expedition is his teen-age son Hawk (Forrest Goodluck), whose late mother was a Pawnee woman (played, in flashbacks and dream-sequences, by Grace Dove). These two Native characters are Iñárritu-invented contributions to the Hugh Glass legend, and they are (not coincidentally) the weakest elements of the film. An obvious attempt to humanize a figure Time magazine once called "the angriest man in American history," Hawk and his late, nameless mother serve as excuses for gauzy dream sequences filled with emotional manipulation and pseudo-Native wisdom. ("The wind cannot defeat a tree with strong roots.")

More problematically, there are other Native American "characters" throughout the film, including Powaqa (Melaw Nakehk'o), a young woman who exists in the story only to be raped by white men; and Powaqa's father Elk Dog (Duane Howard), who leads a ruthlessly violent quest to get his daughter back. Never developed as actual characters, these Native figures become the repositories for Iñárritu's love of shallow profundity: offering token representation of the white man's crimes, they are what allow the film to pretend—unconvincingly—that it has more on its mind than gorgeous scenery and ultra-violence. (DiCaprio's invocation of First Nations issues in his recent Golden Globe acceptance speech was almost certainly just the first of many such preposterous spin-doctorings we'll endure this awards season. Having now seen the film—in which the indigenous characters are alternately sanctified, demonized, or fridged—I can say these claims of an important message land with the same phony solemnity as Cameron's infamously self-congratulatory acceptance speech for Titanic.)

Which is a shame, because The Revenant is strongest when it admits it is nothing more than an excuse for ultra-violence amidst gorgeous scenery. The opening sequence, in which the fur-trapping expedition is beset upon by attacking Arikara warriors, is a stunningly brutal piece of work. It puts to good use many of Iñárritu's signature flourishes—such as ridiculously long takes—in service of unimaginable chaos that will remind viewers of the opening scenes of Saving Private Ryan.

It is after their near decimation in this attack that tensions begin to rise within the white expedition. Their numbers reduced, they are forced to abandon the valuable stores of furs they have collected, a decision that doesn't sit well with grizzled John Fitzgerald (an excellent—if typically unintelligible—Tom Hardy). Captain Henry has absolute faith in Glass, but Fitzgerald does not, and his resentment of the better man is the ticking bomb that will set the story in motion. (Hardy gives the best performance in the film, playing a physically strong, weak-willed man who has made conniving and cowardice a sort of perverse moral philosophy.) After Glass is nearly killed by a bear—another remarkably horrific bit of filmmaking—he is left in the care of his son, another young soldier (Will Poulter), and Fitzgerald, with the inevitable scenario of betrayal, survival, and revenge unfolding. 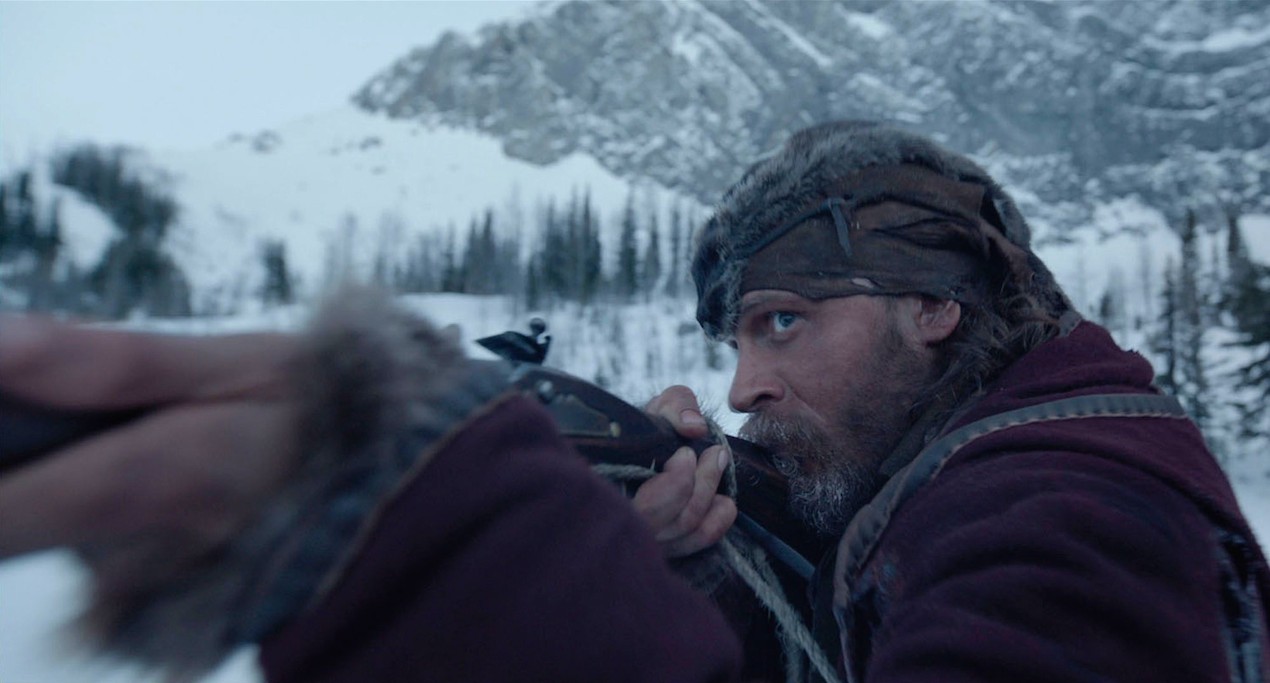 I am deliberately not giving away any more of the plot of The Revenant, for there is very little plot to speak of in its 156 minutes. As I said earlier, this is actually to the film's advantage: neither dialogue nor plot are Iñárritu's strong suits, and here there is little of either. Most of the film consists of DiCaprio's Hugh Glass making his way, alone, back through the starkly beautiful scenery, enduring—and improbably surviving—all manners of violent and gory disasters on his way to enact his bloody vengeance against Fitzgerald. Lubezki's cinematography is indeed spectacular, creating a desaturated, immersive aesthetic that captures the indifferent majesty of the untamed wilderness. (The story takes place in what would now be North Dakota, but was filmed in the harshest reaches of British Columbia and Argentina.) As a merciless action film married to a hellish National Geographic special, The Revenant works beautifully. It's as if Ansel Adams had shot a snuff film, or if Terrance Malick helmed a live-action Wile E. Coyote cartoon. (DiCaprio's character survives just about everything but pianos and anvils falling on his head.)

I suppose I should say a word about DiCaprio's performance, which will almost certainly net him the Academy Award for Best Actor that he has been denied four times before. DiCaprio is an actor who has never really worked for me. (I find him, in general, unconvincing.) But, just as the film plays to Iñárritu's strengths, so it plays to DiCaprio's: he has very little dialogue to deliver, and virtually no spectrum of emotions to traverse. His character's experience is invariably, incessantly grueling, and DiCaprio's sole task—which he manages admirably—is to look suitably begrueled. (Which is not a word, but should be.) The physical pain, emotional anguish, and righteous anger DiCaprio embodies might even make him deserve the trophy he will probably receive, if Iñárritu had bothered to make Glass a substantial character. But the attempted humanization of giving Glass a family is utterly unconvincing, and there is little else but suffering and grim determination for DiCaprio to work with. Glass is ultimately such a dull, one-note character that we watch his unlikely survival story with fascination, but without investment. (I was curious to see if he could make it, but not anxious: I assumed he would, and I didn't particularly care if he did.)

In the end, I appreciated The Revenant for what it actually is (a visually spectacular hair-shirt of a film), and in spite of what it is not (narratively interesting, inspirational, humane, smart, or deep). At its cold, angry heart, the story is nothing more or less than a tall frontier adventure tale embedded within a traditional revenge scenario; it is prettier, but by no means more substantial, than a hundred other B-movie Westerns. To call it Iñárritu's best film in years is accurate, but misleading. In The Revenant, Iñárritu has stripped away most—but by no means all—of his narrative pretensions, and delivered a purer form of what he has always offered: beautiful, miserable banality.