At the beginning of Deniz Gamze Erguven's Mustang, five Turkish sisters—ranging in age from the cusp of adolescence to the borders of adulthood—roughhouse with some boys on the beach after school. Their school uniforms soaked, their school ties wrapped around their heads, they sit atop the boys' shoulders and play a game of chicken in the waves, laughing and splashing and arguing heatedly over whose turn is next. It is a joyous, exuberant sequence, capturing perfectly the wild, reckless, uninhibited freedom of youth.

In the following scene, however, the girls are driven at gunpoint from a neighbor's garden for stealing apples, and the symbolism can hardly be lost on us. But Erguven's beautiful first feature is too subtle and delicate to be reduced to any simple parable of lost innocence or sexual awakening. The sexuality of the girls becomes an obsession of the people around them, but it is neither their preoccupation nor the focus of the film. Erguven and co-screenwriter Alice Winocour have more interesting and elusive themes to explore, like the bonds of sisterhood, the necessity of rebellion, and the importance—and difficulty—of a woman owning and controlling her own body.

At turns heartbreaking and hilarious, oppressive and liberating, tragic and triumphant, Mustang is easily one of the best pictures of 2015, and the gorgeous debut of a major new director.

Seen through the point of view of the youngest sister, Lale (a fantastic, furious performance from newcomer Günes Sensoy), Mustang chronicles the months following the beach scene, which has scandalized the small Turkish village in which the girls live. Despite their protestations that it was just a game, the behavior of the girls is called "obscene," "depraved," and "disgusting." (They rubbed their crotches on the necks of boys!) They are beaten, and immediately hauled off to the doctor for virginity tests. In the views of their guardians—their uncle Erol (Ayberk Pekcan) and their grandmother (Nihal G. Koldas)—the girls have been allowed to roam wild too long, and it is time to take them firmly in hand.

And so begins a long and increasingly oppressive attempt to deny them the freedoms of childhood and any autonomy in their own lives. Clothes, books, phones, and computers are taken away; locks are put on doors; walls around the house are fortified; and eventually bars are put on windows. A bunch of stern older women come to instruct the girls in domestic skills, and a series of single men are brought around as marriage prospects. "The house became a wife factory," Lale narrates.

But, with each turn of a new repressive screw, the girls find ways to fight back, express their individuality, and claim ownership over their own bodies. Shrouded in conservative, "shit-colored" dresses, they tear the seams to create a flirty slit up the leg. Locked in the house, they wear bikinis and bathe in the sunlight that streams between the bars. In their bedroom, they fashion an ocean of blankets, dive in, and "swim" beneath the waves. And, in one primally joyous segment, they sneak out to attend a football match, dancing and cheering and screaming in an unbridled revelry of the freedoms that their society would reserve only for men.

It would be easy to read the film as a condemnation of either the nation of Turkey or the Islamic religion, but Mustang feels both wonderfully and horrifyingly universal. Religion, in fact, is scarcely mentioned, and the way the film captures how the behavior and bodies of young women are constantly subjected to public interpretation has resonance far beyond Turkey's borders. 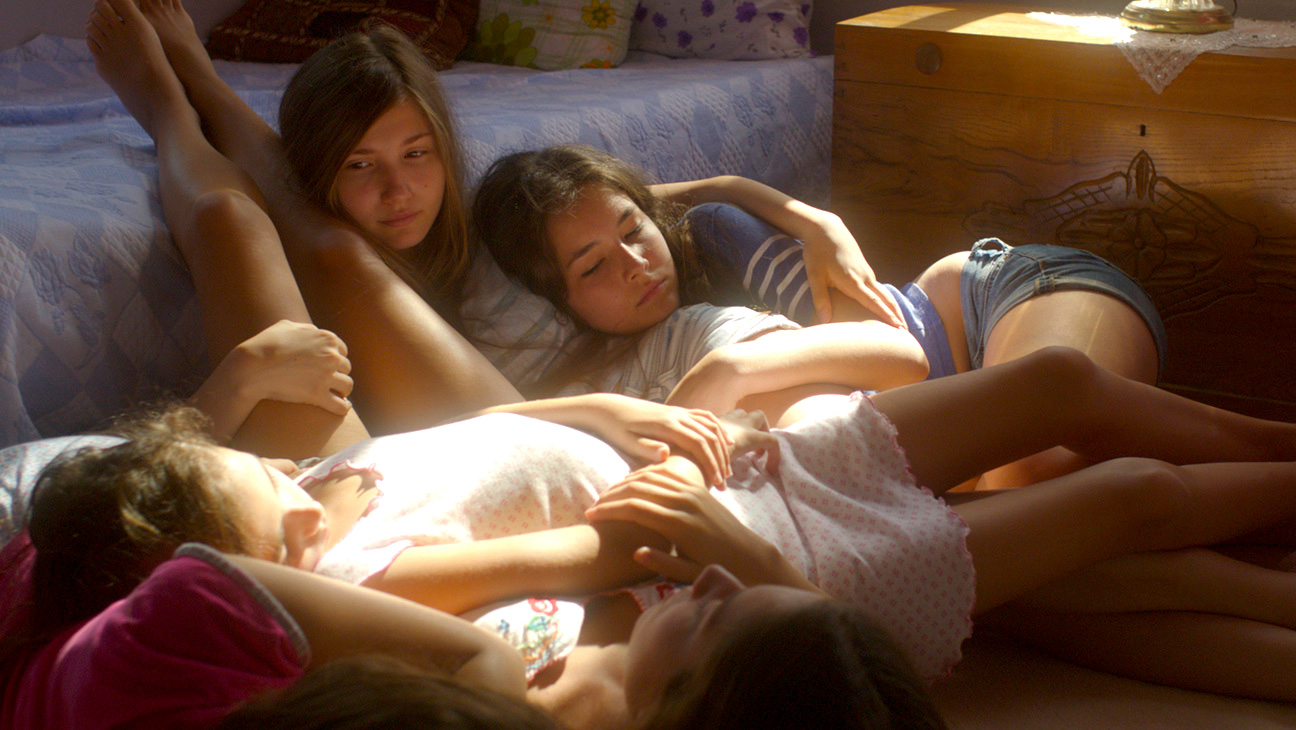 The magic of Mustang lies not in its condemnation of patriarchy—which provides turns both dark and tragic—but in its celebration of the irrepressible spirit of these girls. Erguven gets startlingly naturalistic performances from all five of her leads—Ilayda Akdogan, Tugba Sunguroglu, Elit Iscan, Doga Zeynep Doguslu, and Sensoy—and the film is particularly adept at capturing how at home they are within their bodies, when they are free to be so. By themselves—away from the censorious eyes of society—the girls lounge together like a litter of cats, playfully shove their feet in each other's faces, dance and climb and bounce and fight with natural, almost animalistic grace. Such simple, utterly authentic, non-objectified presentations of female physicality are rare in cinema, and are part of what makes Mustang's bittersweet tale feel so joyously revolutionary.

For this, it seems to me, is the real subject of the movie. If the early scene in the orchard represents a symbolic expulsion, it is neither a religious nor a moral one: rather, what we see throughout the film is an attempt to expel these girls from the earthly paradise of their own natural states, from autonomy over the bodies that are and should be their birthrights. With its particular setting, Mustang presents an extreme version of the forces that seek to control and commodify female bodies, but those forces are familiar to every culture, and the struggles of the girls will, I think, resonate with every woman. Mustang, in its celebration of feminine resilience and defiance, achieves a power—emotional, political, and artistic—that thrillingly transcends any specific milieu.

In a year in which America is grappling—again—with a lack of diversity in the Academy Award nominations, it is worth noting a couple of tangential facts about Mustang. First, that even though the film is a Turkish-language production, filmed in Turkey with Turkish stars and crew, it was the official Oscar submission of France, Deniz Gamze Erguven's adopted country. "In some way it’s a very radical and modern choice," Erguven said in an interview with Vogue. "It’s a way of saying: We are this diverse. It’s a way of embracing me as French with different origins, accepting the complexity of my culture and my identity. It’s a statement that says: We have absorbed many different cultures in France today." There are many ways in which the American film industry could stand to be more like France's, but this is definitely one of them.

Secondly, Mustang's nomination makes it the only narrative feature directed by a woman to be represented at this year's Oscars. (The nominated documentary feature What Happened, Miss Simone? was also directed by a woman, Liz Garbus.) And Mustang is a perfect argument for why this matters, for neither its female perspective nor its spirit of female empowerment should feel as rare or revolutionary as they do.

Finally, if there were any doubts I was going to watch the Oscars this year, Mustang has put them to rest. I will watch to root for this lovely, energetic film, which may be the best I saw all year. And I will watch for a glimpse of the director and her five stars, who will all be walking the Red Carpet, and who apparently embody the brilliantly defiant spirit of Mustang. "They are a riot," Erguven says of her young actresses. "They’ve internalized the values of the film as their own. They act like hardened criminals of an elementary school. Wherever they go, on the red carpet they climb on top of each other, they race. They are quite untameable."