In my last post, I noted the thematic significance of doors throughout "AKA Ladies Night," the first episode of Jessica Jones. In Episode Two, "AKA Crush Syndrome"—written by Micah Schraft and directed by S.J. Clarkson—the recurring motif is glass. (I won't, but I could obsessively fill this entire post by cataloging all the references to mirrors and windows, or showing screenshots of characters framed in one or the other.) Windows separate the guilty from the innocent, the safe from the unsafe, the sane from the insane. Mirrors demand introspection, and reflect identity. And all of these things—safety and sanity, innocence and identity—are as fragile as glass: they can crack, they can break, they can be shattered into a thousand pieces. "Crush Syndrome"—whether we mean the medical condition or the episode—is about people under pressure, and people, after all, are brittle.

Jessica herself, we know, is fractured: she was just holding on by the skin of her teeth even before Kilgrave's return, and after he came back she almost fled the country and left all of his innocent victims behind. At the end of the last episode, however, we saw her turn to face her fears, and now we see her growing stronger. I said last time that Jessica Jones is an engine that runs on characterization more than plot, and this episode is a good example of that theory in action. In terms of incident, not very much happens in "Crush Syndrome," but everything is important emotionally. Yes, Jessica does some good investigative work in this episode, and learns some important things. But the real forward momentum is not in the plot, but in Jessica herself. 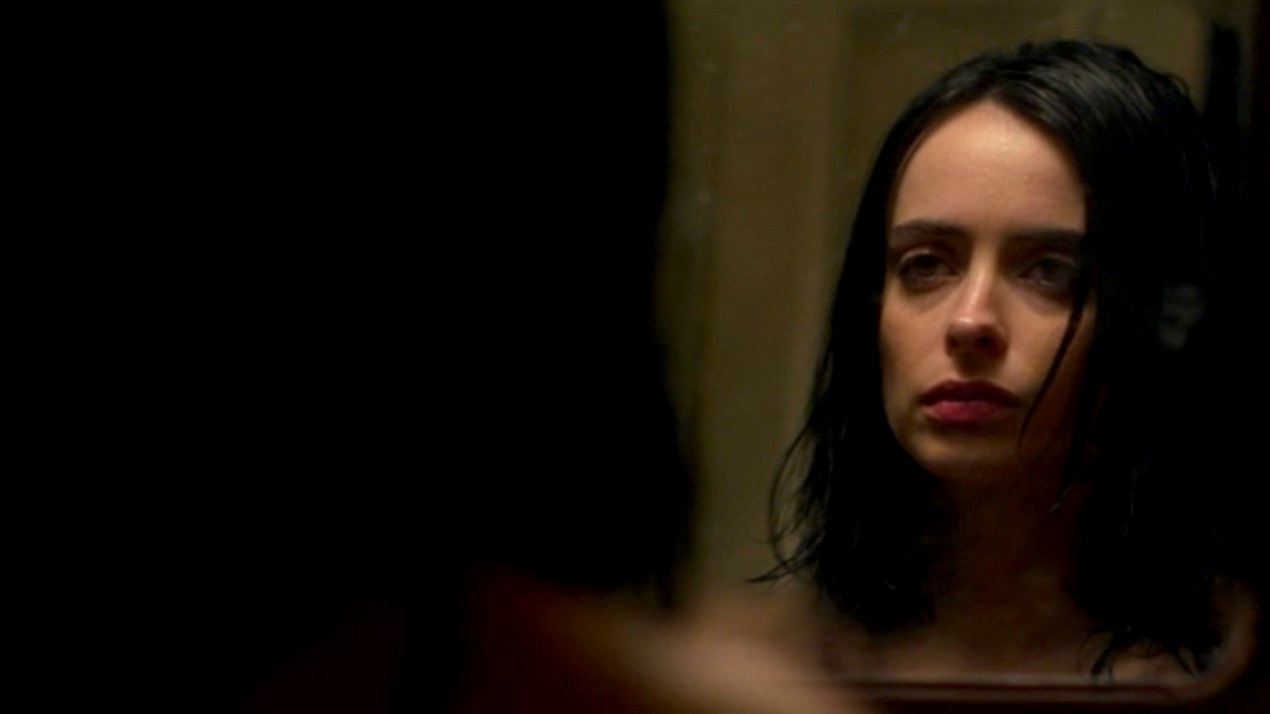 "Crush Syndrome" opens with Jessica's interrogation by Det. Oscar Clemons (Clarke Peters). Clemons wants to know how Jessica found Hope Shlottman, and why she didn't stop the young girl from murdering her parents. He wants to know why Jessica has so many photos of Luke. And he wants to know why Jessica had an overnight bag with her. All of these are the right questions, but Jessica isn't answering any of them, either for Clemons or for whoever is watching them from behind the two-way glass. She won't ask the police for help, because the police can't help: not against Kilgrave: Jessica is on her own.

"It's better, being alone," Jessica narrates later. "It's safer, with Kilgrave out there." But already we can mark a shift in Jessica's mental state: where her narration in the premiere seemed deliberately hard-edged and distancing, it is softer here, internal, more like thinking to herself than projecting a defensive attitude onto the world. She has lowered her defenses, ever so slightly, to herself, and so to us.

Alone is still the operative word here, however: Jessica has managed to alienate her new friend Luke—who blames her for drawing the cops into his shit—and she is keeping her best friend Trish at arm's length. Last week Jessica got desperate enough to ask Trish for help—or at least for money to escape—but now she gives the money back and refuses any further offers of assistance. "I'm life-threatening, Trish," Jessica says. "Steer clear of me. Please, I can't risk you."

Couched in this scene with Trish is Jessica's admission of the fear she lives with on a daily basis. "You think I'll be safe there?" she asks, when Trish invites her to move back into the apartment they used to share.

What works so well about this—and about this whole setup—is that it's a realistic specific fear, given the supernatural context: Kilgrave literally can make anyone her enemy. And it's also a more general expression of the post-traumatic stress her experience with Kilgrave gave her, which now has her jumping at every loud noise and punching windows on the subway. (Shattered glass, again.) Jessica's isolationism—her hostility towards her neighbors, her separation from her friends, her general fuck you attitude towards the world—is how she is surviving a world that suddenly feels so threatening. ("Don't have…feelings, okay?" she tells Trish.) 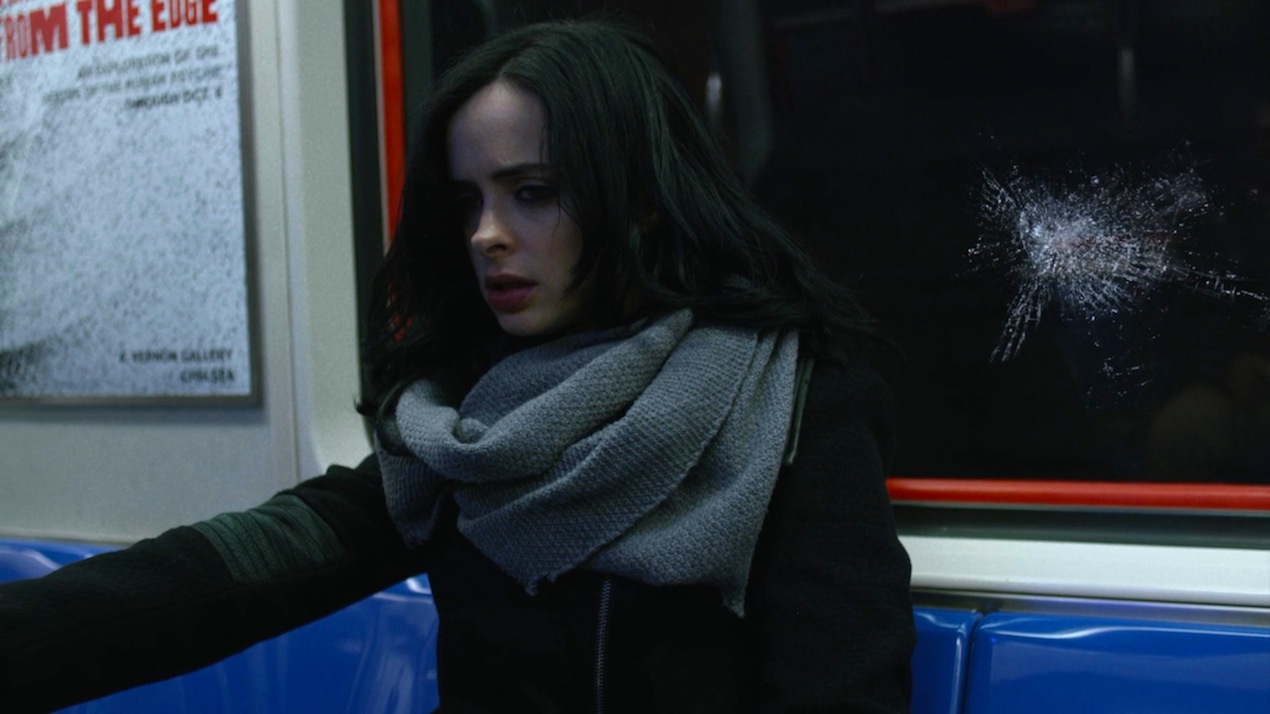 But—within this super-powered scenario—there's an emotional subtext that makes Jessica's struggle more universal, and reinforces why the series is so important in a genre where stories by women, and about women, are so rare. When I heard Jessica describe never feeling safe, always wondering what danger is lurking around every corner, I thought, I know lots of women who say they feel that way. I know too many women who have survived violence and sexual assault, and I don't know any women who don't live with the fear of it every day of their lives. (Jessica's speech reminded me of comedian Ever Mainard's routine about encountering a shady guy on a street at night and thinking, "Oh, here's my rape!", as though she'd been long expecting it.) I also once worked for a domestic violence organization, and Jessica's struggle to recover from her trauma, guilt, fear, and mistrust is recognizable, too, from the extraordinary women I knew there. I suspect we'll talk more about these issues more throughout the season—and as we learn more about what happened between Jessica and Kilgrave—but, even without details, there is an emotional truth to this story that gives it more weight and resonance than most "superhero" tales.

Jessica Jones is about women's survival, and women's strength. In her decision to help Hope—the name, as I suggested last week, is a little too on the nose—she is recognizing herself and fighting to save herself. "You should probably kill yourself," Hope tells Jessica. It's a shockingly brutal line, but it barely phases Jessica. (It's almost certainly not a new thought to her.) "Probably," Jessica agrees. "But I'm the only one who knows you're innocent." Hope's story is Jessica's story. If Hope is guilty, Jessica is guilty. If there's no chance for Hope, there's no hope for Jessica.

"I'm sorry, but this is happening. You're going to help people again, starting with me." — Jessica 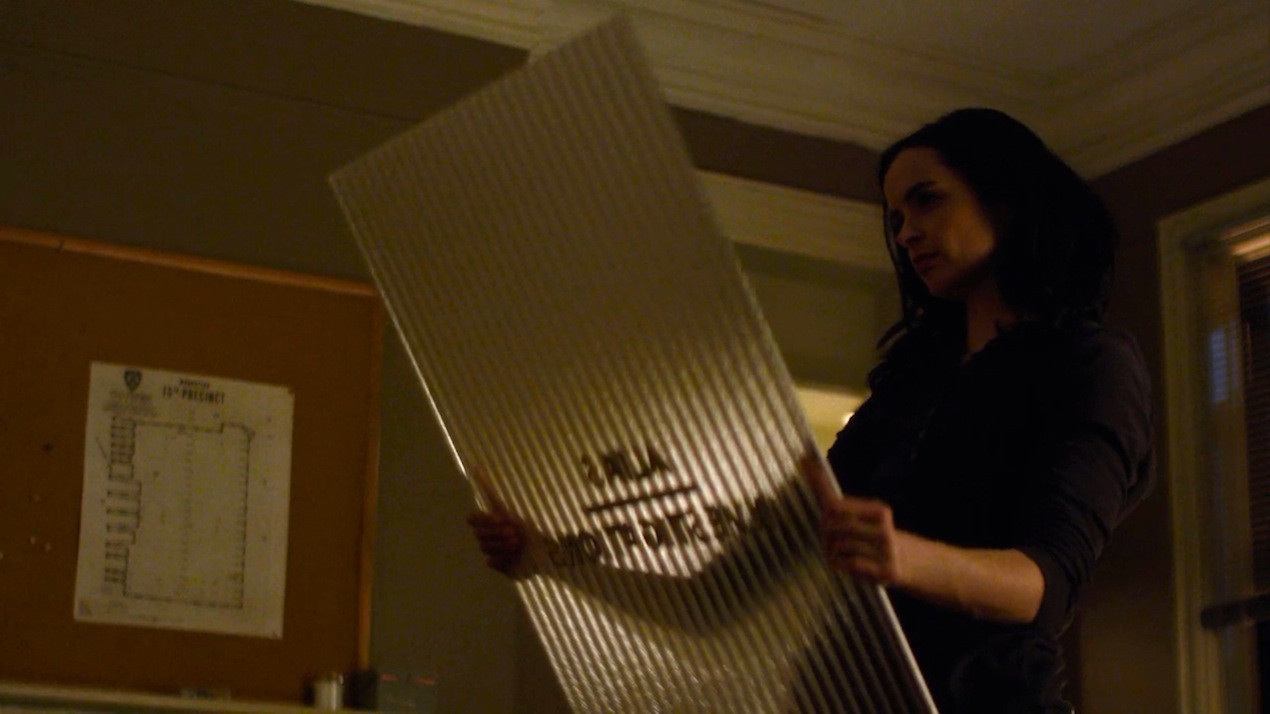 And she can't do it alone. Jessica makes a huge, practical leap forward in the fight against Kilgrave—learning from Dr. Kurata (Thom Sesma) that Kilgrave's powers are vulnerable to surgical anesthesia—but the real forward progress here is Jessica beginning to reestablish connections with other people. She enlists the help of Jeri Hogarth to prove Hope's innocence, and she begins to open herself back up to both caring about other people (Hope) and letting other people (Trish) care about her. "Steer clear of me," Jessica tells Trish, but at the end of that scene—right when Trish is leaving—Jessica offers a seeming non sequitur about the broken window in her office door. "It had a name on it," Jessica says. "The door. Alias Investigations. I had it made special." It is a tiny admission of pride, and a heartbreaking opening-up to her old friend: that name means something to Jessica. That window meant something. This was the identity that Jessica had just begun to rebuild, after what Kilgrave did to her. Now that identity lies shattered again.

But it can be fixed. People are brittle, identities are fragile, but what has been broken can be healed. At the end of the episode, Trish sends Jessica a new window, and we see Jessica be as happy about this—and as tender with it—as we have seen her be yet. Identity is fragile, but it can be rebuilt; she can move on from what has happened to her; she can even, perhaps, dare to feel again. The single most important moment in the episode may be when Jessica, after receiving this gift, calls Trish and asks her if she wants to go get a drink—a gesture of friendship and solidarity of which she would not have been capable before. Trish, alas, begs off, because she has her own work to do to find her strength—she is training in Krav-Maga—but the connection between her and Jessica has been reestablished. An episode that began with Jessica saying "It's better to be alone" ends with her expressing a different sentiment: "My greatest weakness? Occasionally, I give a damn."

But giving a damn is not a weakness: in fact, it may be the key to regaining her strength. And this episode begins constructing a community of women—a continuum of care between Jessica, Jeri, Trish, and Hope—that one suspects will be the key to restoring all their strength, and to crushing Kilgrave like the cockroach he is. 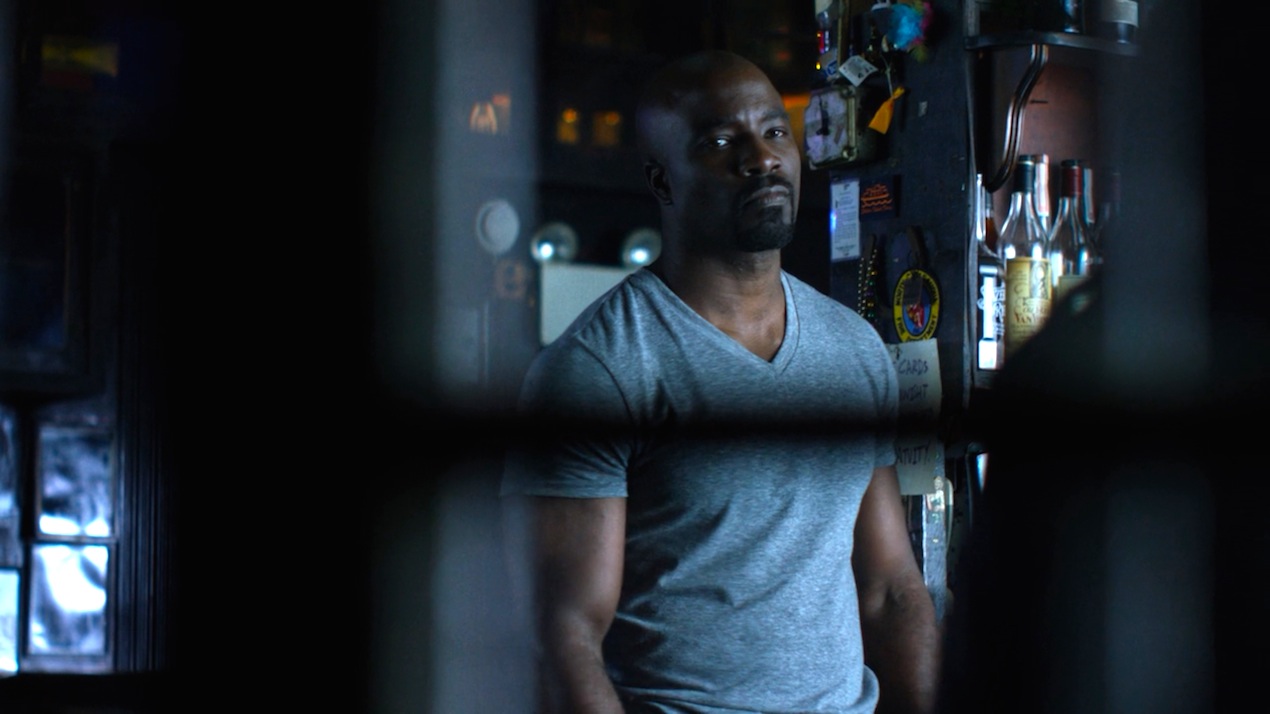 And, in this context, it is interesting that the one significant male character—apart from our villain–is Luke Cage. In an episode built around images of glass and fragility, we find out that Luke's gift is that he's not fragile. Glass, in fact, shatters against him, as an angry husband discovers when he tries to stab Luke in the neck with a broken bottle.

This resonates with Jessica's story in a couple of different ways. First, obviously, there is the appeal of someone like this for Jessica. We have seen so far that one of the driving impulses of Jessica's isolation is a fear of harm coming to the people she cares about, but—when she races to his defense, fearing that she has gotten someone else hurt through her actions—she discovers that Luke is someone who can't be harmed. She was attracted to Luke before—who can blame her?—but how much more attractive must he be now that she knows he's the one person in her life she doesn't have to protect?

But it's also something that separates them. Luke is a man, and—in a show about women's trauma, and women's strength—he is a thing apart. (The bruises all over Trish's body—gained in her quest for strength and self-protection—stand in stark contrast to the effortless invulnerability of Luke's skin. And the power saw used to fix Jessica's door—her identity—is something he can't even feel.) Luke does not—men do not—live with the same dangers as women, or have the same fears, or share the same vulnerabilities. In some ways that women can be broken, men are nearly unbreakable. (The metaphor is so perfect here that, if one didn't know better, one would think Melissa Rosenberg invented Luke Cage precisely for this purpose.)

It will be interesting to see how the show goes on to use Luke in this story. He may become a friend, and he may become a lover, but I wonder to what extent he can truly become an ally. Certainly, he cannot become a savior: if I'm certain of one thing, it's that Jessica Jones is about women's survival, and women's strength, and women's power. Jessica—with the help of other women—will have to save herself.