WHAT I DID ON MY SUMMER VACATION

I've been off since the end of June for a prolonged period of revelry, relaxation, and recuperation. And I won't lie: it's been a good few weeks.

(Among other things, The Unenthusiastic Critic became my Equally Unenthusiastic Wife, which was just lovely. The bride looked beautiful; I wore my Gallifreyan cufflinks; we worked her commitment to keep watching movies she didn't want to watch into the marriage vows; and a good time was had by all.)

But—before blissful happiness and contented sloth settle into permanent lifestyle choices—it is time for me to shake off the cobwebs, scrape off the barnacles, and get my lazy ass back in the game. So, to warm up, I thought I'd write a quick blog post bridging the gap.

First—let's get this out of the way—here's what I didn't do on my summer vacation: I didn't write those last couple of reviews of Orphan Black, and I didn't catch up with my reviews of Hannibal. And, to be honest, it's looking extremely unlikely at this point that I'll do either of those things. I doubt anyone has been waiting breathlessly for them, but I do apologize. So many weeks later, it's feeling to me like the window has closed, and I'm ready to clean the slate and move on to new things. (Orphan Black I'll return to next year, and I'll no doubt share some summary thoughts about this season then. With Hannibal, regrettably, it's looking like there probably won't be a next season.)

But, while I've been enjoying the break from writing, I haven't been lying entirely fallow, TV-wise. Here's a quick summation of what I've been watching in my down-time, and what I've decided to do next.

What I've Been Watching 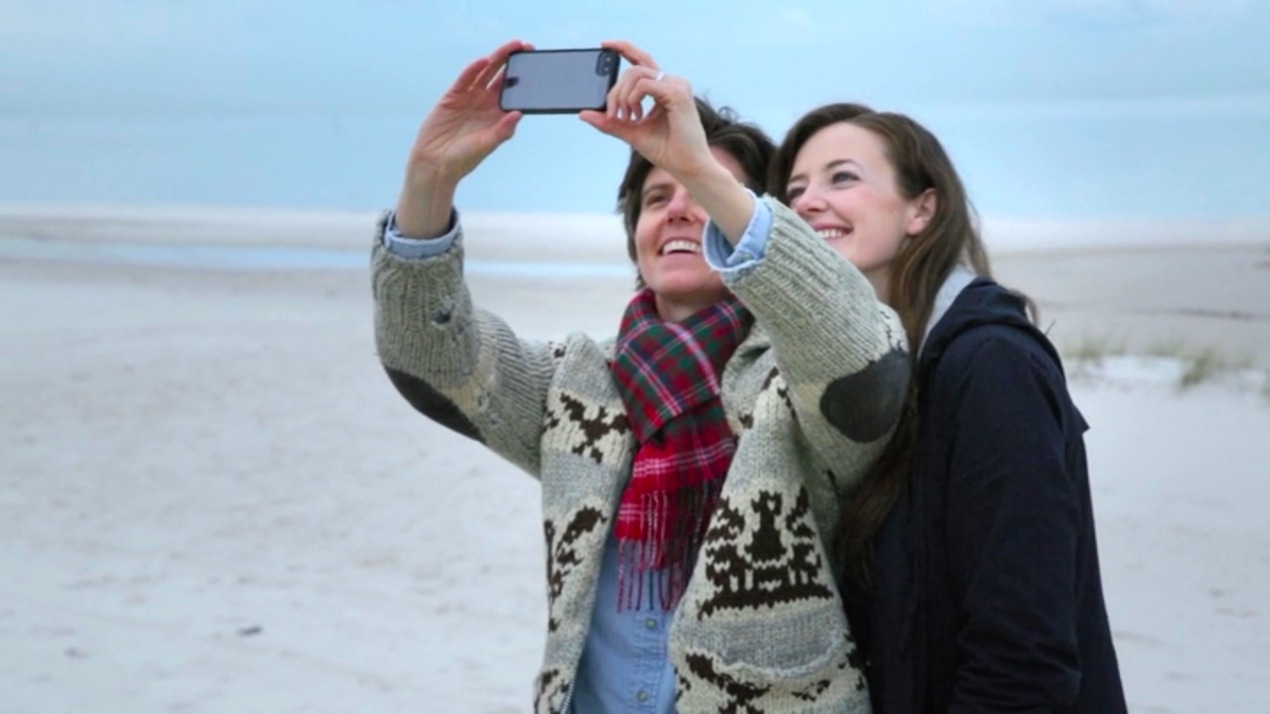 One of the best things I watched during my vacation was Tig, Kristina Goolsby and Ashley York's Netflix documentary about deadpan comedian Tig Notaro. Notaro's life exploded—in nearly every sense—in 2012: over the course of just a few months, she battled a potentially fatal bacterial infection, went through a break-up, lost her mother to a freak accident, and learned she had breast cancer. The day after she got her cancer diagnosis, she announced the news at the L.A. comedy club Largo in a hilarious, raw, and now deservedly legendary stand-up set that catapulted her into worldwide fame during the worst period of her life. (Seriously, if you haven't listened to her set—available as the album Live [the title is a verb, not an adjective]—you should do that.) Tig chronicles the aftermath of those extraordinary events, as Notaro picks up the pieces of her personal and professional life. As funny, humble, and low-key as its subject, Tig earns the expected plaudits like "inspirational" and "heartwarming" by never once reaching for them, becoming all the more moving and edifying for refusing to be sentimental or maudlin. 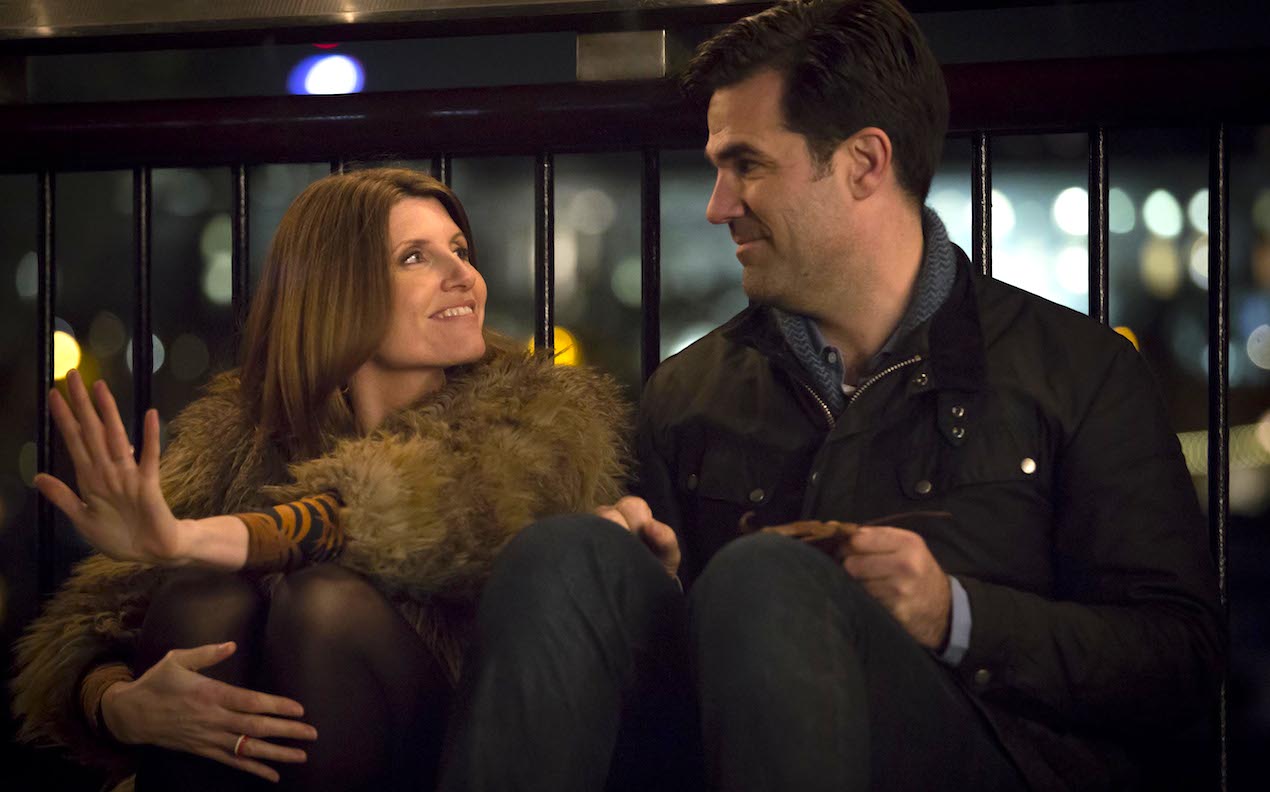 I also highly recommend Catastrophe, a 2015 half-hour comedy from Britain's Channel Four that's now streaming on Amazon Prime. The "catastrophe" in question is the unexpected pregnancy that results from a casual, no-strings-attached affair Irish schoolteacher Sharon (Sharon Horgan) has with traveling American businessman Rob (Rob Delaney). The basic formula of two complete strangers suddenly plunged into an unexpected relationship is familiar enough, but co-creators Horgan and Delaney make Catastrophe feel miraculously fresh by avoiding all the formulaic traps and tropes its premise would seem to suggest. A lesser comedy, for example, would milk this situation for easy culture- and gender-wars material, but Catastrophe's charms come largely from how much these two virtual strangers like each other: though both terrified, Rob and Sharon approach their situation together with openness, touching generosity, and a shared sense of humor that is crude, acerbic, and remarkably frank. (As a result, when conflict does come, it is not the bullshit misunderstandings of endless rom-coms, but character-driven, earned, and achingly real.) Honest, sexy, and refreshingly unsentimental, Catastrophe's short, six-episode first season is a gem, and I'm already impatient for Season Two (coming this fall). 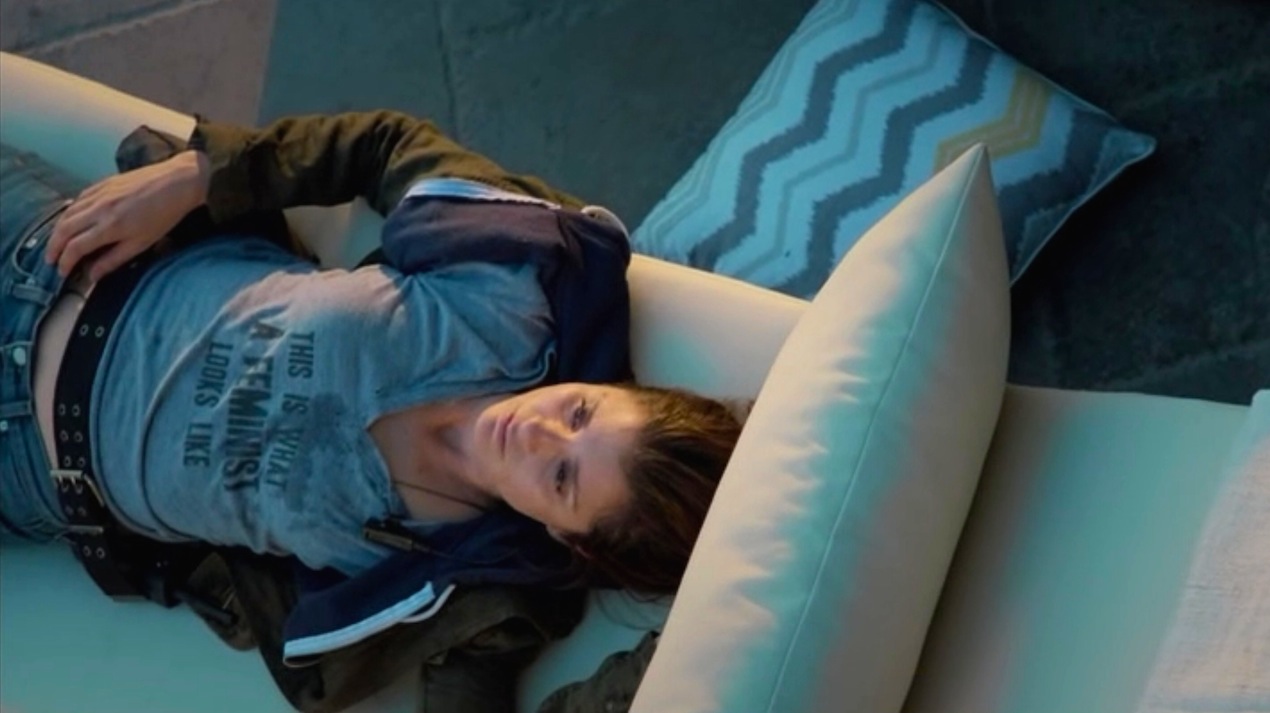 My recommendation of Lifetime's new series UnREAL is slightly more qualified, but this was definitely the most addictive (and pleasantly surprising) show I binged during my break. I confess, when I saw the promos for UnREAL, I had dismissed it out of prejudice: Lifetime is not exactly known as a powerhouse of quality original programming, and the show looked to be a satire of the all-too-easy target of reality TV. But Marti Noxon and Sarah Gertrude Shapiro's series is not the broad and lazy pastiche I'd expected: instead, it's a smart and compelling drama set amidst the behind-the-scenes manipulations of a Bachelor-style reality show. UnREAL definitely runs into some tonal problems as it attempts to balance its comedic and dramatic elements: some satiric scenes land as cartoonish, and an absurd mid-season plot development threatens to shake the entire show off its rails. But Noxon and co-producer Shapiro—herself a former producer of The Bachelor—also frequently find authenticity and genuine emotion in smaller, quieter moments, and star Shiri Appleby is absolutely amazing as a conflicted associate producer who happens to be really good at turning desperate human beings into cheap entertainment. UnREAL is sensationalistic enough to make it feel at times like a guilty pleasure, but there's more than enough genuine wit and pathos here to make me recommend it with a clear conscience. 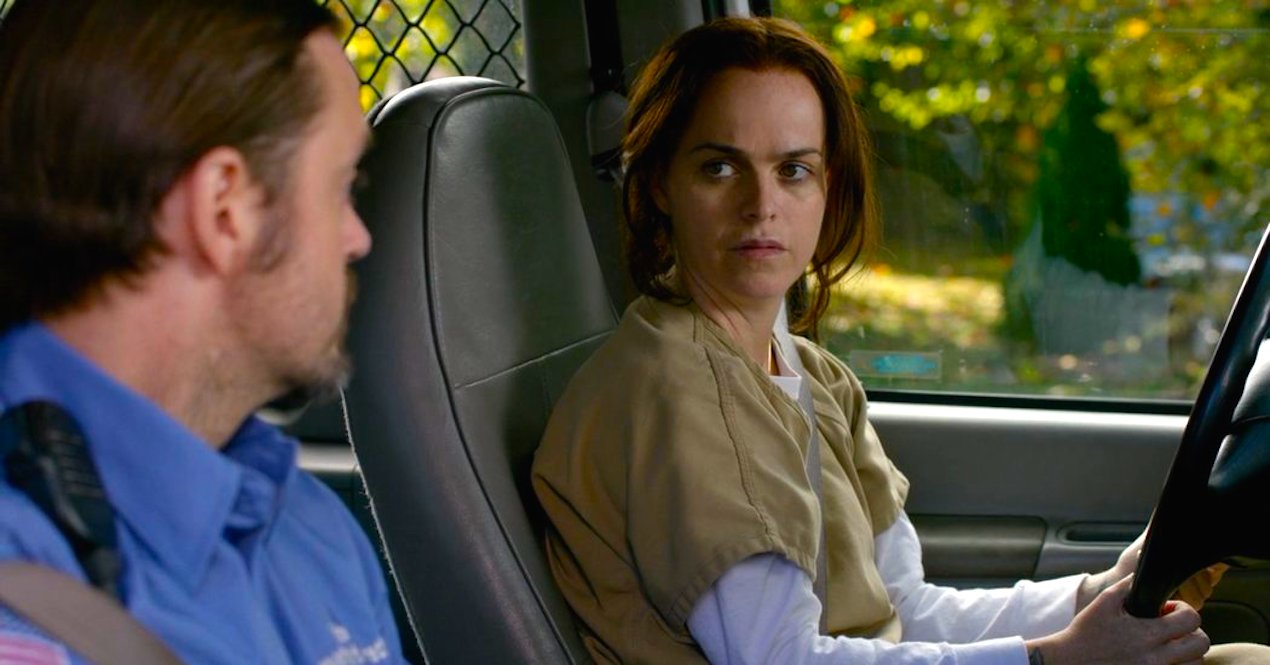 On the other hand, I think I'm ready to admit that I'm just never going to love Orange is the New Black. I've tried, honestly. I kind of hated Season One, but I thought last year's Season Two made considerable strides in the right direction, by focusing less on the odiously privileged Piper (Taylor Schilling), and exploring more interesting issues of class, race, and sexuality through the stories of the other women. But Season Three just felt slight to me, as though the show had run out of the few things it had to say about anyone or anything. The fabulous Taryn Manning's "Pennsatucky" got a lot of welcome (and frequently poignant) screen-time this season, but hers was basically the only character I cared about in a sea of storylines that felt shallow and ineffectual. Awards voters have never quite decided if Orange is the New Black is a comedy or a drama, and I think this confusion is built into the show's DNA: creator Jenji Kohan wants to be able to treat her characters as outrageous stereotypes one moment, and then ask us to care about them as real people the next. (Kohan's show Weeds suffered—and ultimately collapsed—from a similar tonal indecision.) Isolated moments in either genre may work, but the comedy and drama never seem to be coming from the same place, and I find this discordance just undermines any genuine investment I try to make in the series as a whole. 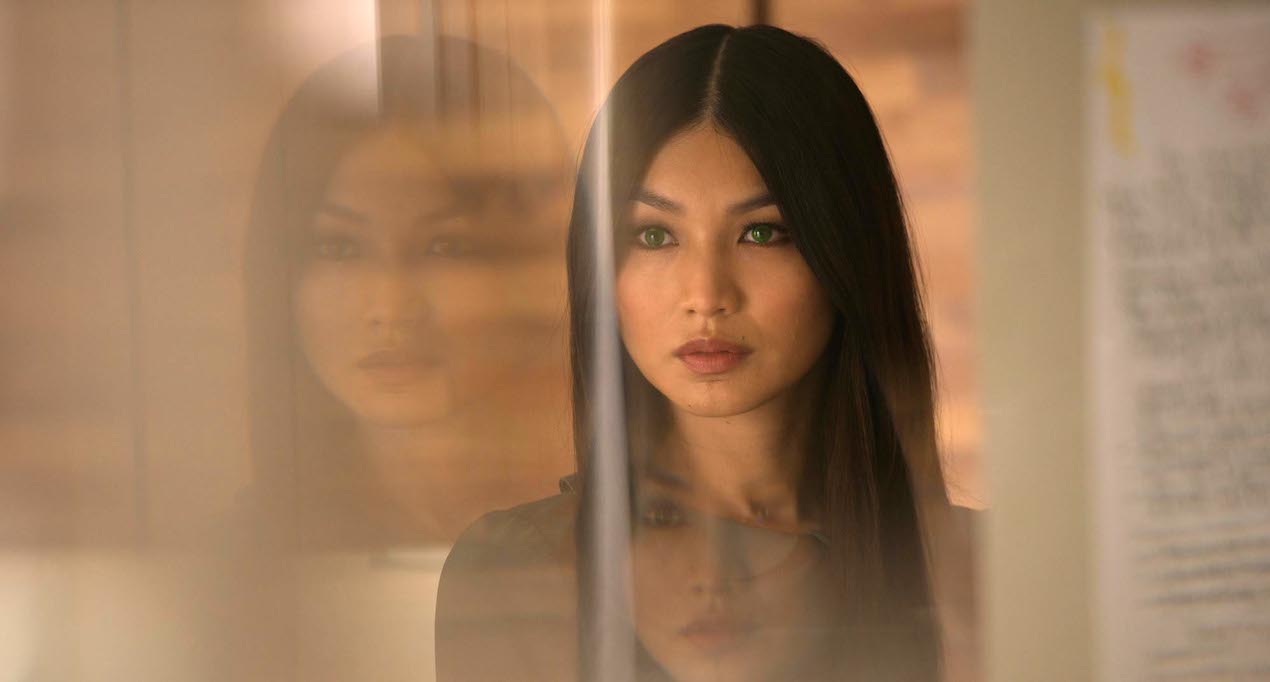 Finally, I've only watched a few episodes of AMC's Humans—another import from Britain's Channel 4—but I'm enjoying what I've seen so far. The story of a near-future in which realistic synthetic humans are a standard-issue commodity, Humans is playing out like an extended episode of Black Mirror—and that's a very good thing. The cast is fantastic, particularly Gemma Chan as self-aware synthetic domestic servant Anita, and Katherine Parkinson as the woman who is resentful and suspicious of her family's newfound reliance on Anita. With William Hurt as the elderly co-inventor of the technology, and Colin Morgan as the leader of an underground railroad for liberated "synths," it's hard to tell where all of this is going yet—but that's one of the things I like about it. Humans is doing a slow-burn, exploring issues of identity and consciousness with intelligence, patience, and nuance. Only four episodes have aired so far: plenty of time to get on board.

What I'm Doing Next

I'm still deciding what shows I'll be covering with full reviews as the summer descends into the new fall season. In the meantime, I've decided to use the current window in my schedule to rectify a serious gap in my TV education by binge-watching (and writing about) the seminal 1960s cult series The Prisoner. (No, I've never watched The Prisoner. Yes, I'm kind of embarrassed about that.) Look for the first post on the pilot episode to appear shortly, followed by reviews of two-or-three episodes at a time over the next month. (For anyone wanting to watch along with me, the show is available for streaming rental on Amazon, and I'll post my viewing schedule in the first review.)

After that, the waters get murkier. David Simon (The Wire) has a new, six-episode mini-series called Show Me a Hero that premieres on HBO August 16, and I'm thinking about covering that. (The Wire is, itself, the next big series I want to write about when I have a larger window in which to do so, but that will probably have to wait until January at the earliest.)

The Walking Dead spin-off, Fear the Walking Dead, starts August 23: my coverage of the original show has been spotty (and not always enthusiastic), but if the spin-off is doing something sufficiently different I might be inclined to write about it.

The next thing I know I'll cover—as always—is Doctor Who, which returns September 19. Otherwise, I guess we'll see what the new fall season has to offer. (I'm also open to suggestions and peer-pressure, so feel free to make any requests in the comments. What are you excited about watching?)