I've been dragging my feet a little on my review of this week's Mad Men, hoping my opinion of it might—if not actually change—at least be tempered by time. But I can't put it off any longer; all I can do is try to keep it short.

For the record—as if it needs saying—I genuinely believe that Mad Men is one of the all-time greats, a masterpiece that will only improve and expand with age. This is not disposable entertainment: this is one of the first genuinely long-form television texts, and the real exegesis of this story will only begin after the show itself comes to an end this May. Judging any single chapter of a work this rich and sophisticated is always going to be a flawed and somewhat futile endeavor.

Nonetheless, even a great TV series has to have a worst episode, and—at least off the top of my head—I can't think of a better contender for Mad Men's nadir than "New Business."

Yes, Mad Men is great. However, Mad Men is not perfect, and its flaws have historically shown most clearly in two areas: in its inability to deal with race, and with its treatment of female characters. The first is mostly a sin of omission, which makes it harder to talk about. (Perhaps we'll find—or take—an opportunity to discuss this subject before the series ends.) The second, however, is a recurring problem: the show walks a very fine line between observing the inherent misogyny in this male-dominated world and actually being misogynist. Most of the time, I'd argue it stays on the right side of that line, but there have been many times over the years when the show has lost its precarious balance and planted a clumsy foot on the wrong side of the equation. (Betty is not the only major character who has suffered from these transgressions, but she's the most frequent victim. However, since she barely appears this week, let's save our discussion of Betty, too, for another time.)

"New Business," however—written by Tom Smuts and Matthew Weiner—seems to live on the wrong side of the gender line. First, there is the usual overt, male-character-driven misogyny: Harry's reprehensible attempt to extort Megan into bed; his subsequent effort to preempt retribution by disparaging and discrediting her to Don; and the various expressions of disdain from Roger, Don, and Pete as they commiserate about their crazy, punishing ex-wives. (“So she never said you squandered her youth and beauty, used up her childbearing years, thwarted her career? What career? She’s a consumer.”)

This is all fair game, I suppose: representative of the characters as they've been established and of the accepted attitudes of the time. But even here these issues seem more clumsily handled than they usually are. Like last week's scene in which Joan and Peggy walked into a virtual buzzsaw of blatant sexism at McCann-Erickson, there is very little subtlety or new insight in any of these scenes. Remindful of the sort of heavy-handed era-markers the show sometimes evoked back in Season One, these scenes and dialogue now seem beneath Mad Men, like something the show should have long ago outgrown.

What's more troubling is how "New Business" seems to not merely be observing this fear and hatred of women, but agreeing with it. The women are awful in this episode. We get the crass sexual manipulations of Pima (Mimi Rogers), a crudely drawn bi-sexual fantasy of an independent professional woman. We get the gross incompetence of all the secretaries at Sterling Cooper & Partners. (Look, isn't it funny? It takes two silly women to dial a phone!) We get all the women of the Calvet family—two of whom, at least, had previously seemed relatively strong characters—suddenly transformed into cartoonishly vengeful, bitter harpies. And of course we get Diana, an emotional black hole crippled by motherhood and incapable of love. (More on her below.) 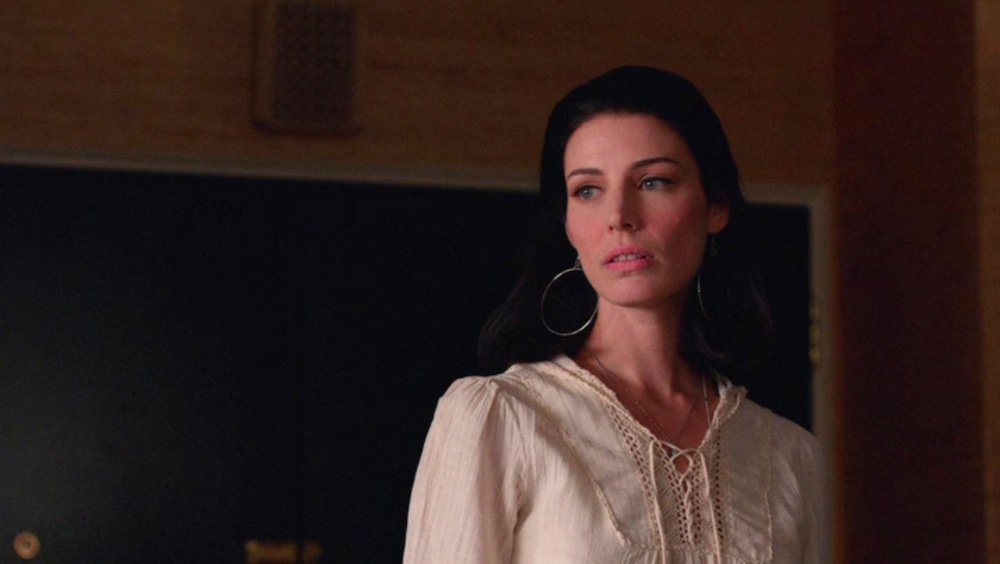 I need to talk about Megan Calvet for a minute, because I'm sorely concerned that this was the swan song for a character who deserved much, much better. When she first came into the story—as yet another in a long line of Don's sexually available secretaries—I think most of us (like Don himself) underestimated Megan. (His proposal to her in the Season Four finale seemed to come out of nowhere, and was met with a collective Huh? by a large segment of the audience.)

However, it soon became clear that Megan was a force to be reckoned with. Remember how she distinguished herself from the other secretaries who fell under Don's spell, and claimed her own sexual agency? ("Let's be clear," she said, before they slept together the first time. "I'm not going to run out of here crying tomorrow. I just want you right now.") Remember how, throughout much of Season Five—beginning with her explosive performance in "A Little Kiss"—it seemed she was the dominant force in their relationship? Remember how she became a rising star at Sterling Cooper—impressing everyone with her talent and work ethic—and then walked away from all of it when she recognized it wasn't what she wanted? Remember how she built a life in California, and increasingly resented Don's intrusion on it? Remember how it was she, not he, who finally admitted—quite amicably—that their marriage was over? "You don't owe me anything," she said at the end of that conversation, just two episodes (and a long hiatus) ago.

I'm not saying Megan's was ever the most consistent arc—there were definitely peaks and valleys along the way—but I don't at all recognize the version of the character who appears in "New Business." Where did this angry, vindictive, money-grasping woman come from? It's not that she doesn't have plenty of reasons to be angry with Don: she does. But there's no explanation for the sudden venom here, and it's minimizing her character to have her tell Don "you ruined my life" when autonomy and agency have always been hallmarks of her personality. It's one thing for character development to happen off-screen, but for a character to devolve off-screen—into a lesser, more clichéd, victimized version of herself—is just a disservice.

Especially after the way the show went out of its way last episode to canonize Rachel Menken as "the one that got away," turning the formerly formidable Megan (in what may be her final appearance) into someone Don seems well rid of is a crime. 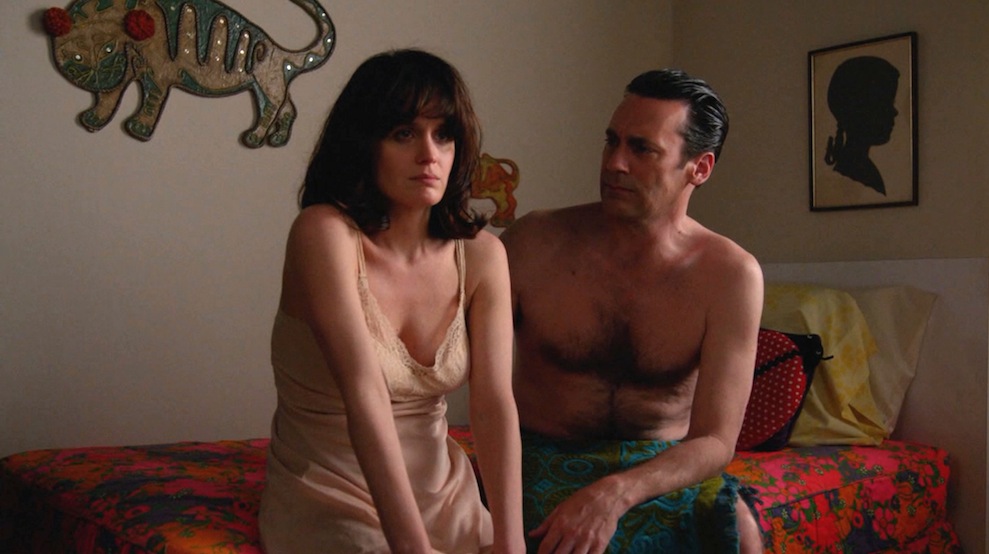 And then there's Diana. I'm willing to give Matthew Weiner the benefit of the doubt on where he's heading with all of this, but, I have to confess, I don't understand this character at all so far.  If we had to go through yet another Don Draper relationship-issues story—and I'm not sure we did—I sort of wish we'd revisited one of the old ones. (I would have welcomed the real Rachel back, or Midge, or Dr. Faye, or the perky schoolteacher whose name I don't remember because she disappeared and was never heard from again.) Introducing a major new character at this stage of the series is a risky move, and I don't think it's working. Elizabeth Reaser is a very good actress, but I feel like we can see her struggling to make sense of this character, who is such a Frankenstein assemblage of projected Don-Draper issues—prostitution, mothers, guilt, class, self-loathing, and running from your past—that there's little hope of an actual person emerging.

That's not to say that this storyline couldn't work—and might still—but so far it's leaving me depressingly cold. Diana's sadness might be an interesting foundation for a character, but we haven't seen enough of her besides that to even justify why Don is interested in her, let alone to justify why we should be. She's not a character yet, just a collection of mismatched issues.

As my regular readers know, I hate writing reviews like this. I hate writing reviews, period: I tend to analyze more than quantify, and the only time I find myself commenting on whether something was "good" or "bad" is when it was particularly bad. Though I recognize that it may seem worse because there are so few left, this episode did indeed strike me as particularly bad: simplistic, dismissive of women, and just tonally off throughout. (In addition to the points I've already covered, I thought the dialogue was unusually groan-worthy—“It’s three in the morning. You know why you’re here. Do you want a drink or not?"—and I found the weird comic tone in both the Pima story and Marie's Misadventures in Moving misplaced, nuance-free, and mean-spirited.)

Overall, this episode felt at times more like a Mad Men parody than Mad Men itself. So, as promised, we'll cut it short this week: let's just call this one a rare misfire, and let's pray that we get through the remaining five episodes without too many more.