First Look/Last Look is a series in which I check out the pilot episodes of new TV shows. While I always hope this experiment will yield at least one show that I will want to add to my regular viewing—if not reviewing—schedule, I’m not holding my breath. Call me pessimistic, but, in most cases, I expect my first look to also be my last.

I've got an idea for a show to pitch to you. (Stop me if any of this sounds familiar.)

It takes place in a struggling hospital. The main character is a brilliant but temperamental doctor, who alienates everyone around him, and frequently clashes with the hospital administrators. But they put up with him, see, because he's just such a genius, and because his wildly unorthodox methods save the patients who would otherwise die. Oh, and did I mention, the doctor is also secretly a drug addict?

Actually, surprisingly, it might be. If you'd asked me last week, I'd have said it would be next to impossible to take those hoary television tropes and make them seem fresh, but Cinemax might just have managed it with The Knick. Though clichés definitely abound, there are a few major factors that could set The Knick apart from the sorts of medical-drama clones my description above evokes.

First, this one takes place at New York City's Knickerbocker Hospital in the year 1900, when "modern medicine" as we know it was in its infancy. Not since Doc Cochran tried to cure Al Swearengen's kidney stones has a show promised such fascinatingly squirm-inducing medical sequences. The resulting gross-out factor may be the most compelling reason to watch The Knick—especially since we can mask our wincing enjoyment as historical curiosity. The pilot episode, "Method and Madness," opens with a bravura sequence in which doctors attempt an exciting new procedure on a pregnant woman: a Caesarean section. The camera captures every aspect of the surgery in clinical—which is to say, gory—detail, and we watch as layers of flesh are carved and folded back, clumps of tissue are dumped unceremoniously in enamel bowls, and blood is suctioned messily with a hand-operated pump. (Needless to say, the squeamish viewer may want to find other entertainment on Friday nights.) Finally, as a gallery of silent and be-suited gentleman look on in judgement, the frantic operation ends with both the mother and the child dead. Later, we learn this was the 12th failed attempt to perfect this particular surgery, with no survivors.

And the medicine isn't the only thing that seems new by virtue of being old: so too does the city itself. The turn-of-the-century is a neglected period for period dramas, falling inconveniently between the more obviously exciting eras of the Old West (Deadwood) and the First World War (Downton Abbey). The few times we've seen the nineteen-aughts dramatized on-screen, it has usually been in adaptations of Henry James, or Edith Wharton, or other relatively genteel fare. The Knick shows us a very different fin de siècle New York, one of unimaginable poverty, appalling sanitation, and widespread corruption. Competing ambulance companies are willing to take bats to each other over who gets a fare, and a timely bribe from a slumlord can always convince the local health inspector to overlook the dangerously septic housing conditions thousands of families—mostly poor immigrants—endure. Approaching the past with this modern, cynical eye gives The Knick an interesting perspective: it's probably too much to hope that the show really explores the systems of this city like a turn-of-the-century version of The Wire, but the period details are both convincing and fascinating. 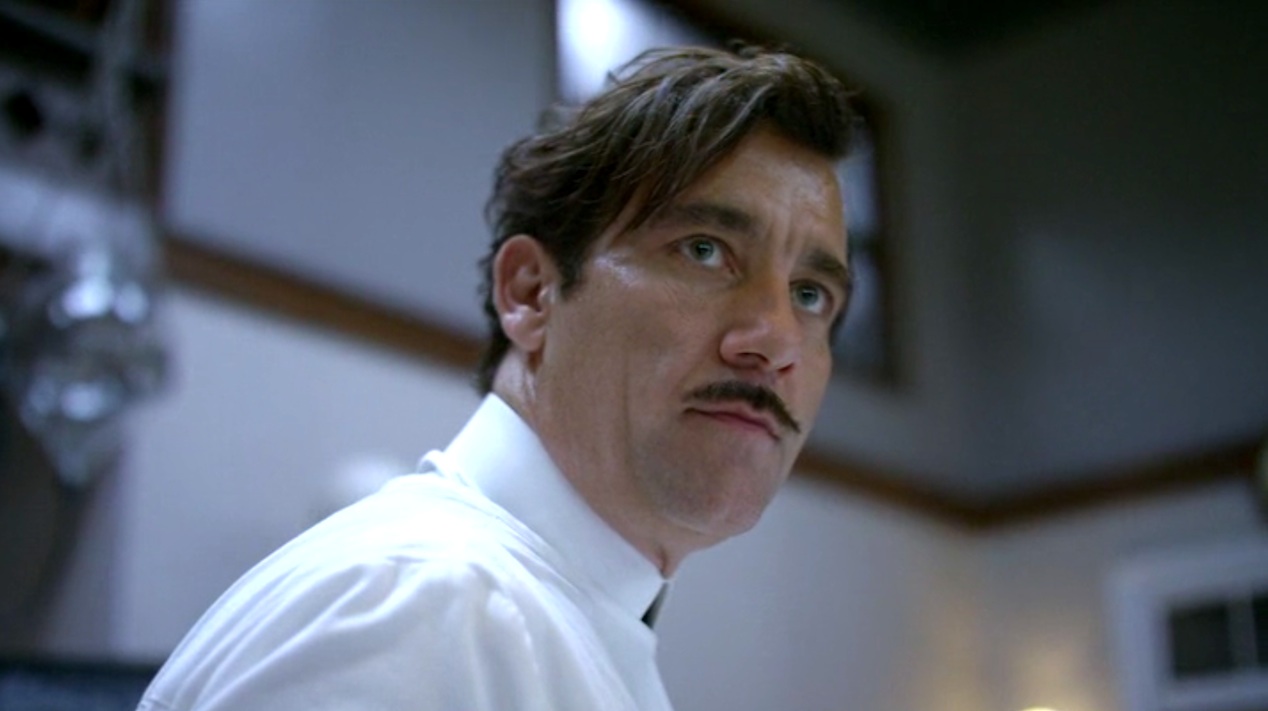 So the setting is the first thing The Knick has in its favor; the second is its star, the eminently watchable Clive Owen. Owen plays Dr. John Thackery, Knickerbocker Hospital's newly anointed head of surgery. The character is—as mentioned above—a familiar one: the brilliant but tormented physician who can heal anyone but himself. Thackery articulates his fatalistic, self-aggrandizing philosophy—and possibly the theme of the show—in a eulogy for a medical colleague. "Your god always wins," he says. "It's the longest unbeaten winning streak in the history of the world. . .But we humans can get in a few good licks in battle before we surrender." The megalomaniacal doctor who views his work as a war on God is not new—there was actually an episode of House M.D. called "House vs. God"—and on paper Thackery is a stubborn, insufferable ass in the recognizable mold of any number of self-destructive antiheroes: he's addicted to cocaine, he frequents Chinatown prostitutes, he pisses everyone off. But Owen is a good enough actor to underplay the character's more colorfully clichéd qualities. Instead of going out of his way to show us how Thackery doesn't give a shit what anyone thinks of him, Owen just plays him that way, with a relaxed world-weariness and humor that makes him the calm center of the chaos he creates. If the material rises to meet it, this could turn out to be a great performance.

Of the other, supporting characters, it's too early to say: the world of The Knick is full of potentially interesting characters—including a tough nun (Cara Seymour), an odious ambulance driver (Chris Sullivan), a novice nurse (Eve Hewson), and the money-grubbing health inspector (David Fierro), but the pilot doesn't give any of them a lot to do. The main conflict in this first episode is between Thackery and Miss Robertson (Juliet Rylance), the daughter of the hospital's wealthy benefactor and something of a liberal crusader: it is Robertson who demands that Thackery hire Dr. Algernon Edwards (André Holland), a Harvard-traied surgeon who is brilliant, extremely qualified, and black. (Thackery is unapologetically racist, and doesn't think the way out of the hospital's financial problems is to hire a surgeon no white patient will want as his doctor, but the Robertsons control the purse strings.) Race-relations in this era is another potentially fruitful avenue for The Knick to explore, and Holland is an interesting actor, but it remains to be seen how genuinely—or thoughtfully—the show is interested in exploring this subject. (Certainly there are signs the approach to this theme may not be terribly sophisticated: Dr. Edwards conveniently enters the hospital past one of the only other African-Americans we glimpse at the Knickerbocker, a man shoveling coal in the basement. And the hospital's reward from the Robertsons for hiring Dr. Edwards is the gift of electricity: the first episode ends with a "let there be light" scene of turning on the electric lamps: it's a bit of a heavy-handed note to introduce the theme of change at the dawn of the 20th century.)

All of which brings us to my concerns about The Knick: it may be that the cast and crew are falsely elevating material that isn't quite up to snuff. The biggest strength of The Knick is its director (and one of its executive producers), Steven Soderbergh. Soderbergh is a fantastically talented craftsman, and his composition and camera work gives The Knick an energy and authenticity that makes it compelling television. (At least for this pilot episode, Soderbergh also served—under pseudonyms—as the cinematographer and editor.) Soderbergh—after having "retired" from filmmaking in a much-ballyhooed announcement last year— is directing all 10 episodes of The Knick's first season, which pretty much guarantees the show will be worth watching, at least from a technical standpoint. It's Soderbergh's eye—and an wonderfully anachronistic electric score from Cliff Martinez (Drive)—that makes life 114 years ago seem both relevant and riveting.

But one of my frequent complaints about Soderbergh's films—here, and here, for example—is that he often picked projects that simply weren't worthy of his time, or of the talents of the A-list casts he assembled. I'm reserving judgement until I see another episode, but I'm seriously worried that The Knick may be another one of those projects: the writing here, so far, is just not on the same level as the rest of the production. The dialogue is a bit stiff and speechified; the themes are telegraphed without subtlety; the characters are more than a little familiar. (Nothing on the resumes of writers Jack Amiel and Michael Begler—who previously collaborated on forgettable films like Big Miracle, Raising Helen, and the 2006 Shaggy Dog remake—gives me hope things will improve considerably.)

I'll admit, few of these complaints bothered me while watching the first episode of The Knick: Soderbergh's direction, and Owen's performance, are enough to make anything look good. But unless the scripts manage to rise to the level of the production, The Knick may turn out to be a massive missed-opportunity.

When Is It On?

Fridays at 10/9c on Cinemax. The pilot episode aired August 8, and is currently available to watch free on YouTube and through on-demand services.

Will I Keep Watching?

Yes, for at least a couple of more episodes: there's enough going on here for me to hope the writing catches up.

Will I Keep Reviewing It?

Probably not. If the second episode blows me away, I may reconsider.