To say that Oculus is a better-than-average scary movie is to acknowledge the tragically lowered expectations of the genre itself. Oculus is reasonably well acted, it manages some creepy moments, and writer/director Mike Flanagan generates some real energy by finding fairly original things to do with the film's structure. Shouldn't that be enough to recommend it? What more could we possibly ask of a haunted house movie?

Well, of course, there is a lot more we might ask, and that something more is the difference between an enjoyable-but-disposable experience and an actual movie. Oculus shows some promise, but ultimately it's satisfied with being simply competent. You can almost feel the creators saying, "It's just a scary movie."

One of my perennial complaints about these sorts of films—and we'll come to others in due course—is that, too often, the people in scary movies seem to know they're in scary movies. But here, at least, the protagonists have good reason: they've been through this before. Twelve years before the film opens, the Russell Family—parents Alan (Rory Cochrane) and Marie (Katee Sackoff), and children Kaylie (Annalise Basso) and Tim (Garrett Ryan)—prove once again that the most dangerous thing a family can do in a horror movie is move into a new house—especially an isolated old house in the country.

They also do the second most dangerous thing you can do in this sort of movie: they go shopping for antiques. It is a four-hundred-year-old mirror, called the Lasser Glass, that sets off a chain of mysterious events, disappearing pets, and demonic possessions that leaves both parents dead, the daughter in foster care, and the son in an institution. 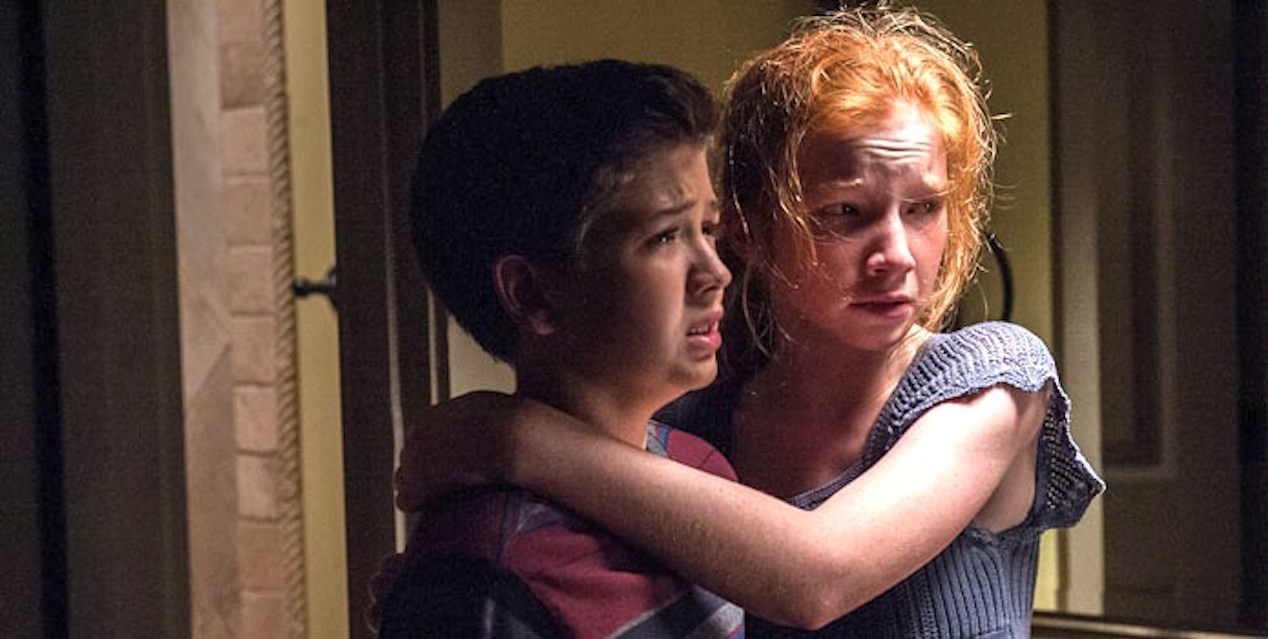 Now, in the present day, Tim (Brenton Thwaites) is 21, and being released from his custodial care. He is met by his sister Kaylie (Karen Gillan), who has a surprise for him: she's tracked down the Lasser Glass, and she has an elaborate plan to expose its supernatural nature, exonerate their parents' memory, and destroy the mirror's evil once and for all. There's just one problem: Tim, after years of therapy, no longer remembers things quite the same way.

This conflict between the two siblings lends the first half of Oculus some freshness and genuine interest. Kaylie is like a red-headed Ahab in her single-minded obsession with the mirror; she's thought about nothing else for years, and she's planned her revenge down to comically precise detail. But Tim has spent these twelve years with doctors who have convinced him his memories were delusions, and that everything that happened to the family had mundane, if tragic, explanations. Watching Kaylie and Tim debate whether their father was possessed by demons or just plain crazy feels like watching a potentially fascinating play, and there was perhaps a more interesting movie to be made by keeping the answers ambiguous and just exploring the post-traumatic psychology of horror movie survivors.

But alas, in this case, the deck is thoroughly stacked: Tim's rational explanations may sound more plausible, but we bought a ticket for a ghost story, and so we know that Kaylie is right. Before long, the mirror has revealed its spooky true nature in no uncertain terms. Unfortunately, the ways its (frustratingly vague and conveniently omnipotent) supernatural nature manifests itself are—while admittedly creepy—much less engaging than the psychological battle of wills we were previously watching.

The scares themselves are pretty much by-the-book, but Flanagan's clever approach is the star in the second half of the film. As the adult Kaylie and Tim confront the mirror, they are also confronting the events of their childhood, and so Flanagan—who serves as writer, director, and editor—splices the two sequences of events into one, often overlapping so that the adult and child participants seem to be observing each others' fight for survival. It's a fresh, energizing approach that succeeds in lending some new life to these very old ideas, and in making Oculus much more interesting than it would otherwise be. (Oculus is Flanagan's first high-profile film—after some TV work and a few low-budget features—but he obviously has some chops, and one can't help but be excited to see what he does next.)

Nonetheless, these clever approaches are working a little too hard to elevate some very standard fare, and not enough effort was put into making the screenplay make sense or ultimately mean anything. The cast is good—in both timelines, the Kaylies are both the stronger characters and the stronger performances—with a particular standout in young Annalise Basso. (Perhaps it's only the structural and thematic similarities making me suggest this, but Cary Fukunaga should seriously consider Basso for the role of Young Beverly in his planned theatrical version of Stephen King's It.) But the characters are single-note horror movie characters, existing only as fodder for scares, not as independent people in their own right. (The underwritten parents are a particular problem: Katee Sackoff is masochistically game as the mother, but Rory Cochrane is stuck doing an unhinged impersonation of James Brolin's homicidal husband in The Amityville Horror.)

In any of the great supernatural horror movies—think The Haunting, or The Exorcist, or Poltergeist—the extraordinary is invading the ordinary, and we believe wholeheartedly in the real world being created long before we are asked to believe in the rules of the world beyond. In Oculus, however, the real world has no authenticity, and the supernatural world has no rules, and so we invest fully in neither. The characters exist in a horror film vacuum, and the events unfold in a phony situational bubble that can facilitate a few jumps, but which is ill-equipped to provide any genuine fear or emotional weight. By the time the abrupt and unsatisfying ending comes around, we just feel like we've seen a horror movie invaded by other horror movies.

For chill seekers, the current wave of competent, derivative ghost stories like Oculus may provide a pleasurable way to pass a couple of forgettable hours, but these films lack the emotional and spiritual stakes of the truly great spookfests. There's enough stylistic invention here to make me think Flanagan has it in him to make a truly engaging ghost story, but he needs to set his sights higher. For now—if you'll pardon the pun—Oculus can only provide a few pale reflections of much better movies.