My first reaction to Veronica Mars, Rob Thomas's big-screen sequel to his 2004-2007 TV series, is simply to be glad that it exists. I was a fan of the Veronica Mars TV show: much as its older cousin Buffy the Vampire Slayer had interpreted the hells of the teen-age years through horror tropes, Veronica Mars saw them through the lens of film noir, making its eponymous heroine a tougher, sassier, more cynical Nancy Drew for the 21st century. If Veronica Mars never quite navigated the halls of its high school setting with quite the emotional resonance of better shows like Buffy and Freaks and Geeks, it was still a witty, addictively entertaining program, anchored reliably by a star-making performance from Kristen Bell.

Alas, critical adoration and the devotion of a ferocious fan base never quite translated into actual ratings, and Veronica Mars was cancelled after its third season. Now, thanks to an unprecedentedly successful Kickstarter campaign, the bitch is back, nearly 10 years after she first appeared. Veronica Mars, the movie, is currently playing in select theaters, and via same-day video-on-demand release.

So we should probably address the question of whether Veronica Mars stands on its own as a movie, or serves as a suitable introduction to the character for those who haven't encountered her before. The answer, in both cases, is probably "No." If a "Marshmallow" (as the fans of the series seem to insist on being called) drags you to see the movie without any previous exposure, you probably won't hate it, but neither will you necessarily understand what all the fuss is about. (Marshmallows: your proselytizing urge will be much better served by convincing your friends to watch Season One of the show.)

Part of the problem is that this movie could have been called How Veronica Got Her Groove Back, for, at the ripe old age of 28, Bell's character is no longer the adrenaline-junkie, tough-as-nails defender of the underdog that she once was. After some narrated flashbacks to events of the series—intended to provide newcomers a little context—we learn that Veronica gave up on drama, sleuthing, and class warfare after the series ended, and left the corruption of Neptune, CA behind to attend law school at Stanford. As the movie opens, Veronica is once again dating her nice, boring, no-drama college boyfriend Piz (Chris Lowell), and interviewing for high-paying jobs at prestigious New York City firms that cater to Fortune 500 companies.

To newcomers, this will probably sound like a pretty good life. Fans of the TV show, however, will recognize that Veronica is about to sell her soul by hitching her wagon to the very 1-percent oppressors that she once despised and fought against. Fortunately, a timely intervention arrives in the form of a phone call from Logan Echolls (Jason Dohring), her bad-boy ex-boyfriend from Neptune. Logan—for the third or fourth time since she's known him—has been accused of murder, this time of his pop-star girlfriend Bonnie DeVille, who was formerly another classmate of theirs named Carrie Bishop. Veronica, reluctantly, agrees to come back for the weekend and see what she can do to help.

Coincidentally, this also happens to be the weekend their graduating class of Neptune High is gathering for their 10 year reunion, an event Veronica likens to Dante's going back to the Nine Circles of Hell "for old time's sake." But this of course allows Thomas to provide maximum fan-service, and the encounters with familiar faces—ranging from close friends Wallace (Percy Deggs III) and Mac (Tina Majorino) to mortal enemies like Madison Sinclair (Amanda Noret)—do provide a great deal of pleasure, even if few of these characters are given much to do. It is a tribute to the show and a credit to Rob Thomas that nearly everyone who ever worked on Veronica Mars was willing and eager to come back for the movie, but the crowd of cameos is likely to make the uninitiated feel exactly as though they have tagged along to someone else's high school reunion. (Even less successful are attempts to integrate new faces as "old" characters—like Martin Starr's Cobb or Gaby Hoffmann's Ruby—and convince us we just never noticed these particular students in the halls of Neptune High.) 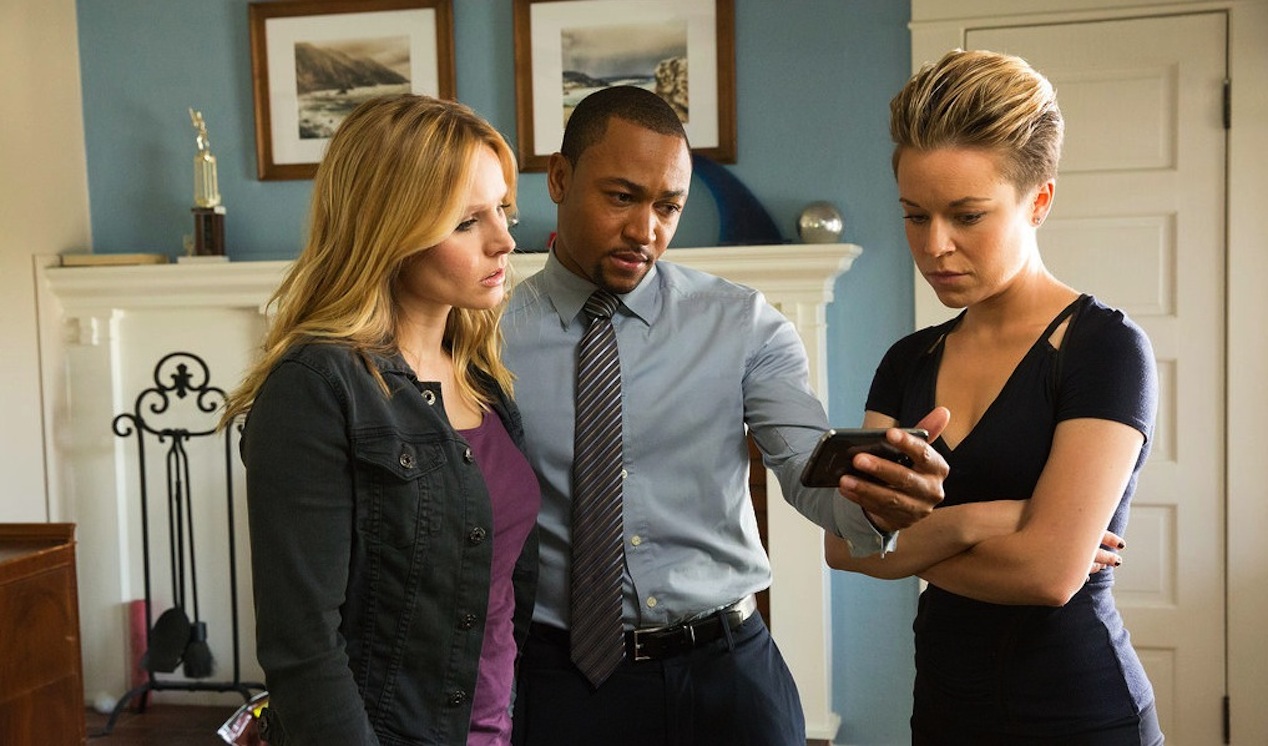 Plotting was never the strong suit in Veronica Mars, and it isn't here either: the mystery of Bonnie DeVille's death never quite picks up the speed or urgency it needs to feel like anything more than a B-minus episode of the series, and Thomas—who still seems to be thinking in season arcs—clutters the film with more than a few unnecessary and unsatisfying sub-plots. (A shoehorned storyline with Francis Capra's reformed gang member Weevil feels like an afterthought or a rejected plot for a different Veronica Mars movie.) The scale of the mystery is small for a movie, and so are the production values: it feels churlish to complain about the latter in a film financed by fans, but the sad truth is that the Veronica Mars TV show both looked prettier and felt more epic than the Veronica Mars movie.

The interpersonal storylines are a little more satisfying, but they seem watered down and simplified and never really given room to breathe. To me, the real love story on the TV series was the one between Veronica and her private-investigator father Keith, played brilliantly by the eternally underrated Enrico Colantoni. The younger and elder Mars had one of the best father-daughter relationships on television, and it is a pleasure to revisit it—but a little bit of the magic and mutual-respect is lost here when Keith Mars is mostly reduced to worrying about how his daughter may be throwing away her prestigious lawyer job. (Et tu, Keith? These are not Mars Family Values.) Similarly, the will-they-or-won't-they-get-back-together tension between Veronica and Logan is rendered somewhat toothless by the fact that Logan is no longer the charmingly volatile diamond-in-the-rough he once was. The chemistry between Bell and Dohring—which overpowered the series to the extent that it drove Veronica's original love-interest, Duncan Kane (Teddy Dunn), right off the show (and apparently out of the memories of everyone in the movie)—is still very strong, but the reformed 28-year-old Logan is simply not as interesting as the violent, drunken, bumfight-arranging bad boy he used to be.

Neither, for that matter, is Veronica Mars. In trying to put my finger on why the movie left me feeling pleasantly amused but ultimately unsatisfied, it may come down to this: Veronica Mars is simply not the same story with a 28-year-old character—Bell is actually 34—as it was with a 16-year-old. The key to the show's charm was the constant contrast of this plucky, pixie-looking teen-ager spouting hard-boiled-detective narration and exploring the dark underbelly of this sunny California community. She was a character who was always being underestimated, and always proving more capable than the adults around her. Now, Veronica Mars is herself an adult—not much different from a dozen other female amateur and professional sleuths we've seen—and so her cynical view and snappy zingers just don't have the same bite. It's a nice moment in the film when Veronica changes out of her lawyer duds, and opens a shoebox in her childhood closet that contains her stun gun, a disposable cellphone, and the other essential tools of her former trade, but the truth is that she can never go back to being the teen-age super-sleuth we once loved.

Which is not to say that fans won't find plenty to enjoy in the film version of Veronica Mars, or even that it was a bad idea: if nothing else, the film provides a welcome chance to catch up with old friends and find some closure. Veronica Mars does indeed give our titular heroine her groove back, and I'd be interested in seeing the sequels that the movie so carefully leaves her positioned to tackle. But now that we've been provided some fan-servicing, those sequels—if they come, in whatever form—should start from this new beginning and build a new mythology around Veronica Mars the grown-up. We can't go back to high school, and none of us—Veronica least of all—would really want to.

Until that happens, I think I'll go back and watch the series again. After all, a long time ago, we used to be friends.