As Paolo Sorrentino's exuberant, intoxicating new film begins, its protagonist, Jep Gambardella (Toni Servillo), is turning 65. "Happy birthday, Jep!" his admirers and well-wishers call out. "Happy birthday, Rome!" It is an early clue to what will quickly become clear: that The Great Beauty (La grande bellezza) is a film about a man and a city, both coming to terms with the glorious potential of their pasts, the disappointing realities of their presents, and the uncertain promises of their futures. Embodied in Servillo's charming, indelibly wise performance, Jep is Rome, and Rome is Jep: as we follow his lackadaisical journey in search of elusive meaning, it becomes impossible to imagine one without the other.

In narration, Jep explains the chief lesson he has learned from turning 65: "I can't waste time any more doing things I don't want to do." It is a curious comment coming from him, for Jep is an admitted and committed sensualist—"I was destined for sensibility"—standing with suave and effortless ease at the center of Roman high-society's never-ending party. In his youth, he wrote one widely admired novel, but then he never wrote another, drawn instead into the whirligig of the social scene. "I didn't just want to attend parties," he says. "I wanted the power to make them fail." He succeeded in this ambition: though now an arts journalist by profession, Jep's real job—at which he excels—is to be the universally acknowledged "king of the socialites."

But now, at 65, he wonders what it was all worth. Throughout The Great Beauty, Sorrentino juxtaposes the dazzling glitter of society with the elusive mysteries of existence and spirituality. (In the bravura opening sequence—in which the extraordinary camerawork of Sorrentino and cinematographer Luca Bigazzi sweeps us breathlessly into this world—we transition from listening to an all-female choir singing heavenly hymns at a hillside church, to the techno-music revelry of Jep's birthday party on the terrace of his apartment in the heart of the city.) In the hands of another filmmaker, this contrast would be a conflict—a struggle for the soul of the city—but here Sorrentino is doing something more subtle, less judgmental, and more holistically gentle. He does not—as Jep says late in the film—concern himself with "what lies beyond" this world, but with the world itself: the sacred and the profane are just things that co-exist, intertwined and inseparable, and perhaps—in their own ways—driven by the same essential human desire for beauty and purpose.

On one level,  The Great Beauty is a ruthless critique of the emptiness and superficiality of this life. Jep's meandering journey through Rome brings him, and us, into one unforgettable encounter after another with frivolous socialites, faded aristocrats, pretentious artists, vacuous clergymen, self-important intellectuals, and other colorful figures, all of whom fall under Jep's sardonic gaze and risk inciting his skewering wit. He is particularly harsh about artists who say nothing with their art: interviewing celebrated performance artist Talia Concept (Anita Kravos)—who performs naked with a hammer-and-sickle shaved into her red-dyed pubic hair, and whose act consists of running headfirst into a stone column—Jep slyly forces the woman to admit on the record that she doesn't have the slightest idea what she is even trying to say. We go to a Botox clinic that has the air and solemnity of a cathedral, in which socialites wait their turn with a master injector like penitents going to confession. We meet an artist who paints society women by throwing knives at them, the blades narrowly missing their bodies and splashing paint into rough outline portraits of his subjects. Another artist is very young girl (Francesca Amodio) whose parents drag her out at parties to throw temper-tantrums with paint against huge canvasses. ("She was crying," Jep's friend Romana [Sabrina Ferilli] protests, unable to watch. "Are you kidding?" Jep says. "She makes millions.") We meet a cardinal (Aldo Ralli) who can't stop sharing recipes for food, and can't begin to answer any spiritual questions. And we meet a beatific, Mother Theresa-type future saint, who has spent her life in poverty and humble service to the poor, but whose handlers drag her to parties to hobnob with the frivolous and faithless. 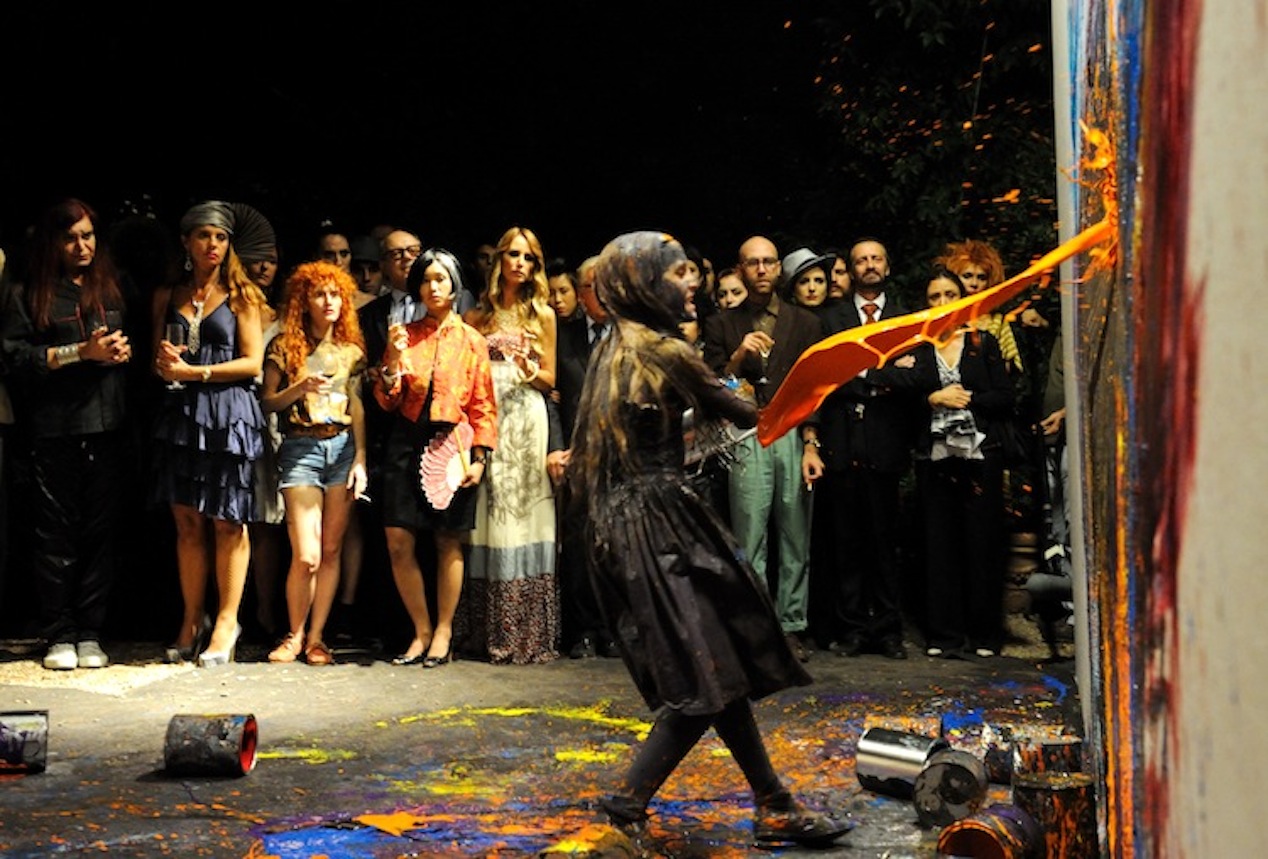 So sharp satire is certainly on Sorrentino's agenda, but it is not the whole agenda, and it is a kind of satire that is tempered with amusement and a remarkably tolerant sympathy for human failings. The Great Beauty opens with a quote from Celine's Journey to the End of the Night: "To travel is very useful, it makes the imagination work, the rest is just delusion and pain. Our journey is entirely imaginary, which is its strength.” Like Celine, Jep describes himself as a misanthrope, but—also like Celine—we see a gentle humanism in his sharply satirical observations about all the people he encounters. In one small but incredible scene, Jep's old friend Stefania (Galatea Ranzi), a self-professed intellectual, author, and Communist Party leader, is holding forth at a party about her own accomplishments, and suggesting that the friends she's speaking to—including Jep—are all frivolous and shallow in comparison. Jep eviscerates this woman with an extraordinary speech that cruelly—but, we are sure, accurately—punctures her self-righteous superiority and brings her down to earth. But what is remarkable about this scene is the way Jep pivots from a harsh (if justified) attack to something that is fundamentally a plea for kindness and understanding:

"Stefania, mother and woman, you’re 53, with a life in tatters, like the rest of us. Instead of acting superior and treating us with contempt, you should look at us with affection. We’re all on the brink of despair. All we can do is look each other in the face, keep each other company, joke a little. Don't you agree?" 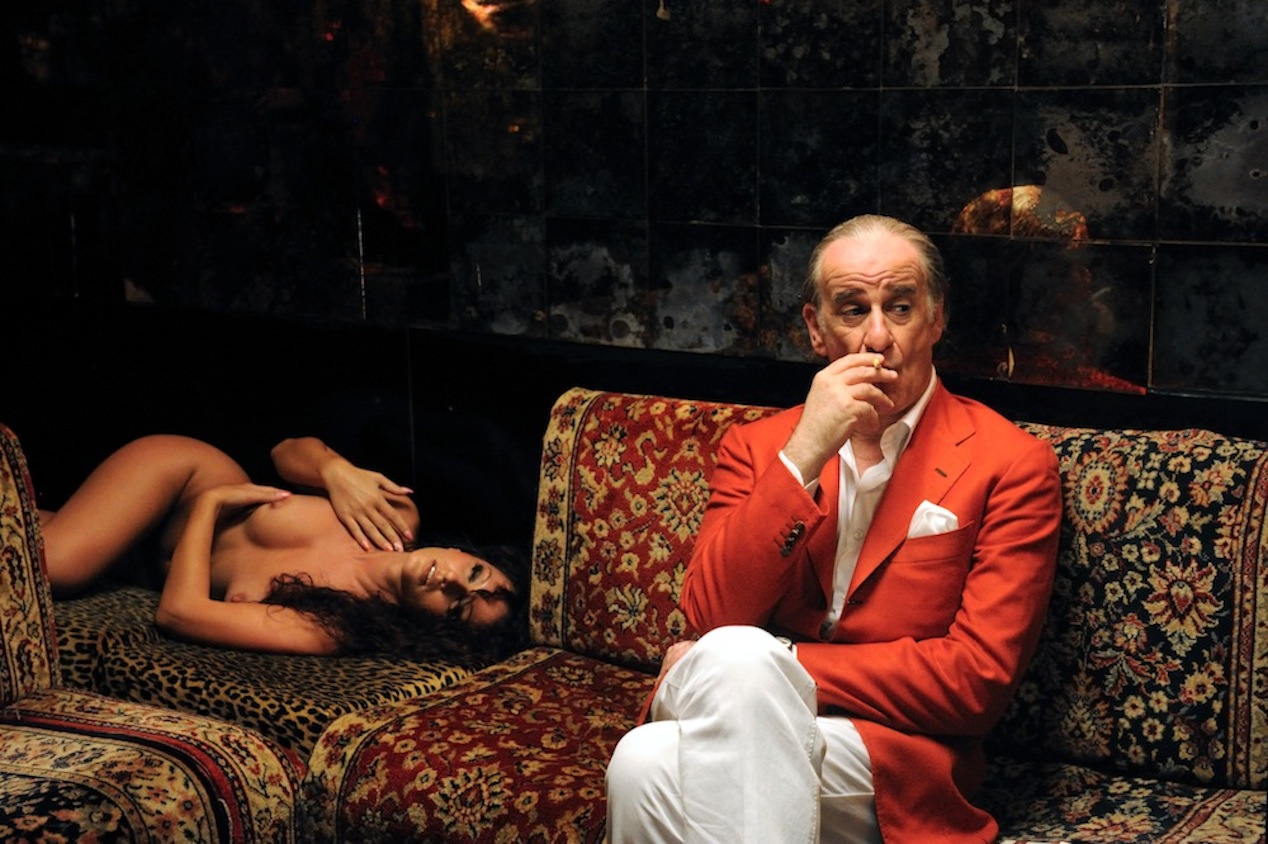 This humane, generous tone is, to me, is the extraordinary magic of The Great Beauty. Sorrentino finds plenty to skewer in his exploration of society, art, and the hedonism of modern life, but it is with a melancholic amusement that finds genuine human emotions inextricably entwined in superficiality, and recognizes the wonder and warmth of people even—or especially—at their most ridiculous. "In order to be taken seriously you have to take yourself seriously," Jep complains about the art world; Jep doesn't take himself so seriously, and The Great Beauty proves that profound and deeply personal quests for meaning do not have to be solemn and pretentious. In this, Sorrentino could have found no better Virgil to guide us through this world than Toni Servillo, on whose remarkable, incredibly insightful performance the film so reliably stands. As Jep wanders from one colorful, silly, gloriously absurd setpiece after another, Servillo brings both bemused wisdom and poignant pathos to Jep's observations about the world and himself. It is a performance for the ages, and an indelible character who might well serve us all as a guide for approaching the latter half of our lives.

On its surface, The Great Beauty is a gorgeous, euphorically satiric valentine to the Eternal City—with all its energy, romance, and art—and to the movies (particularly Fellini's) that have captured and created its mystique before. But it is also much more than that. Sharply funny, visually stunning, and with a generous heart, The Great Beauty is an exuberant celebration of life, and a rare and rich cinematic gift to all of us, wherever we might live. It is a reminder that—buried beneath what Jep calls the "chitter chatter and noise" and "the blah blah blah"—there are still "the haggard, inconstant flashes of beauty" that make it all worthwhile.