Ah, January: that special time when theaters offer the would-be movie-viewer a choice between the last prestige pictures of the old year and the first bottom-dwelling crapfests of the new. I usually spend my January catching up with the former, but I also feel obligated to make room for one or two of the latter, if only in the hope that an under-appreciated gem might be found by sifting through the clinkers and clunkers left each year on the great cinematic dumping ground.

In 2014, alas, this desperate quest remains unfulfilled so far. However, if you are looking for a perfect example of the product available in the Annual Hollywood Turd-Harvest, look no further than Stuart Beattie's mindless, humorless, mind-numbingly pointless I, Frankenstein.

Who, you might very well ask, thought we needed yet another re-telling of the Frankenstein story? The answer, as it turns out, is that no one thought that, since a box of Franken Berry breakfast cereal tries to be more faithful to Mary Shelley's story than I, Frankenstein. (The cereal is also more aesthetically pleasing and narratively satisfying, but we'll get to that.) Here, the barest bones of Shelley's 1818 classic are picked over liberally in about two minutes of dumbed-down prologue, after which Beattie (working from Kevin Grevioux's graphic novel) is free to concoct a lot of noisy and unrelated balderdash about an ancient war in which gargoyles and demons battle over the fate of humanity.

Gargoyles, you see, are the good guys: agents of Heaven charged with watching over the human race from their stony vantage points. (Wasn't that basically the premise of a cartoon in the '90s?) They are led by Leonore (Miranda Otto), a sage, formidable queen who will do anything to protect the Earth from the forces of evil.

Demons, you see, are the bad guys: agents of Hell charged with…doing bad, evil, things. (It's not entirely clear.) They are led by Bill Nighy, who will, it seems, do anything for a paycheck. (I had hoped that the great Nighy might at least provide some scenery-chewing fun, but no: the entirety of his contractual obligation seems to have been "show up and read the lines," and Mr. Nighy —who can blame him?—does not exceed those parameters.)

Caught in the middle is Frankenstein's monster, rechristened "Adam" (Aaron Eckhart, apparently giving up once and for all on a once promising career). What the demons want is to study the monster and learn the secrets of reanimating corpses (for spoilery but dumb reasons). What the gargoyles want is to prevent this. What Beattie wants is to shoot one identically murky fight scene after another—without bothering with excitement, craft, or logic—and so the entire "plot" of I, Frankenstein consists of gargoyles and demons taking turns crashing into each other's headquarters to play Capture the Flag with the melancholy monster.

Gargoyles, demons, and monsters, oh my: there are no people in this movie, in any sense. In terms of character development, forget it: there are simply no characters, just barely-distinguishable figures who scowl, fight, and explode. There are also, almost literally, no humans: with the exception of a conveniently beautiful scientist (Yvonne Strahovski), gargoyles and demons seem to be the entire population of the dark, unnamed modern city in which I, Frankenstein takes place. (This isn't a plot point: it's just laziness and lack of interest in the actual human beings these two cartoonish groups are fighting over. In an early scene, Leonore chastises Frankenstein's monster for being so indiscreet as to fight with a demon in an alley: the humans, after all, must never know about the eternal war twixt demons and gargoyles. In every other scene of the movie, however, the demons and gargoyles have huge, noisy, city-block destroying battles in which hundreds of fallen demons and gargoyles explode in massive balls of fire and light. Do the humans think all those pyrotechnics are a series of fireworks factories exploding? We don't know, and we don't care, and neither does the movie.)

To the extent that Eckhart's protagonist has a "character arc," it's to answer the question of whether it is proper to refer to "Adam" as a "he" or an "it." Let me save you some trouble: flat, monotone, and dull as dirt, Adam is an "it," and so is everyone else in the film. It's a movie of "its."

The best, most accurate, most damning review I could write of I, Frankenstein would consist of nothing more than quoted lines of dialogue from the actual movie. Unfortunately, for most of the film I couldn't be bothered to listen that closely, but here are a few choice samples:

"I care not for the worlds of men."

"We need to get to the Gargoyle Queen!"

"I am a Demon Prince! You will kneel before me!"

To say all of this would be better suited to a video game than a motion picture is an unforgivable insult to the art of video games. I've played video games that had better dialogue, better storylines, better acting, and better characters. Even the fight-scenes—the B-movie mayhem that the plot and characters exist solely to serve—are a substandard mess of clutter and cliche. The creature design is lazy, the special effects are sloppy and unimpressive, and the fight choreography is repetitive and unengaging.

Thus, with no redeemable element except a lot of explosions, it is difficult to imagine that anyone with a mental age above 12 could possibly enjoy a single moment of I, Frankenstein. This, however, creates something of a paradox, as the film is rated PG-13. If no one under the age of 13 can see a movie, and no one over the age of 12 could possibly appreciate anything about it, then who should see it? Let us see if we can resolve this conundrum with a Venn diagram: 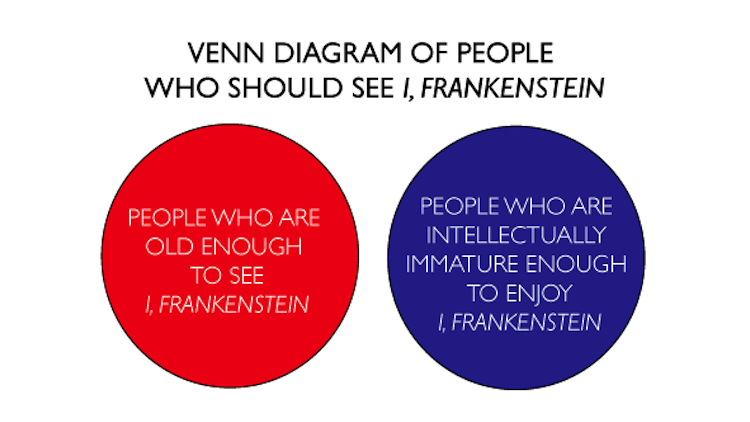 You do the math.