"Falling in love is a crazy thing to do," we are reminded halfway through the extraordinary new film Her. "It's kind of like a form of socially-accepted insanity." And certainly the premise of Her—in which the protagonist, Theodore Twombly (Joaquin Phoenix), falls in love with his computer's operating system (voiced by Scarlett Johansson)—sounds suitably insane on paper. However, as he did in the equally high-concept Being John Malkovich, writer-director Spike Jonze grounds this inventive, off-kilter world with authentic, well-rounded characters, and uses a preposterous sci-fi premise to explore recognizable human experiences in new and revelatory ways. The miracle of Her is how quickly, and how touchingly, it becomes not a story about a man falling in love with a machine, but about the universal experience of falling in love. Smart, wise, and emotionally rich, Her turns out to be one of the most believably touching romances of the 21st century so far, and easily one of the best pictures of the year.

In his review of Being John Malkovich, Roger Ebert said the film had "ideas enough for half a dozen films," and that observation could be equally applied to Her. Phoenix's Theodore, for example, has a job with a company called BeautifulHandwrittenLetters.com, in which he composes personal, intimate missives for clients too busy, disconnected, or ineloquent to write them themselves. Another filmmaker might make this conceit the basis for an entire movie, but here it is just one intriguing idea in a film full of them. And, like all the high-concept conceits in Her, it is an element that could be clumsily satirical or unbearably twee, but which here seems like a gently and perfectly skewed reflection on the times in which we are living.

For, like all the best science-fiction, Her—which takes place in the Los Angeles of some unspecified number of years from now—is a film decidedly of its time, gazing into the possibilities of the future in order to encapsulate and explore what it feels like to be alive in the present. In an age in which so much of lives and relationships are conducted electronically—in text, and on-screen, and with ever-present voices in our ears—the not-too-distant future Jonze brilliantly imagines feels not only plausible but familiar. Technologies change, and social interaction evolves, but the urge to connect is timeless.

One of the best things about Her is the way in which it does not judge these different kinds of connection, but recognizes that they are powered and driven by ancient impulses, are capable of expressing universal emotions, and are subject to the same human failings as any other kind. Minor plot points throughout the film echo and offer different perspectives on the places where emotional interaction meets technology: Amy (Amy Adams), Theodore's best friend, for example, is developing a video game about motherhood, in which the mundane domesticity of parenting becomes challenging entertainment. Theodore himself plays an interactive video game in which he develops protective feelings for a foul-mouthed but endearing little computer sprite, and this form of connection—in addition to the more obvious one at the center of the movie—is a more genuine emotional connection that those he achieves with real people through anonymous chat rooms. Everywhere, real human experiences are being filtered through electronics, but the value and authenticity of those experiences are dictated by the substance, not the medium, of the interactions. 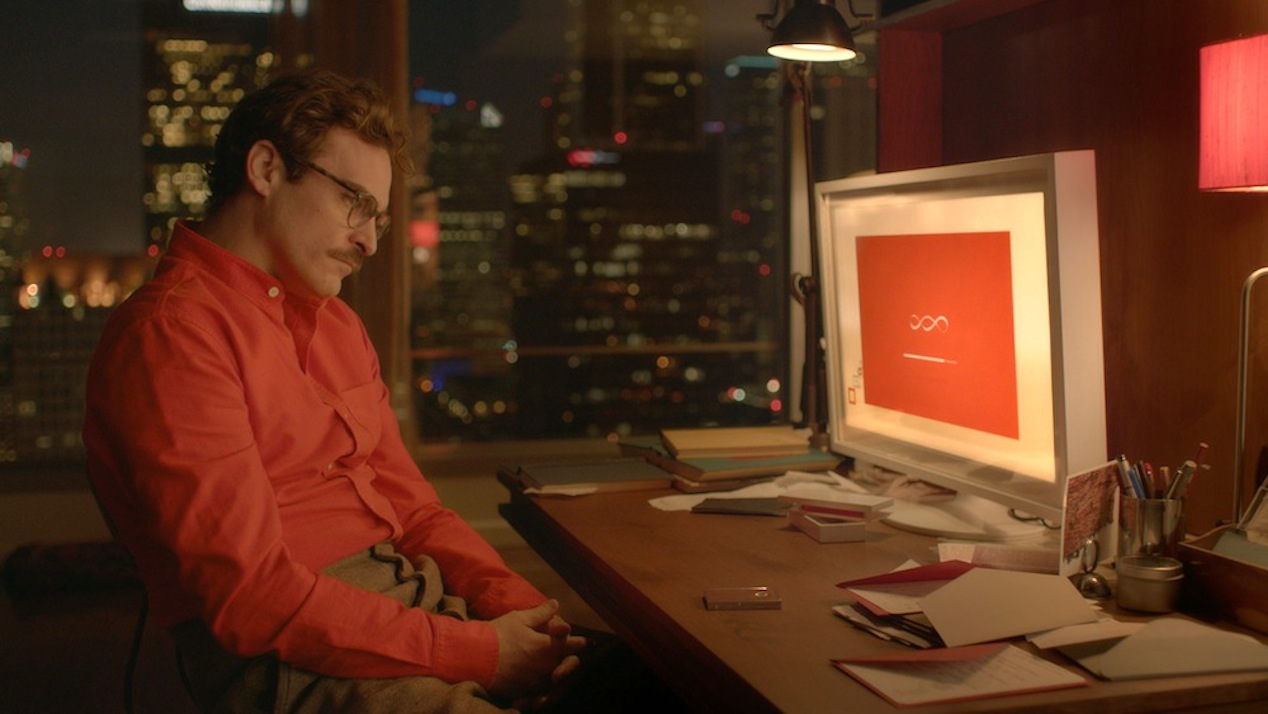 So when Theodore becomes an early adopter of a new piece of software called OS1—touted as "the world's first artificially-intelligent operating system"—none but the most pedantic and nitpicky viewer will find it difficult to believe the relationship he develops with "Samantha," his personal OS (voiced with breathy, heartbreaking humanity by Johansson in a rich, fully-developed performance). The details of the technology itself do not interest Jonze, and it's one of the remarkable accomplishments of the film that any questions we may have about the parameters or limitations of the software quickly seem irrelevant: the movie simply asks us to accept the central conceit completely, and—thanks to Jonze's light touch and the two stellar central performances—we do. Warm, funny, and inquisitive about Theodore and the world, Samantha blossoms from Theodore's electronic assistant into his friend and confidante—and then into something more.

The key to this—and the genius of the film—is that Samantha's evolution from software to soul-mate feels not so much like a piece of machinery achieving sentience, but more like the way another human being blossoms into complexity the more we open ourselves up and get to know them. And their relationship, too, develops in a way that feels heartbreakingly real and familiar, like a long-distance relationship in which there just doesn't happen to be a physical presence on the other side of the phone calls. It is one of the most charming aspects of the world Jonze imagines that most of the people around Theodore accept his relationship with nary an eyebrow raised: in much the way that online relationships have become utterly commonplace to us, a love affair with an artificial intelligence is accepted here as just another kind of love, no stranger—or easier—than any other. "Is it not a real relationship?" Amy asks him, when he begins to have doubts, and Her works because it is: for the most part, neitherthe pleasures of this new relationship, nor its risks, are unique to their peculiar situation. It is always both joyous and terrifying to make yourself vulnerable and begin sharing your life with someone else; it is always a necessary leap of faith to see the object of your desire as a real person, with individuality and agency; it is always a challenge to hold onto the things you selfishly love about a relationship while simultaneously allowing the possibility that you, or they, might change.

Her has such a precarious, high-wire act of a concept, and yet everything about it is so perfectly balanced and deftly executed that it feels more genuine and grounded than almost any movie I've seen this year. It is so easy to go overboard with science-fiction, but the futuristic world Jonze has built is exquisitely and subtly embellished with details that make it believably the near-future, from architectural changes to the Los Angeles skyline (cleverly spliced with bits of Shanghai), to pastel colored plasticine interiors, to the way high-waisted woolen pants have apparently come back into style. Especially considering that it is, on paper, largely a film about a man talking on the phone, Her is one of the most visually beautiful films of the year. Jonze has a gift for shot framing that seems almost Kubrickian—only warmer—and the gorgeous cinematography is by Hoyte Van Hoytema, who has previously demonstrated such evocative prowess with mood in films like Tinker, Tailor, Soldier, Spy and Let the Right One In. Aided considerably by a beautiful, haunting score by Arcade Fire, the world of Her is wholly, wondrously immersive.

And—more importantly—the characters are drawn with as much care as the world they inhabit. It would be easy to imagine a version of this story in which the protagonist was simply a socially dysfunctional nerd disconnected from real people—one who had to learn to come back to humanity, perhaps—but Phoenix's Theodore is fully rounded character who can't be reduced to type or facile function. Jonze writes people, not plot points, and Phoenix—in perhaps the best performance of his impressive career—inhabits this sad, quiet, complicated, emotionally conflicted man fully. Theodore is lonely, and a little isolated, but he also demonstrates remarkable empathy, a capacity for real care and warmth, and, at times, the soul of a poet. In well-timed, beautifully believable flashbacks we see Theodore's relationship with his wife Catherine (Rooney Mara), from whom he is now separated, and these scenes have an intimacy and authenticity that go far beyond the candy-colored nostalgia for a lost love that suffices for most such montages, becoming heartbreaking glimpses of a genuine love affair. We are so accustomed to seeing characters and situations presented in cinematic short-hand that the kind of care Jonze takes with his people here is startling and revelatory: even minor characters—like the unnervingly eager woman (Olivia Wilde) with whom Theodore shares a quick and strange blind-date—seem like richly complicated people, fascinating and damaged and achingly desperate to connect. 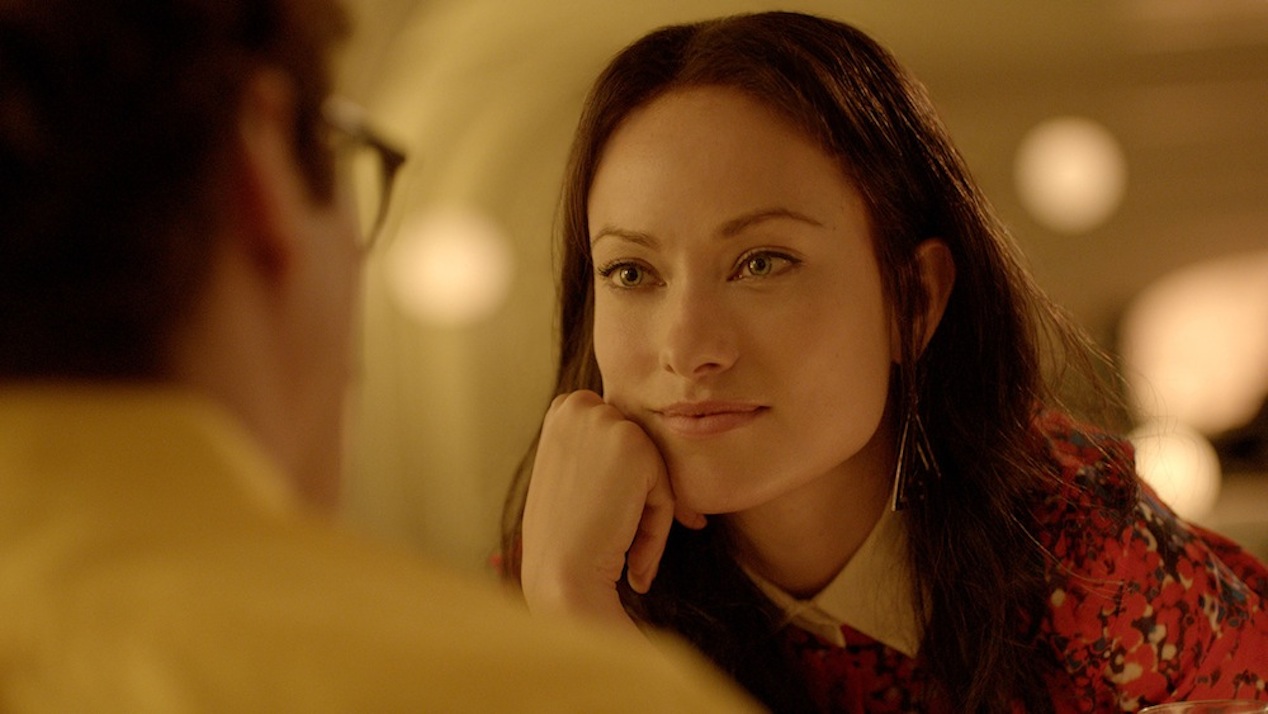 I suspect that many will see this film as a satire of—or even a diatribe against—the way technology is progressively alienating us from each other; certainly, the film provides plenty of support for that view—and endless fuel for conversation about the subject—but in the end I don't see moral judgement or Luddite outrage in Jonze's agenda. Her takes how social interaction has changed as its starting place, and extrapolates from there to how such things may develop, but Jonze is ultimately interested in using those concepts to explore the things that don't change.  As such, Her is not really a film about relationships between humans and machines, but about relationships: it is about the loneliness, the tentative opening of hearts, and the wonder of seeing the world through another's eyes. It is also about the difficulties of truly connecting to another person, the potential for miscommunication and mistrust, and the courage involved in letting our partners grow as individuals—even when we're terrified that they may one day grow beyond us. Funny, sad, and imaginative, Her is a futuristic love story that is both poignantly evocative of our times, and—in its humane insight and gentle wisdom—truly timeless.