Expectations are tricky things. Based on the premise and trailers, I went into Pacific Rim expecting it to be little more than a live-action cartoon and toy-commercial in which giant robots and giant monsters punched each other in their respective faces for two hours. The x-factor here, however, was director Guillermo del Toro, the genuinely visionary filmmaker who brought real warmth and wit to the Hellboy franchise, and who created one of the first truly great movies of the 21st century in 2006's haunting Pan's Labyrinth. So the marketing for Pacific Rim told me that I should expect to be disappointed, while the evidence of del Toro's past work led me to hope that there would be more going on here than met the eye. It was with these mixed preconceptions—half-dread, half-excitement—that I ventured down to my local IMAX to don my 3D glasses and experience Pacific Rim.

And what I experienced was a live-action cartoon and toy commercial in which giant robots and giant monsters punched each other in their respective faces for two hours.

Don't get me wrong: if we have to make movies like Pacific Rim, Guillermo del Toro is a good choice to helm them. Within its own very narrow parameters, Pacific Rim delivers exactly what it promises. The film is a marriage of two classic sub-genres of Japanese science fiction: mecha (giant robots, familiar to my generation of Americans from such anime imports as Voltron and Shogun Warriors), and kaiju (giant monsters, familiar to all of us from classic films like Godzilla, Rodan, and Mothra.) These two archetypes have battled each other before in cartoons and comic books, but I suspect the ideal audience for Pacific Rim is the kid—and the adult of any age who is still in touch with his or her inner child—who has long dreamed of seeing this classic match-up fully realized in live-action on the big screen.

Those actual and spiritual kids hoping for nothing more than a slug-fest for the ages will not be disappointed. Pacific Rim is a tremendous achievement in special effects, one stunning on any scale but nearly stupefying when viewed (as I viewed it) in 3D on a six-story IMAX screen. Scale is the key word here: this is a story about 250-foot tall creatures, and every inch of their creation has been lovingly imagined and realistically realized. With gorgeously detailed design-work—including thunderous, near-deafening sound design—these creatures have a weight and majesty and force unlike anything ever seen on-screen. The (literally) gigantic fight scenes that are Pacific Rim's entire reason for being are overwhelmingly fun, and I have more than enough 12-year-old boy in me to grin like an idiot when a giant robot picks up a huge cargo ship to wield as a sword, or when an already-dangerous creature the size of a city block spreads wings out of nowhere and takes the fight to the air.

So yes, the audience members hoping to see del Toro smash enormous, utterly realistic action-figures together in inventive ways will be satisfied. But what about those of us who might be hoping for that and something more? It is there that Pacific Rim disappoints, and it disappoints on as large a scale as it succeeds.

The "story"—and I just about managed to keep a straight face as I typed that word—is simple but serviceable. We learn in a promising prologue that the Earth has been under attack for a dozen years from a steady series of kaiju who have been emerging, one after another, from a trans-dimensional rift in the ocean's floor. After several cities were obliterated by the giant beasts, the governments of the world banded together to create giant mechanical warriors that could fight them on their own terms.  These robots—called "jaegers"—are piloted by two-man crews who are psychically linked, to the machine and each other, through a complicated neural-interface. (If you're asking yourself the logical question of why anyone would build ungainly humanoid robots to do a job that drone missiles might accomplish more easily, you've clearly purchased a ticket for the wrong movie.)

Raleigh Becket (Charlie Hunnam) and his brother Yancy (Diego Klattenhoff) were one such team of pilots, until a kaiju attack killed Yancy and left their jaeger in pieces. Shell-shocked Raleigh has become a construction worker, gaining work on a gigantic wall that the governments have now decided is a better defense against the creatures than an army of giant robots. (If you're asking yourself the logical question of how a brick wall—yes, it's made of bricks—is expected to stop creatures who tear through metal skyscrapers like paper, you're still in the wrong movie. If you're trying to figure out if there's some metaphoric subtext about immigration policy at work, you're in the wrong movie AND the wrong mindset.)

But General Stacker Pentecost (Idris Elba)—because this is a movie where people are named "General Stacker Pentecost"—is still convinced the jaegers are the planet's only hope, and so he recruits Raleigh back into the program. Raleigh, however, needs a new co-pilot, and so we are introduced to Pentecost's young ward Mako Mori (Rinko Kikuchi), a kaiju-attack survivor and wannabe jaeger pilot. Gosh, do you think these two crazy kids—the reluctant, battle-scarred veteran and the plucky young prodigy—could turn out to be humanity's last, best hope for survival? 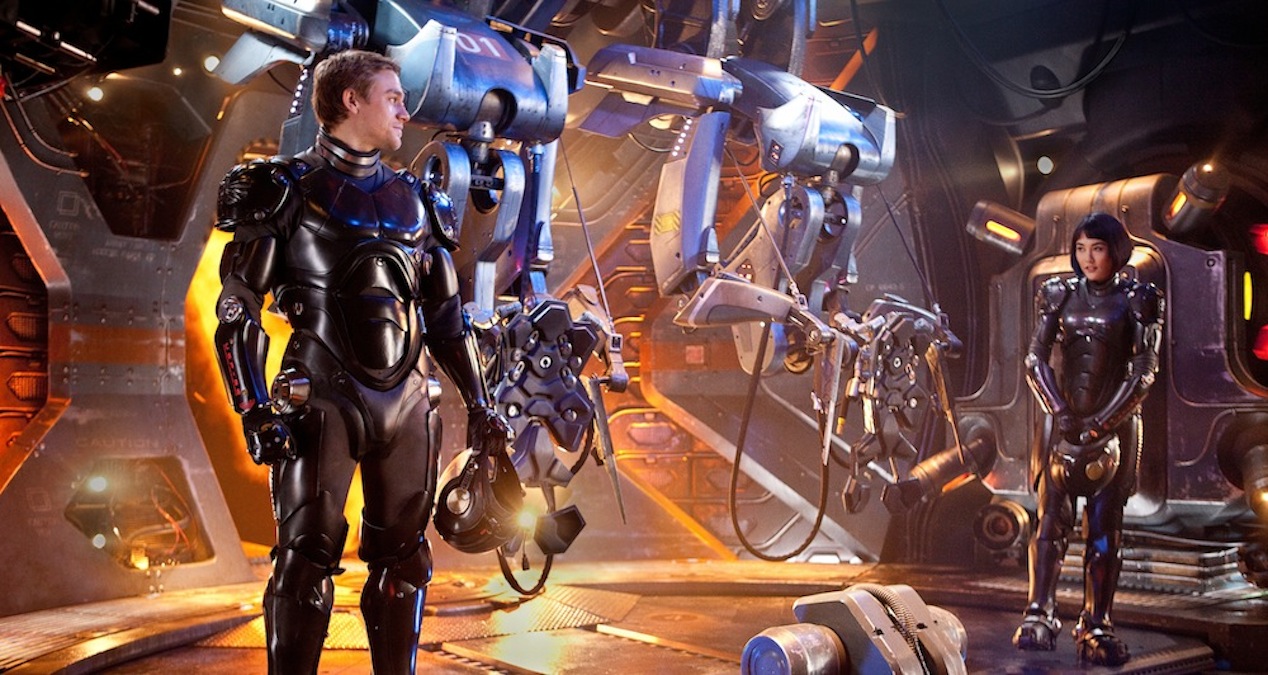 If you don't already know the answer to that question, there's nothing I can do to help you. The plot of Pacific Rim is deliberately, almost aggressively formulaic in its construction, which is not, in itself, a problem. (So was the plot of Star Wars, but many of us found that enjoyable.) But Pacific Rim is equally unoriginal in most of its other elements. The notion of a world that has suffered from an endless string of Godzilla-level attacks is intriguing, but we see virtually none of how this has affected society beyond the prologue. The idea of the neural interface that lets the pilots share memories is potentially fruitful, but it's never used for anything more interesting than lazy exposition. What we're left with, then, are things we've seen a million times before, from the largest, city-obliterating setpieces down to the smallest lines of dialogue (all of which—I swear—are recycled word-for-word from other movies). Again, some of this is deliberate: del Toro and screenwriter Travis Beacham are clearly going for an innocent, WWII-movie style tone here, gleefully checking all the boxes and embracing all the clichés. But the fact that this is what they're going for doesn't make it work: instead, it makes Pacific Rim play like Starship Troopers, butwithout the irony and self-awareness.

So the sad truth is that Pacific Rim succeeds marvelously as a display of technical prowess, but fails miserably on every other front. Even by the diminished standards of the summer blockbuster—from which we expect thin characters and dumb, derivative stories—the characters are too thin, the story too dumb and derivative. (Super 8, from two summers ago, is a good example of how to build a kaiju movie on a foundation of genuine characters, but that is perhaps an unfair example.1996's Independence Day is probably a better comparison—in terms of scope and ambition—and though it's not a movie I often think to speak highly about, it is a superior summer blockbuster to Pacific Rim, with a more interesting story, better characters, and more overall stupid fun.)

And it's a shame, because there's no good reason for these failings: del Toro knows that the fight scenes between robots and monsters are the payoff here, but he makes plenty of time between such title-bouts for these characters to just hang around the base training. This is time and narrative space that could have been spent on character development—which might have made us actually care about the outcomes of the battles—but it turns out to be time largely wasted. Every "character"—and again, I use the term loosely—is exactly what he or she appears to be, and there is not an ounce of real wit, development, or emotional progression to be found. Hunnam is a handsome but dull protagonist, a generic action hero in the featureless mold of Avatar's Sam Worthington. Elba is, as always, a commanding presence, but that's all he's called on to be: he is playing a type, not a character. (The same can be said of dueling—and often grating—comic-relief scientists played by Charlie Day and Burn Gorman. Faring slightly better is del Toro standby Ron Perlman, in an amusing extended cameo: the tongue-in-cheek Perlman at least knows what kind of movie he's in.) Only Kikuchi brings any genuine emotional life to the proceedings: her Mako Mari is the closest thing Pacific Rim has to a heart, but even this endearing performance is in service of a problematic character, one who too often reinforces all the clichés and stereotypical qualities of the so-called "weaker sex" in action movies.

Pacific Rim clearly cost hundreds of millions of dollars, it will no doubt make a billion dollars or more, and I have to believe it will garner any number of well-deserved awards in technical categories. But for all that, I have trouble seeing why it was worth a single minute of Guillermo del Toro's time, and I would not trade a single moment of his better films—like Pan's Labyrinth—for the entirety of this bloated, bone-shaking monstrosity. "Go Big or Go Extinct," the awkward tagline for Pacific Rim reads, but there is no better proof than this film that bigger is rarely better. Let us hope that this blockheaded blockbuster lets del Toro get whatever over-sized urges he has out of his system, and that its inevitable success will pay for any number of smaller, more personal projects from one of our most talented and visionary directors.

The Additional and Obligatory Note About Whether You Should See Pacific Rim in 3D: No, absolutely not. The fights are the only reason to see the film at all, and they almost all take place at night in the middle of the ocean: 3D just makes them murkier and harder to follow than they already are, and adds absolutely nothing to the experience. If you have the option of seeing this in 2D IMAX, do it: otherwise, stick to a 2D showing on a traditional screen.