Most of the pre-release discussion and buzz around Joss Whedon's Much Ado About Nothing has focused not on what it is, but on the hows and whys of the thing. There has been a strangely amused fascination with Whedon's decision to follow The Avengers—a mega-franchise movie with a nine-figure budget and a ten-figure take—with a no-budget, black-and-white adaptation of one of Shakespeare's lightest plays. After all, coming off one of the most successful blockbusters in history, this man could do anything, and work with anyone, for all the money: instead, he chooses to act like a film student, and spend 12 slapdash days shooting an indie-spirited little movie at his own home with his TV actor friends. He's pretending he's still little people! How charming! How quirky! How eccentric!

How absurd. Yes, Much Ado about Nothing was filmed quickly and cheaply—and among friends—in what was supposed to be Whedon's vacation during post-production on The Avengers. But to treat Much Ado as a palate-cleansing vanity project is to do the film a great disservice, for it is much, much better than that.

Much Ado is good for exactly the same reason that The Avengers is good: because Whedon understands stories as well as any filmmaker working today, and can translate that understanding onto the screen in a way that brings each story to appropriate and exuberant life. The Avengers was a tale that required several years and several hundred million dollars to do right, but Much Ado is a stage play, and in some ways—as its author implied in the title—a deeply silly one: it benefits from a lighter touch, and an energy that is both more spontaneous and more intimate. I have no doubt that Whedon could have secured more money, taken more time, and hired better-known (though not better) actors to film Much Ado About Nothing, but I doubt the result would have been any better than this. Funny, insightful, and genuinely romantic, Much Ado About Nothing is one of the best movies of the year, and one of the best Shakespeare adaptations ever captured on film.

I'm not an Elizabethan scholar (believe it or not), but I don't think it's much of a stretch to say that Shakespeare more or less invented the romantic comedy as we know it, and Much Ado is one of his most perfect examples of the genre: it's full of witty banter, comic misunderstandings, and self-invented drama. The story, briefly, is as follows: Don Pedro of Aragon (Reed Diamond), fresh from victorious battle, has brought his entire retinue to vacation at the home of the honorable Senor Leonato (Clark Gregg) in Messina. There, a distinguished young soldier named Claudio (Fran Kranz) falls quickly in love with Leonato's innocent daughter Hero (Jillian Morgese), while Pedro's right-hand man Benedick (Alexis Denisof) renews a long-standing "merry war" with Leonato's niece Beatrice (Amy Acker).

The first couple falls together naturally enough, but the second will take some doing. Beatrice and Benedick have a great deal in common: they are both single and highly attractive people; they are both quick-witted and acid-tongued; they are both fiercely loyal to their friends; and they are both contemptuous of romance and dismissive of would-be suitors. Clearly, they are destined to be together, and so of course—in the time honored fashion of rom-coms throughout history—they can't stand one another. To pass the time in the week before the wedding of Claudio and Hero, the meddling, well-intentioned friends of Benedick and Beatrice undertake a complicated conspiracy to bring the bickering and romance-averse duo "into a mountain of affection, the one with the other." (Working against both couples is Pedro's bastard brother John [Sean Maher], a self-confessed "plain-dealing villain" who exists more or less to provide the plot with a malevolent monkey wrench.)

Much Ado works so well for modern audiences—and, as here, in modern dress—because this formula is so reliable and familiar: romantic comedies are almost always about two people who are the only two people in the world who don't know they belong together. (Shakespeare himself, of course, returned to this well several times, though to my mind he never created a better comedic pairing than Benedick and Beatrice.) Unlike other Shakespearean comedies—The Merchant of Venice, for example—Much Ado really is much ado about nothing: despite some manufactured drama, the stakes are ultimately small and personal, and so Whedon's approach here is exactly right. In a manner that will perhaps be jarring to those who only know grandiose, self-important stagings of Shakespeare, Whedon films Much Ado like exactly what it is: a witty comedy about people who gather at a big house for a party, drink too much, and make some questionable romantic and sexual decisions. In doing so, he reminds us that Shakespeare can be very funny, and very sexy, and at times very silly. With a brisk, almost improvisational energy, Whedon's Much Ado sometimes feels like it has more in common with films like The Big Chill and The Anniversary Party than it does any filmed version of Hamlet—and that's a good thing. Much Ado has some of the most naturalistic dialogue in Shakespeare's collected works, and—when spoken correctly, as it is here—we can fall into its playful rhythms quickly, and we not only appreciate but thoroughly enjoy its wit and insights.

For Whedon's Much Ado About Nothing is both very funny and very insightful. It is funny not in the way we must, in some productions, pretend we find the jokes in Shakespeare amusing, but actually, laugh-out-loudfunny. The dialogue itself is more than sufficiently razor-sharp and full of double-entendres, and Whedon uses the makeshift stage of his own house to find some extra laughs in slapstick staging and contextual sight gags. (Denisof delivering one macho speech while sitting beside a very girly dollhouse in a child's bedroom is an early delight.) In almost every role, Whedon uses veterans of his earlier productions—from TV shows like Buffy the Vampire Slayer, Angel, Firefly, and Dollhouse, and movies like Serenity, The Cabin in the Woods, and The Avengers—and there's a reason beyond loyalty that he keeps hiring the same actors: it's because they're good. Casting is a particular gift of Whedon's, and here the entire company consistently finds interesting and original line readings, with particular standouts in Gregg, Diamond, Kranz, and Nathan Fillion (who plays watch commander Dogberry—one of Shakespeare's best clowns—as a sort of self-important but bumbling fraud of a TV police detective). I mean it not as an insult to Shakespeare, but as a compliment to Whedon and his cast, to say that the dialogue here comes across with the delicate wit and timing of the best of Joss Whedon's own scripts.

Any staging of Much Ado lives or dies with its Benedick and Beatrice, however, and this one not only lives, but sings. Denisof, who played Wesley Wyndham-Pryce on Buffy and Angel (and also had a recurring role on Whedon's Dollhouse) has a particular gift for subtly (and not-so subtly) puncturing the pomposity of his own characters. This turns out to be perfect casting for Benedick, the self-avowed bachelor and cynical ladies man who actually has—as was once said of Wesley on Buffy—the emotional maturity of a blueberry scone. Benedick is a character who protests too much, and the early scenes of wise-cracking, too-cool-for-school Benedick are unconvincing in just the right ways: Denisof seeds them with just the right levels of pretense, posturing, and insecurity to make the way Benedick turns to romantic jelly in the third-act both believable and touching. 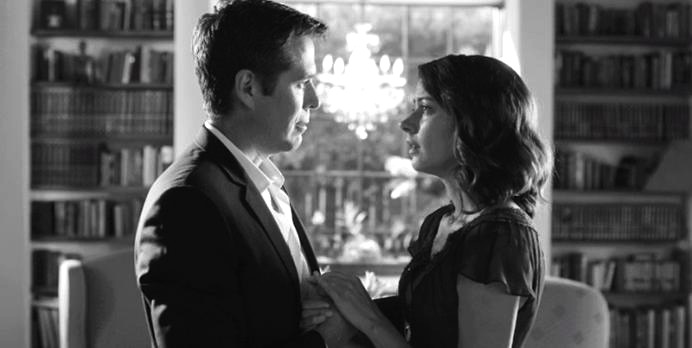 And, as Benedick's counterpart Beatrice, Amy Acker is a revelation. Acker is another Whedonverse veteran (from Angel, Dollhouse, and The Cabin in the Woods), and—as with many Whedon favorites, including Kranz—I've never been able to watch her without wondering why she isn't a huge star. Luminously beautiful, and able to turn on a dime between deft comedy and heartbreaking pain, Acker is the real deal, and here she absolutely owns one of Shakespeare's greatest roles. (We are only halfway through the year, but I can already say that any end-of-the-year nominations or "Best Of" lists that don't include Acker's name will be automatically invalid.) Beatrice—"Lady Disdain," as Benedick calls her—is a complex character: independent, self-possessed, at turns joyous and sad, and capable of both devastating wit and explosive fury. Acker captures all of these colors and more, carefully layering the self-aware amusement beneath Beatrice's sadness, and the hurt and fear beneath her quick-witted jibes: it's a charming, delicate, dazzling performance. In a small-but-justifiable deviation from the original play, Whedon shows us flashbacks of an earlier—perhaps one-night—affair between Beatrice and Benedick, and that history provides a rich subtext to everything both actors do. "I know you of old," Beatrice says to Benedick, and we receive from Acker's eyes alone a full understanding of the underlying passion, and the seething hurt, and the terrifying risk of these bantering encounters with Benedick.

For that, in the end, is what Much Ado About Nothing is actually about: it's about the fear of love, the horror of rejection, the terrifying leap of faith involved in opening your heart and making yourself vulnerable to another human being. It is, ultimately, about the necessity of lowering your guard, dropping your need to appear "cool," and giving yourself to the foolmaking humiliations of real emotion. This is a very Shakespearean theme, of course—love makes asses of us all in the end—and it's also a very Whedonian theme, one the director has explored throughout his works, from Buffy (particularly the musical episode) to Dollhouse to Dr. Horrible's Sing-a-Long Blog. It's only when we strip away our own public personae—our defenses, our pretenses, our carefully constructed identities—that real connection is possible. No matter how cool we pretend to be, we're all really dorks on the inside, especially when it comes to love: Shakespeare understood that, and so do Whedon and his cast, and it is this perfect marriage of play to players that gives Much Ado its generous, joyous heart.