Spoiler Level: Low: I've not spoiled any surprises, but this post can't completely avoid hinting at the general nature of certain surprises. If you want to go in completely free of expectations, best to see the film first.

J. J. Abram's Star Trek Into Darkness presents me with a critical dilemma, because I both thoroughly enjoyed it and found it a terrible misfire. In contemplating the root of this conundrum, a famous line of criticism kept running through my mind. Widely (though perhaps apocryphally) attributed to Samuel Johnson, and loosely adapted for my own purposes, it goes something like this: This movie is both good and original. Unfortunately, the parts that are good are not original, and the parts that are original are not good.

The second film in the rebooted Star Trek franchise, Into Darkness is undeniably a lot of fun; unfortunately, it's also an unforgivable retreading of fun we've had before, an appalling paucity of ideas cynically masked in the guise of homage. Twelve year olds who have never seen any Star Trek but Abrams's Star Trek will probably adore Into Darkness as the first great sci-fi blockbuster of the summer, and I'm sure there will even be plenty of old-school Trek fans who will applaud the way Abrams packs Into Darkness with alternate-reality versions of certain tropes, elements, and characters from the classic stories.

For me, however, it increasingly felt less like a re-imagining of the franchise, and more like a regurgitation, ultimately begging a single key question: At what point does nostalgia cross the line and become necrophilia?

The first rebooting of the franchise, 2009's Star Trek, was far more enjoyable than many of us expected it to be. Abrams (and screenwriters Roberto Orci and Alex Kurtzman) cleverly found a way to take a fresh, updated approach to this world and these characters while still weaving it loosely into the tapestry of the original's continuity. More dependent on elaborate action set pieces than diplomacy and ethical dilemmas, Abrams's film never quite felt like it captured the spirit of Gene Roddenberry's idealized vision of the future, but that was okay: by making this a divergent timeline spinning off the axis of the one we know so well, Star Trek managed to both respect the past and clear the way for entirely new stories that were not beholden to what had come before.

But the squandering of that clean slate is exactly what is wrong with Star Trek Into Darkness: given the opportunity to go forward and tell new stories, Abrams and the writers (now including his long-time collaborator Damon Lindelof) spend all of their time in this sequel looking backwards. Into Darkness is packed to the gills with recycled elements of earlier Star Trek, now just blown up to be louder, more elaborate, and more expensive. The occasional wink at the audience is one thing, but after a while I just wanted to scream at the screen: We get it, you like the old series too. Now fucking get on with it and show me you have new stories to tell. 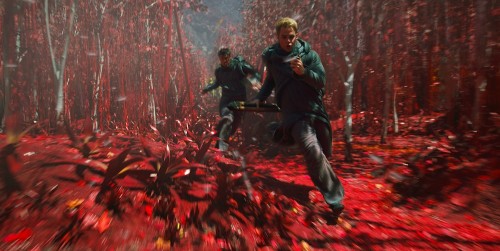 But Abrams and the writers can't seem, yet, to see past the earlier stories; they can't even see past their own earlier story. Into Darkness opens, charmingly enough, with a prologue in which Kirk (Chris Pine) and his crew are doing plausibly Star Trek-y things: conducting a humanitarian mission on an endangered planet, while trying not to be detected by the pre-industrial natives. This sequence feels like what a rejuvenated Star Trek should be: it presents a classic dilemma (attempting—and, of course, failing—to uphold the Prime Directive of non-interference), but executed with a snappier, more exciting pace and some thrilling visuals that we haven't seen before.

But no sooner is this mission over than we are back in the conflict of the first movie: with Kirk being stripped of his command for recklessness and lack of judgement by Admiral Pike (Bruce Greenwood). Abrams's Star Trek spent all of its considerable running time dealing with this issue, and it took until the final scene to get Kirk in his familiar yellow jersey with his ass officially planted where it belongs, in the Captain's chair. Fifteen minutes into this film, he's kicked out of it again, and we can't help but feel like this is well-covered territory. (Could we not have gotten one film in which Kirk was just the goddamned captain of the U.S.S. Enterprise?)

Soon, however, Kirk and his crew are drawn back into the fray by a new threat in the form of terrorist John Harrison (Benedict Cumberbatch), a former Starfleet operative who has declared war on the Federation for unknown reasons. After a particularly devastating attack, the Enterprise is sent across the galaxy in pursuit of Harrison by another Starfleet bigwig, Admiral Marcus (Peter Weller), with ethically questionable orders to kill Harrison from orbit without ever engaging with him face-to-face. (The parallel to the way America fights real-life wars is both intended and, ultimately, inconsequential.) 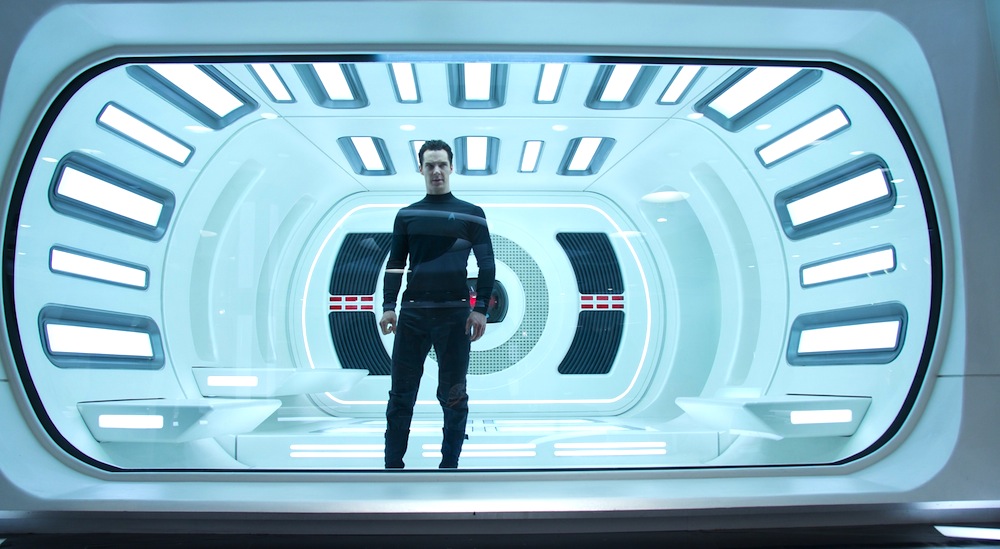 I'm not going to discuss the plot any further, but it's tricky to avoid since the plot is the problem. Suffice to say, anyone with a passing familiarity with earlier Star Trek will start to realize where all of this is heading, and see that we are getting a retelling of an earlier tale. And for a while even that is okay: as long as the material feels new, the way Abrams and company keep pushing those nostalgic buttons is exciting and rewarding, and the many action-heavy set pieces along the way are genuinely thrilling. They do begin to feel like different levels in a platforming video game—the "fight on top of flying trolley cars" sequence, the "run through a spinning ship before it crashes" sequence, etc.—but they are well-executed and a lot of fun.

Enjoyable, too, is the work by the cast, who have captured enough of the cadences and mannerisms of the original actors but have managed to make the characters their own. The key relationship is between Kirk and Spock (Zachary Quinto), of course, but the film finds room to give several of the other crew members (particularly Zoe Saldana's Uhura) something to do. (My only complaint is the relatively sidelined position offered to Karl Urban's Dr. McCoy: even better than Quinto's admirable grasp of Spock, Urban's McCoy is pitch perfect, but the franchise hasn't figured out yet how to make him the essential third lead—a mediator between the other two—that he was in the classic series.) Abrams also partially corrects a serious gender imbalance in the original crew by introducing Alice Eve as a new science officer and weapons expert. (Anything more I said about this character would take us into spoiler territory, so I'll just include the tasteful promotional pic of her instead.)

Best of all, of course, is Benedict Cumberbatch as the opponent of the piece. If the 2009 Star Trek had a fault it was that Eric Bana's Romulan made a bland and murky villain, but that's not a problem Into Darkness faces. Cumberbatch, so reliably brilliant in the BBC's updated version of Sherlock, is getting a lot of work these days—you'll hear him as the voice of Smaug the Dragon in the next Hobbit movie this winter—and there's a reason he's in such demand. He is excellent here, dripping venom and menace where necessary but also capturing the necessary complexity and ambiguity of a character who may be more than he appears to be.

So Star Trek Into Darkness has a lot to recommend it, and—viewed with the lowered-expectations of a summer popcorn movie—its a breathless couple of hours that delivers most of what we hope for from a sci-fi action flick. It ultimately disappoints, however, by revealing in its second half that it has nothing new to say and nothing new to bring to the table. It is bad enough that the winks at the audience come more frequently and become more labored, but once Abrams and crew start recycling actual scenes from earlier movies, Star Trek Into Darkness starts to feel like a pastiched remake, not a clever homage. What's worse, one such scene—now twisted in a way the filmmakers undoubtedly think is clever—is a such a powerful, iconic moment in Star Trek history that it feels cheapened here: neither this franchise nor these new incarnations of the characters have earned the emotional impact they're reaching for here. However nicely they've stepped into the roles, we haven't been living with these characters for thirty years, and so trying to cash in on our long investment this way seems cynical and insulting to the long-time viewers, and is unlikely to mean much to the newcomers.

To make a hypothetical comparison—one that could become less hypothetical, given the fact that Abrams has accepted responsibility for that franchise as well—what do we want from the next Star Wars movie? Do we want an updated retelling of the basic plot of The Empire Strikes Back with new actors and some clever twists—Leia gets frozen in Carbonite instead of Han!—or do we want a whole new story that furthers the characters and expands the possibilities of that universe? The legacy of Gene Roddenberry's optimistic vision of the future should be that there are always strange new worlds to explore, new life and new civilizations to discover. Instead, in Star Trek Into Darkness, Abrams has competently, but disappointingly, gone where all of us have gone before.