Okay, let me say at the start: this isn't going to be pleasant for any of us. I really don't enjoy being this guy: just as there's nothing I love more than analyzing and raving about (at obscene length) an episode of Doctor Who that rises to the considerable heights of which this show is capable, there is nothing I hate more than trying to squeeze out even a few hundred words about the infrequent and unfortunate lows.

And, make no mistake, "The Crimson Horror," written by Mark Gatiss, is a low. It may be a new low. It nobly and impressively puts all my previous least favorite episodes of the new series in perspective, so that they somehow don't seem quite so low as they did before. I would rather watch Gatiss's last lackluster effort, "Cold War" again. I would rather watch his "Victory of the Daleks" again. I would rather revisit some of my own personal nadirs like "Curse of the Black Spot," "The Doctor's Daughter," or "Fear Her" again. (Okay, maybe not "Fear Her"—those final ten minutes are really unforgivable.)

But you take my point. This was painful. This was Scooby Who. This was an episode of a show that, if it were always like this, I wouldn't even watch. 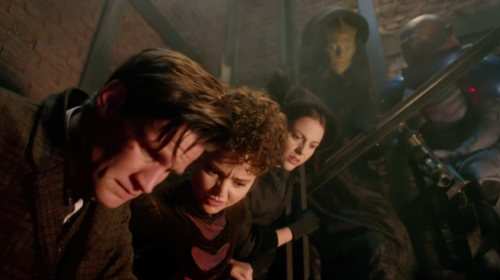 And perhaps that's just what it is. "The Crimson Horror" feels like a backdoor pilot for another program, one pitched to a younger audience: a jokey, silly show about lizard detective Madame Vastra (Neve McIntosh), her ass-kicking wife Jenny (Catrin Stewart), and their loyal and bumbling sidekick Strax (Dan Starkey). Don't get me wrong, I like these characters, and I'm happy to see more of them in Doctor Who. (I liked their last appearance, "The Snowmen," and their first appearance, "A Good Man Goes to War," is one of my all-time favorites.) And, since the tragic death of Liz Sladen in 2011 brought The Sarah Jane Adventures to an end, the BBC has not had a spin-off show designed solely for younger viewers, so I'd be thrilled to see these characters star in that show. I would support that show. I would applaud that show's existence. I just would not, necessarily, watch that show—or at least no more often than I watched The Sarah Jane Adventures. There was nothing wrong with it: it just wasn't meant for me.

But if Doctor Who were always like "The Crimson Horror"—and I very much fear it will be, if heir apparent Mark Gatiss becomes the next showrunner—I'd be forced to finally admit that this show isn't for me, either. None of the qualities I expect from Doctor Who were present this week: there was no wit, no cleverness, and no emotional depth. Instead, we have a ridiculously nonsensical runaround in which evil moralist Winifred Gillyflower (Dame Diana Rigg) is in a symbiotic relationship with an aborted crawdad who schemes to unleash a prehistoric parasite on 19th century Yorkshire. 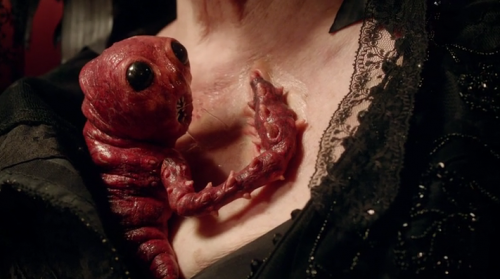 With good episodes, I'm always willing to overlook inconsistencies and plot holes, but I'll fully admit that bad episodes bring out the nitpicky pedant in me. It's not my best side, but, if you'll bear with me, let's look at this story a bit.

So, the basic evil scheme is this: Carrie Nation Gillyflower and her embryonic overlord plan to wipe out humanity. (You know, just because.) But first she goes around preaching the dangers of sin, sets up a fake match factory and a faux community called Sweetville, and implements an elaborate screening process for residents in which only the good-looking and fit need apply. (Because…umm…well, I'm not really sure why they had to be good-looking, or just exactly what all these pretty people were supposed to do after the poison apocalypse.)

The poison—the titular "crimson horror"—is so fatal in microscopic doses that a five gallon jug of it exploded into the atmosphere will wipe out all life on the planet, but fully immersing human beings in a gigantic vat of the shit puts them into a harmless state of stasis in which they can be preserved in prim dioramas under glass. (Because that makes sense.) Of course, it turns out that, if you're a time lord, being fully immersed in the deadly microscopic poison doesn't kill you or put you into stasis, but just gives you a really bad sunburn, and makes you moan and walk around stiffly as if…well, as if you have a really bad sunburn. (Sure, why not?) Fortunately, Gillyflower's blind daughter Ada (Rachael Stirling), who's lonely (or something) decides to keep Lobster Doctor locked in a cell as her pet monster. (Who wouldn't?) Even more fortunately, the random guy who asked the Doctor and Clara to look into this mystery in the first place shows up (why?), gets infected (how?), and lives just long enough (why?) to stumble into the Doctor's cell (wait, wasn't it locked?), so he can snap a photo of the Doctor on his dying eyeball.

That's a thing that happens, you see…because of the poison. (What the fuck?)

(This all takes place in a conveniently sketchy sepia flashback, so the question of how the Doctor gets so easily incapacitated is kind of skipped right over. I mean, Daleks and Cybermen and planet-sized gods are one thing, but the man is absolutely helpless before catty old ladies and Victorian corset models.) 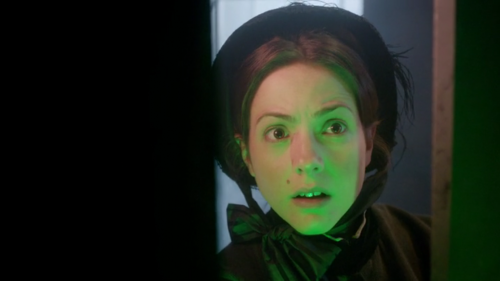 THEN, random guy's random brother—who faints a lot (groan)—enlists the help of Madame Vastra, who sends in Jenny to investigate. Jenny, discovering a locked door with a horrible moaning monster behind it, instantly knows that the right thing to do is to open it. (Huh?) She discovers the Doctor, and luckily Ada—who is blind, let us not forget—not only knew which clothes were his but also happened to have brought them to the cell, with his sonic screwdriver in the pocket. (Thoughtful of her, wasn't it?) The Doctor, naturally, has a setting on his sonic screwdriver that instantly cures Evil Lobster Sunburn, so that's okay…though it does beg the question of why he didn't do this earlier when HE'S BEEN TWO FEET FROM HIS SONIC SCREWDRIVER THE ENTIRE TIME. (Don't tell me I'm being overly pedantic unless you're willing to draw me a diagram of the Doctor's chains that shows how he had enough slack to shove his arm two feet out of the bottom of the door to his cell, but still couldn't reach the screwdriver in the pile of clothes at his feet…)

Sigh. I'm going to stop with this now, because I don't enjoy this sort of minor griping any more than you do, but I could go on for pages. Like I said, I'm not usually one to complain about logic and plot holes, but I honestly believe this is one of the worst scripts ever produced for Doctor Who. It feels like it was cobbled together half-assedly by someone with no respect for the audience at all, someone who said, "Oh, it doesn't have to make sense, it's Doctor Who." This show often requires a willing suspension of disbelief, and I've almost always suspended mine willingly, but I am decidedly unwilling to suspend the oxygen flow to my brain long enough for me to even follow this story, let alone enjoy it.

And here's the thing: I wouldn't have even noticed the plot problems if there was an ounce of anything else to redeem this episode—but there wasn't. I actually enjoyed, for example, Gatiss's episode "Night Terrors" from last season: that plot had some serious problems as well, but there was some cleverness in its execution and some real emotional depth at its core. I enjoyed his "Victory of the Daleks" less, but even that had a few powerful moments from Matt Smith and an emotionally rich understanding of the relationship between the Doctor and his companions. None of this is to be found in "The Crimson Horror," an episode that appears to have no coherent ideas, no purpose whatsoever, and no characterization that is recognizable, let alone insightful. (Since when does the Doctor have so little regard for life that he allows Strax to shoot running around shooting people, and makes a joke when Ada crushes the alien symbiote like a cockroach?)

And I might not have noticed the plot, or the characterization, or the lack of emotional weight, if the episode was fun—but it wasn't that either. Yes, I enjoy Vastra, Jenny, and Strax. (Though, considering that the episode was designed to feature them, they actually had surprisingly little to do: once the Doctor was freed, they just became superfluous elements in an already crowded story.) Yes, I enjoyed the Doctor's snarky reference to (Fifth Doctor companion) Tegan—“I once spent a helluva long time trying to get a gobby Australian to Heathrow Airport”—and I found it mildly amusing to see Jenny in her Emma Peel-like leather catsuit in an episode that featured Diana Rigg. The always wonderful Rigg and her real life daughter Stirling give fine performances—so fine, in fact, that I deeply regret seeing them wasted on an episode as bad as this one. 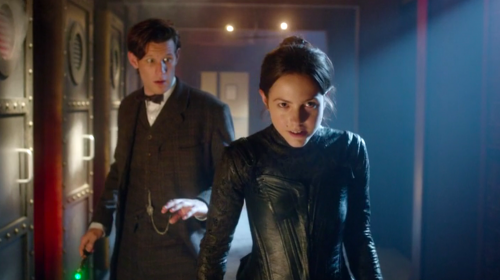 But none of the positive factors compensated for the incoherent plotting, phoned-in characterization, and some truly appalling attempts at humor. The low point was probably the street urchin named "Thomas Thomas" who just happens to give accurate turn-by-turn directions—TomTom, for the uninitiated, is a company that makes GPS devices—but the more damning example of what Gatiss thinks kids will laugh at was the guy who kept fainting at everything: that sort of cheap, bargain-basement sit-com humor has peppered most of his scripts, and it's a dire predictor of what we can expect if he ever gets his creative hands on this show.

Look, as I said when I began, I don't like being this guy, and I'm well aware that everyone has his or her own tolerance for different kinds of nonsense. Ask any 100 Doctor Who fans to name the worst episode ever, and you'll almost certainly get at least 50 different answers. (The 2006 episode "Love and Monsters" is a common answer to that question, and I happen to harbor a weird affection for that particular ugly duckling.) Just this season, opinions have varied wildly: I've been in the tiny minority both in liking "The Rings of Akhaten" and in detesting "Cold War."

So, obviously, these things are subjective. But ask me to name my "worst episode ever," and my answer today might just be different from the one I'd have given you yesterday.