When I wrote up the two-part season premiere, I mentioned that it was going to be a problem for me to keep up with my Mad Men reviews this year, and that is turning out to be the case. (If I could learn to write short, pithy, off-the-cuff reviews, I might comfortably cover three shows a week, but short-and-pithy has never been my forte.) Now, two episodes behind—with a third barreling down on me this evening—I'm forced to consolidate a bit, or else admit that my Mad Men reviews just aren't going to happen this year.

But that's okay, because—as I discovered last season, when I often ended up doubling-up on episodes for the same reason—this show lends itself pretty well to a longer view and a slower pace. More than any show I can think of, Mad Men is novelistic in its structure: important things happen each week, of course, and subplots are born and die over the span of a few episodes, but Matthew Weiner's basic narrative unit is the season, not the episode, and the complete shape of this story won't be visible until the entire series is complete, at the end of Season Seven.

All of which is to say—in a transparent bit of self-justification, and a fairly transparent plea for patience—I'll check in with Mad Men as often as I can this season, and there may even be a benefit to considering episodes two or three at a time.

These two episodes, conveniently, help prove my case. "The Collaborators" largely focuses on interpersonal relationships—primarily those of two married couples, the Drapers and the Campbells—while "To Have and To Hold" is more concerned with business dealings. But they are really just two sides of the same coin, both dealing with different facets of one of Mad Men's central themes: the peculiarly American trait of never being satisfied with what we have. As we've seen time and time again on this show, a bird in the hand never seems as valuable as those two in the bush, or—to mix my parables—the bone that dog in the pond has in its mouth looks bigger and juicier than the one we have clenched in our own teeth. 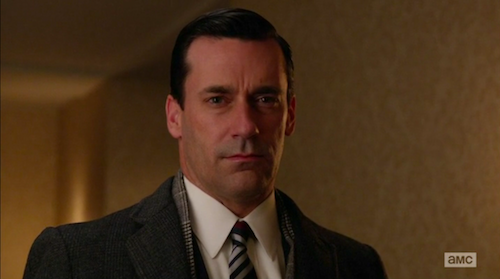 Don (Jon Hamm), of course, has always had this problem: the single defining characteristic of his life—going all the way back to his reckless decision to abandon Dick Whitman—is that he can't resist an opportunity to sacrifice the life he has for the life he doesn't. At the end of Season Four, Meghan (Jessica Paré) was everything he could possibly want, and he spent all of Season Five genuinely trying to be satisfied with her and their life together. It worked, for a little while, but—as he said last season—happiness is just a moment before you need more happiness.

“Because even though success is a reality, its effects are temporary. You get hungry, even though you’ve just eaten…You’re happy with 50 percent? You’re on top, and you don’t have enough. You’re happy because you’re successful, for now. But what is happiness? It’s a moment before you need more happiness. I won’t settle for 50 percent of anything. I want 100 percent. You’re happy with your agency? You’re not happy with anything. You don’t want most of it, you want all of it, and I won’t stop until you get it.”

He was happy, for a while, when he had 100 percent of Meghan's attention, at home and in the office. But when Meghan stopped existing solely as a perfect complement to his own life, and started focusing on pursuing her own, Don started growing restless.

It's not that Don wants one thing instead of another: he just wants everything. That's why he thinks nothing of shuttling back and forth on the elevator between his two lovers, Meghan and Silvia (Linda Cardellini), enjoys his friendship with Silvia's husband Arnold (Brian Markinson), and doesn't feel the least bit uncomfortable when the two couples all socialize together. ("They're both good company," he says to Silvia, of their spouses.) Silvia—wracked with Catholic guilt—is having more trouble with the situation (especially when she finds out Meghan has had a miscarriage), but we find out at the end of "To Have and To Hold" that what she prays for is for Don to find some peace—which will never, ever happen.

"The Collaborators" makes the comparison between Don and his Uncle Mack (Morgan Rusler). As we learned last season, young Dick Whitman (Brandon Killham) grew up in a whorehouse, and Uncle Mack was the "rooster" of that farm, "humping all the hens" (including Dick's aunt and mother). But the end of that episode finds Don exhausted outside his own door, feeling like he's the whore. Over the closing credits, we hear Louis Prima's version of "Just a Gigolo."

There will come a day, when youth will pass away,
What will they say about me?
When the end comes I know, there was just a gigolo,
Life goes on without me.

The music cue may be a little on-the-nose, but the part that speaks most poignantly is not the obvious reference to Don's whoring lifestyle, but the "life goes on without me" line: Meghan's miscarriage, and the fact that she considered aborting the baby anyway, is a reminder of how they both so obsessed with the life they could have that they're making sacrifices of possible happiness in the life they're living.

As I said, this theme is fundamental to Mad Men, so it's no surprise to find it carrying over through both of these episodes, but the way "The Collaborators" and "To Have and To Hold" speak to each other is interesting in other ways. In the first episode, for example, we get flashbacks to the whorehouse, and little Dick Whitman peeking on the whores at their work. "You're a dirty little spy," one of the whores tells him. In "To Have and To Hold," Don goes to the soap opera set where Meghan is performing her first steamy love scene. "You like to watch?" asks Arlene (Joanna Going), the open-minded wife of the soap's head writer. Despite the fact that Don is actually cheating on Meghan, he accuses her of being a whore—just for doing a love scene as part of her job. ("I don't understand why you would do that to yourself," she says, of his coming to watch the scene—but Don can't help looking through the keyhole.)

And of course, the business-related sub-plot of these episodes is also on theme: Sterling Cooper Draper Pryce fought for, and won, the Heinz baked beans account last season, when they were down on their luck, but now they want the big one: ketchup. Ketchup is the other woman, the one they're willing to cheat with precisely because she's unavailable: the sexual parallels are not even subtle. "I'd rather retire than watch that guy screw my girlfriend," beans executive Raymond (John Sloman) says of Tim, the ketchup guy. Tim, in his turn, comes to town for secret meetings with ad agencies (in Pete's love pad), and to enjoy a rendezvous with his mistress (sleazily removing his wedding band as he leaves the meeting).

"Sometimes you gotta dance with the one that brung ya," Don says, at first, trying to be faithful to Raymond, the loyal but unexciting client—but of course, he ultimately can't resist the lure of the younger, flashier Tim. Putting together the ketchup pitch is conducted exactly like an affair, hush-hush and behind closed doors, for fear of being caught. When they finally arrange the pitch itself—the seduction—it's held in a hotel room, not an office. 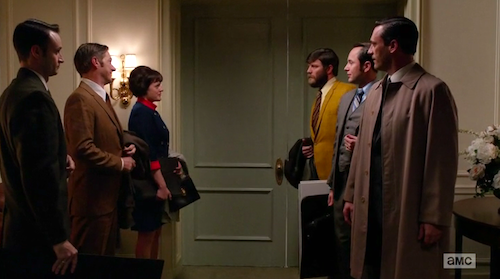 But it turns out that Tim is something of a business whore too; just like johns leaving a hooker, the boys from Sterling Cooper Draper Pryce have no sooner finished their business than they run into Tim's next appointment, the folks from Cutler Gleason and Chaough. Peggy—having learned about ketchup's availability from her "friend" Stan (Jay R. Ferguson)—has swooped in to seduce the client out from under them. (Like Don, she barely hesitates to take something she wants from a friend.)

The respective pitches, too, are illustrative of the theme: what Don and his team have come up with is to not show the product: to present photos of food without ketchup, to create a desire for ketchup. "It's tantalizingly incomplete," he explains to the dubious ketchup execs. For this is how Don thinks: there is nothing more attractive than something you can't have. If you can get inside that space in the consumer's head, he says, "your ad can run all day."

But Peggy and Teddy Chaough (Kevin Rahm) steal the account out from under them by showing what Heinz is, not what it's not: "Heinz: the only ketchup." They celebrate the thing itself, not the longing for the thing, or the absence of the thing. Don loses what he had—the loyal, if unexciting Raymond—because he couldn't resist the lure of the more exciting prospect, and he loses that because he doesn't know how to appreciate something: he only knows how to want.