Perhaps you haven’t noticed, but I really do very little reviewing in my “TV reviews”—at least of the shows I cover regularly. I’m not interested in assigning grades, and I presume that if you’re reading these posts you’ve already seen the episode in question, so you don’t need me to recommend it. I wouldn’t watch these shows—let alone spend hours writing about them—if I didn’t assume a basic, baseline level of quality that can usually go unremarked. So, in general, I’m much more interested in discussing the episodes than reviewing them. If I find myself reviewing an episode, it usually means something has gone terribly, terribly wrong.

So, with apologies to all concerned, welcome to my review of “Cold War.”

I have great respect for Mark Gatiss—who is a good writer on Sherlock and an excellent Mycroft Holmes—but dear lord, do I dislike his approach to Doctor Who. A few of the episodes he’s written have been passable (“The Unquiet Dead” and “Night Terrors”), and a few more were fairly ghastly (“The Idiot’s Lantern” and “Victory of the Daleks”)—but what they’ve all been is utterly forgettable. They all feel as if they’d been dropped into their respective seasons, and as if they could be pulled out just as easily, without losing much of anything. None of them has any larger meaning or emotional importance: it’s as if Gatiss has a drawer full of generic, formulaic Doctor Who scenarios he can brush off whenever Steven Moffat has a hole in a season. (Honestly: if you put the Ninth Doctor and Rose in “Victory of the Daleks,” or Eleven and Amy in “The Idiot’s Lantern,” would it make one bit of difference? And isn’t that a problem?) Under Gatiss’s pen, Doctor Who becomes what people who don’t really watch Doctor Who imagine it to be: a silly sci-fi romp. It becomes a monster-of-the-week show. It becomes Scooby Who.

Some of this is showrunner Steven Moffat’s fault, of course, but that doesn’t make me like Gatiss’s episodes any better, and it doesn’t make me happier about a dead spot in the season like “Cold War.” I come to Doctor Who for any number of things: original ideas, clever storytelling, emotional resonance, thrilling adventure, quirky comedy, etc. A great hour of Doctor Who has many of these things at once, while a decent hour of Doctor Who may only reward the viewer with one or two of these elements to enjoy. To make me really dislike an episode, however, you have to leave ALL these things out, and that’s what happened here. (To find an episode that left me as cold as this one did—no pun intended—you'll have to go back to "The Curse of the Black Spot." Maybe it's something about boats…) 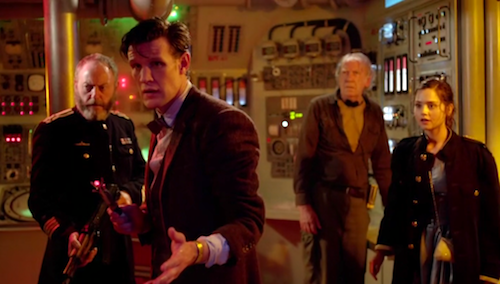 "Cold War" aspires to be a classic Doctor Who "base-under-siege" story. Unfortunately, it doesn't aspire to be anything more than that, and it doesn't even execute that modest goal particularly well. In the distant year of 1983—the era of big hair, big shoulder pads, and big nukes—a Soviet nuclear submarine commanded by Davos Seaworth (Liam Cunningham) has recovered something they think is a frozen mammoth in a block of ice while drilling in the Arctic.

(Sure, because—as we'll no doubt learn once all the cold war intelligence files have been declassified—all Soviet nuclear submarine crews spent the 1980s drilling for mammoth carcasses and fighting polar bears with electric cattle prods…) 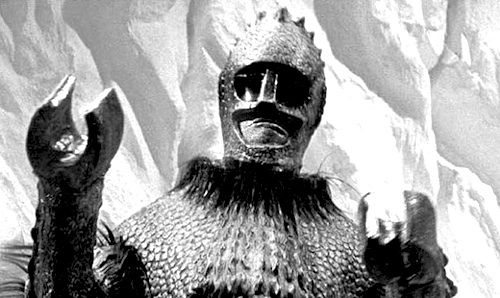 Weirdly, however, the humanoid-shaped shadow in the ice turns out not to be a wooly mammoth after all, and is in fact Skaldak, a legendary grand marshal of the Martian Ice Warriors. Look, I'm as pleased as anyone to see the return of the classic era creatures the Ice Warriors, and I can even appreciate how Moffat, Gatiss, and the production team tried to maintain the iconic look of these monsters and update them for the 21st century by giving us, for the first time, a look at the creature inside an Ice Warrior's armor. But it turned out Gatiss didn't really want the Ice Warriors at all, except for name recognition and fan-wank: what Gatiss wanted was to do Alien on a submarine. To realize this staggeringly unoriginal vision, we discover that the huge, lumbering Ice Warriors are actually illogically spindly and stealthy CGI creatures that can slither really fast and crawl through the walls. 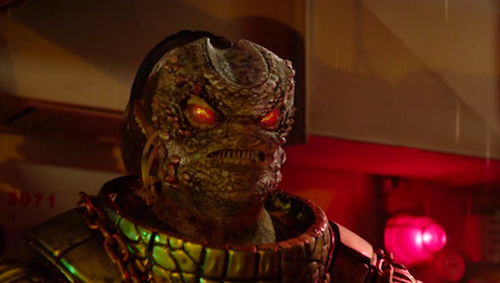 And you know, even that wouldn't bother me if the story was any good—but it isn't. Despite some fine production design, and despite the presence of excellent character actors Cunningham and David Warner, this thing is an almost total misfire. There's just no point to any of it, and very little reward: the Season One episode "Dalek," by Robert Shearman, re-introduced a classic monster in much the same way, by doing a base-under-siege story with one individual Dalek who was (apparently) the last survivor of its race. The difference is, that episode had a reason to exist: the siege itself was exciting and scary, and—more importantly—Shearman had something to say. "Dalek" found genuine emotional depth in its story about these two lone survivors of the Time War, and used that opportunity to do some real character work, strengthening our understanding of the Doctor, Rose, and their relationship with one another.

Alas, "Cold War" pays no such dividends. Clara (Jenna-Louise Coleman) has a few nice moments: I am enjoying Coleman's performance, and both Clara's tentative, eager-to-please bravery (in volunteering for hazardous duty) and her moment of realization about the stakes of what she's gotten herself into (“It all got very real”) were well-played.  And it was a nice touch that she actually stayed put and didn't argue when the Doctor told her to stay put and not argue, setting herself apart from nearly every companion in the 50-year history of the show. 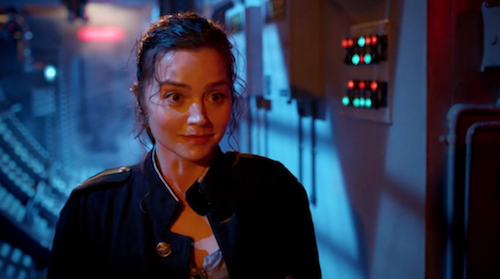 But that's the extent of the nice things I have to say about this episode, which featured some tepid and derivative "suspense" sequences, an unsatisfying (and all too familiar) resolution, and some fairly dire, Power Rangers-worthy dialogue. ("My world is dead, but now there will be a second red planet: red with the blood of humanity!" Seriously?) The "humor" throughout fell flat for me: the Doctor's lines were uninspired, and the jokey "can you give us a lift" ending felt like it should have frozen the frame on everyone laughing, like an early '80s sit-com.

I could say more, but there's no point dwelling: the nice thing about this show is that a completely different episode is always right around the corner. (Next week's looks like a spooky winner, doesn't it?) So let's move on: fortunately, that will be easy, since an episode like "Cold War" is so easily and completely forgettable.