THE HOBBIT: AN UNEXPECTED JOURNEY (2012)

If you're wondering which one I saw, it was the high-frame-rate, 3D, 35mm version.

If you're wondering which one you should see, my recommendation (which I know you'll ignore) is that you don't.

Endless, soulless, and joyless, The Hobbit: An Unexpected Journey is a crushing bore of epic proportions. For the record, I would describe Peter Jackson's previous adaptations of the Lord of the Rings trilogy in much the same way—so those of you passionately in love with the franchise should feel free to stop reading now—but I was cautiously optimistic about The Hobbit. As a child, I was the kid who found J.R.R. Tolkien's first, shortest book a charming adventure yarn with humor and heart, and then grew quickly bored when I moved on to the fatter, slower, darker, more obsessively detailed LOTR trilogy. I respect the world-building—Tolkien, for better or worse, basically invented the fantasy genre as we've come to know it—but I found (and still find) the writing turgid, the plotting plodding, and the characterization practically nonexistent.

I thought Jackson's faithful-to-a-fault trilogy not only carried over these same problems, but exacerbated them: overlong, overcrowded, and overly obsessed with computer-generated spectacle, those films were, to me, a 10-hour assault on the eyes, ears, and ass that never once appealed to the heart. I'm well aware this is a minority opinion, but I found them uninteresting, unengaging, and very nearly unwatchable.

But at least there was an excuse for the absurd length and excessive crowding of the LOTR movies: it's fair enough to turn three long, packed books into three long, packed movies, and the fact that I found the movies every bit as stupefying and stultifying as the books could be seen as an argument in their favor. Whatever else they were, they were faithful adaptations of the source material, and I'm more than willing to accept that Peter Jackson gave the Tolkien fanatics—among whom I don't happen to count myself—exactly what they wanted.

Jackson's decision to pad and stretch The Hobbit into an eight- or nine-hour trilogy, on the other hand, is inexcusable and disastrous. Published 17 years before the first volume of Lord of the Rings, The Hobbit is a relatively brisk and lighter-toned adventure yarn about Bilbo Baggins, a comfort-loving hobbit recruited by the wizard Gandalf to join 13 dwarves in a quest to regain their mountain homeland. Along the way, this mismatched band of adventurers encounter orcs, goblins, trolls, wolves, and giant spiders; they ally themselves with elves and humans and giant eagles, fight a dragon called Smaug, and take part in a climactic battle for the fate of the realm. It all moves along at a breakneck pace, and it all gets satisfactorily wrapped up in about 350 pages.

But Jackson's An Unexpected Journey takes a soul-crushing 167 minutes to get us less than a third of the way through Tolkien's story, and it seems much longer. Padding out the material from The Hobbit with unnecessary subplots and extraneous characters from other Tolkien miscellany, and dragging each setpiece out into a chaotic 20-minute roller coaster ride, An Unexpected Journey is a frenzied perpetual motion machine: it never stops moving, but it never seems to get anywhere. Every encounter in this slogging road movie has the same structure: the travellers stumble upon enemies, have a long fight scene with computer-generated monsters until all hope appears lost, and then are saved by a deus ex machina. All of these scenes have the same weight, with no alteration in style, no shifting of tone, no variation in cinematic approach or emotional stakes. Worse, there is no narrative progression: every encounter is an accident, resolved by a gimmick, and none of them mean much of anything to the story.

Some of these are faults, of course, to lay at Tolkien's feet, not Jackson's, but Tolkien at least knew not to dwell on any one battle so long that we'd be sick to death of battles long before the next one came along. And Jackson—who shares screenwriting credit with Fran Walsh, Philippa Boyens, and Guillermo del Toro—does not use his excessive, self-indulgent running time to make us care about any of this: with 167 minutes at his disposal, it is baffling that he did not spare a few to try and develop some of his 15 main characters in any meaningful way. Martin Freeman—an amiable everyman—is smart casting for Bilbo, but he is given too little to do and becomes nearly lost in the throng. Far from expanding on the finicky, hero-in-sheep's clothing that Tolkien created, An Unexpected Journey doesn't even do him justice: the character is far more three-dimensional on the page than he is in the movie.

As for the other characters, forget about it: they barely have personalities, let alone arcs. After the 17 hours (or whatever) that the great Ian McKellen has spent playing Gandalf, he can do this character in his sleep—and he more or less does here. Of the dwarves, they are so indistinguishable that the only one I could even name is Thorin Oakenshield (Richard Armitage), the grumpy leader: I tended to think of the others as the Old One, the One With the Stupid Hat, or the One With the Particularly Bulbous and Phony-Looking Nose. (It does not help that some of the dwarves look fairly normal, while others have such heavy prosthetics that they look like they just stepped off Fraggle Rock.)

There is exactly one scene that feels as though it belongs in a movie and not in a video game, and that is the game of riddles Bilbo plays with the subterranean wretch Gollum. Masterfully realized by motion-capture actor Andy Serkis, Gollum is arguably Tolkien's greatest creation, and he is the only character in the film with any real pathos: insane, repellent, but oddly sympathetic, this character makes us engage emotionally with the film in a way that nothing else does. He was the best reason to watch the Lord of the Rings movies, and he's the best reason to watch The Hobbit: An Unexpected Journey as well. This iconic scene takes place in the middle of a larger battle—while the dwarves battle hundreds of computer-generated goblins above—and it is a quiet, blessed reprieve: smartly written and well-constructed, this battle of wits actually has a shape, and a purpose, and real stakes: as such, it stands in stark contrast to the assaultive, ultimately pointless chaos that represents the rest of the film. (Sadly, it doesn't come until about two hours into the movie, and it's not quite worth the wait.) 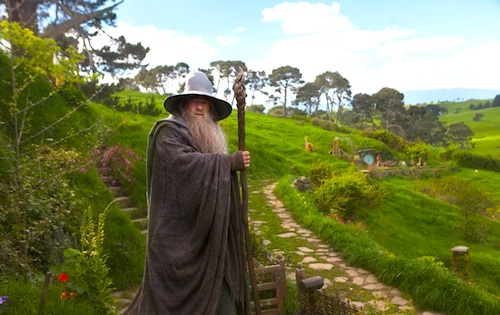 I hope I've made it clear that I would have hated The Hobbit: An Unexpected Journey under any conditions, but I can't leave without saying something about the technology. As I said when I began, I saw the film in 48 frames-per-second, a new high-definition technique that essentially provides the eye twice as much visual information as traditional 24 fps films. The result is a startlingly clear, crisp image—much like high-definition television—which, in part,  is supposed to compensate for some of the motion blurring that occurs with 3D. (And it does: while the 3D added virtually nothing to my enjoyment of The Hobbit, I must admit it was remarkably clear and unobtrusive.) Unfortunately, the 48 fps also has the effect of making everything look incredibly fake, less like a film and more like the behind-the-scenes footage you'd get on a DVD extra. (It is appropriate that the great Sylvester McCoy is on hand as the wizard Radagast, because, to me, this "cutting edge" technology makes An Unexpected Journey look like nothing so much as the studio-bound episodes of Doctor Who shot on videotape in the 70s and 80s.)

Peter Jackson thinks high-frame-rate productions are the future, and he may be right: it's far too early to say this technology won't eventually be perfected and find its artistic purpose. I'd actually be interested to see it used on a world that was largely realistic, but the decision to use it on this fantasy world was an unqualified disaster: every computer-generated image looks that much more false, every prop looks that much more like plastic, every prosthetic nose looks that much more ridiculous. Worse, the entire aesthetic is compromised: action looks choppy, backgrounds look flat, and everything looks too shiny and brightly lit. Intended to be more immersive, it actually has the opposite effect: it turns out that, in seeing everything clearly, you see too much.

Most movie goers will see The Hobbit: An Unexpected Journey in traditional 24 fps, and so will not be removed from the story in quite the same way I was. (If you're going to see it—and I'm sure you are—I highly recommend avoiding the high-frame-rate showings.) But Jackson's embrace of this technology strikes me as significant, and, in its own way, perfectly illustrative of the problems I have with The Hobbit and most of his films. For what the HFR technology gives us is more: more frames per second, more visual information, more clarity. In a traditional 24 fps film, we are shown 24 static pictures per second, and our brain weaves them together into a fluid motion picture. What HFR accomplishes is, literally, to cut in half the job our brains have to do when we watch a movie: it does more of the work for us.

How appropriate that Peter Jackson is the first filmmaker to embrace this technology, because he is clearly a filmmaker for whom more is more, one determined to cram as much as possible into every film, leaving little or nothing to the imagination. Every battle must be epic, every setpiece must be elaborate, every event Tolkien refers to in passing must be realized on screen in maximum detail. This overall approach has, for me, much the same counter-productive effect as the 48 frames per second: to assault my senses with too much information, and never provide me any space to engage in the story, or the characters, myself. Personally, I could use considerably less from Jackson's long, overly literal Middle Earth movies: I would welcome a longer pause between images, a slower pace, a little more empty space that I was invited to fill in with my own imagination. Longer is not always better, fast is not always preferable to slow, and chaos becomes meaningless without some periods of calm in between. Sometimes, a single line of dialogue can provide exposition better than a visual history lesson. Sometimes, pausing to register an emotion on a face can serve a character's back story better than 20 minutes of flashback. Sometimes, less is more.