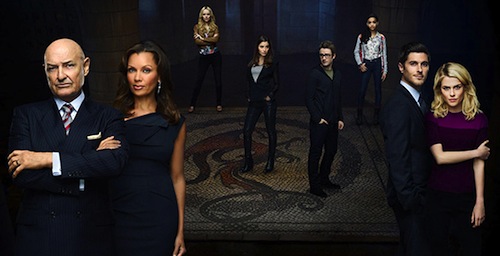 In “First Look/Last Look,” I’m doing quick and dirty reviews of a few TV pilots. While I hope this experiment yields at least one show that I will want to add to my regular viewing—if not reviewing—schedule, I’m not holding my breath. Call me pessimistic, but, in most cases, I expect my first look to also be my last.

Last season, I spent 12 glorious weeks reviewing American Horror Story, the messy, misogynistic, stunningly bugshit FX series about the most severely evil house in America, and the several dozen people (alive, dead, and dumb) who lived there. "Stupidly pretentious, embarrassingly unrestrained, and chaotically unfocused," I wrote, "this is a basic cable Hell for good actors who have made bad choices."

It was, naturally, a tremendous hit, earning FX some of its best numbers ever, and picking up a depressing bevy of awards and nominations. And so now we have 666 Park Avenue, the new ABC series about the most severely evil apartment building in America, and the couple of dozen people (dead, demonic, damned, and dumb) who live and work there. It's Rosemary's Baby meets Hotel, Dynasty meets The Devil's Advocate, Desperate Housewives meets…well, American Horror Story.

It's also, unfortunately, where the dark meets the dull. After a pre-credits sequence dispatches with the previous Resident Manager of The Drake—a swanky apartment building at 999 Park Avenue in New York—a pretty (and apparently pretty nice) couple named Henry (Dave Annable) and Jane (Rachael Taylor) turn up to apply for the position. Jane has degrees in "architecture and historical preservation," and so impresses wealthy, sinister building owners Gavin and Olivia (Terry O'Quinn and Vanessa Williams), who, between them, may as well have cloven hooves, bat wings, and a strong whiff of sulfur. 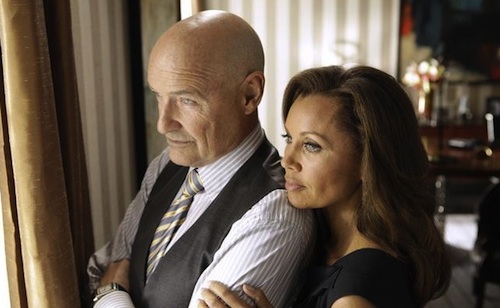 Soon, Jane and Henry have moved into a beautiful corner apartment in Spook Central, and are getting to know the residents. So far, these include a voyeuristic playwright (Robert Buckley) and his cranky fashion photographer wife (Mercedes Masohn); a teen-aged precognitive kleptomaniac (Samantha Logan); and a man (James Waterson) who has made a deal with Gavin in order to help his wife (Lucy Walters) recover from a severe case of being mostly dead. Meanwhile, Jane has discovered a cryptic mosaic on the floor of the building's basement, and uncovered evidence of secret rooms belonging to secret societies. (Gozer worshippers, one assumes.)

None of this is very original, or very fun, or (least of all) very scary. The best thing I can say about 666 Park Avenue is that—and I never thought I would say this—it makes me appreciate American Horror Story more. The FX horror anthology may be lurid, leering, and loopy as hell, but it is not predictable, and it is not tame. And so far, 666 Park Avenue feels like a watered-down, prettied-up, paler imitation, more Fantasy Island than AHS. "Safe" and "predictable" are dangerous adjectives for a horror series, and 666 Park Avenue seems to have no real scares, no real surprises, and no real taste for the jugular. "Outrageous, scary, and evil" make for interesting television; "polite, well-dressed, and slightly naughty" do not.

When Is It On? Sundays at 10/9c, on ABC, beginning September 30. The pilot episode is available to watch free online at http://beta.abc.go.com/shows/666-park-avenue.

Will I Keep Watching? No. I'm tempted to say it's something my grandmother might have watched for a guilty pleasure, but my grandmother had better taste.

Will I Keep Reviewing It? Hell no. However, forcing my way through these phoned-in paragraphs is making me reconsider my decision not to review American Horror Story this season: tepid, slightly wicked swill like this makes me better appreciate the pleasures of discussing brain-eating, dog-microwaving, rubber-suited fetish murders.

Will It Last? I doubt it: on the basis of this pilot, it's neither scary enough, nor fun enough, nor glamorous enough to find much of an audience.