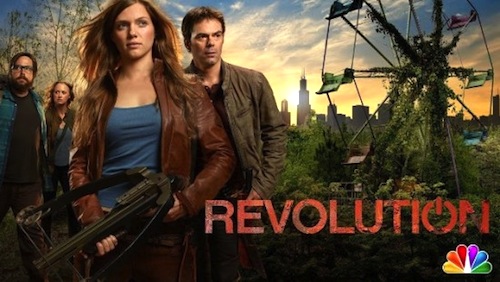 In “First Look/Last Look,” I will once again be doing very quick reviews of a few new fall shows, panning for gold in the fetid riverbed of the 2012-2013 network television season. While I hope this experiment yields at least one show that I will want to add to my regular viewing—if not reviewing—schedule, I’m not holding my breath. Call me pessimistic, but, in most cases, I expect my first look to also be my last.

Unfortunately, those 70 seconds all come very early, at the end of the pre-credits sequence, when the premise of the show is established: what if everything that ran on electricity suddenly ceased to work, forever? We experience this phenomenon—which will be known as The Blackout—through the eyes of a Chicago family, the Mathesons: father Ben (Tim Guinee), mother Rachel (Elizabeth Mitchell), daughter Charlie, son Danny, and—elsewhere in the city—Ben’s brother Miles (Billy Burke). The first two minutes of the pilot manage to work in four or five heavy-handed references to how much we all are slaves to our devices: Mom’s on the phone, 5-year-old Charlie is zoned out in front of the TV, 2-year-old Danny is already working an iPad, and Miles is having a conversation about how people don’t talk anymore, they just text.

And then Ben comes rushing in, stammering about how everything is going to shut off: while he frantically downloads some mysterious MacGuffin Code into a flash drive, we see everything electronic start to short out: lights everywhere go off, cars die on the highway, and airplanes fall from the sky. It's a fascinating set-up, and a strangely seductive one: our entire modern way of life, ending in an instant. For those 70 seconds, from the beginning of the Blackout to the credits, one might get excited about watching characters navigate this strange new world, in which they can't even turn on a radio to find out what's happening.

And then a title card appears, reading "15 YEARS AFTER THE BLACKOUT," and in that moment Revolution flashes forward, wellpast the only interesting idea it seems to have had. 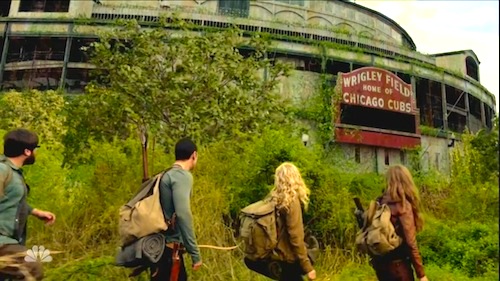 From a potentially brilliant and terrifying premise, the pilot episode (directed—though you wouldn't know it—by Iron Man director Jon Favreau) leaps to a dull and disappointingly familiar post-apocalyptic vision: cities are overgrown, America has returned to a feudal agrarian society, and jackboot militias are the only form of government. Charlie (Tracy Spiridakos) and Danny (Graham Rogers) are now living with their apparently widowed father on a peaceful, boring commune where people use abandoned cars as planters. A former Google millionaire named Aaron (Zak Orth), lecturing some small children, provides some vague exposition about the 15 missing years, as well as the only explanation of the Blackout we're probably going to get for a while: "Physics went insane," he says. "The world went insane, overnight, and nobody knows why."

At this point it becomes clear that Revolution is less interested in its intriguing premise, and more interested in using it as a fuzzy justification for a fairly standard dystopian tale. And the show can't even be bothered to explore this new society for more than a few minutes, because almost immediately the plot machine kicks into gear: some militiamen show up, led by the sinister Tom Neville (the always-interesting Giancarlo Esposito). Neville has come in search of Ben, and ends up leaving with Danny, thus setting Charlie off on a "find my brother" quest through the ruins of America: her first stop is to find her alcoholic, sword-wielding lethal weapon of an uncle, Miles, somewhere in Chicago.

Based on this pilot, Revolution has a number of problems, not the least of which is its focus on its attractive-but-dull teen-age leads, Spiridakos and Rogers. (You can almost hear this show's creators screaming "It's like The Hunger Games!" with every shot of crossbow-wielding Charlie walking through the woods.) It's too early to say whether these young actors are talented—though the signs are not promising—but it has to be said that their characters, so far, are not the least bit interesting: the writing gives us no clue as to who they might be, beyond their situations, and neither actor seems up to the task of bringing a bland-on-the-page character to independent life. Of the older actors, Burke and Esposito fare better, but they also deserve better than the fairly clichéd action-movie archetypes they've been given to play. 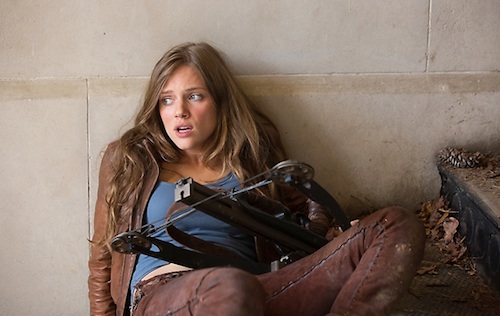 The real problem, however, is the squandering of a potentially rich premise, which is a failure not just of storytelling but also of vision. However it came about, the world of Revolution is one we've seen any number of times before, and here it is oddly sanitized and almost completely devoid of interest. There is a curious absence of creativity, as though no one involved was particularly interested in world-building:  from the characters, to the customs, to the speech patterns, to the costumes, to the settings, everything in Revolution feels not just familiar but tired. (Since the show clearly wants us to make this comparison, it's worth noting that The Hunger Games had a fairly thin and comparably vague premise itself, but still presented a world that was boldly and richly imagined.) The threats are mundane, the "surprises" are predictable and by-the-book, and the action sequences are, at best, made for television.

There's a school of thought that says you shouldn't judge a new show by its pilot: I have never enrolled in that school. True, there is plenty of time for Kripke and his team to explore some interesting aspects of this wide-open world, but I would need to see more evidence of a vision—of a real imagination at work—to invest any more time in this show. Something called Revolution should not feel so formulaic and familiar.

When Is It On? Mondays at 10/9c, on NBC. The pilot episode is currently available to watch online for free at www.nbc.com/revolution.

Will I Keep Watching? Not even on the television dead-zone of Monday nights.

Will I Review It? I'd rather shove a crossbow bolt up my ass.

Will it Last? My prediction: one-season-and-out, like last year's similarly high-concept/low-voltage "Terra Nova."