Spoiler Level: Safe, but contains some spoilers for the earlier films in the trilogy.

I should probably start by confessing that I went into Christopher Nolan's The Dark Knight Rises with an agenda. While I consider it part of my sacred responsibility as an unlicensed internet hack to approach every film with an open mind, I consider it another of my responsibilities to poke holes in undeservedly hyped critical and fanboy darlings to let a little hot air out. The first two entries in Nolan's Batman trilogy—Batman Begins and The Dark Knight—had struck me as good movies, and worlds above all the previous on-screen representations of the character. But they had also seemed to me overblown, overlong, overpraised, and unrelentingly joyless. (As Heath Ledger's Joker had asked in The Dark Knight, "Why so serious?") Since I'd never written about any of them, I was looking forward to this third film in the trilogy, which would provide me with my first opportunity to present a counter-argument to the legions of sycophantic critics and slavering fans.

So I went into my screening of The Dark Knight Rises cranky, critical, and slightly vindictive, with my proverbial poisoned pen poised with purpose.

And then, goddammit, I really, really liked it.

For the record, I stand by some of my earlier criticisms. All three movies in the trilogy are too long, and, at a bloated 165 minutes, The Dark Knight Rises could have comfortably stood to lose at least 20 percent of its running time. But it didn't bother me here as much as it had in the slightly-shorter-but-seemingly-much-longer The Dark Knight, which felt like it came to a satisfying conclusion and then went on for 40 additional, monotonously bleak minutes.

The Dark Knight Rises compensates for its length with some variation in tone, setting, and mood, which is something the earlier films were sorely lacking. There is some (scarce) humor, there is some genuine human interaction, and there is—most importantly—some hope. And this film builds so successfully—and so satisfactorily—on the earlier films that it actually improves my opinion of them: it is now clear that Nolan has not just been making three films, but telling one story in three-acts. In retrospect, the long setup of the first film, and the unremitting darkness of the second film, were both necessary to set up this triumphant third act.

The Dark Knight Rises is set nearly a decade after the last installment, and The Batman has not been in seen in Gotham City since he accepted the blame for the murder of Harvey Dent (Aaron Eckhart in The Dark Knight). Bruce Wayne (Christian Bale) has become a recluse, mourning the death of Rachel Dawes (Maggie Gyllenhaal in The Dark Knight). He believes there is no longer any need for The Batman, but—as his loyal butler Alfred (Michael Caine) tells him—he forgot to replace that existence with an actual life.

Bruce Wayne and Commissioner Gordon (Gary Oldman) have kept the secret of Dent's turn to the dark side, and so the squeaky clean image of the crusading D.A. has become the patron saint of the new Gotham City, where the wealthy are living large and prosperously through a relatively crime-free golden era. However, as cat burglar Selina Kyle (Anne Hathaway) tells Bruce, "There's a storm coming." Kyle is the voice of those who are not living quite so large in the new Gotham. (There's are persistent echoes of the financial crisis and the anger of the "99 Percent" movement throughout The Dark Knight Rises, which lend the film some contemporary thematic resonance, but are vague enough to avoid dragging the film into a political screed.)

The real storm, of course, comes in the form of Bane (Tom Hardy), a hulking mercenary and warlord determined to pass final judgement on the decadent, irredeemably corrupt city of Gotham. When Bane and his acolytes effectively take over Gotham, cutting it off from the outside world and removing all government authority from the equation, Batman must come out of retirement and save his city, assisted by his old friends (including Gordon, Alfred, and Morgan Freeman's Lucius Fox), and a few new ones (such as Joseph Gordon-Levitt's rookie cop John Blake, and Marion Cotillard as Wayne Industries board member Miranda Tate).

Batman has always been the most psychologically complex of superheroes, and—as I'm hardly the first to point out—his villains all tend to represent funhouse mirror distortions of his own personality. (The 1989 graphic novel Arkham Asylum: A Serious House on Serious Earth, by Grant Morrison and Dave McKean, dealt with this theme head-on: locked in the famous madhouse with his own rogues gallery, Batman is told, "Arkham is a looking glass, and we are you.") He is, for example, a hero who trades in fear—he became a bat because, as he said in his first origin story back in 1939, "Criminals are a superstitious cowardly lot"—and so we have the villain of Batman Begins, the phobia-exploiting Scarecrow (Cillian Murphy). Batman is a humorless creature of law and logic,  driven in dark and troubling ways: it makes sense that his greatest enemy is The Joker (so memorably portrayed by Heath Ledger in The Dark Knight), an agent of pure chaos and motiveless insanity. 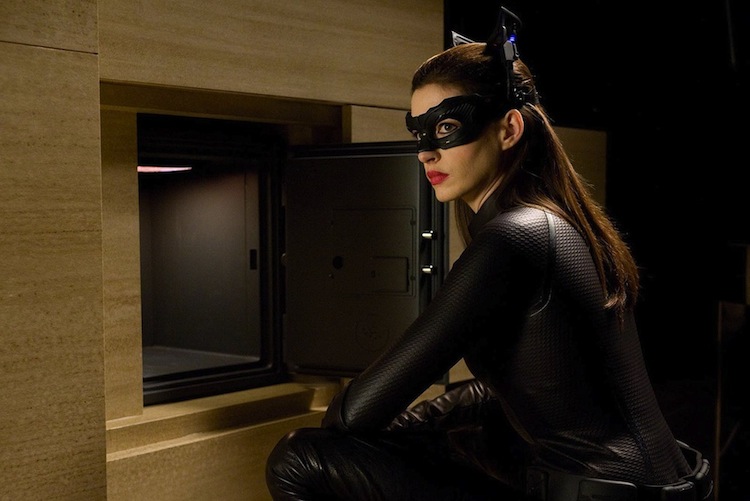 Catwoman (who, incidentally, is never called that here) has always been his female counterpart, the anima to his animus, the feminine side that he has almost completely denied in his obsessive quest for vengeance. In over 70 years of Batman stories, Batman and Bruce Wayne have each had occasional love affairs, but none has lasted: Batman has no Lois Lane. Selina Kyle is the closest thing to a soul mate Batman has, and Nolan was wise to save her for this installment of the trilogy, as Bruce Wayne tries to contemplate whether he can leave his dark crusade behind and actually have a life. I was skeptical about Hathaway's casting, but she turns in a smart, sexy, subtle performance, and keeps the character grounded and real even while bringing a lightness and sense of play that has been sorely missing from the franchise.

Nolan was smart, also, in his choice of Bane (an unrecognizable but effective Tom Hardy) for the final chapter of The Dark Knight trilogy. At the heart of the conflict in these films is the question of whether a masked vigilante taking the law into his own hands is really the best response to crime and corruption, and Bane becomes an interesting representation of that theme: there has always been an uncomfortable element of fascism in some portrayals of Batman, and here Bane's motives and methods can be seen as dark magnifications of Batman's own, even as they're masked in rhetoric about liberation and the greater good. (Those looking to see Bane's class warfare as a critique of the Occupy movement would probably do better to look at the falsely populist, gun-toting, anti-government ideology of the Tea Party. But I digress…)

On a more literal level, Bane is also the perfect villain to face Batman in his later years: after the emotional threat of the Scarecrow, and the battle of wits with the Joker, Bane is a purely physical threat for a Batman who is no longer in his physical prime. Bruce Wayne walks with a cane as The Dark Knight Rises opens, and we quickly learn that being Batman has taken its toll: his bones are creaking, his cartilage is destroyed, and his kidneys are scarred. The Dark Knight Rises has some of the most visceral and punishing fight scenes of this or any other superhero franchise, and Bane brings a sense of real danger that has largely been lacking in the previous action sequences. (The villain's legacy from the comics—as the man who literally "broke the Bat"—is not overlooked here.) Personally, I've never felt that action sequences are Nolan's strength, but there are some thrilling sequences in The Dark Knight Rises, and what he lacks in panache he more than makes up for in spectacle. (I saw the film in 35mm, but I will be sure to catch it in IMAX as well, if only to see director of photography Wally Pfister's gorgeous cinematography in the scale it deserves.)

There are clear parallels—some overt, some merely thematic—between Nolan's Batman films and some of the seminal graphic novels that helped define the modern interpretation of the character. If Batman Begins was the cinematic equivalent of Frank Miller and David Mazzuchelli's 1987 classic Batman: Year One, and Alan Moore and Brian Bolland's 1988 one-shot The Killing Joke clearly influenced The Dark Knight, this latest film is Nolan's version of The Dark Knight Returns, the landmark 1986 book by Miller and Klaus Janson that redefined Batman for the modern age by imagining his twilight years. The comparisons are not direct—in all three cases, the books share few plot elements with the films—but The Dark Knight Rises serves the same purpose in Nolan's trilogy that The Dark Knight Returns served in Batman's mythos. As Alan Moore wrote in the introduction to The Dark Knight Returns:

"All of our best and oldest legends recognize that time passes and that people grow old and die. The legend of Robin Hood would not be complete without the final blind arrow shot to determine the site of his grave. The Norse Legends would lose much of their power were it not for the knowledge of an eventual Ragnarök, as would the story of Davy Crockett without the existence of an Alamo. In comic books, however, given the commercial fact that a given character will still have to sell to a given audience in ten years' time, these elements are missing. The characters remain in the perpetual limbo of their mid-to-late twenties, and the presence of death in their world is at best a temporary and reversible phenomenon.

"With [The Dark Knight Returns], time has come to the Batman and the capstone that makes legends what they are has finally been fitted…"

—from "The Mark of Batman: An Introduction," by Alan Moore, in The Dark Knight Returns

Frank Miller's The Dark Knight Returns gave us a perfect conclusion to the Batman legend in the comics. (Miller himself later went back and screwed this up with a truly excremental sequel, but that's neither here nor there.) One of my critiques of this trilogy is that these films don't feel anything like the comics, and, by that measure, this film does not come close to overthrowing the recently-crowned The Avengers as the greatest comic book adaptation of all time. Ultimately, however, that's not the most important measure: Nolan's Batman is not the comic book Batman, but it is an honorable variation—an alternate reality, an "Elseworlds" version, if you will—and here Nolan provides an equally satisfying capstone to his Batman's legacy. Without giving away any spoilers, the last hour of The Dark Knight Rises brings the entire trilogy to as perfect a landing as any franchise in recent memory.

Some fans—those who adored the brutal nihilism of The Dark Knight—will no doubt find this exquisite closure too neat, too convenient, and far too edifying. For me, it was the perfect completion of the difficult emotional arc begun in Batman Begins, and a welcome blast of light at the end of this long dark journey. Audience members might have been fooled into thinking Nolan's trilogy was a Greek tragedy, a noir crime drama, or a tormented psychological thriller, but—as the title of The Dark Knight Rises indicates—it is, in the end, something more affirming and uplifting. It turns out to have been about a hero all along.