I'm running seriously behind schedule this week—sometimes the day job interferes with my more important pursuits—and now there's another episode of Mad Men barreling down on me in less than 24 hours. So, as much as I'd like to provide a detailed blow-by-blow of "Signal 30"—up to and including the soul-stirring sight of Lane Pryce delivering a long-overdue beatdown—I'm mostly going to share a few disorganized thoughts about The Short and Happy Life of Peter Campbell.

As I've indicated before, Don and Betty Draper were, when Mad Men began, the template for what happiness was supposed to look like in 1960: he was the handsome, manly executive, and she was the beautiful, perfect hostess, and they lived happily with their adorable children in a picket-fenced house in the suburbs. In reality, of course, Don and Betty were absolutely miserable, but that didn't stop people like Pete and Trudy Campbell from following in their footsteps.

More than any other characters on the show, Pete and Trudy have looked to the previous generation to know that what they were supposed to do and who they were supposed to be. While other young people (like Ken and Peggy) have dared to imagine that there might be other ways to live, Pete and Trudy have aggressively clung to and pursued those old-fashioned roles: they have never aspired to anything more than the most traditional, clichéd, socially respectable version of the American dream. (They even honeymooned in Niagara Falls, for Christ's sake.)

Technically speaking, Don and Pete are probably the same generation: born around 1926 and 1934, respectively, there is less than 10 years' age difference between them. But those are pretty important years: Pete is too young to remember much of the Depression, and young enough to have missed both WWII and Korea: as such, Pete has far more in common with the Baby Boomers than he does with Roger or Don. Pete probably never wanted for anything, and he never went off to war, and he's never really built anything of his own. So he's always wanted to be a man like Roger or (especially) Don, but he knows he isn't, and everyone else knows it too. He tries to act like the men he looks up to, but he's not really one of them, and, deep down, he knows he never will be.

"Signal 30" makes the nature of Pete's desperation crystal clear, but the desperation itself has always been there. (Remember when Pete's father died, and his first instinct was to check with Don to make sure he was reacting and behaving the right way?) Pete has always seemed like a sycophantic child dressed up in big-boy clothes, emulating his older brothers. He's not really a man: he's an assemblage of stolen mannerisms. Because he's been paying such desperately close attention to his predecessors, Pete has made all the right moves: he's risen in the firm, right on schedule, and he has a pretty wife and a baby and a perfect home in Greenwich. But he can't understand: why isn't it enough? Why isn't he happy? Why don't other people respect him? 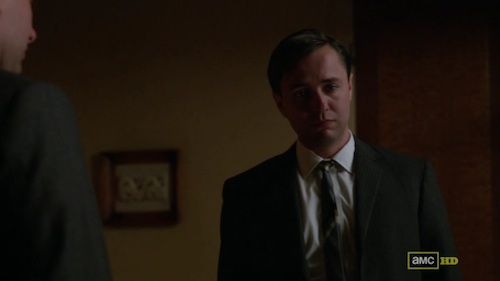 Even when he's completely alone, Pete acts like someone is watching him, and judging him, as we see this week when he gets up at night to fix the dripping faucet. No one is watching him (except us), but he is so proud of himself when he gets the drip to stop. I have seen other men do this sort of thing, he seems to say. And now I am one of them.

Pete and Trudy have been racing to become Don and Betty for years, and the party they throw this week is intended to be a celebration of their triumphant crossing of the finish line. His former competitor at the firm, Ken Cosgrove, has also been invited, but the entire evening has been planned around, and for, Don. Pete has always wanted Don's approval and respect, and has never been able to get it. "I'm not going to pretend it isn't a big deal to us that you came out," Pete tells Don, reminding him of all the times they invited Don when he didn't come. (This is another dynamic that goes all the way back to the pilot episode, when Don refused to go to Pete's bachelor party.)

The funny thing is, at the dinner, Don does treat Pete like an equal; Don is being perfectly pleasant, even—for him—friendly. But Don still manages to show Pete up without even trying: when the faucet Pete thought he had fixed fixed finally blows, Don has whipped off his shirt and repaired it—to the applause and general swooning of the gathered women—while Pete is still fumbling in his toolbox. Even in his own home, Pete will never be a man the way Don is a man. No matter what he does, Pete just can't get the big steak. 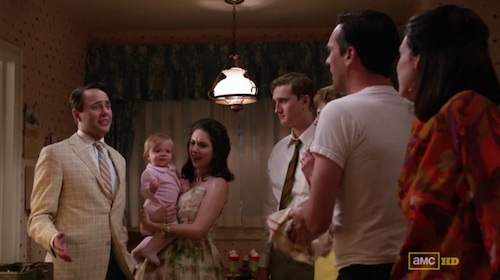 The question of what is required "to be a man" runs throughout this episode, with Lane's parallel story echoing the themes of the main plot. (Lane doesn't like football, and doesn't like hanging out in the pub with the boys; he was in the war, but explains apologetically that he spent most of the war as a supply assistant, and never saw combat. The Jaguar executive didn't ask Lane to go out whoring because, as Pete tells him, "He thinks you're a homo.") At the end of the episode, however, it is Lane who wins everyone's respect: he is different from the other men, but, as Joan tells him, "that's a good way to be."

Meanwhile, nothing Pete does to feel like a man works out the way he hopes. Flirting with Jenny (Amanda Bauer), a teen-ager in his Driver's Ed class, does the trick, until she turns her attentions to a handsome athlete her own age named Handsome. Sleeping with a hooker who calls him "king" makes him feel like a man, until his own ideal man, Don Draper, judges and chastises him for it. It's Pete's bad luck that he's trying to be like his hero Don at a moment when Don is trying to leave the man he was behind. (Pete and Trudy are hosting old-fashioned dinners, but Don and Megan have moved on to hip parties; Pete is starting to womanize, but Don is trying put his womanizing days behind him.) It's Pete's worse luck that he's dedicated his entire life to getting a seat at the table of the Establishment—the white male fraternity of rulers—at a moment in history when the Establishment has ceased to be cool. Pete's following all the rules, but the game itself has changed.

Way back in the very first episode of Mad Men, Don advised Pete to alter his behavior:

"Keep it up, and, even if you do get my job, you'll never run this place. You'll die, in that corner office, a mid-level executive with a little bit of hair, who women go home with out of pity. You want to know why? Because no one will like you."

Don's words were prophetic, down to the corner office and the thinning hair. Pete has a watered down version of the life he wanted. He now has, for example, a bigger office, but what he wanted was Roger's office. He has a semblance of the life Don had, but it doesn't make him happy, and even Don doesn't respect it now. Pete has spent his whole life trying to be something that is now going out of style, and he's never developed any personality of his own. He's a success, but no one likes him, because there's nothing there to like: he's a bad copy of something that's now going out of fashion. 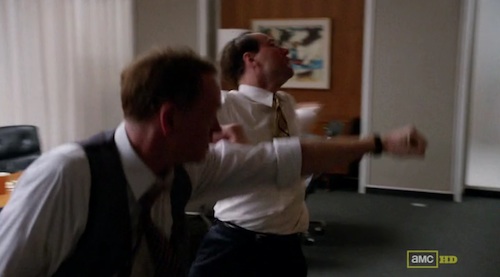 And, in his lowest moment, Pete can't even win a fistfight with the guy he just called a homo. "Why are we even having a fight at work?" he asks Don, after. "This is an office. We're supposed to be friends." But Pete has no friends: he's just not enough of a person, and he knows it. He's become everything his society told him he should be, in order to be liked, but no one likes him. He's become exactly what the older men taught him, by example, to be, and that turns out to be "a grimy little pimp." He's achieved everything he was supposed to achieve, but as he tells Don now, he has nothing.

Ken's sci-fi story—about the robot on the bridge, who could only follow orders until he found one small, destructive way to rebel—was offered as a metaphor for Charles Whitman, the Texas sniper. But, of course, it is also a metaphor for Pete, who has followed orders—of a sort—his entire life. He's a robot on the bridge to the future, unable to break free of his programming. All he might be able to do—as the robot did—is snap. (I doubt it's a coincidence that we were reminded that Pete still has a rifle in his office, a fairly literal "Chekhov's gun" that has been waiting patiently since Season One to fulfill its dramatic purpose.)

"Things seem so random all of a sudden," Jenny tells Pete. "Time feels like it's speeding up." The line is a little too on-the-nose, but the fact of the matter is that time is speeding up: the old rules are changing, the old definitions of success, adulthood, and happiness are shifting. The people who have a chance of happiness are those—like Don, Ken, and Joan—who are willing to ride the changes and perhaps discover a different kind of life, a different standard of happiness. The most miserable people will be those—like Pete, and, so far, Betty—who have tried so desperately to fit into the old roles, for so long, that they won't be able to see any place for themselves in the changing world order. 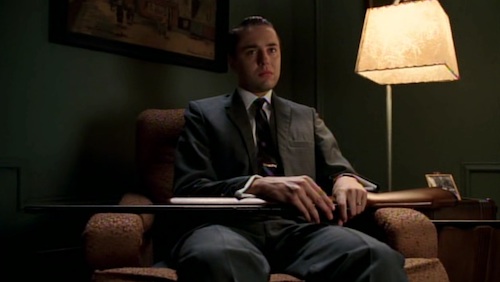