It is, apparently, my season to talk about generational changes and cultural paradigm shifts. The other show I'm reviewing at the moment, Game of Thrones, led off its second year this week with its world reconfiguring itself in the aftermath of a major generational upheaval, with the younger leaders reinventing the rules after inheriting responsibility from their parents. This season of Mad Men—as we started to discuss last week—looks like it's going to focus on similar themes, as the social changes of the late 1960's have really begun to kick in, and the younger generation starts pushing their parents out of the way.

I said last week that Betty Draper was the ideal personification of the era that is passing out of power this season: she's the American dream from which America is beginning to awaken. Don is an advertising man, but Betty was the ad: the pretty, proper poster child for happy suburban America. Like most advertising, the image was a lie—Betty has never been happy—but she has always maintained a pristine front, and she's always been a perfect object of desire for the men around her. She never has a hair out of place, she never wears the wrong clothes, she never commits a social gaffe. She was scandalized when a divorcee moved in down the street, horrified when her daughter was caught masturbating at a friend's house, and she stayed with Don much, much longer than she should have in order to avoid destroying the illusion of her perfect life. 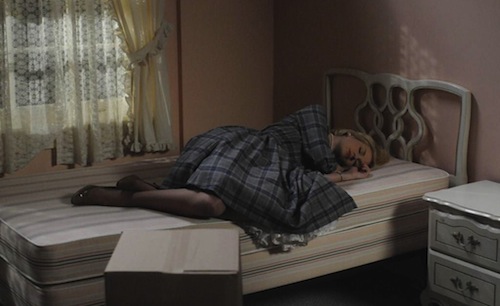 I have to admit, I've never liked Betty, but it's not completely her fault: she's a silly creature of her silly time, and she has never had—or had the encouragement to develop—the tools to break out of her mold. What this meant was that, for the first three years of the show, Betty was quietly having a total nervous breakdown from the strain of maintaining this impossible farce. She saw various psychiatrists (including, last season, a child psychiatrist); she had random neurological quirks (crashing her car back in Season One); and—in perhaps her finest moment—she took out a rifle and shot at the neighbor's pigeons. (She also had inappropriate interactions with the strange boy next door, flirted with a young man at the riding stables, and engaged in random sex with a stranger in a bar.) 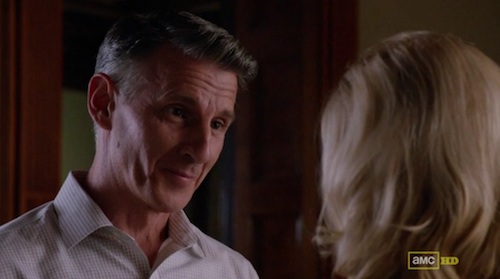 Interestingly, when she finally broke away from Don, it wasn't a move towards independence, and it wasn't a move towards the future. Having spent so long trying to live the life she thought she was supposed to live, she couldn't imagine any other. She left Don not for a younger man, or for solitude, but for an older man—one who was more stable, more conservative, and more firmly entrenched in the traditional societal roles that represent happiness to her.  While Don has—for better or worse—moved forward into the changing culture of the '60's (marrying a child of that generation), Betty has moved further backwards into the '50's.

And now we see the result of that decision: she is, if possible, more miserable than ever. She probably hasn't admitted that to herself—she does not, really, have the capacity to do that—but it is manifesting itself in depression and weight gain. "When a housewife has a rapid weight gain," her condescending doctor tells her, "the cause is usually psychological: unhappiness, anxiety, boredom…" This plotline, obviously, was a way to shoot around January Jones's real life pregnancy during shooting (though Jones, of course, looked fabulous throughout her pregnancy, and they had to pad her out in an unconvincing fat suit and phony jowls).

But it's also a symbol of her defeat: she did everything she was supposed to do, she crafted herself into the perfect woman according to her generation's standards, and somehow she's ended up eating shit every step of the way. Now her ex-husband has taken up with a 25-year old sexpot, and Betty is a fat, miserable housewife, left behind by the changing times. She has constant reminders of this throughout this episode. "I almost didn't recognize you," her friend tells her, while her doctor calls her "middle-aged." Her mother-in-law Pauline (Pamela Dunlap) is the cruelest mirror Betty has to look into: "Honestly, at my age, I don't have to please men anymore," Pauline tells her. (Henry's constant assurances that Betty looks just fine to him are a cruel confirmation that Betty is sliding into this same role.) 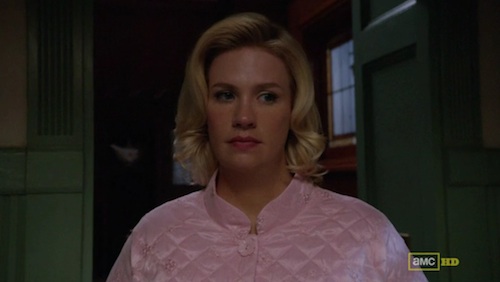 This week, we see Betty deal with a crisis—in the form of a cancer scare—and it will be interesting to see whether it inspires her to change, or pushes her further into depression and self pity. It makes her question what she's leaving behind, particularly for her children. (This is a fear reinforced by repeated shots of a painting of Betty's mother, who passed away shortly before the show began.) Imagining her children being raised under the influence of Pauline and Megan, she realizes, "They'll never hear a nice word about me again." The cancer scare is the physical manifestation of the larger truth: she's already been figuratively replaced—displaced from her spot atop the social order—but now she faces the possibility that she will be literally, permanently removed from the scene.

When the tumor turns out to be benign, Betty has a moment of disappointment in which this sinks in: "It's nice to be put through the ringer, and find out I'm just fat." She's not dying: she's just no longer the perfect woman, and in danger of becoming—in her terms, and in the world's eyes—obsolete. 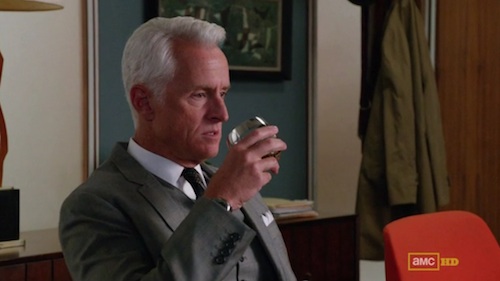 Betty gets the focus in this episode, but the same themes run throughout "Tea Leaves." Roger is obsolete, and has been for some time, and he's only now realizing it. Pete began his powerplay last week, and now he more or less completes it, making it clear to the whole office that he brought Mohawk Airlines back to SCD&P, and that Roger is, in effect, working for him now. "That was the last guy I ever hired," Roger says of Pete, recognizing that his days of running the show are over. 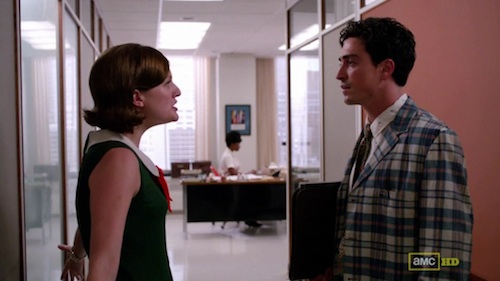 Peggy, too, is also finding her position threatened. When she's tasked with finding a new copywriter for Mohawk, Stan cautions her against hiring the most talented candidate. "I hope you like him; you're going to be working for him one day." Peggy constantly faces the reminder that she is a talented woman in a world where mediocre men can prosper. ("Mohawk is going to insist on a regular copywriter," Roger tells her. "Someone with a penis." Peggy's response is dry: "I'll work on that.") The new copywriter, Michael Ginsberg (Ben Feldman), is a socially-awkward, potentially crazy Jewish man; Peggy goes to bat for him because he's good, but it turns out she doesn't need to. He charms Don and Roger, and waltzes effortlessly into a job Peggy had to fight tooth and nail to earn.

And Don dives headfirst into the generation gap this week, going with Harry to hang out backstage at the Rolling Stones concert because Heinz wants them to do a jingle for beans. The very idea llustrates how slowly, and how poorly, the establishment is adapting to the rapidly changing times. Bonnie (Hayley McFarlane), a teen-ager he meets backstage, expresses doubt that the Stones would condescend to sell baked beans, and Don points out that the band did a cereal ad in England. "It must have been a long time ago," she says. "It was three years ago," he tells her, but, at this moment in history, culture is changing so quickly that three years is a lifetime. 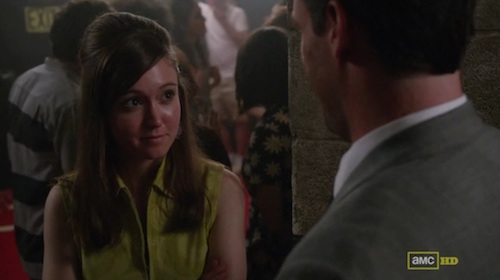 Don—who is never not working—tries to get inside her head, to find out what she hears when she listens to the Stones. But she barely gives him an answer, and doesn't come close to making him understand. He is—as he told Megan last week—40, and it's too late for him, and he knows it. ("I have to make sure I look like The Man," he tells Megan when he dresses for the concert.) Three years is an eternity in his life right now, too: the Don of 1963 would have at least flirted with the idea of sleeping with this teen-age girl, but now he just sees her as a child. (When Bonnie complains that his generation doesn't want hers to have any fun, Don says, "No: we're worried about you.")

"When is everything going to get back to normal?" Roger asks Don towards the end of the episode. The answer, of course, is never: history is moving as quickly as it has ever moved, and the generational shifts have never been stronger. Betty, always a symbol of her generation, has become frumpy and obsolete, replaced by a younger, hipper model. Don, the quintessential playboy, has become an old fuddy duddy, worrying about the kids and no longer able to get in tune with the cultural zeitgeist. (The Beatles were too modern for him last season, and now even they have been supplanted by the Stones, who are far, far too big to do TV commercials.) Kids wear blue-jeans to job interviews, teen-age girls don't know who Charlton Heston is, and Sterling Cooper Draper Pryce has now hired both a black woman and a Jew. Normal, as Roger understands it, is officially a thing of the past. 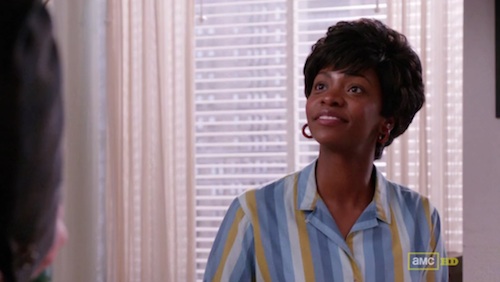