Several years ago, I visited some friends just a few weeks after the birth of their first child. Haggard, exhausted, and pushed to the brink of breakdown by the sleep-deprivation that comes with a colicky infant, my friends described their initial experiences of parenthood with an unusual and heartbreaking candor. "We hate it," they said. "We've hated every second of it." Over the unrelenting screams of their new daughter—a sound that tortured me after five minutes, but with which they had been living for weeks—they expressed feelings that are almost certainly common, if seldom spoken aloud. "It feels like we've made the worst mistake of our lives," they said. "We want our old life back. Honestly, I think we'd smother her if we thought we could get away with it."

Their beautiful little girl has since, of course, become the greatest joy of their lives. That bad period did not last long, but while it lasted there were surely moments when they wondered what all new parents must wonder at one time or another: what if it never gets any better? It is one of those fears so painful and frightening—so threatening to a parent's essential morality and identity—that it can barely be acknowledged. What if I never love my child? What if it never loves me?

Motion pictures have long played on this fear, of course, usually in the form of horror movies like The Bad Seed, Rosemary's Baby, It's Alive, and The Omen. Rarely, however, has the subject been treated as seriously—and therefore as disturbingly—as in Lynne Ramsay's We Need to Talk About Kevin, a 2011 film that is going into wider release this week.

Adapted from the 2003 novel by Lionel Shriver, We Need to Talk About Kevin is a difficult, discomforting film—and I mean that in the best possible way. Tilda Swinton gives a fascinating performance as Eva, a woman living in the aftermath of a shattering crime committed by her first-born child. Ramsay shows us Eva's life in the present—where she is little more than a haunted pariah in her community—but jumps backwards and forwards in time through her relationship with her son, Kevin. The disjointed, non-linear structure is more than a narrative device, for Eva barely exists in the present, and has no future: she is condemned to spend the rest of her life reliving the nightmare of her life before.

As the film presents him, Kevin is a monster from inception, at war with his mother from the moment he leaves the womb. As an infant, Kevin screams so incessantly around Eva that she prefers the sounds of jackhammers, but the boy—maliciously, it seems—quiets down the moment his oblivious father (John C. Reilly) picks him up. As a toddler (played by Rock Duer), Kevin thwarts all his mother's attempts to play with him: he rolls a ball back to her—just once—to show he understands what she wants, and then refuses to ever do it again. As a 6-year-old (Jasper Newell), he deliberately soils himself to torment her, and commits an act of vandalism that is a deliberate symbolic assault on her autonomous, pre-motherhood identity. As a teen-ager (Ezra Miller), he graduates to greater crimes, which sometimes involve others but are always directed at her and her alone. They are enemies locked in the roles of loved ones, and there is a terrible intimacy in their enmity. The only traditional aspect of a mother-son relationship they share is that she is the most important person in his life, as he is in hers: no one else matters, and they understand one another perfectly. One moment, in her frustration, she throws him against a wall and breaks his arm; years later, Kevin tells her, "That was the most honest thing you ever did."

The film wisely avoids the question of why Kevin is the way he is: one of the most harrowing truths of the film is that there are no easy answers. The unspoken question that haunts the film—and Eva—is whether she is to blame, in any way, for how Kevin turned out. Kevin, certainly, seems evil from the moment he is born—it appears to be a question of nature, not nurture—but Eva is a former world-traveler and writer, and there is more than a hint that she resents the role of suburban mother into which she has been forced by Kevin's very existence. We do not see Eva do anything wrong, exactly, but Tilda Swinton's performance—simultaneously haughty and heartbreakingly vulnerable—brings a complexity to the question that almost no other actress could bring. Ramsay's casting of Swinton in this role is a masterstroke, for the actress's slightly unearthly quality makes her seem out of place, and somehow unnatural, even when Eva is perfectly going through the motions of maternal love: without ever saying it out loud, she strikes us as a woman who was never meant to be a mother. Does Kevin sense her resentment right from the beginning? Are her memories of Kevin's apparent sociopathy tainted by her own emotional disconnection?

The fairly sensationalistic subject matter of the novel could have made for a maudlin Lifetime movie-of-the-week, but writer-director Lynne Ramsay (Morvern Callar) delivers a smart, restrained, visually beautiful film that avoids all the lurid traps and literary tropes a lesser filmmaker would have embraced. We Need to Talk About Kevin is one of the more cinematic movies I've seen all year: there is no narration, few speeches, few expository conversations, and almost no articulation of emotions. We are shown, not told, everything we need to know, through a visual language that manages to be both expressionistically rich and remarkably subtle.

(An example: the first shots of the film show Eva in her life before marriage and motherhood, taking part in La Tomatina, the Valencian festival in which an entire town has a massive, joyous tomato-fight. This raw, vibrant orgy of squashed tomatoes—which seems to serve as both a baptism of blood and a celebration of passion—is subtly referenced much later in the film through a cold and miserable image of the broken woman standing in a supermarket aisle surrounded by lifeless, identical cans of tomato soup. Ramsay does not overtly draw our attention to the connection between the two scenes, but the echo is there: a perfect encapsulation of how this woman's life has gone so terribly wrong, all the hopeful promise of her life thwarted, perverted, into this oppressive misery of a suburban nightmare.) 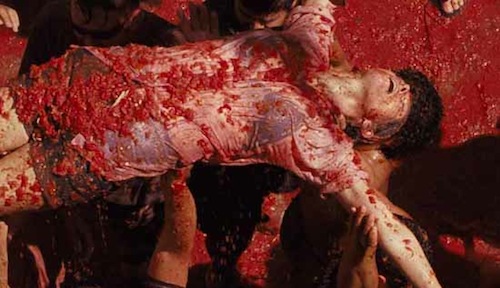 We Need to Talk About Kevin is a harrowing and disquieting story to experience, but it is an artistic success to celebrate, one that trusts its medium, trusts its audience, and provides no easy answers. Tilda Swinton's stunningly brave, unsettlingly complicated performance is the best of her exemplary career, but for me even this accomplishment is surpassed by Lynne Ramsay's evocative, imaginative direction. I haven't read Shriver's novel—and so mean it no disrespect—but a literary adaptation can be a very tricky thing, and it is to Ramsay's credit that We Need to Talk About Kevin never feels like one. Eschewing the standard narrative crutches of the form, Ramsay instead brings real vision and imagination to Shriver's story, and creates a stunning visual tapestry that makes We Need to Talk About Kevin not just a filmed novel, but a rich, devastating cinematic achievement.

It is futile to lament the peculiarities of Academy Award voting—every year there are glaring, indefensible omissions—but the absence of either of these women on the nomination list for their masterful work in We Need to Talk About Kevin is, for me, one of the crimes that helps invalidate the entire endeavor this year. Swinton already has an Oscar, of course, and will no doubt have her chance at more. Lynne Ramsay's snub this year is another example of the Academy's long, shameful history of ignoring female directors, but—on the evidence of this film—one suspects they won't be able to ignore her much longer.