There were moments early in The Adventures of Tintin, directed by Steven Spielberg, when I hoped the film might take flight and become the 21st century Indiana Jones movie that Indiana Jones and the Kingdom of the Crystal Skull so completely failed to be. Certainly, most of the elements are there: it's a light, action-adventure chase film in which our hero and his comic sidekicks follow clues all over the globe, in search of lost treasure, moving from one elaborate, stunt-heavy set piece to another with the bad guys nipping at their heels.

And yet The Adventures of Tintin—though an undeniably impressive technical achievement—is never quite as much fun as it should be.

There is a curious lifelessness to the film, an emotional flatness that I attribute to a surprisingly by-the-numbers script, a failure to properly develop characters, and an ill-chosen format that is—for reasons we'll discuss—disastrously wrong for this kind of story. The result is a gorgeous, frenetic adventure that children might enjoy, and animation aficionados might admire, but which no one will ever really love.

For those who are unfamiliar with the character, Tintin is an intrepid boy-reporter created by the Belgian comics artist Hergé (whose real name was Georges Prosper Remi). Though not widely known in the United States, the globe-trotting adventures of Tintin and his faithful dog Snowy are a worldwide phenomenon: appearing in over 20 volumes between 1929 and 1983, and translated into over 50 languages, Tintin is one of the 20th century's most beloved, best-selling, and influential series of comic books.

The Adventures of Tintin—the film, that is—opens when Tintin (Jamie Bell) buys a model ship at a flea market, and is immediately set upon by a number of menacing looking men who want to buy—or steal—it back from him. The ship, as he quickly discovers, carries one piece of a puzzle that a sinister man named Sakharine (Daniel Craig) will kill to solve, and so Tintin goes chasing all over the world in search of the other pieces. The quest leads him to team up with Captain Haddock (Andy Serkis), a drunken ship's captain whose family history is tied in to both Sakharine's history and to the mystery of a sunken treasure.

The Adventures of Tintin delivers what it promises: it is a fast-moving, visually exciting adventure filled with comedic moments, rollicking chase scenes, and fantastically designed stunt sequences of the kind that no one does better than Spielberg. Though the 3-D effects are largely perfunctory, the motion-capture animation is perfectly executed and gorgeously rendered, with some real beauty and imagination in the visual design. (Some sequences in which we flash back to a 17th century naval battle are stunning to behold.) It is, as I've said, a remarkable technical achievement.

So why isn't it more fun? The fault lies in part with the writing, which offers visual and slapstick humor but very little wit. (It's a greater mystery than any in the story how a script written by Steven Moffat [Doctor Who], Edgar Wright [Shaun of the Dead], and Joe Cornish [Attack the Block] should have so little verbal cleverness.) A larger problem is that the story is nothing but plot development after plot development: there is no emotional story, no character growth, no stakes other than those determined by the necessities of the plot. (Tintin himself does not change, or learn anything, or grow: that is not, as we'll discuss, his function. There is a thin redemptive storyline surrounding Captain Haddock, but it leads nowhere satisfying.) We might engage with the story—I did, for a while, though I grew tired long before the movie was over—but we never engage with the characters.

But the biggest problem is the motion-capture animation. It is, as I mentioned, impeccably done, and probably the best example of the technology ever put on screen. And it's all terribly, terribly wrong.

Hergé was fond of inserting himself into the backgrounds of his comic strips, and Spielberg honors the creator with a clever cameo early in the film, as a street artist who sketches Tintin's portrait: the resulting caricature, naturally, looks like the Tintin from the comic strips. 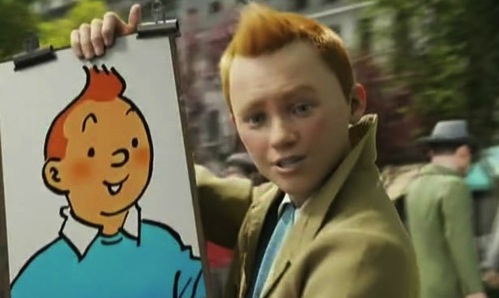 And therein lies the rub. Look at that picture above, and tell me: which character would you rather spend time with?

Though I'm not familiar with the comics, my understanding is that Tintin is very much an everyman. He is plucky, decent, and brave, but otherwise notable for his lack of defining characteristics: his age is undetermined (he seems like a teenager, but he lives alone and carries a gun); he has no past or family; he has no girlfriend or romances. He is, in other words, a blank slate, less a character than a stand-in, with whom readers can identify and onto whom they can project their own personalities.

Hergé understood this perfectly, and intended it that way. In his brilliant and seminal 1993 work Understanding Comics, artist and scholar Scott McCloud discusses how Hergé juxtaposed his simple, iconic character with unusually realistic backgrounds. "The combination," McCloud writes, "allows readers to mask themselves in a character and safely enter a sensually stimulating world."

McCloud uses Tintin as an example of a larger point about how cartoons and comic books use iconic imagery to achieve viewer-identification. "The more cartoony a face is," he writes, "the more people it could be said to describe." Thus, we actually relate more to a simple, iconic face than we would to a realistic one, because we imbue them with our own life-force. "Icons demand our participation to make them work," McCloud writes.

Though I've simplified them criminally, McCloud's arguments—and even just those last two panels above—perfectly capture what is wrong with The Adventures of Tintin. Tintin, as a character, is meant to be a vehicle for reader identification: he's not a story in and of himself, he's a window into the story. By bringing these characters to incredibly realistic life through this motion-capture technology—you can, literally, count the hairs in Captain Haddock's nose—Spielberg (and producer Peter Jackson) miss the point completely. Tintin becomes not an everyman, but a specific man—one who is disturbingly strange-looking, and also, more damningly, rather dull. The blandness that makes Tintin work on the page does not work in the three-dimensionally rendered star of a major motion picture franchise.

In traditional hand-drawn,  2-D animation, Tintin might have worked. (There have been animated versions, most recently a Franco-Canadian series produced in the early 1990s.) But Spielberg's The Adventures of Tintin puts this simple, iconic character in a hyper-realistic motion-capture figure, and it doesn't work at all: instead of identifying us with the character, the motion-capture animation has a distancing effect. For this version of Tintin to work, he would have needed to be a real character: we would have needed to have his back-story and personality fleshed out far beyond what Hergé ever provided. Instead, Spielberg and the writers choose to leave Tintin a blank slate, and a blank slate with realistic pores is just creepy and off-putting.

The same problem plagues the action sequences: surely one of the advantages of this format is that it allows for incredibly complicated stunt-sequences that would be impossible—that is, expensive and dangerous—to realize with real actors. But, however cleverly designed these sequences are—and they are—they have no impact or weight because: a) we aren't emotionally engaged with the characters; and b) we know it's all computer-generated, so there is no "how-the-hell-did-they-do-that" element to our reaction. It's exciting to see Indiana Jones risk life-and-limb in a high-speed chase, but seeing a computer-generated personality-vacuum like Tintin do the same is a lot like watching someone else play a video game for two hours.

I honestly believe that this entire experiment was ill-conceived and doomed to failure. (Imagine, if you will, a motion-capture Peanuts movie: that shudder that just passed through your soul is a good indicator of how ill-suited this technology is to a comic-strip story.) Supposedly, the plan is to film two more Tintin movies, with Spielberg and Jackson co-directing the second and third. I don't expect them to abandon the motion-capture technology on my recommendation, but if they want this franchise to be not just admired but beloved, they're going to need to find a way to find a way to close the identification-gap that motion-capture creates. They'll need to take better care to engage the audience emotionally, and they'll need to imbue their lifelike characters with some real life.