Okay, I've been putting this off, but I think it's time. We're nine episodes into the season, and—though this is a sobering calculation that makes me sincerely question the choices I've made in my life—I've already written something like 13,000 words on American Horror Story. I've been mostly critical, and we've all had fun poking this shambling, patchwork monstrosity of a show with a very sharp stick: good times. But, so far, we've largely avoided talking about one of the most troubling aspects of this most troubling show, and I just can't keep ignoring the obnoxious elephant in the room any longer.

Let's talk about the women. 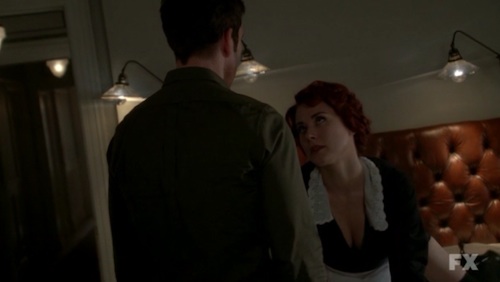 This week's episode is as good as any to view through this depressing lens, since it perfectly embodies the way American Horror Story consistently tries to pass off misogyny and titillation under a veil of psuedo-feminist claptrap. (Remember last week's namedropping—and shallow misinterpretation—of Charlotte Perkins Gilman's The Yellow Wallpaper?) If American Horror Story were a person, it would a be an 18-year old college boy who had taken Intro to Feminist Theory as a lark, read the Cliff's Notes versions of the assigned texts, and then spent the next four years parroting some basic catchphrases at parties in an increasingly desperate attempt to get laid.

"Spooky Little Girl" is written by Jennifer Salt, who last penned the similarly Ben-centric episode "Murder House." Real Hollywood murders must be a particular interest of Salt's, since her previous episode shoehorned in the death of Sal Mineo, and this week she appropriates the death of Elizabeth Short, the so-called "Black Dahlia." Fair enough, I suppose: from the moment her body was discovered, Short's life and death left the realm of the real and entered into sensationalistic American legend, so one more cheap exploitation for entertainment purposes probably does little harm to her memory. (Still, if we aspire at all towards decency, it's worth remembering that Elizabeth Short was a real person, a 23-year-old young woman who died under the most horrendous circumstances imaginable, and probably doesn't deserve to be portrayed the way she is here: as a nymphomaniacal fame whore.) 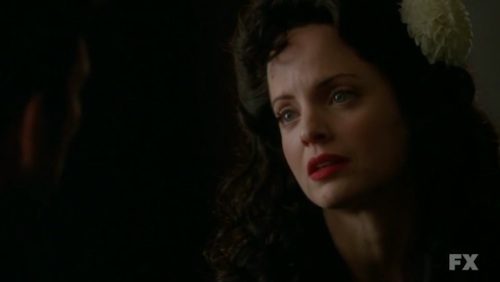 We meet Short (Mena Suvari) as she's arrives at the Murder House in 1947 to see Dr. David Curran, D.D.S (Joshua Malina), who apparently accepts sexual favors in return for dental work. American Horror Story clearly wants to pretend it's interested in how Hollywood chews up and spits out aspiring young actresses: it's a theme hit on later in the episode in Constance's storyline, and Dr. Curran's practice here parallels the thriving business Dr. Charles Montgomery once ran from the same address, providing young ingenues with abortions and optional bat-wing enhancement. The sad fates of pretty young girls who dream of the silver screen is a clichéd topic, but it could be a worthwhile one if treated with any maturity; here, however, it's treated as fodder for titillation and male wish-fulfillment. Short is portrayed as a brainless slut, one who just can't help but shed her clothes for anyone who might be able to help her. This isn't even a reenactment of a famous murder, let alone an examination of the exploitation of women: it's the two-minute set-up for a porno film.

The randy dentist takes Short up on her offer, of course, but he apparently likes his women unconscious, and administers a little too much laughing gas while collecting his payment. Thankfully, the ghost of the aforementioned Dr. Montgomery (Matt Ross) is on hand to make Short's body more portable, leading to the famous crime scene tableau that propelled Short into infamy. Later in the episode, Short's ghost is kind of thrilled to discover that she became famous after all: she turns out to have been not just a willing victim, but a well-satisfied one, as though being raped and murdered was the best thing that could have happened to her. So good, in fact, was this experience, that she's anxious to repeat it with Ben, disrobing in his office before he can even collect her insurance info. She's a nympho even in death. 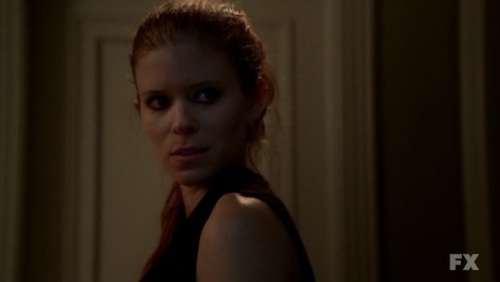 As is Hayden (Kate Mara). "What is it about being dead that makes me so horny?" she wondered aloud last week, and this week she continues to screw her way indiscriminately through the afterlife. Now it's Travis (Michael Graziadei), Constance's boy-toy, upon whom she sets her eye (and other organs). Constance (Jessica Lange), you see, has been treating Travis like shit, shrilly berating him at every turn. In fact, Constance's entire role this episode is to alternate back and forth between negative representations of women: one moment she's a nagging, emasculating bitch, and the next she's a needy, clinging millstone who wants to make Travis settle down, get married, and raise a baby. Neither of these roles are really motivated or consistent with Constance's previous character: it's just an excuse to make the hamfisted points that the episode has decided to make. This is why men cheat, the show seems to be saying, playing off the Travis-and-Hayden relationship against what happened between Ben and Hayden: if the woman at home is either a castrating harridan or a smothering housewife, of course men stray towards a young and sexually voracious playmate.

But the show also wants to make a feint towards showing that this is wrong, and so Travis decides he loves Constance after all (though the show has shown us no reason why he should). His reward for this is that Hayden gets miffed and kills him in the basement. (Jesus, another ghost to permanently roam the halls of Murder House.) 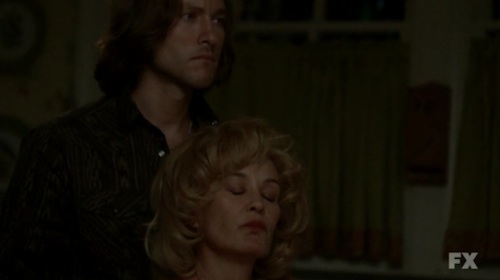 American Horror Story has only two views of women, and both are negative: you're either a sexless old hag or a sexy young slut, and in either guise you're crazy and bitchy. The best example of this is Moira, of course, who—literally—embodies both. (Constance—somewhat less literally—manages to be both as well.) Old Moira (Frances Conroy) is distant, cold, unattractive, judgmental, and sexless; Young Moira (Alex Breckinridge) is seductive, hot, attractive, amoral, and sexually voracious. Young Moira spends this episode trying to tempt Ben into cheating, parading around in her little maid's uniform and even enlisting Elizabeth in a little soft-core lesbian make-out session. How could any man resist? "Isn't this what all men want?" she asks Ben. "The freedom to satiate their needs, guilt-free?" 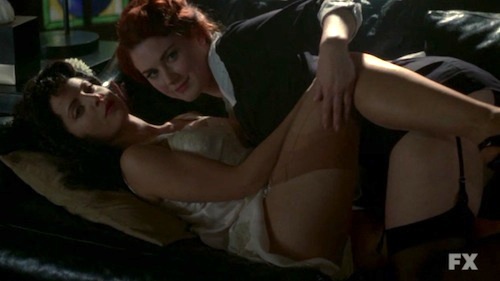 Ben does resist, and the show wants us to think he's noble for doing so. Yes, "Spooky Little Girl" is meant to be the episode that redeems Ben, and shows us what a stand-up guy he can be. Forget the fact that he cheated on his wife after she had a miscarriage—after all, his wife wasn't putting out, so what did she expect? Forget the fact that he used Hayden (as he admits this episode) and then buried her beneath the gazebo when she showed up pregnant: after all, the crazy bitch was asking for it. Forget the fact, in the last episode he had his wife locked up in the loony bin for saying things he knows to be true, and forget that this episode he threatens to keep her there forever because he thinks she cheated on him. (His cheating is understandable and forgivable: her cheating is a crime worthy of permanent incarceration.) 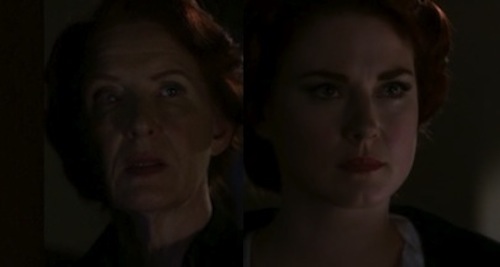 This is what I mean when I say the American Horror Story wants to mask its sleaze in shallow feminist trappings. Young Moira is a cardboard figure of male fantasy, but the show gets to have it both ways: Moira's behavior is presented as some kind of feminist revenge for the oppression of the male gaze; she acts like a slut, ultimately, to teach the man a lesson, and so the show gets to both have its objectification of women and pretend to be above it. American Horror Story thinks that the Moira character is making a statement about the different ways men see women—as either sexless shrews or crazy promiscuous sluts—but the show sees women in exactly the same way.

Similarly, with Ben, the show wants us to believe it's coming down on the side of maturity and commitment—but it also wants to make sure we have plenty of half-dressed young temptresses giving us our weekly allotment of titillation. Therefore, even as we see Ben rejecting all these women, we get to also see his fantasies about not rejecting them: it's the best of both worlds! The show thinks it's saying something about misogyny by being misogynistic, making a statement about objectification by objectifying women, and empowering women by repeatedly showing (and stating) that sex is their only weapon.

Sigh. Look, I understand the argument that it's pointless to take a show like this seriously; one of the reasons I don't rail about the treatment of women every week is that I can't take this show seriously enough to bother. "You have to view it through the prism of the genre," one of my regular commentators reminded me a while back. "It's a fucking horror show, you dolt!" (Hi, Mike!) It's a fair viewpoint, but—even if we choose to ignore the appalling portrayal of women, which is not easy—this kind of shallow characterization does not even make for good storytelling. All stories—and horror stories in particular—require the viewer to feel sympathy for—and identification with—their characters; it just doesn't work with characters this thin and cartoonish, which is one of the reasons this show so consistently fails to be scary. (The pointless "Black Dahlia" storyline this week, for example, would have been both more poignant and more horrifying if American Horror Story made any attempt to show her as a real woman with understandable and sympathetic human emotions.)

I realize I've barely scratched the surface of this conversation, which we'll no doubt return to. (Vivien and Violet, for example, are both more complicated, but I wouldn't say they fare much better; I'll save that discussion for an episode in which they get something to do.) We all know that the history of women in horror is not an honorable one, but what offends me about American Horror Story is the way in which it tries to pretend it is some kind of postmodern, feminist exploration of that tradition. In reality—no matter how many times it mentions Charlotte Perkins Gilman or drops the word "sisterhood"—it's just more of the same. Featuring an assortment of female characters who are either victims to be chopped up, succubi to be resisted, old witches to be battled, or baby-crazy harridans who want to destroy your fun, American Horror Story makes it clear that what it's really horrified of is women.

Oh, and Vivien is about to give birth to the Antichrist—did I mention?