This is the episode of Boss I've been waiting for. Written by Angelina Burnett, "Remembered" largely refrains from the show's usual smutty excesses, and scales back the personal soap opera to the point where it complements, but does not dominate, the more interesting goings-on at City Hall. With a strong premise and a clear narrative throughline—focusing on the staff's attempt to control the toxic-waste story—“Remembered” is a tight, tense, breathless hour of television.

It's also smart. A less sophisticated show would have had the mayor's staff attempting to disprove or deflect the allegations, but Boss understands that, in this 24-hour news environment, the allegations themselves barely matter. Crisis communications is a shell game: it's not about making a case, or arguing the facts, but about distracting the media beast long enough to survive the news cycle. It's not noble, and it's not admirable, but it's the way things work in the American Theater of Short Attention Span. "We need to make it to Friday," Stone (Martin Donovan) says, meaning the team just has to bob and weave for three days before the beast moves on to something else. 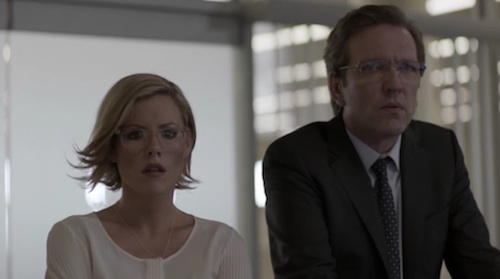 "We need to fan the flames and control the burn," Stone says, explaining that they actually need to make the story worse. It sounds counter-intuitive, but the media wants a story, and won't back down until they get one, so the only option is to give them a version of the story that is about health, not politics. So Kitty (Kathleen Robertson) spends the episode moving the story from Chicago to Bensenville, the site of the dump, and throwing gasoline on the flames of the environmental angle: the water is bad, there is a poison cloud beneath the town, there are schools perilously close to the spill. (It's a good episode for Robertson, allowing her the rare opportunity to keep her clothes on, and showing why Kitty is so formidable.)

Stone (Martin Donovan) also shines this episode, and we see how he is capable of controlling everything while never seeming to do much of anything. Here, for example, he engineers a baggage-handler strike at O'Hare—just to create a much-needed diversion—and does so in a series of phone calls in which he sounds for all the world like he's trying to be helpful. Donovan is perfectly cast, and giving a pitch-perfect performance as the man behind the man: Donovan, like his character, never seems to be doing much, but he brings such stillness and intelligence to the role that he steals every scene he's in. 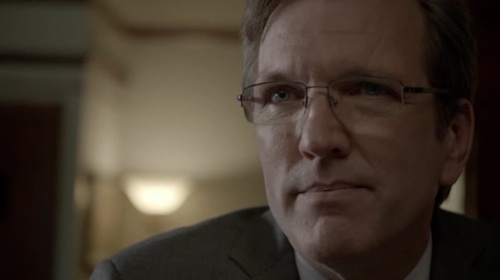 The various ploys seem to work: the heightened sense of an environmental crisis in Bensenville leads to the mayor of that town to ask Chicago for help, and so Kane actually manages to swoop in as the hero instead of the villain of the piece (even picking up some lucrative work contracts for Chicago crews in the process).

But the team is staying just half-a-step ahead of the news cycle throughout "Remembered." Sam Miller (Troy Garity), has given up on railing against the rapid-response of the internet hacks, and decided to become one, launching a website called "Chumpbait" to leak the evidence against Mayor Kane. While the mayor's office scrambles to get control of the first piece of evidence, Miller's mysterious source ("Rosebud") feeds him another: a scientist named Dr. Gabriela Reyes (Carmen Roman), who falsified an environmental report for Kane's administration. Just when the administration has seemingly succeeded in weathering their three-day storm, Dr. Reyes holds a news conference, and it all blows up in their face once again. "It is time we all take responsibility for the crimes we have committed," Reyes says, striking the note of Shakespearean tragedy—“Be all my sins remembered”—that gives this episode its title. 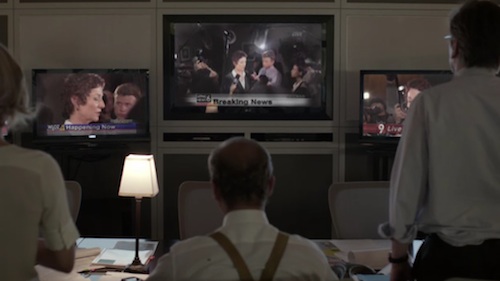 Meanwhile, "Remembered" also finds a nice balance between Kane's personal storylines and his (more interesting) political life. Though there are a couple of moments of Boss's too-common melodrama—like Kane murderously throttling his father-in-law's nurse—Kane also has some moments that manage to be both excessive and effective, striking the right balance between larger-than-life and believable.

"Who's fucking me?" Kane asks early in the episode, and while his team deals with the crisis we see the Mayor conducting a quiet, private mole hunt. He questions Kitty, in a scene that is all the more tense for being remarkably understated. (A great performance from Robertson here, maintaining her professional poise while looking absolutely terrified.) And there is a ridiculous but funny scene with long-suffering Alderman Mata (Ricardo Gutiérrez), in which Kane makes their respective positions clear by taking a dump during the meeting—with the door open—and then forcing Mata to shake his hand before he washes it. It's absurd, but it's also a nice character moment to show that this is the way Kane's mind works, and this is how he sends brutal signals to his underlings. (It's much more believable—and somehow more intimidating—than his physical assault on the same man in Episode One.)

And Kane's (worsening) illness is nicely handled this episode as well. First, he zones out and hallucinates during a meeting with Kitty and Stone, seeing a vision of all the assorted members of his court as he wonders which of them may have sold him out. (I like the show's using his hallucinations to actually comment on, and advance, the overall story arc.) Later, we get a scene between Kane and his wife, in which—following one of their typically cold and distant arguments—Kane seems to break down and confess his illness. Featuring the first tender moments we've seen between them, it's the only sign we've yet had that they ever shared a real, loving relationship between husband and wife. 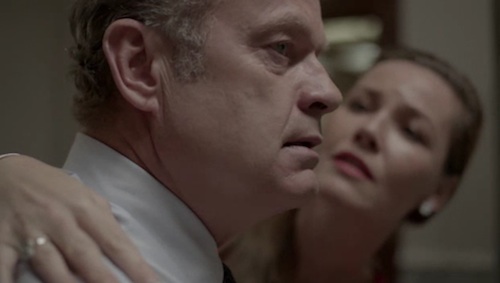 And, of course, it doesn't really happen, except in Kane's mind. It's a nice scene, emphasizing how much he needs—but cannot bring himself to ask for—real human support. (He gets some, later in the episode, from Emma [Hannah Ware], who brings the political and the personal crises together by telling Kane "I'm sorry for what you're going through right now.") Kane remains a largely unlikable and unsympathetic character, but here writer Burnett finds the right approach to making him a little more human and pitiable without getting mired down in monologues and soap opera.

"Remembered" gives me a lot of hope for this show: it strikes a perfect balance between the personal and the political, and brings them all together in ways the show has attempted before—as in the museum scene last episode—but has never executed so well. The episode ends with all of Kane's sins being remembered in yet another way, as nearly everyone he's ever screwed gathers together in one room to convince rising star Ben Zajac (Jeff Hephner) that the Chicago Mayor's office is a better goal than the Illinois Governor's mansion. (As a side note, all the aldermen, union leaders, and other figures gathered here reminds us how impressively Boss has created a large and complex world in just five episodes.)

"Remembered" is the best proof yet of what this show can be: a smart, tense political drama with Shakespearean overtones. It's too early to say for sure, but this episode sure feels like Boss has hit its stride.