Four episodes in, and I'm starting to feel that the problem with Boss may be its main character. This is not necessarily a reflection on Kelsey Grammer's performance, but the subplots surrounding Thomas Kane and his illness tend to be the most melodramatic and absurd, bogging the show down terribly and leading it into silliness after silliness.

This week, for example, we see Kane's drug dealer get arrested, and have to be silenced—permanently—by the black-gloved hitman. We also see that Kane is losing touch with reality: he blacks out during a conversation about school-lunch contracts, and has to go to the video replay to realize that he offered Frank Kohler (Christian Stolte) a school-lunch contract that Meredith (Connie Nielsen) had already promised elsewhere.

None of this is working very well: it's all so ridiculous and over-the-top. I'm already tired of seeing Kane monologue about his cruel fate, drowning his sorrows in joyless sex, and groveling to his estranged daughter Emma (Hannah Ware). Everything about his storyline has been clumsy and implausible: his donning a baseball-cap disguise to go buy medication from a shady drug dealer; his decision to have his doctor disappeared; his shacking up with his father-in-law's nurse; and his blackouts and fugue states that seem to be happening too quickly and too severely for the premise of this show to last.

Boss should either get the mayor's illness out in the open, or else put him in remission and let him get on with the business of actually being the mayor. The behind-the-scenes stuff, with Kane actually politicking and puppet-mastering, is on a higher level than the scenes of his personal story. 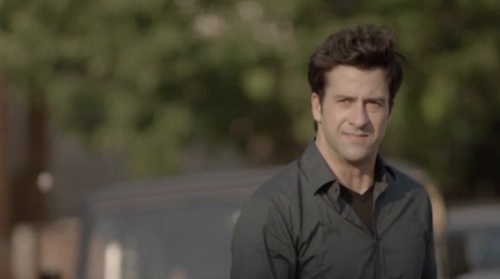 Because there's actually a really good show struggling to come together in the space around Thomas Kane. "Slip" is one of the better episodes so far, in part, because it focuses less on Kane and more on the sharks that are gathering in the waters around him. Most interesting of all, for me, is Sam Miller (Troy Garity) and his pursuit of the O'Hare toxic waste story. In this episode, Miller is getting close to having the final pieces of an above-the-fold expose, and we see him diligently assembling the evidence that will tie the illegal dumping to a cancer cluster in the Chicago suburbs. Unfortunately,  Miller is beaten to the punch by his story's own subject: Kane announces the discovery of the dump himself, blaming it on his predecessor (and father-in-law), Mayor Rutledge. (Miller angrily accuses his editor of giving the mayor a heads-up, which is apparently business as usual for Chicago papers.)

I could get behind a show that featured Miller as the main character. The crusading journalist should be a cliché, but in this day and age he seems like a welcome relic of another time. It helps that Garity's performance is excellent: Miller seems like a man with better instincts than brains, rough around the edges, a little clumsy and crude. (One hopes he is far more eloquent in print than in person: "Why don't I write a story about you and your shit-ass ways, you fuck," he says to his boss.) And I like the running commentary Boss is making about how the internet and the 24-hour cable news networks have all but destroyed print journalism and the standards for which it once stood. (Miller loses his scoop—in part—because he takes the time to get the story right. His editor—perhaps not such a bad guy—inspires Miller to pursue the bigger and better story anyway, invoking the example of legendary Chicago journalist Mike Royko, whose unauthorized biography of the first Mayor Daley gives Boss its title.) 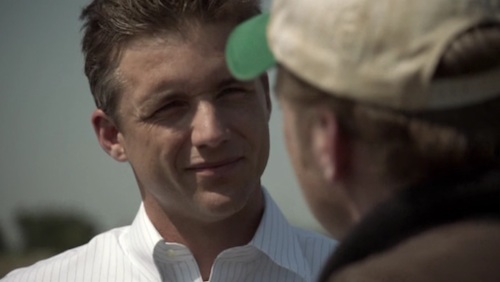 Another story that is working for me is that of the meteoric rise of Ben Zajac (Jeff Hephner). This week we see him meeting with some struggling farmers, and turning the cameras off to have what seems to be a real, genuine conversation without political gain. We see Kitty (Kathleen Robertson) wondering the same thing we're wondering: could this guy be for real? Hephner's performance is interesting: it almost seems as though he doesn't know yet whether he's supposed to be playing sinister or sincere, so he's walking a fine line between naive golden boy and potential psychopath. Personally, I like the idea that he could be both: a very young man who thinks he wants to do good, but one who is by nature a sexual predator and master manipulator.

Fortunately, Governor Cullen (Francis Guinan) is on hand to give the kid a little seasoning. "There are other views of the world than the one you have right now," Cullen tells his young opponent, reminding him that being Tom Kane's puppet is no guarantee of a long and successful career. "I was his guy too, once," Cullen tells him, and succeeds in getting the kid to agree to meet with a "certain group" in Chicago that can tell him a few things he needs to know. (This is, one assumes, the same group Alderman Ross [James Vincent Meredith] is assembling to challenge the mayor; after the school-lunch debacle, we see Ross recruit Frank Kohler to join this "groundswell" as well.) 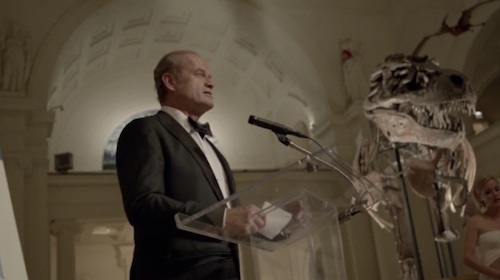 All of this is fairly sophisticated and interesting, but Boss can't resist giving in to its own worst instincts and hammering its points home with metaphors and melodrama. "Slip," for example, puts all the major players together for a gala event in the Egyptian wing of the Field Museum, with Kane delivering a very on-the-nose speech about how "nothing lives forever." Meredith—who notices everything, and took about three seconds to assess the relationship between Kitty and Zajac—then delivers another on-the-nose metaphor to Kitty, about how the handmaidens were buried with the Egyptian pharaohs to ensure their loyalty. 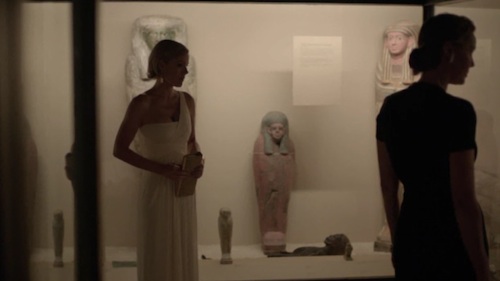 As I sat down to summarize this episode, I realized "Slip" is actually structured around Meredith: she is the one who connects all these various stories together, and we see her meet in turn with Emma, Zajac, Kitty, the nurse, her father, and an assemblage of Chicago business leaders who want assurances that Mayor Kane is still to be trusted. But when I tried to approach it from that perspective, I ran into a problem: Meredith is a total cypher. Boss seems to maintain a strange distance from several of its major characters, particularly the women: it keeps circling Meredith and Emma—we see what they do and what they say—but we don't really know them at all yet. The show is being strangely coy with the interpersonal back-stories that would allow us to invest in these characters.

In short, Boss is working for me as a political drama, but not as a soap opera. It either needs to improve the latter, or it needs to give up and focus on the former.