Wonks: We really want to get into the nuances of political strategy, so we're going to have Zajac reject his spin doctor's advice and decide to run a response-based campaign.
Wanks: OK, but the second that boring shit is over, we're going to need Zajac to fuck Kitty on the conference table.
Wonks: Again?
Wanks: Yes, and doggy-style this time. If you want, they can keep discussing the boring shit while they do it: that makes it kinkier.
Wonks: [Exchanging uncomfortable glances.] OK, well, a little later on we've also got this great monologue for Kane, full of metaphors about horses and peristalsis. See, he's playing on mare and mayor, and saying he can't swallow one more bitter pill…
Wanks: Yeah, yeah, sounds great. But, just so you know, Kelsey is going to deliver it while watching a couple of bored-looking whores fondle each other's tits.
Wonks: Ooooo-kay…I hesitate to mention this, but when Kane meets with the catatonic mayor, we've got him giving us another history lesson about the fascinating Anton Cermak.
Wanks: Jesus, we're gonna need titties and bush in that snooze-fest. Make sure the actress playing the nurse is willing to drop trou.

Needless to say, whatever hope I had that Boss was going to aspire towards the lofty heights of The Wire have, at this point, been smothered in boobs, butts, and Kathleen Robertson's seemingly endless supply of black lace panties.

Which is a shame, because there's still a lot to like about this show. "Swallow" largely centers around the fallout from the video showing Governor Cullen (the invaluable Francis Guinan) with a young Asian man who appeared to be a male escort. Cullen, unable to explain that he was really in Miami to solicit illegal campaign contributions, is advised by his long-suffering staff to just put up with the less-harmful ambiguity about his sexual orientation. (The only piece of good news his staff has for him is that he's three points up with Asian-American community: "Apparently they approve of your taste in men.")

The other advice Cullen's staff has for him is to plead with Mayor Kane for support. ("You really do want to see me suck cock," Cullen protests.) Kane, of course, orchestrated the entire thing, and it's implied here for the first time that the plan was to make the Governor supplicate himself to Kane: he does so here, but the Mayor has—or appears to have—a bout of moral superiority, and throws Cullen out of his office. This comes as a surprise to Kitty (Robertson) and Stone (Martin Donovan), which suggests that Cullen was supposed to be humbled, but not beaten: apparently, they never really expected or wanted Zajac (Jeff Hephner) to win the primary, but now there's a new plan. "The mayor has decided to double down on the state treasurer for governor," Stone—ever loyal—clarifies for Kitty. "Is there something about that you don't understand?" (I continue to adore Donovan's quiet, thoughtful performance as the inscrutable Stone.) 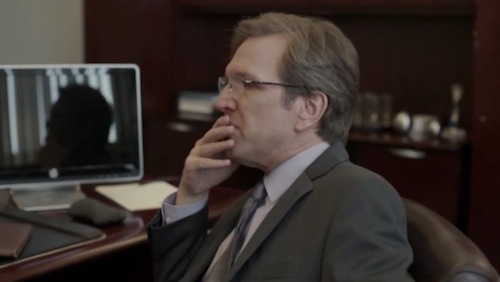 The surprise in this scene is not Kane's turning on Cullen, but the fact that it wasn't planned: it means that Zajac was just a patsy all along, and Kane never had any intention of making him governor. Now, however, he does, which may explain why Kitty—after the aforementioned conference-room fornication—decides to cool things down with the sleazy young candidate. Before she was just fooling around with a political pawn, but now she's boffing the next governor of the state and perhaps realizes they should be a little more careful. (Or, is it possible that she feels bad about the guy's wife and kids? Isn't it pretty to think so.)

Not that Kitty minds, because she simply picks up the next guy she meets in a bar. (First, of course, she checks out the size of his equipment—because, hey, a girl has to have standards.) To say that Kitty is a problematic female character is to suggest that Boss has any other kind: it doesn't. Most of the women on this show appear to have stepped right out of Penthouse Forum, from Always-Ready Kitty, to assorted actual whores, to the random nurse who is quick to put the "suck" in "succor the afflicted." At least the sex scene this episode between Emma (Hannah Ware) and Darius (Rotimi Akinosho) feels somewhat organic, but Emma, too, remains a bizarre and implausible character, moving back and forth between the pulpit and the drug dens. Here she convinces Darius to help her illegally acquire drugs for the free clinic, rather than ask her powerful father for help. (All of which leads me to wonder: just what is the public perception of the mayor's daughter? Are no reporters following her?)

The only two women who don't seem to be sexually voracious—so far—are Meredith (Connie Nielsen) and Dr. Harris (Karen Aldridge), who cross paths this week. Early in the episode the Mayor assures Harris that no more scary serial killers will come calling, but after Meredith runs into the doctor at an event and begins asking questions, the same Hannibal Lecter-type messenger informs the doctor that she will be leaving town—immediately, and permanently. This is yet another storyline that just feels ridiculously dramatic and preposterous: surely the sudden disappearance of the doctor will cause more suspicion, not less? (It's always the cover-up that gets you.) 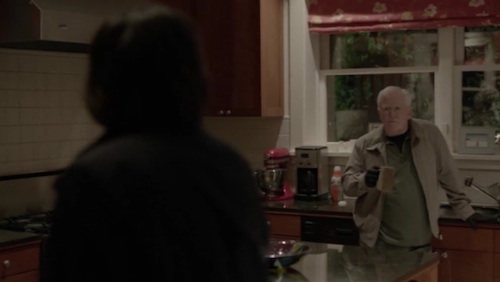 And that's the problem with this show in a nutshell. There are smart things going on—I like the campaign stuff, and the slow unraveling of the O'Hare mystery by reporter Sam Miller (Troy Garity)—but Boss doesn't seem to trust that that's enough.

Over at The AV Club, reviewer Meredith Blake put her finger on it a couple of episodes ago, when she said that she had "never before seen a show with such poor impulse control." (I'd make an argument that my hated/beloved American Horror Story edges out Boss in this category, but Blake's point is still valid.) Boss wants to be taken seriously, but it can't resist going over the top at every opportunity: it's not enough to send a messenger, they have to send a black-gloved hit man; it's not enough to have two characters engage in an affair, they have to fuck in the lobby of the Hilton; it's not enough to simply imply what's in the Mayor's head, he must either scream it at the top of his lungs—with lots of swearing—or else monologue it in the purplest prose imaginable. This show never forgoes a chainsaw for a scalpel, never trusts subtext without making it text, and is bound and determined to leave no boob unexposed.

Unfortunately, what's being exposed is that a few of the boobs appear to be running the show.