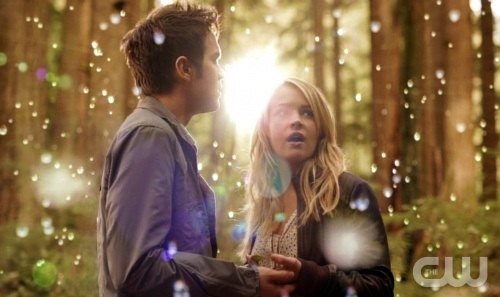 In “First Look/Last Look,” I will be doing very quick reviews of selected new fall shows, panning for gold in the fetid riverbed of the 2011-2012 network television season. While I hope this experiment yields at least one new show that I will want to add to my regular viewing—if not reviewing—schedule, I’m not holding my breath. Call me pessimistic, but, in most cases, I expect my first look to also be my last.

In a recent Doctor Who review I made a distinction between entertainment and art, but that doesn't mean there isn't plenty of room for both in my viewing schedule. I tend to only write about shows that fall on the more substantial side of the spectrum, but I'm a sucker for well-told genre fiction that aspires to be nothing more than a fun and addicting ride. Defense Exhibit A in my imaginary trial for snobbery would be The Vampire Diaries, a guilty-pleasure I don't even feel particularly guilty about enjoying. Far from being the tween-baiting Twilight rip-off I'd feared, The Vampire Diaries is short on adolescent angst, long on darkness and snarkiness and audaciously heartless storytelling. It ain't fine wine, but it's quality TV crack; it's an engine powered entirely by plot, and consistently delivers 180-degree turns that leave you reeling from narrative whiplash. ("Holy shit, did Damon really just set that recurring character on fire?")

Now The CW has paired The Vampire Diaries on Thursday nights with another supernatural teen series, The Secret Circle. The two shows have a lot in common: they're both based on novels by LJ Smith, they're both executive-produced by Kevin Williamson (Scream), and they both feature ridiculously attractive young people grappling with horrors and hormones in a small town full of secrets.

Following her mother's death in a mysterious fire, teen-ager Cassie (Brittany Robertson) goes to live with her grandmother in the coastal Washington town of Chance Harbor. (In the books, this town is apparently called "New Salem," but I guess the show's producers decided to go slightly more subtle.) Chance Harbor, of course, is just lousy with witches and ex-witches, all descending from six powerful families. Most of the adults appear to have given up magic, but the teenagers (as teenagers are prone to do) have been getting all experimental, and Cassie's arrival in town gives them a full circle to really get the party started.

Of the six kids that will form the eponymous coven, only four are really featured in the pilot. Robertson is very likable, and a natural screen presence, but her character is just blandly good at the moment: Cassie desperately needs a hint of humor, or strength, or something to make us invest in her as our hero. Our broody romantic lead, Adam (Thomas Dekker, Terminator: The Sarah Connor Chronicles) seems a little more interesting, as does his girlfriend, and the apparent leader of the group, Diana (Shelly Hennig).

But these sorts of shows live or die by their villains and anti-heroes. The Vampire Diaries has an infallible weapon in Ian Somerhalder, whose bad-boy vampire brother Damon is one of the most watchable and least predictable characters on television.  In this pilot, The Secret Circle doesn't give us anyone who promises to be such fun: it clearly intends bad-girl coven member Faye (Phoebe Tonkin) for that role, but so far she seems more Cordelia than Spike. (I'm mixing my supernatural-teen metaphors, I know. I could also call her the Fairuza Balk character from The Craft.) While appealingly bitchy in this episode, Faye doesn't actually do anything more interesting than start a thunderstorm that gives the female characters an excuse to spend a scene in wet clothes. (It's a problem with the pilot that all the magic shown is fairly boring, but hopefully that just leaves the series somewhere to go.)

There's a reason so many of these supernatural shows center around teen characters: though no one since has worked the metaphors with the sophistication or wit that Buffy the Vampire Slayer did, the intense drama of high school politics, adolescent longing, and burgeoning sexual power lends itself naturally to stories of good-and-evil, magic, and mythical destiny. (The metaphors are obvious and clichéd, but they still work: there's a nice scene here where Cassie and Adam's first, guilty kiss coincides exactly with Cassie's discovery of her powers.)

The Secret Circle will never be Buffy, but it could aspire to be a worthy companion to its shallow-but-addictive lead-in The Vampire Diaries—which, for the record, also had a similarly promising-but-tepid pilot. The cast here is appealing and willing, and the set-up (including some scheming adult witches) has potential; I won't be reviewing it, but I'll give it another couple of episodes of viewing to see if the writers find some wit and excitement to spice up the formulaic premise. I can always use another guilty pleasure.